You can only stay around Santa Ana for so long before you start to feel a little caged in. And given that Alex and Mi Pequeña Niña are here all day, every day, there was a distinct need to explore a bit beyond our bounds. So Saturday morning (yes, I know this is a little late, I’ve intentionally been keeping away from my computer this weekend) we went off in search of adventure.

This was Alex’s decision. I’ve suggested a lot, but Alex (presumably on a recommendation from her friend Rebecca, who lived in Costa Rica for a collective couple of years) suggested Saturday’s excursion. I hope to hear more desires of places to go (beyond "Arenal", which I’ve heard a few times since we arrived in late July), as that’ll give us a good chance to see more of the country.

Anyhoo, Alex chose a placed called Spirogyra Butterfly Garden (the name is pronounced "spee-roh-HEE-ra" en Español), and we headed off around 10:00, effectively skipping MPN’s morning nap. (Though she did sleep a bit in the car on the way there.)

According to Google, Spirogrya is just north of La Sabana park, which didn’t take us long to get to. Well, the park didn’t take us long to get to. I neglected to realise that one cannot actually turn to the left to run down Avenida 4 from Calle 41 (for those of you in San Jose, that’s trying to turn onto the road at the north side of La Sabana from the road at the end side of La Sabana). If you go north of Avenida 4, you end up on Highway 1.

Not what I’d planned for.

So after a 20-minute detour/return trip, we finally got back to Avenida 4, and turned down the road where Google had put Spirogyra on the map. I was a little suspicious about a butterfly farm being there, but since it’s possible to have a factory right next to a neighbourhood (zoning doesn’t really seem to exist here), I wasn’t about to be one to challenge the wisdom of Google.

That said, Google was wrong.

Leaving the neighbourhood, we ended up having to go around La Sabana to get ourselves back to Paseo Colon, cutting through the San Jose to get to Calle Central, which would take us north of the downtown, across the river, where we could scoot over towards El Pedro (an apparently defunct mall). But not far from turning onto Avenida Central (not the one right downtown, I should add — San Jose can be very confusing), we saw the sign for Spirogyra Mariposa Jardín.

We were the only ones there. No-one else came during our 45-minute romp through a black netting-covered garden that was ... well, not "filled" with butterflies, but there were certainly a number of them. A few even landed me on me, mistaking me apparently for a rotting log.

Mi Pequeña Niña didn’t seem too particularly thrilled with the butterflies, at least not as much as I thought she’d be. Pretty much any animal, and she goes ga-ga until the animal is out of sight. Insects? Not so much. Don’t get me wrong, it’s a nice place. Next time I go back, it’ll be with my SLR (at least once it’s working properly) to get all these wonderful things on film. 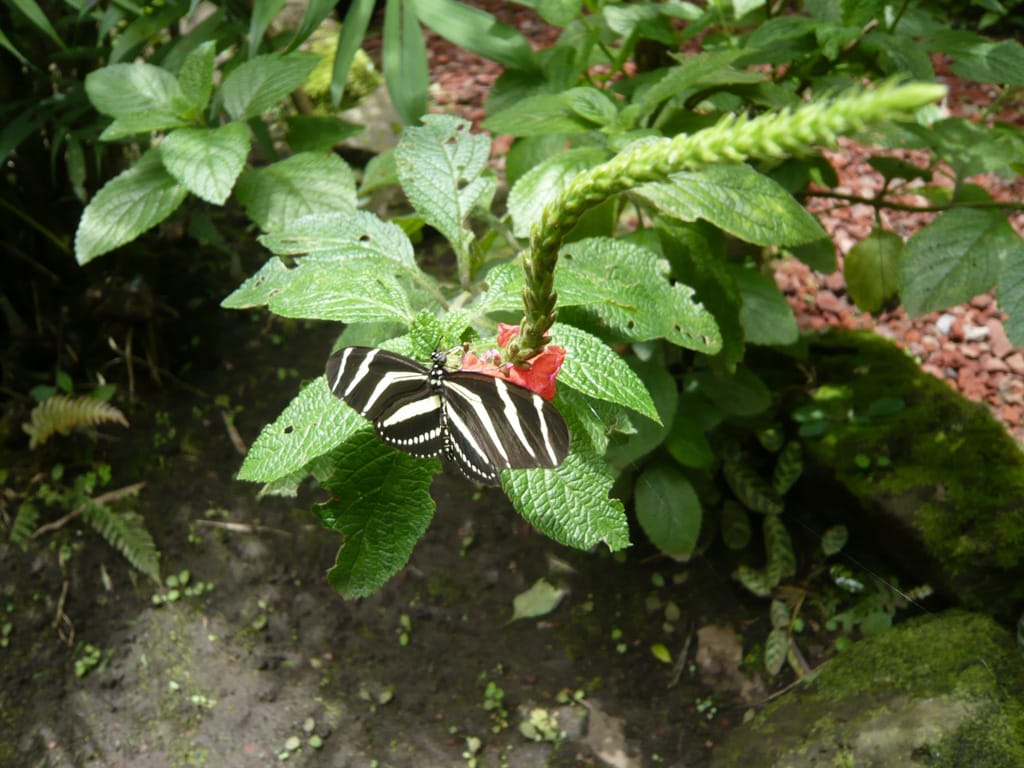 The cafe there was closed, so we decided to make a break for San Pedro Mall, on the east side of San Jose. In theory, not a long drive from Spirogyra.

Also, in theory, the roads here are marked well enough that you can easily find your way without getting horribly lost. Which is precisely what happened to us. Well, not so much "horribly", but definitely "lost". My fault, I will state for the record, as I had incorrectly made a few assumptions about direction and distance, and believed that we would cross a highway that runs along the east side. Turns out we passed over said highway and ended up someplace completely different.

Like, I can’t even find the name of the area that we ended up in kind of different. Oops.

Methinks my internal compass is screwed up. Normally, I’m not this bad.

Finally arriving at San Pedro Mall, we went in search of lunch. The usual fast-food adorned the food court, including the ubiquitous Kentucky Fried Chicken, or KFC as it’s known here. KFC is a really weird phenomenon in Costa Rica. Apparently, so the story goes, it used to be really bad. Then some American guy came down, bought the chain, and overhauled the marketing. (If you ever think marketing isn’t useful, you clearly have never paid attention to its affects.) Now it’s the most successful one. Mark, Jason, and I have commented several times on quitting our jobs and opening a few KFCs — there’s always lineups at these things!

Not wanting to eat any North American fast-food (I’m in a different country, darn it, I want something local), we went to Pollos Campaneros. Fried chicken. Tasted like KFC. Go figure.

Actually, the taste took me back to my last year of high school. In the summer, my friends and I (Stuart, Therese, Chris, James, Linda, Ali, Kathryn, Hil, Eva, and J) would go to Canada’s Wonderland for the day. The entire day. We’d be there when the park opened at 10:00, and leave when the park closed at 22:00. For lunch, we’d take buckets of cold KFC, which for some reason we were all completely fascinated with.

The San Pedro Mall is kind of odd. It has some higher-end stores, but one end of the mall looks like a run-down outlet-type configuration. There’s even a place on the lowest level that sells (reasonably accurate) Rolex, Breitling, Hublot, and Omega knock-offs. The sweep isn’t quite right, but whatever. For $150, what do you expect?

The route home I need to perfect a little better (there are faster routes through downtown), but it’s at least familiar. One of these days, though, I need to check out the fort in San Jose. It looks pretty neat, albeit totally devoid of tourists every time we’ve seen it.

This weekend coming up is another adventure. Where will this one take us? You’ll just have to wait and see...