So you’ve been around a bit. You’ve been to Costa Rica, Honduras, Belize, Hawaii. You’ve seen a lot, but are finding the same problem again and again and again — everyone else has already been there. They’ve done it, so every time you want to go somewhere, your friends are blasé about the whole thing.

I’m gonna let you in on a little secret. There’s a small country near the equator that an exceedingly small number of people go to for tourism. Business, yes. One city as part of a cruise, maybe. But visit? Hardly.

I’ll lay hard cash that when you hear "Panama", you think "Canal". It’s hard to get away from that. It’s the single most famous part of Panama, and their single largest source of income (between $150k and $200k for each ship, and over 13,000 ships pass through annually). It’s an association they will never be able to break, nor are they even interested in trying. It would be like trying to disassociate the Eiffel Tower from Paris.

An interesting fact: only 20% of all visitors to Panama actually come as tourists. The rest are all business travellers, who spend almost no money outside of their activities. (And most of those travellers’ expenses are paid for by their Panamanian companies, meaning no additional money comes into the country.) Very few people venture beyond Cuidad de Panamá (Panama City) or Colón (the Caribbean end of the Panama Canal, which has a large free trade zone and is quite popular for shopping). The rest of the country goes ignored.

Which is a shame, really. There are nine indigenous tribes still in Panama, who still live by their traditional ways. They’re all fully aware of the modern world outside, and most even have some form of homestay, hostel, or room you can stay at. The rainforest here has barely shrunk as no-one usually bothers to log a forest (there is a rainforest within minutes drive of Panama City). There are almost 1,000 bird species.

And how can you resist a hotel that looks like this: 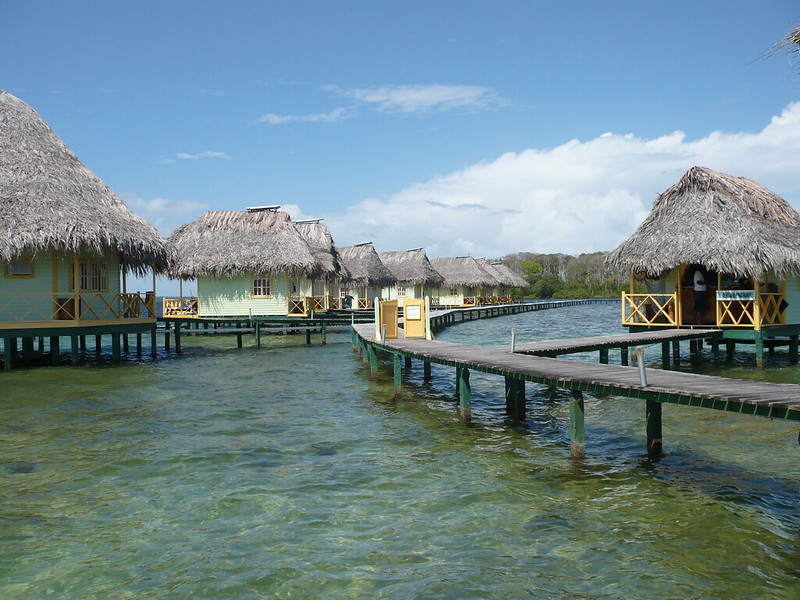 Guess how much a night? About $150/person (based on double occupancy). For a kick-ass cottage over the waters of the Caribbean. Can you go wrong?

That’s the thing with Panama — it’s still cheap. Because so few people go there, it’s inexpensive. And it’s growing. Most of Panama is still pristine (eco-tourism is probably better — more "raw" — than even Costa Rica’s), and hotels are only now slowly being built.

That’s part of the emphasis, too: "slowly". Something we learned from talking with Rubén Blades (who is the Minister of Tourism) — Panama isn’t looking to grow overnight. They know what happened to Costa Rica. They don’t want such rapid growth that the infrastructure ends up being a disaster. Panama also knows that you can’t build with the expectation of people arriving all at once — you need slow, controlled growth.

The growth is coming, but for now it’s all small numbers. Boutique-style hotels, hidden places that no-one’s seen probably for a thousand years. We joked that the only thing Panama doesn’t seem to have is a pyramid. (Sr. Blades joked that he tried to get one, but his counterpart in Belize said only if Panama would trade for the Canal.)

And then there’s the shopping. One of the weird things of Panama is that it has excellent shopping. You can find deals virtually everywhere, and can get almost anything. For example, are you looking for a Rolex Daytona? You can get them here, easily. Even in stainless steel. Saw one myself. Five year waiting list? Not if you go here, first, my friend.

We went to a mall that might as well have been from Las Vegas, for all the big name brands we saw. And I don’t mean box stores — there are no Wal-Marts, Costcos, or Home Depots here. I mean Armani, Cartier, FCUK, and Lacoste (which seems really popular here) to name but a few. And if you take the train out to ColÃ³n (a route I recommend only because the view is (probably) spectacular, and you don’t have to drive yourself), you can go to the largest free trade zone after Hong Kong. I’m told it’s a shopper’s heaven.

Want to find a super-cool place to live in an old part of an old city, but can’t seem to afford the rates in other places? Check out the Old Quarter of Panama. It’s screaming for gentrification. It’s started already, but the prices are still very low compared to other similar places in the world, and you just can’t beat that Spanish Colonial style. Besides, you’ll not only Sr. Blades as a neighbour, but also the President of Panama.

There is no doubt in my mind that I’m going back. I want to see more of Panama. Not Panama City, but the rest of the country. And I’m staying at a hotel on the water.

Depends who gets there first. You, or the rest of the world.