Last week was a rough one. It’s almost hard to believe we’ve only been here a week now. (A week ago right now, I was in the lobby of our hotel, chatting with Jason and Javier, waiting for our realtors to come and whisk us away to our condos.) Since then we’ve gotten our places, bought the things we need to make life reasonable (note: not "comfortable" — we’re still working on that), moved into a temporary office, got connected (still need cell phones), started working on new work, and had a surprising number of meetings given that there’s only four of us.

So when we got to the end of the week, we had pretty much declared ourselves "beat". Had we been a lot more set up than we are now, we’d probably have just gone home to our respective places, kicked back, and relaxed. But it’s hard to do that when you have to flag down a cab. Which you can’t here, for some reason.

We rented a car instead.

Sooner or later, you have to decide when enough is enough. Spending hours (I’m not joking, by the way) waiting for a taxi is not fun. While they’re fairly inexpensive (rarely more than a couple of dollars), it’s a colossal waste of time. As we’re all Type A people, it’s beyond frustrating.

For the record, Jason wants to be a rally driver. I’m certain of this. We’ve got some dinky white Nissan that I swear could be foot-powered for all the oomph it has. But in Jason’s hands, that think could handle the Paris-Dakar race. On Sunday, we were exploring old Escazu, and Jason was whipping up and down roads like it was a marked course. No problems at all. This guy has adapted to Costa Rican driving.

Our first task with the car? Shopping.

Yes, this was our wild Friday night. We went to the nearby Mas Por Menos ("More for Less") store for various odds-and-ends that we’re all missing. I didn’t get much (I don’t want to get much; Alex and I are aiming for a more minimalist existence), but Mark filled a shopping cart. 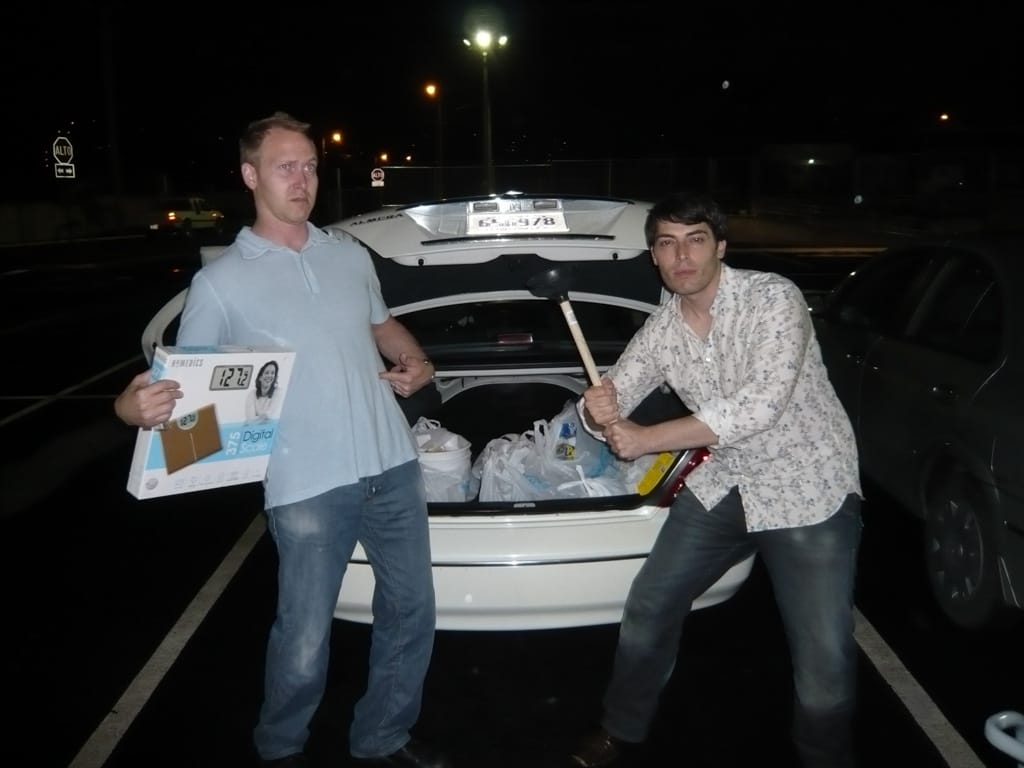 After that, we went out in search of dinner. We searched for a Tican restaurant (we’ve done gringo to death) and found a place called Yakky’s. Kind of a dive, but by 21:00 the place was packed. The food was great, the beer was cheap (Imperial is the Costa Rican favourite, and it’s about $1 a bottle — markups are really small here). For the three of us, it was only $60 with a lot of food, several beers, and Mark and Jason endulged in a little JD. I drove us home. 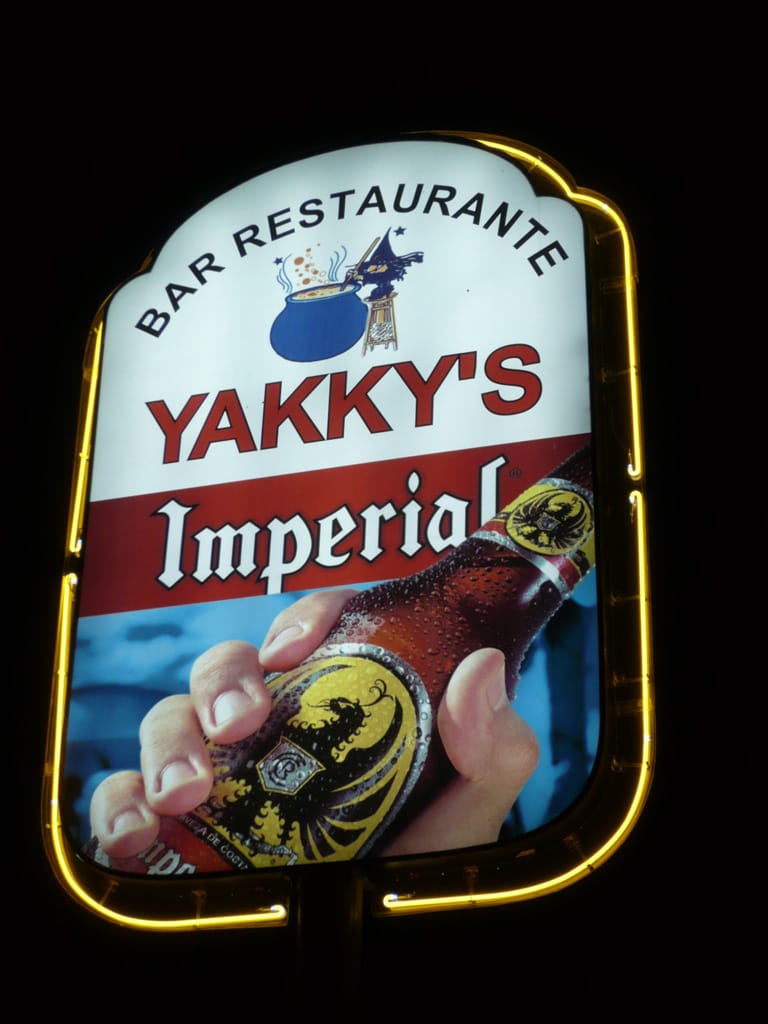 Saturday was a trip into Escazu for some shopping. We were aiming for a place we thought was called "Se Marco" (turned out it was "cemaco", which is a name of a department store ala The Bay). We found a box store called EPA, which is mostly a home improvement place. Mark loaded another shopping cart. Jason got keys cut for our office space, and we all got slop buckets and mops so we can actually clean our places. The cat hair in mine (Asia’s shedding like crazy) is getting out of hand. 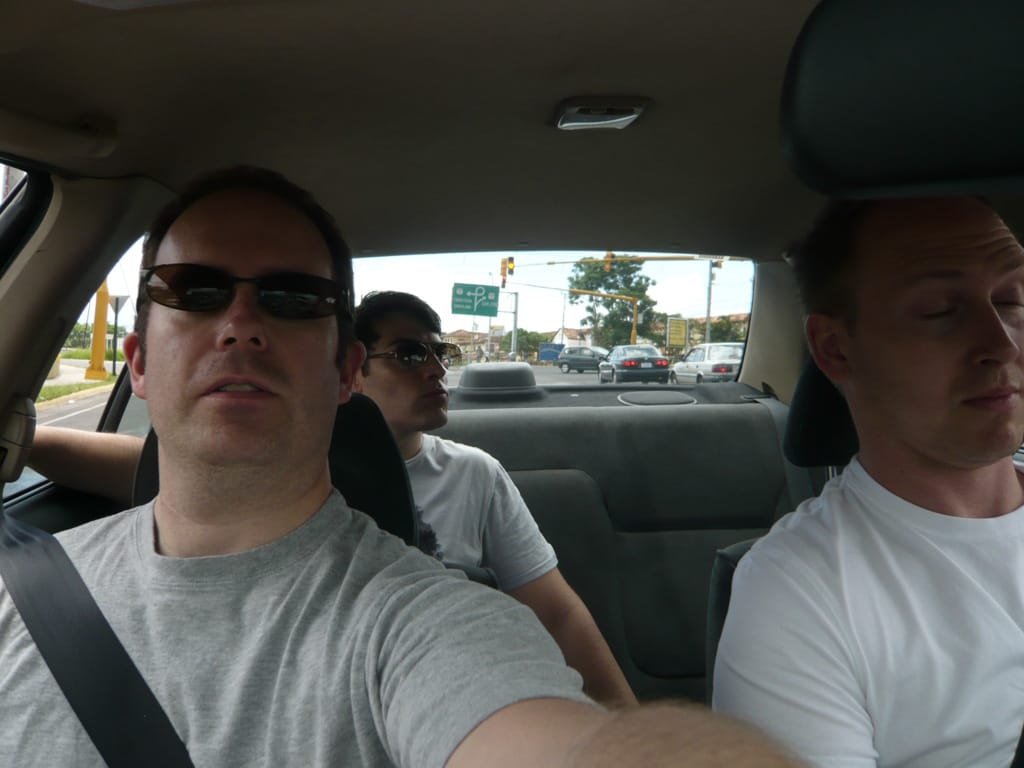 We found our way to Grau, a local chain of coffee shops. I still don’t drink coffee (I imagine it won’t be long before I do), but Jason and Mark were dying for one. I settled for a pineapple smoothie. It’s called a "batido", which directly translates to "beaten". Mixed with milk. Mmmmmm.

A trip to the mall found the real "cemaco", and also the times for the English showing of The Hulk that we saw that night. (I have to say, a surprisingly good movie.) Not far from there was Aliss, another store that has a massive baby section that Alex will love.

All the while, I should point out, Mark was searching for a french press so he could make coffee. This was almost an exercise in futility. French presses aren’t common here (yet). Unlike in North America, where you can about trip over all the Bodums, they’re a rarity even in the gringo centres. I kept telling Mark that he needed the Costa Rican method of making coffee, but couldn’t remember the damn name of it (Chorreador de café), nor easily find it.

Something I noticed as we went from store to store to store. The Euro Cup was playing on virtually every set. Everywhere we went, eyes were glued to sets. Football ("soccer" to us heathen North Americans) is second in importance only to the church. I think it even eclipses family when it comes to certain games. You really need to pull a sales guy away from the game to get his (or her, but they’re usually male) attention.

We ate lunch in likely the last Chichi’s restaurant on Planet Earth. Might have been the prototype, too. Despite the disappointment in realising it was a restaurant chain, it was actually pretty good. Possibly the best fajitas I’ve had, actually.

Sunday was notably quieter, with really only our excursion into old Escazu being a notable point. In fact, Ihad to work on a priority item for the Toronto office. It is nice to be wanted, though. Tricky part is the lack of connectivity at home, still. Weak internet means no phone or means of communication with the outside world. It’s a bit of a nuisance, admittedly. But slowly, adjusting.