Well, we’re into Day 2 on our Iona Community experience. Thus far it’s been ... well, chilly. The weather here is reminiscent of something we tried to leave back home. Only windier with the sea dampness to add to the chill. Walking about is a little hard right now, so I haven’t been much further than the abbey itself.

So far, the Wee One has been a joy to travel with. The flight was trivial (compared to what we feared), and by third day had effectively adjusted to the time zone. (I think there might have been a faster change, had it not been for all the travelling on the second day.)

The train trip from London to Glasgow on Virgin was wonderful and exceedingly prompt. We even arrived nine minutes early — Allen surprised us at the station. I hadn’t actually expected to see them until Oban. The Glasgow-Oban leg of the trip was very picturesque, although the Wee One was getting pretty darn cranky about the trip at that point and made sure the two-car train knew it.

Oban is a nice place, but didn’t really get to see much beyond the esplanade and the Tesco. With luck, we might see a bit more of it on the way back. We will see.

The Iona Community is an interesting thing. It operates at the abbey, so we actually become "residents" for the week we’re there. That includes serving food and cleaning. I got the bathroom floors. There’s also a priority on worship — I think I’m going to try hide in the library as much as possible.

We’re always cold. The Abbey is 14th century, and fibreglass wasn’t really known at the time. Windows are single pane, and you always hear the wind. (The Library has gaps in shutters right to the outside.) Most everyone wears a jacket all the time. But the food is good and the people are very nice — they seem to have taken our child as a mascot of sorts, it seems. They rub for good luck. A mini Buddha.

We’re here until Friday, then off back to Oban then on to Inverness. I hope I get to see more of the island, but the wind has to die down first. I’m losing ideas in the gusts... 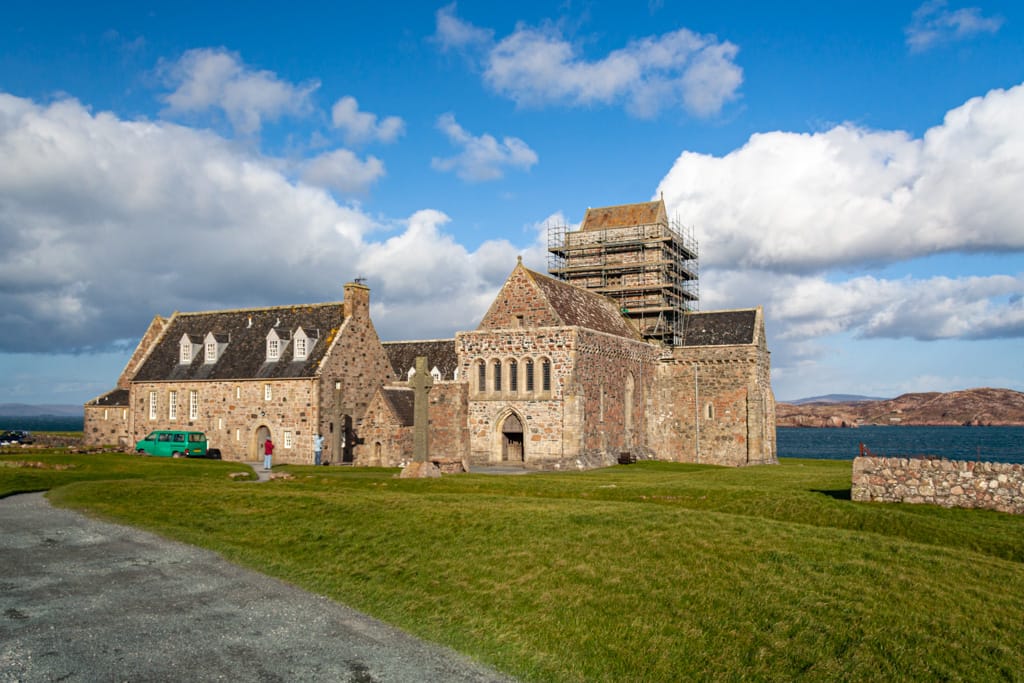