Day 2 got off to a lousy start. I was sick. Nastily so. At first, I thought it was a hangover (I might have had — perhaps — one beer too many last night). But I realised very quickly that this was not, in fact, a hangover. I’ve had my share of them, I know how they affect me, and I know how to handle them.

This thing — whatever it was — knocked me flat on my back and sent me back to bed for the rest of the morning. Fortunately, I didn’t feel like I missed too much.

The day was spent completing the tasks from yesterday, and working to our department strategy. That meant debate. And a lot of it. But when you’re changing the way you work, you’re more concerned with change, rather than status quo. Still, it does raise blood pressure in a few.

At the end of the day, we started to try define the qualities and responsibilities of Technology Directors. It’s harder than it sounds. Especially since those of us who are Technology Directors have found that we don’t always see things the same way. It’s why Cory and I proposed the exercise in the first place.

Afterwards was the Technology Lead event: we got to go see Da Bulls. (That would be the Chicago Bulls NBA franchise, in case you completely missed the late 1980s of Saturday Night Live.)

I’d never been to a basketball game before. I wasn’t sure what to expect, and honestly believed that I wouldn’t really like it. I’m not a sports nut. I like hockey, and I used to love baseball, but I don’t really follow sports in any appreciable way. My last stint at a football game was underwhelming (I left the game early), and wondered how bored I’d be at this one.

Turns out that you don’t get the option. The game is — likely due to television contracts — very ADD-oriented. Every so often (likely about the time of a commercial break), they game stops and there’s dancing (the cheerleaders went through three costume changes), games (Benny the Bull — the Bulls’ mascot — had his birthday and several of the other NBA mascots came out to celebrate), random t-shirt throwings, and these weird little CG "races" on the JumboTron.

All at the same time.

No, I’m not kidding.

It was hard to figure out what you should be looking at. It was almost confusing. 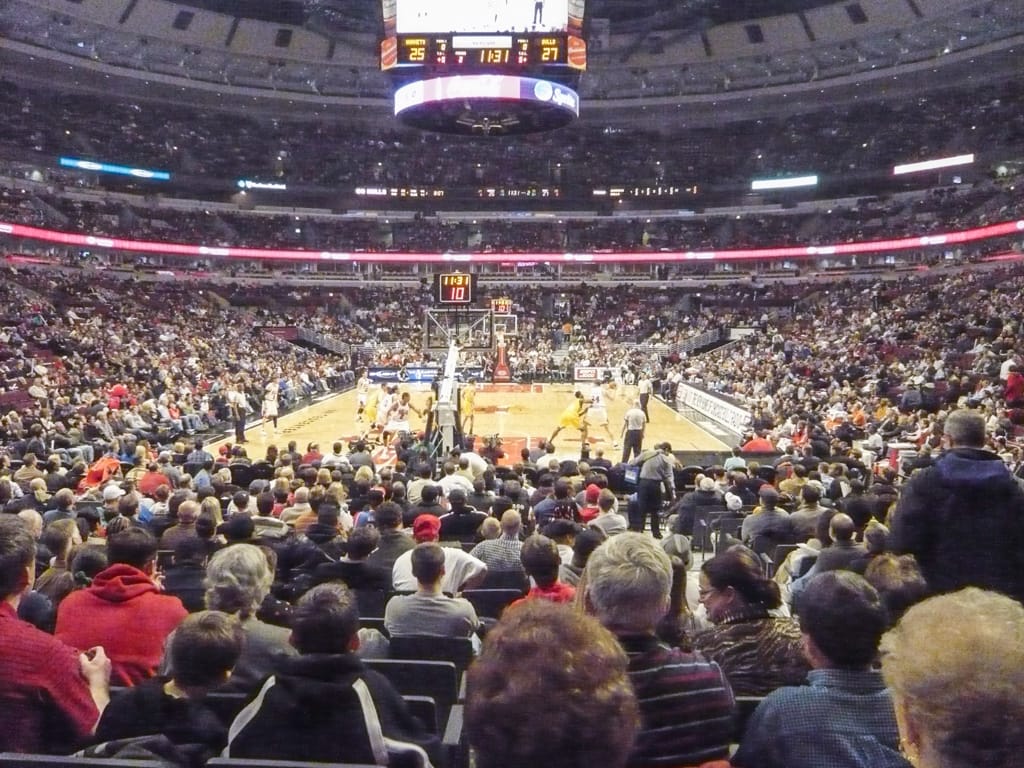 But — I’ll give it this — it was entertaining. The Bulls lost, but it was easy to miss that fact.

Afterwards, we had to figure out how to get from the United Center back to our hotel. Easier said than done. Couldn’t find a taxi. Anywhere. And when we did, they were all taken.

The 11 of us traipsed down West Madison, Bill nearly freezing a jacket not made for the cold weather (he had literally flown in from Costa Rica and had not planned on such frigid temperatures) and all of us sliding around in the slush and snow (Chicagoans appear to not want to shovel walkways or sidewalks).

Aside from a 1.5 hour stop at the Third Rail bar to "warm up", we walked most of the way back. Scott, Allard, Sep, and Joe were the first to bail out when we finally saw a cab. Bill, Torin, Johnathan, and Cory took the second cab a couple of blocks later. Dave took a cab (he had a long way to drive home). Only Reid and I walked the entire way back (his apartment is barely a block from the hotel).

And now, to bed. It’s been another long day. Looking forward to going home. I have a pair of babies at home that I miss dearly.