Part of the renovations include some changes to the electrical system. As you’ve probably already read, I’ve torn out large chunks of the wiring in the basement. I had to — it was quite the mess.

The electrical panel also needs moving. It’s in the middle of what will become the shower. Realistically-speaking, not a good place for high-voltage.

I was going to ask my brother-in-law Craig to give me a hand, but given the timing that I’m under, using Craig turned out to not be really much of an option. It would have taken a few weeks to arrange the time, and there would be other ducks that would need arranging.

As much I didn’t want to, I had to get a contractor.

It took a while to get the electrician scheduled. In Calgary, getting good people isn’t easy. I’ve been lucky so far, but this was my first major setback. Four days. On the bright side, I can’t really do much in the house right now anyway, given I have to wait for concrete to come in to cover the heating pipes. 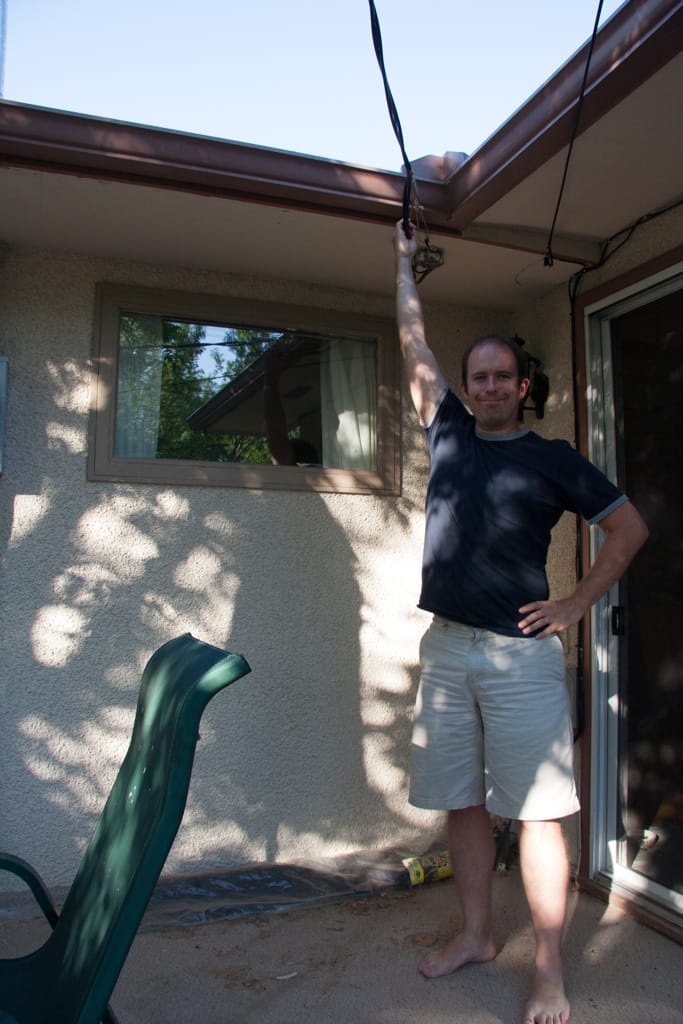 [Ed. note: Never do this, folks. I could feel the vibration in the line from the electrical. This could have been a hospital visit ... or possibly the last thing I ever did.]

Right now, standing on my deck, it’s just an easy reach overhead. Not a safe place. So we need a mast installed on the roof, and some minor trimming to the tree. All of which I don’t mind in the least.

Today, I came home to find a slight change. At first, I thought nothing had been done, despite having talked with the electrician on the phone. Then I noticed bits of concrete on the floor. I looked up to where the ceiling meets the concrete wall — lo and behold, there was a hole.

A hole that lead into an electrical conduit. That went outside, up through the deck, up the outside wall, through the soffit and roof to become the mast. There’s even a box for the new meter.

Not the most attractive of things, but a hell of a lot better than what we had. And safer.