My friend Kathryn got married this weekend. A truly wonderful event that forced my hand to leave the comfort of my familiar Cowtown (and miss the opening of the Calgary Stampede) to visit rural Ontario and experience the joyous event.

I gotta say, probably the most relaxful weekend I’ve had in ... well, a really long time.

It started with a fairly hectic departure on Thursday afternoon. Alex drove me to the airport, I had to run out to a flight, which although I made with a bit of time to spare, ended up being late no thanks to the caterers. (In other words, less food on the plane than there should have been.)

And although I flew Air Canada — perhaps my least favourite airline — I had a really good experience. I was pleasantly surprised. Still, I’ll fly WestJet because I like it. Arrived in Toronto, checked into the airport Sheraton, and had a good night’s sleep.

The following day, I picked up my rental car, and proceeded to drive out to Beaverton. The Ford Focus has been a decent car, though I don’t think I’d run out and buy one. It’s okay, but far from perfect.

The drive took my through stomping grounds not trampled in many years. I turned north in Whitby (having accidentally gone as far as Oshawa) up Highway 12.

As soon as I felt I was out of the urban area, I turned off the air conditioning, rolled down the windows, and turned my iPod to play nothing but The Tragically Hip. It’s been years since I did this. I’d been thinking of it for a couple of weeks, and it was a thoroughly liberating experience to blare over 15 years’ of music as I blasted through the plains of rural Ontario. How I missed the experience.

Along the way, I found a few abandoned rail lines (I need to figure out which they were), back roads, and small towns I’d never been to (or through). Beaverton itself is a rather interesting little place, and the sort of place you would buy a small cottage for weekend (or summer) escapes. This is where Andrea’s parents have retired to, though they’re not even in Beaverton proper, prefering more remote locations. 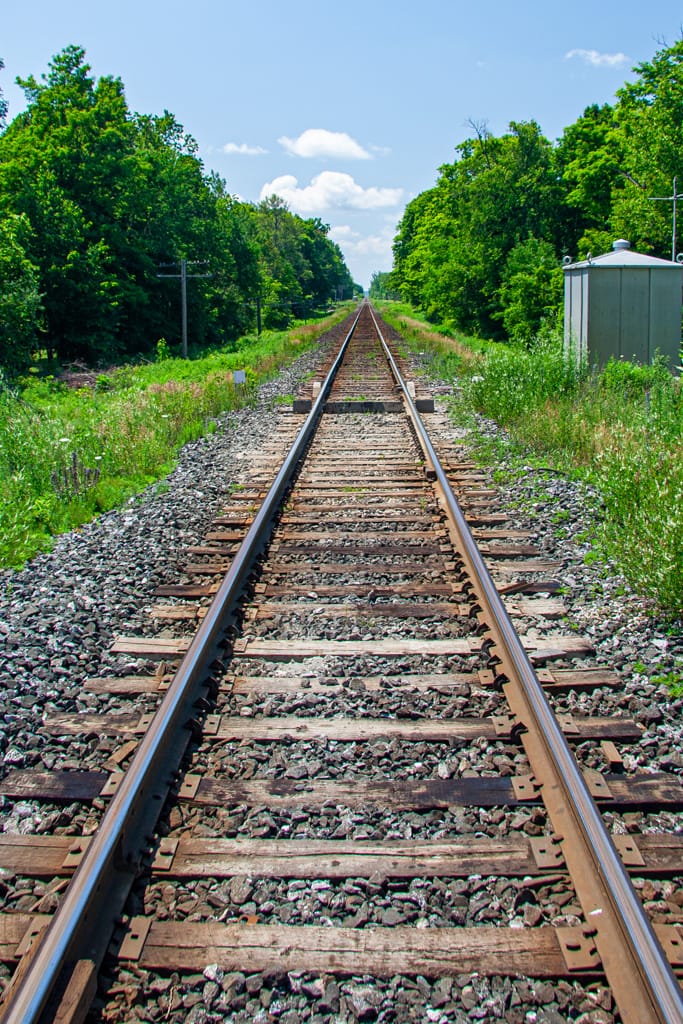 I actually got lost finding the place. Well, not lost per se, but I definitely overshot where I needed to be by 15 clicks or so. Rather embarrassing for someone who would normally pride themselves on knowing where they were and where they were going. (See, hon, I’m saying I was wrong. Take note of this!)

Imaging driving up a corduroy road. Weeds standing shoulder high. No ferris wheel rusting off in the distance, but there’s not much else. Suddenly, there’s a break in the bush at the side of the road. The path is full of stones turned white from age and abuse. It looks like danger to go down it. At the end is a clearing with a gorgeous brick farmhouse, manicured lawns, and enough clear cut grass to park cars.

This is where all the fun took place. And it was only as I came into the yard that I realised something I had not thought of before:

Would I know anyone there?

It dawned on me that aside from Kathryn’s family — who barely recognised me in the 12-odd years since I last saw them — I didn’t know anyone. I was one of the oldest friends Kathryn had there. If not the oldest. I feel old just thinking about it! But as I talked with Maureen — Kathryn’s mom — I spied the names of Gerry and Sam, mutual friends whom I’d met through Chris years ago. (Gerry and I had done a trans-Canada trip back in 1997, and I went their wedding in 2001.)

At least I wasn’t alone.

Although I was uncomfortable in the heat (not as bad as Paris last summer), the ceremony was wonderful, the food excellent, and I had a great time catching up with my old friends. It had been a very long time since I’d had a good chat with Gerry and Sam. Just made me remember why I like them so much. 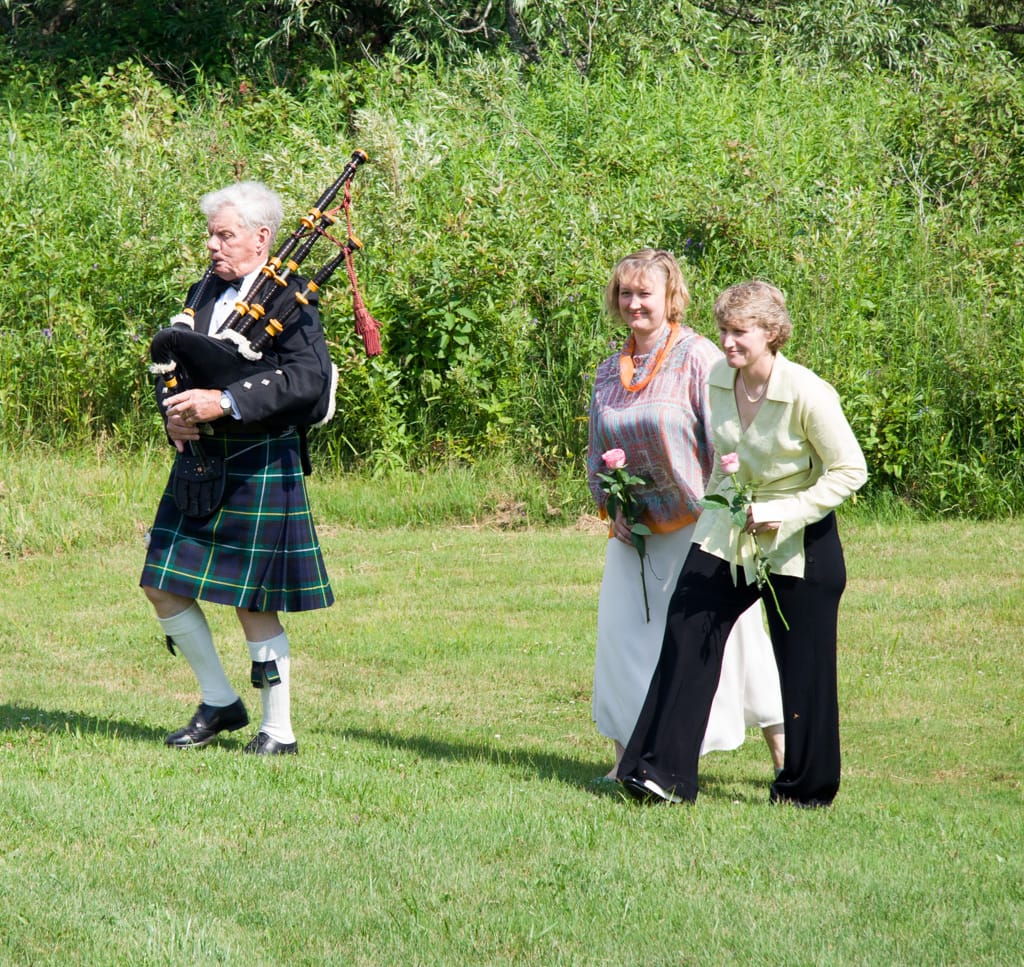 The night carried on and soon dinner was over, the dancing begun, and the mosquitoes were out in swarms. We lathered up with repellent to prevent severe blood loss, but even that wasn’t enough for some.

I met up with Marika, Kathryn’s friend for many years [[Kathryn comes for a visit|whom had stayed at Chris’ and my apartment back in 2001]]. She in turn pointed out Bryce, whom I’d met the night of the Camelot show. 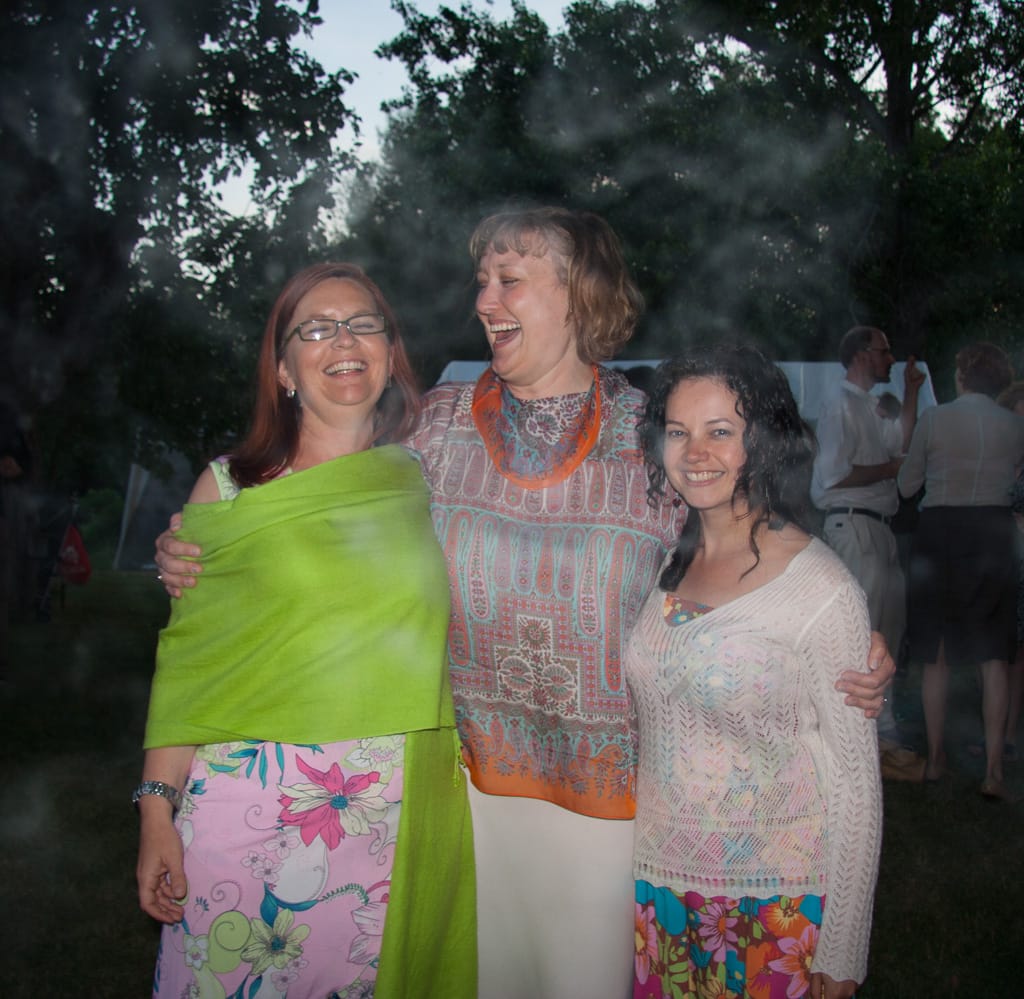 I had to leave around 22:00, as I still had 90 minutes to drive. I wasn’t going back towards the airport, but up to Huntsville to hang out with my family for the rest of the weekend. (I figured I had to make the most of the time.)

I said goodbye to Gerry and Sam, which seemed such a shame — I rarely get to see or chat to them and leaving so soon just seemed so wrong. I was sorry to say goodbye to Kathryn as well, since I’d barely had a chance to talk to her. I wasn’t the furthest away to come (Marika beat me — she came from Vancouver), but it’s still hard to see someone only a short while.

The drive up to Huntsville was punctuated by road signs I could barely read, drivers who seemed to not know where they were going, and the need for high beams so I could see in the intense black of the northern Ontario night. At the end, Craig was waiting for me with a beer.

In a weird way, it was sort of home. In a very confused, fast-paced, intense, and long-distance way, that is.