Team building is one of the important things you have to do when you have a group of significant size. Especially when they’re of different specializations and tend not to intermingle regularly.

That is what brought us to Canada Olympic Park (COP) this afternoon to experience a truly unique feeling. Basically, screaming death at 100 km/h. (It was supposed to be golf, but the killer rainstorm we had earlier this week washed us out.)

COP’s big claim to fame is winter sports: downhill skiing, the half-pipe, the ski jump, and the bobsled course. It’s in Calgary city limits, and (supposedly) one of the best places to learn. It ain’ t the mountains, but is better than a lot of what Ontario has to offer.

Problem: What do you do when there’s no snow on the ground, during the remaining the second half of the year? You do what COP did — put in extensive (and rather insane) mountain biking trails, offer a variety of activities (you’ll remember that Critical Mass did a summer event there a few years ago).

This year, they added a zip line.

A zip line, in case you’re wondering, is a steel cable erected between two points upon which a person can hang, and glide in between. Zip lines are popular in the moist jungles where canopy tours make extensive use of them. While we don’t really have any canopies in Calgary, they’re still a hoot.

We all crammed into a school bus and headed out for our date with a long drop. Along the way, we played a little game: what order were we going down in? Steve K. won the contest — an inadvertently ended up being the first person who would go down. He then chose the next person — Dan. Dan wasn’t on our bus, though, so he then chose Jason, who chose me. I chose Erica, just to be a jerk.

Arriving, we signed what I refered to a standard "CYA" form. This would make sure COP wouldn’t be held liable in the event any of us were injured. Given our collective mental state, this probably wasn’t a bad idea.

We split into two groups for the trip down, each of about 14 people. This was to help spread out the use of staff and equipment a bit. (As we would find out later, we’re the largest group they’ve yet had, and maxed out their entire setup.)

The setup is pretty simple, really: a parasailing harness, a heavy-duty "trolley" (a heavy welded aluminium frame with nylon wheels for gliding down the cable, with thick wires leading to a two-piece cross bar that had strong nylon straps that connect to the harness), and a helmet with a short visor.

Strapped into the harness (which rode up something fierce), we strode over to the first of the three zip lines — the training line. This ran right at the COP main building. A drop of five metres over a length of 20 metres, it wasn’t much, but enough to instill the basic principles of flight:

The first trip down was fun, and gave you an idea — a fleeting idea — of what the full trip would be like. The landing was into a series of springs that locked the trolley in place, and let you swing a bit to disperse the rest of the kinetic energy.

From there, we piled on a bus, drove all the way to the top of the hill, and climbed in an elevator to the third floor of the ski jump. This was for the Monster Line. This runs effectively the full length of the ski jump course. Maximum landing speed recorded: 73 mph (meaning a top speed of almost 90 mph). 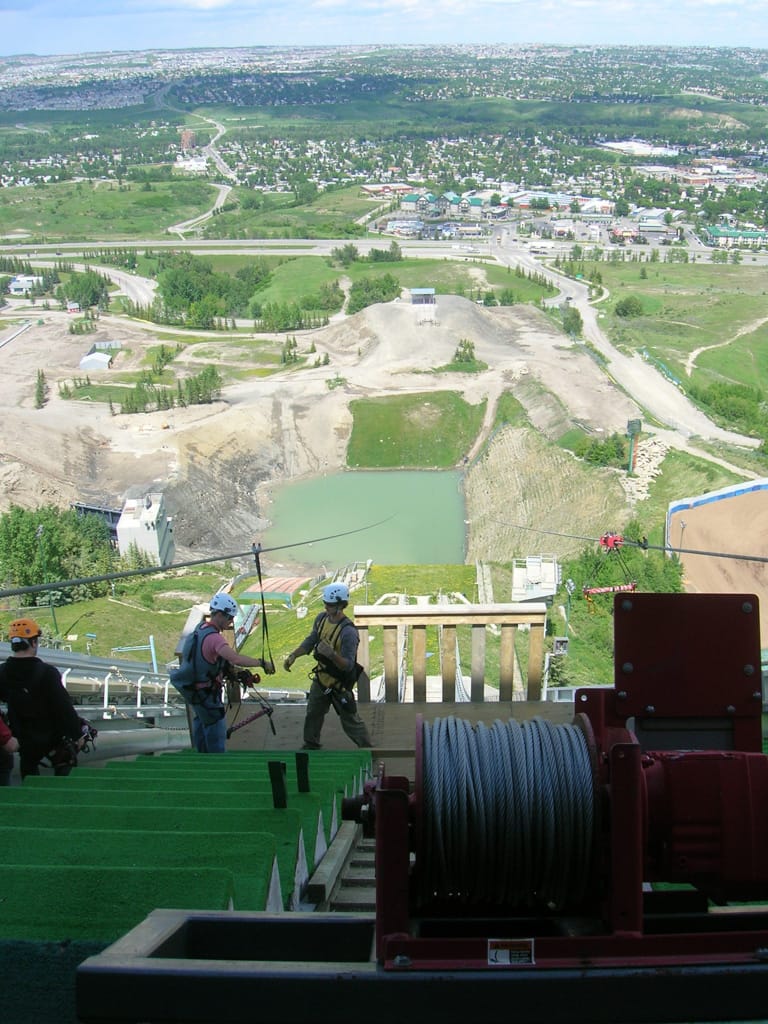 At the top, we were given a couple of quick notes, like staying away from the cables (due to recoil). Steve K. and Dan were then taken down the stairs to the launch point, while the rest of us watched. Dan ended being the first to go. I recorded video of the launch for posterity. In it, you can hear:

“Is that Dan screaming or is that the pulley [trolley]?”

Jason and I were up next. I was excited to give this a try, but opted to play it more frightened. It’s funnier that way. Looped into the trolley, I held my position until the attendant unhooked the safety, reminding me to stay in starfish the whole way down, putting my arms onto the crossbar when I reached a set of trees at the bottom.

Then I was off.

Acceleration came quickly. Air was rushing past my ears, the ramp of the ski jump vanished below, soon replaced by the steep hill and a landing area currently filled with water. I pretended to run in place as I sailed along. There wasn’t even the hint that this might be remotely unsafe. The trees approached on the right, and I went from starfish to bracing myself for landing. I could see the end of the line appearing, the bright orange padding bag signifying the end of the line. 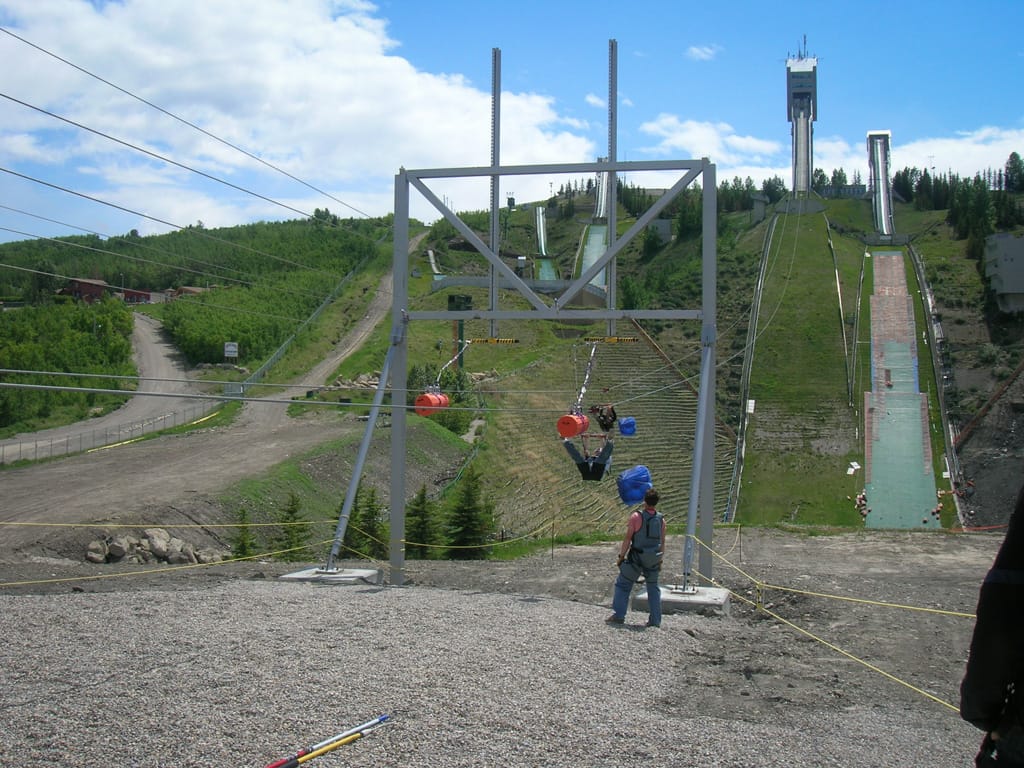 Next thing I know, I was hanging at the end, my head ringing. It was only then that I realized I’d forgotten one of the rules: lean way back. My head had slammed into the cross bar when I decelerated from 35 mph to zero in about two metres.

That’s me, taking the lead, showing people what not to do. Everyone else at the top was reminded to lean way back at the bottom from then on. 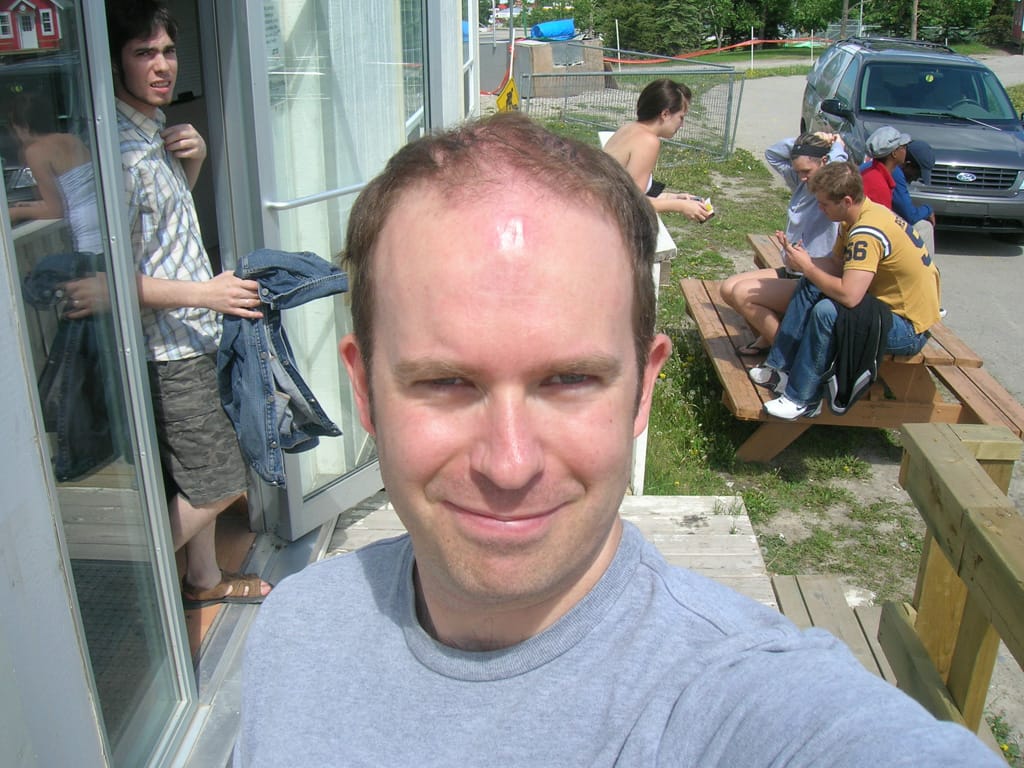 I have to admit, being at the bottom, watching the impact was something quite spectacular. I was amazed that I wasn’t more injured from the impact — my forehead was only merely stung, and not even hurt. The band holding the helmet to my head was leaving more of a mark than anything else.

Following the Monster Line, we took the return line, a shorter but still fast drop back to the starting point. This I did properly and didn’t hurt myself, although the landing had me giggling quite a lot — the springs ricochet the rider quite a lot.

When were all back on the ground, we headed over to the lodge to do something we all excel at: drink. It was a chance for all of us to chat about our own experience, and about other stuff in general. As usually, we rarely actually talk about work, although it might sound work-related.

The day ended with us returning to the office, and heading out for a wonderful weekend. I will gladly sail the line again … and next time lean back.