Ah, Christmas! That time of the year when the happy cries of children resound through the neighbourhood, gingerbread wafts in the air mingled with the scent of pine, and angry shoppers wield heavy weaponry to acquire the hot toy of the year for their spoiled and ignored kids.

Yeah, I’m still bitter about the over-commercialization of Christmas. Decorations should not be seen until late November. Christmas music not until December. Same with all the adverts on TV and radio — please restrict those to the appropriate month? Half a year is a little much in some cases. It’s not that I don’t like Christmas — I love almost everything about it. What I want is for it to remain special. If we have Christmas for most of the year, it becomes as common as Wednesdays, and we know how much fun your average Wednesday is.

My tasks were much simpler: clean, arrange (and purchase extra) lights, move some furniture, and carry a tree about a half kilometre (easier than it sounds, trust me).

Everything began on the Saturday. We were having guests over on Sunday and wanted to have something ready for all to see and experience. Now I freely admit that I’ve not been putting in my part for Christmas preparations this year. Work has kept me very busy and trying to do all the home-related stuff has been ... well, let’s just say that if I weren’t married, nothing would be done.

Cleaning is always the hard part. We’ve both been so busy (me at work, Alex covering for me) that the house has slid into a state of minor disarray. And by minor, something just less than New Orleans after Katrina. Just without the flooding.

Space had to be made for the tree as well. We wanted it in the window this year (like in A Christmas Story, but without the lamp), which meant the couch had to be moved. The entire thing was spun about 90 degrees clockwise and shoved a few metres north. The dining room table had to be rotated 90 degrees to make for easy walking around.

We got the tree at the Calgary Farmer’s Market after breakfast on Saturday. A lovely Fraser Fir that not only looks great but has the most definitive "Christmas tree smell" that I’ve ever encountered. Can’t go wrong with that.

While the branches dropped, we dealt with lights. Alex went through a few variations inside while I wrestled with the outside lights. I was previously a purist — if the light wasn’t incandescent, it wasn’t alight. I didn’t like the LED lights. They seemed ... odd. But after wrestling with a mini-light set for 45 minutes to find the three burned out bulbs, I’ve converted. LEDs don’t burn out (easily). And they use way less electricity. 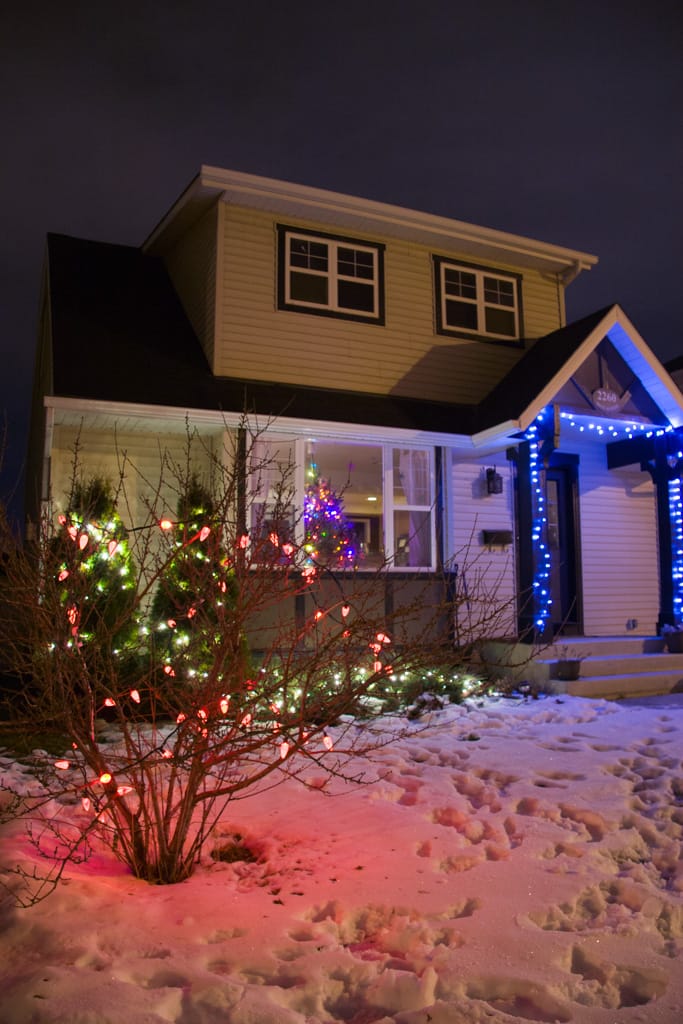 I’m almost in Christmas mode now. If I can concentrate less on work, I might actually have a good time this year.