Chris arrived on Sunday afternoon. The surprise went down on Sunday night. While over dinner, someone wondered if we were going to have a game night.

Dummy me, I’d never thought of that.

Years ago, when Chris and I used to live downtown, we used to have game nights. We bought a Sega Dreamcast and a Sony Playstation 2. We don’t have a lot of games, but the ones we do have were good for getting people together and playing against each other. Most of the games we have are Japanese — ones you can’t get in North America. (You can’t get them at all now, but even when they were on the market, they weren’t sold in North America.) Games such as Rival Schools and Powerstone 2. Then there’s the heavy duty fighting games like Soul Calibur.

None of these I particularly like. I’m not a fighting game sort of person. I’ve generally prefered single-player games. (Yes, you can joke about this all you want.) Gimme the old-school games like Doom and Quake, and more recent ones like Grand Theft Auto. Mano-a-mano scenarios never really appeal to me too much. MMORGs like World of Warcraft are ones I tend to avoid.

The nights were almost legendary. Fifteen, maybe twenty people all crammed into our living room, jostling each other, taking turns in the trash talk and game play. We’d start after work on Fridays, and the action would go on until early in the morning. We were loud. Very loud. I’m amazed to this day that we never once got a noise complaint — or the cops showing up at our door.

Thankfully, a basement in a detached house is a lot more soundproof than even a concrete apartment. Even if the room is a lot smaller.

For a brief moment, it was like old times. Different place, but the old same faces, the old same habits. Most of the skills had gone rusty over the years, and indeed different people won than could have won four and a quarter years ago. It’s hard to believe it’s actually been that long, that long since the Asian Brother Crew got together in such merriment. A reminder that things change and time passes. It’s saddening and happy at the same time. 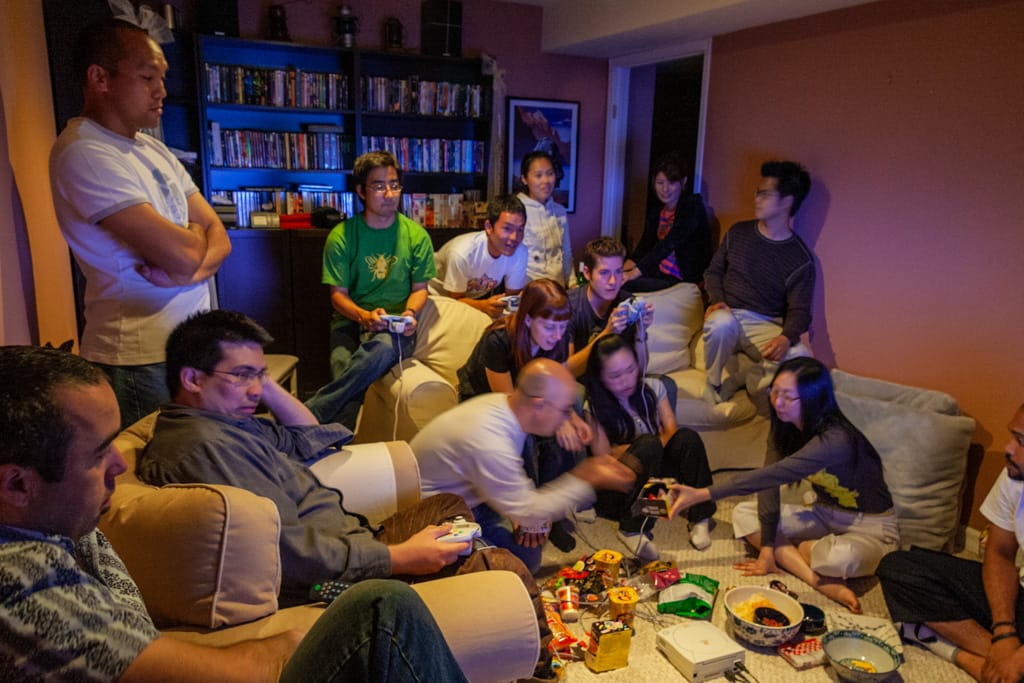 Pizza. Fresh-baked oatmeal and butterscotch-chip cookies. Potato chip flavours we would never normally think of eating. Round robin matches, with much victory and loss. Some games that would no longer load (ages defeats us all, it seems).

Virgil left shortly after dinner. The others held out for much longer, but it was a school night, and people were due to leave before too long. The gaming slowed, and the waves of departure began. Two people here, three people there. Soon, it was just Chris, Kaz, Alex, and myself.

I slept poorly. It was over. As I had thought would happen — I blinked, and the time passed.

This morning, I gathered myself to go to work. Chris and Kaz met me at the door as I prepared to leave. I hate saying goodbye. But I had to go to work, I had a scheduled client call at the time I would normally have taken them to the airport. Ironically, the call was cancelled.

Chris is on his way back to Japan. With luck, our paths might cross again next year. But it will be increasingly more difficult for this to happen. Though I really want to go back to Japan, I’m not sure when that might happen again.

But it will happen. That I am sure of.