Two major things happened this weekend. My friend Chris came to town for a visit! But more on that in a moment...

Gary and I had grandiose plans about setting up a dragon boat team at the office. But the plans never materialized (we simply forgot) and due to a reshuffling within the Topmade Dragon Boat Club, the team I was on last year was not rostered this year. I was left teamless, and I wasn’t too keen on signing onto a new one. So no dragon boating for me this year. That didn’t stop Alex and I from biking down to the North Glenmore Park to drop in on the festival this weekend and see how it was going.

We arrived just after noon, and immediately noticed something. We were spectators. Amazingly obvious, I know, but there’s an important point to that: no adrenaline. It was almost boring. There was nothing to keep us truly interested. We chatted with Colette, who was revelling in her team’s 2:06 time (one of the fastest that day); we watched a couple of races (and watched Arnold, our former coach, guide a team whose boat capsized back to shore), and wandered through the thin array of shops before heading out. 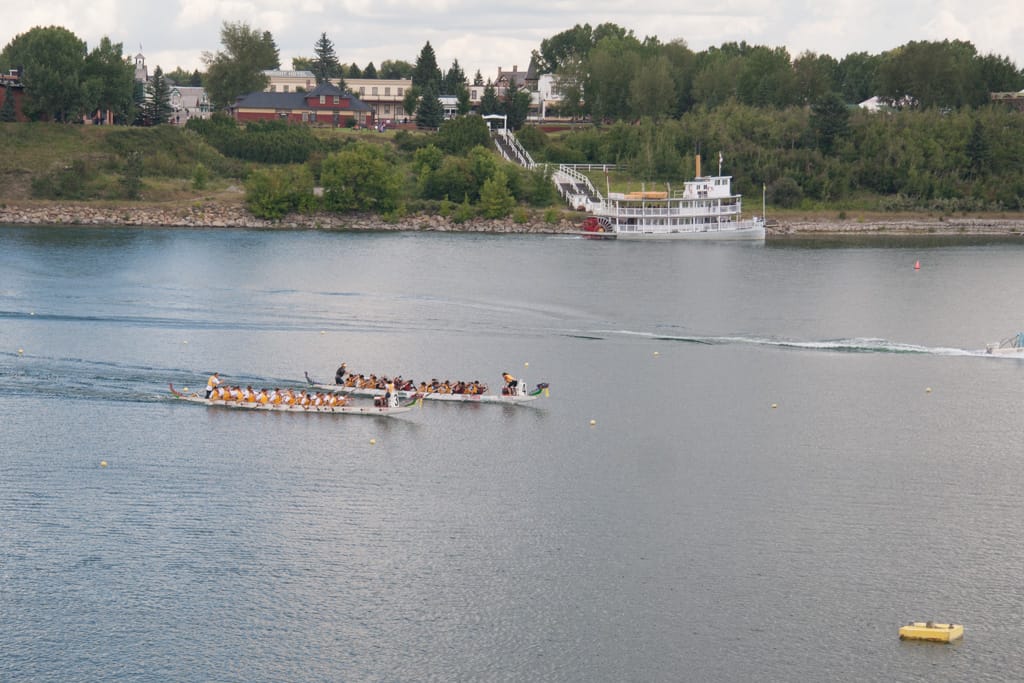 Our primary goal was actually the Glenmore Reservoir. Or more importantly, biking around it. I had always thought that the reservoir was a joke — it’s a small lake, and something that one could do in about 20 minutes. Not worth the time. Or so I thought.

You have to go west from North Glenmore Park over to the Weaselhead Flats, where the trail goes right through the nature preserve there, crossing the Elbow River. Then around the south side of the lake through stands of birch and tamarack trees, skirting the edge of the Tsuu T’ina nation, which occupies the southwest corner of Calgary.

The whole time, we were trying to avoid getting rained on. As is typical of Calgary, the formerly sunny day had shifted very quickly to cold and rainy. We got to the Good Earth Cafe in Glenmore Landing before we got too wet, thankfully. Emerging as the rain passed, we continued through Heritage Park and up to Rockyview Hospital. There we could see the dragon boat races from a distance. We arrived in time to see the 1,000 mixed race. I shuddered at the thought of having to run that long. Sang and Mark had joked that we should join them for the race.

The next day was marked by a breakfast at the Calgary Farmers Market, a glorious five-minute walk from our home. We stocked up on food in preparation for our houseguests, arriving that afternoon. After a quick wipedown at home, we headed up to Marda Gras, a nearby street festival. We stayed long enough for a pass up and down before running to the car and off to the airport.

It wasn’t hard to find Chris, despite all the people waiting for AC 173’s bags to appear on the barrage carousel. (Calgary Airport is getting slower and slower every day, I swear.) He’s the only black man in Calgary at the moment, I think. Kaz was a bit harder to spot — she blends in better, but Chris managed to point her out to us.

Chris and Kaz’s arrival was a secret. Only Teak, Jordon, Alex, and I knew that they were here. Chris wanted to surprise the Asian Brother Crew, the group that used to all hang out in our apartment downtown. The plan was to have everyone gather at Silver Dragon. Teak had been egging the group on all week about an "important announcement", which everyone wanted to hear. (The speculation, which I helped fuel, was that Teak was getting married, or even more of a shocker, had gotten a girl pregnant.) It was all part of the fun.

We arrived very late — 30 minutes after the prescribed time. Alex and I took our seats at the table, and Teak went into a prepared speech. Chris and Kaz waited two minutes downstairs before making their appearance. Teak went through his schtick too quickly, and had to adlib until Chris and Kaz appeared. Half the table shrieked. The other half feined surprise. Tamara cried. It was a great reaction.

And we ate way too much.

Chris isn’t here long, just until Thursday morning. Three and a half days. And I’m not going to see him much because I have to work. I’m going to blink and he’ll be gone again. It’s hard seeing your friends for such a short time, especially when they’re coming from such a distance. We’ve managed to see each other every year for the last four years. I don’t know what next year will bring, but I suspect it’ll be a long while before I see him again.