Free day. I had some variety of grandiose plans for today. I was going to see so much of Paris that I’d be actually tired of it.

That had been the plan. What I hadn’t planned on was how tired I was going to feel when I woke up.

That was 9:00. Ninety minutes after I’d hoped to get up. I was already well behind schedule. I skipped the shower, dressed, grabbed my camera and French-English pocket dictionary (just in case) and ran out the door. I went down a very narrow street a block away from Rue du Rivoli until I got to Rue du l’Amiral de Coligny. I headed down that road directly to the Louvre, my first stop of the morning. (My first stop was supposed to be Notre Dame, but I figured it would wait until the next time I was in Paris.)

I was supposed to zip in, see the Mona Lisa and a couple of other works, then run off to the Musee d’Orsay. As it stood, I went in through the Pyramid (and the metal detectors and x-ray machines — it’s like walking into an airport) and stepped into the lobby where I would make my purchase and devour the great works of art. I instead chose to go through the massive underground mall that exists, heading west, and emerging at the edge of the Tuilleries. The Louvre would wait for another time.

The Musée d’Orsay almost got the same treatment. But it had two things going for it. First, it used to be a train station, and you know me and trains. Second, it had a lot of Rodin, and I had spent a fair amount of time writing manuals for a tool called Rodin. The thought of seeing The Thinker was too overwhelming to miss it. 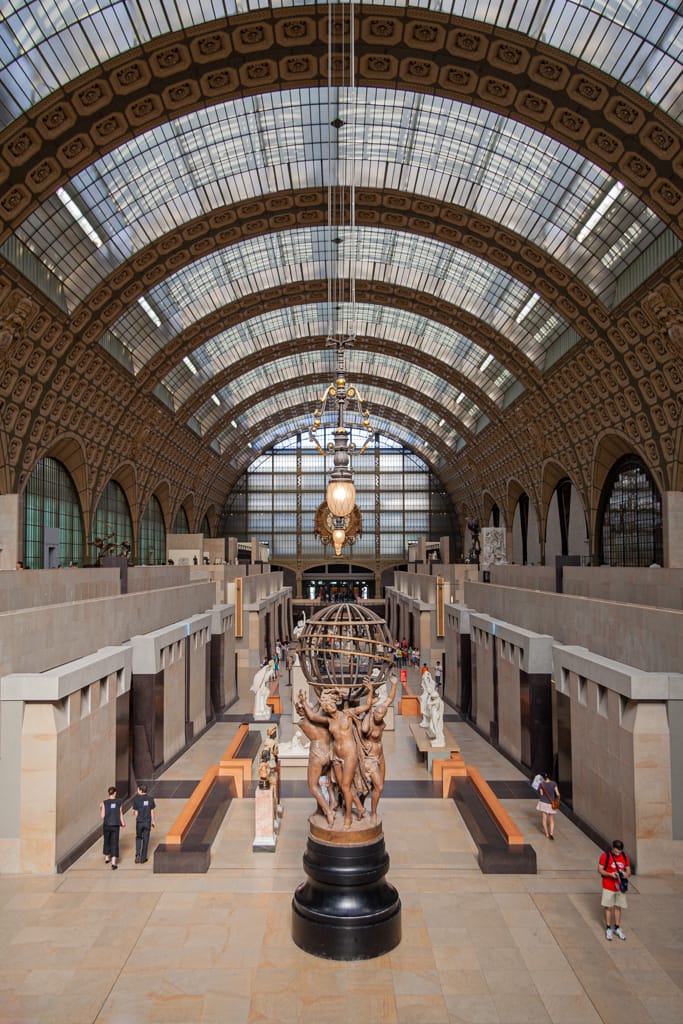 As it turns out, I’m a bit of twit. The Thinker is at the Rodin Museum, not the Musée d’Orsay. It wasn’t a wasted effort though, as I still enjoyed wandering around the gallery. Admittedly, I cut it short due more to exhaustion than anything else.

Back on the road, I headed west (ish), I passed by the Palais Bourbon, which is part of the National Assembly. I didn’t realize this until later, but it explains all the Gendarmes in the area. My goal was the Hôtel des Invalides, a hospital initiated by the Sun King to help all the soldiers who’d give up limbs (or their vision) in the course of fighting for France. I wanted to see the Short Dead Dude — Napoleon. The building is gorgeous, the grounds are beautiful, and the entire area oozes with history. 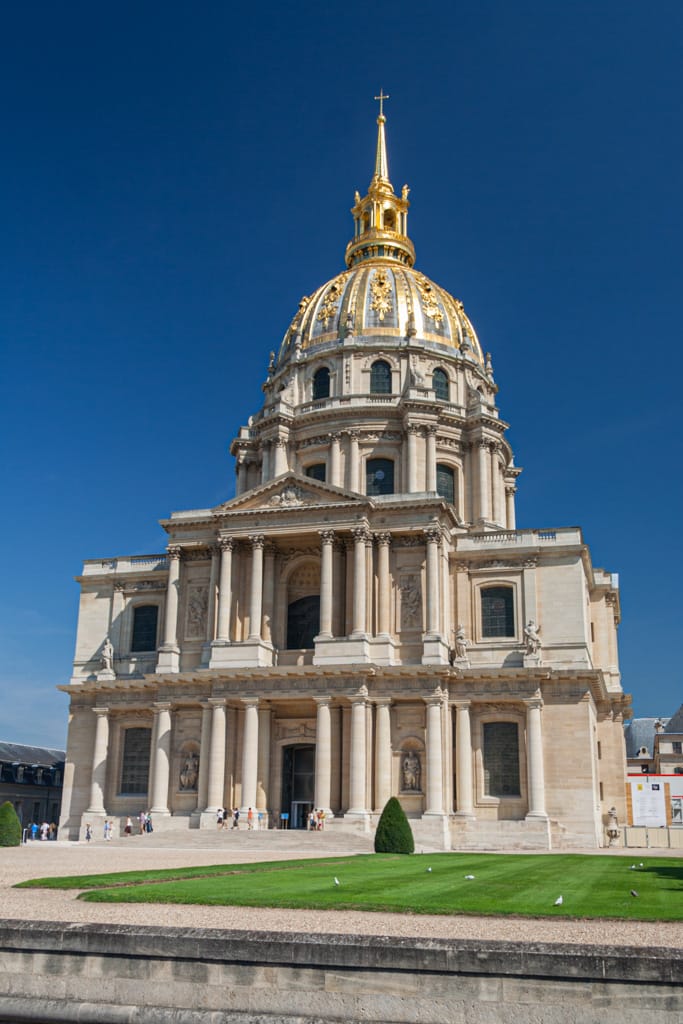 And yet I passed it by. I opted to only go through the building, not really see anything, and continue on my merry little way.

Eiffel Tower. Snap. Walk under. Snap snap. Walk across the Seine and over to get a view the other way. Snap. 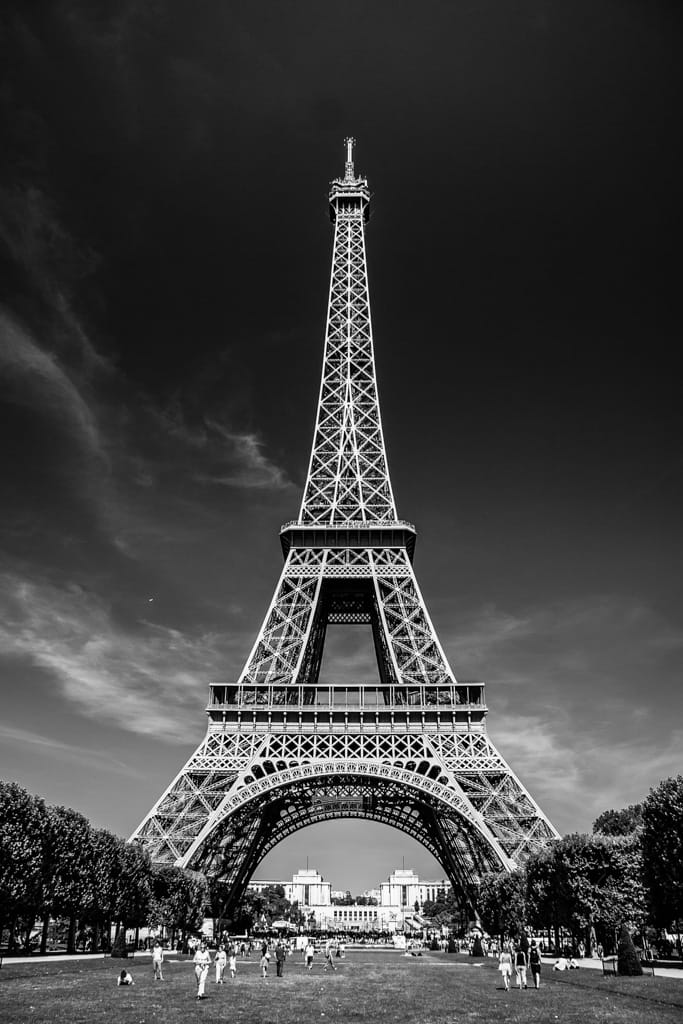 Don’t ask me why I was hurrying. I think part of it was that I hadn’t the energy to do anything more. I was exhausted. And I was also flirting with doing too much on my own. I hadn’t really wanted to go to Paris without Alex. But you do what you have to for your client. (I know what you’re thinking: Ooooh, that’s so rough, having to travel to Paris. It’s hard to believe, but business travel ain’t all fun and games. And it’s taken me a couple of years to understand that.) So a part of me was driving me to see cursory glances, and not dive deep for now.

I went into the Trocadero Metro station. This would be my first real experience with the Paris Metropolitan system. Le Metro is a handy way to get around, and stations are everywhere. Except at the Eiffel Tower. I have no idea why, since you’d think that would be a handy way to get tourists from Point A to Point B.

I was going to head to Montmartre to see the Sacre Coeur Basilica. But time was becoming an issue. It was after 13:00, and I still had souvenirs to buy for those back home. Didier had recommended stores for me to review, so off I went in search of les bijoux. My first stop was Avenue de Champs Elysee. Due to a misjudgement, it was a couple of stops away from the stores. But it did give me a chance to have something to eat. It was after 13:30 by this point, and I hadn’t eaten at all since the night before. Great thing about Paris — a stall selling ham and gruyere baguettes is never far away.

The Champs Elysee is noted for basically one thing: Shopping. There are a couple of movie theatres, the Disco Queen (a primarily gay club), a rather large HSBC, and a couple of car dealerships, which came as a bit of a surprise. The "south" side isn’t as interesting as the north side, which contains stores like Zara and Cartier. Considering my quarry was of the shiny, sparkly variety, that was where I was headed.

Or at least attempted. Nicely-clothed "guards" at Cartier turned me away. (Jerks.) Another store turned away the penniless merely through a withering look from a store clerk. (They must go to school for that.) Other stores just had this air of "you can’t afford anything in here, so don’t even think about it".

The other problem I ran into was the requirements I’d been handed. Certain colours, sizes and shapes. There couldn’t be any claws. No yellow gold. (Silver was acceptable, of course. It’s just the colour.) Most of what I could find was bulky, gaudy, yellow, huge, or claw-set. It wasn’t for a lack of trying, either. Every arcade searched, every store that I could get into was carefully scrutinized. I spent 20 minutes on the south side, and nearly an hour on the north. All to no avail.

Although I was also supposed to check out Place Vendome, I thought I’d go check out Montmartre first. So back into the Metro. A couple of line changes later, I wearily (and very thirstily) emerged just south of Sacre Coeur. A short walk up an alley and I was looking up the hill towards the landmark church.

It felt kind of neat to be there. One of the scenes in Amelie had been filmed at that location. I had always thought that the carousel had been put there only for the movie. Turns out it’s there all the time. I raced up the zig-zag sides to the top, following the route Nino had to find his lost book of photographs. At the top, I looked down as Nino had to see Amelie return his book to his motorbike. I’d almost expected to see Audrey Tautou at the bottom.

I bought a drink from a vending machine when I got back to the Metro. My throat felt like dust, and I couldn’t justify nearly $3.50 for a small bottle of Coke. (Turns out that it’s the going rate around Paris. The tourist-infested areas, anyway.) I partially retraced my steps to find myself at the Opera stop.

I’d seen a cutaway model of the Paris Opera House in the Musee d’Orsay, near a 1/10th scale model of the Opera neighbourhood area that had been overrun with life-size animals. It was a bit of an odd piece of art, and I’m sure somewhere that it makes sense to someone. The cutaway had led me to the real thing. That, and a memory of a scene in The Fifth Element that takes place in a recreation of the Paris Opera House. I zipped in for a quick peek of the ornate lobby. 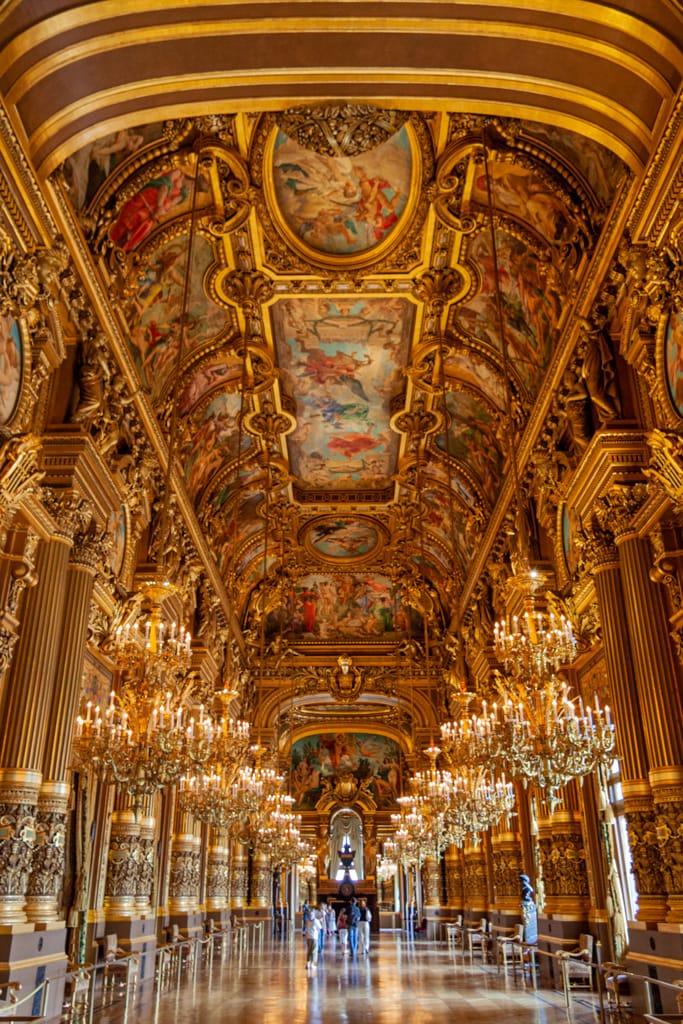 Again the need to get souvenirs took over all sense and I headed back outside and over to Place Vendome, very near to the Opera House. This was when I realized that I’m not really set up for the Paris elite. When you pass by a store that showcases a 70,000 euro watch as if it were little more than a mere bauble, you know that you’re way out of your league. I was feeling quite dejected at this point. I wasn’t finding what I had hoped to find.

I returned to the Opera House to console myself with some inspirational architecture. And it is inspirational. Although the actual theatre area is almost ludicrously tiny, it is gorgeous. (And the opera house in "The Fifth Element" was in Covent Garden, London, England.) The reception area is unbelieveable. I can only imagine the glitterati who have haunted the halls since the building was completed.

I found a small souvenir store as I trudged towards the Louvre. A t-shirt, chocolates, and a small scale model of the Notre Dame Cathedral. The rest came from the mall under the Louvre. Essenses from the former French colonies, a bottle of cedar perfume (for spraying on furniture or in rooms to freshen the air — not for people), and a very unique looking Swatch. Not the shiny bijoux that I had hoped for, but hopefully they’ll be well-accepted.

I watched most of "Alien vs. Predator", dubbed in French, and relieved my feet of the strain of supporting my bulk. I rested for a while until around 19:00, when I ventured back out again.

I did my first bit of wandering around the area around the hotel on my own. It’s a nice, albeit loud area. I settled for dinner at Cafe Rive Droit: a beer and a crepe. I tried to practice my French as much as possible, but I really screwed up a couple of times. Most notably when I asked for the bill. Instead of asking for "l’addition", I apparently asked for intestinal surgery. The waiter had quite a chuckle at my mistake.

Grabbing my camera and tripod from the hotel, I headed to Les Halles to catch a Metro to Trocadero. (Turns out I should have gone to Chatelet — while you can go in at Les Halles, you walk a long way underground to the Chatelet station.) It wasn’t a wasted trip, as I at least have an idea of where I’m going tomorrow morning.

I managed to get a prime location overlooking the pools looking towards the Eiffel Tower. The sun had set, and we were now waiting for the sky to turn dark and the lights to show through. That, and wait for the hourly sparkle show. Despite lots of people coming and going, I managed to hold my ground, keeping my place to take pictures. I avoided putting up my tripod until the last minute, just in case the stories of Gendarmes looking for permits from people with tripods were true. (Tripods, at least in Paris, make you a professional photographer, and subject to permits.) I snapped no less than 30 pictures without a single problem. 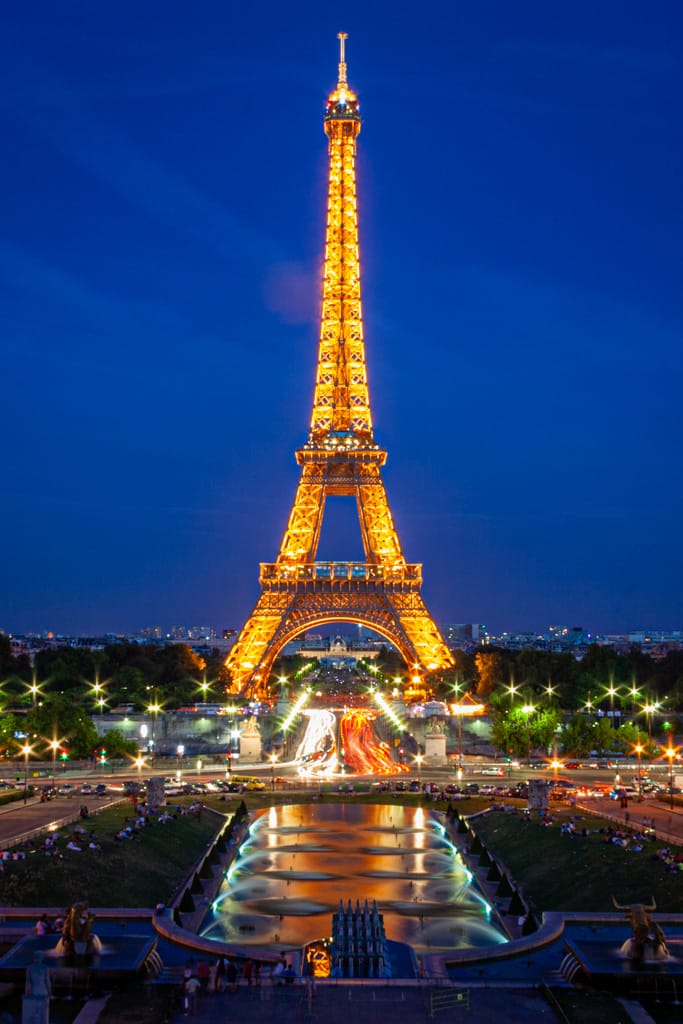 Except for a bit of shmutz on my lens, that is.

As I ended my time looking at the Tower, I was joined by two students from Brazil who had just completed their engineering degrees. We chatted about cameras and what would potentially make my pictures better than theirs. I complemented them on their fine English, to which they claimed it was horrible. I merely replied that they spoke three languages, whereas I have trouble with just one.

With that, I headed to a nearby vendor for an ice cream cone, looked at the Tower one last time, and headed back to the Metro to return to my bed and pass out from sheer exhaustion.