No crepes for me this morning. As I’m beginning to discover, the French don’t consider crepes a breakfast thing. At least at the shops near the hotel. But hunger knows no bounds and I was forced to hunt out an alternative. The hotel clerk misdirected me to a boulangerie (that wasn’t there), but I managed to find a small grocery store on the way back to the hotel. A warm baguette and a chunk of a somewhat smelly cheese made for a pretty decent breakfast. The leftovers should cover me for tomorrow as well.

At 9:15, Adam and I wandered over to the Eurosites building (at 55 rue du Rivoli) to meet up with Stan. Thankfully, Stan was already there — the walk took barely four minutes from the hotel door. Stan works at Datasia and has been hugely instrumental in getting the training set up. He organized the training centre, made sure all the hardware was in place, got the manuals printed, and coordinated pretty much everything I couldn’t. For some reason, I thought he’d be completely different from how I met him. Much younger, extremely well-spoken, and a snazzy dresser to boot! We talked briefly before I headed back to the hotel, leaving Adam to configure the computers for the training tomorrow.

Eurosites supplies meeting rooms. This is mostly because some companies don’t have meeting rooms (Critical Mass has well over 20 of them in the Calgary office alone) and many of the hotels are without conference rooms. They also supply computers, projectors, and drinks and snacks to get through those all-days slogs.

Adam needs to install RedDot on all the computers. I had thought installing on one computer and sharing that would be better, but Adam believes it’s possible. They’re all Windows XP systems though, and I remember the grief we had trying to install RedDot on our systems. Still, Adam is confident, and I’ll have to put my faith into his abilities. He’s said something about using VMware, so maybe that’ll solve the problem.

I finished a batch of email at the hotel before meeting up with the crew around 11:00 in the lobby. Joanne and Erica arrived yesterday (and it sounds like Joanne’s flight wasn’t as much fun as mine); Mark arrived late this afternoon and missed all the fun. Jaime came in and the four of us adjourned to the cafe next door for coffee (and tea, for me) to go over the workflow that Adam and I came up with yesterday. We know it’s not final, but we’ve got meetings with Datasia this afternoon, and we need this so it’s easier to discuss with Datasia.

We had a lunch meeting with Didier at Cafe Marly at 12:45 sharp, so we broke at 12:30 to get there in time. We assumed it was in walking distance. I also wanted to check in on Adam to see how he was doing. Stan, it seemed, was joining us, and told us that it was in the Louvre. Suddenly, I realized that I’d seen Cafe Marly last night when walking through the Louvre’s courtyards. I also realized that Jaime, Erica, and Joanne were wandering Rue du Rivoli not having a clue where this place was. It seems that the street numbers don’t necessarily match up, for whatever reason.

Running into them along the way, the five us hustled over to the Louvre. We passed into through the eastern gate into the Cour Carree. Supposedly, this is one of Stan’s favourite places in Paris. I can certainly see why. We walked quickly into the Cour Napoleon and walked to the Richelieu Wing where we found Cafe Marly. Loic, one of the translation managers, met us on the steps. I recognized Didier’s voice before I actually saw him. Much younger than I had thought (he’s probably younger than me). The Datasia team is really impressing me, and I’m only just really meeting them.

Cafe Marly is very nice — a wonderful view over the courtyard and the Louvre Pyramid. And the food is very French ... even if there is the near-ubiquitous hamburger on the menu. Even in the shade, it was still hot. Sweat dripped down my back almost the entire time we were there. (Thankfully, I’d had the foresight to wear an undershirt.) But despite the heat, it was still an excellent place to be for lunch.

It was our first official meeting with Datasia, and I felt a bit of an idiot. I quickly realized that I was the only one at the table who couldn’t speak serviceable French. Erica is fluent (or at least awfully darn close to fluent). While Jaime isn’t fluent yet, she’s many kilometres ahead of me, and can carry on a conversation.

We returned to Eurosites after lunch for the business end of the meeting. It was our first chance to discuss the translation workflow. I won’t bore anyone with the details, but there is something to be said for having these meetings face-to-face. You can have conversations over a phone or even over email and IM. But you can’t see someone’s reaction to an idea, you can’t judge someone’s thoughts if you can’t see their face. And yes, you could do this over video conferencing, but admittedly there is still a separation. I’m not saying that all meetings should be face-to-face, but if they’re important it definitely helps to fly 9.5 hours.

After the meeting, we all returned to the hotel to get some work done. Mark arrived not long afterwards, but we had to wait for him to get to his place in downtown Paris. (The poor guy had flown from Ireland to Calgary, then turned around after a day — two at most — to fly all the way back across the Atlantic to Paris.)

We met up with Mark outside of La Fumoir, a cafe across the street from the Louvre. (Didier had recommended it earlier in the day.) Despite the name ("the smoker"), it wasn’t actually that bad inside. One of the things I’m learning about Paris is that a lot of people smoke. It’s taking some getting used to. Which is to say I won’t get used to it. Problems with being a near-militant anti-smoker.

Dinner in Paris is slow. There is no rush or pressure to eat. Dinner is a social activity and something that takes time. Food comes almost when the kitchen feels like serving it. And generally, people don’t inhale their meals, preferring to draw a simple appetizer out for as long as possible.

While inside, massive thunderstorms rolled over Paris. Flashes from outside periodically brightened the dim interior for a brief moment. The temperature even seemed to drop a little inside the cafe, as the cooler outside air began to mingle. When we finally emerged around 23:30 (which was still early, at least by Parisian schedules), it was much cooler outside and a nice breeze made walking very comfortable. Even if the humidity was several points higher.

I just finished wrestling with the uber-crappy wireless connection at the hotel. While free, which is nice, the wretched thing cuts out constantly. And there are times you can’t connect. I need to send emails back to Calgary to cover off things that I’m responsible for. Ain’t easy when you can’t get online. 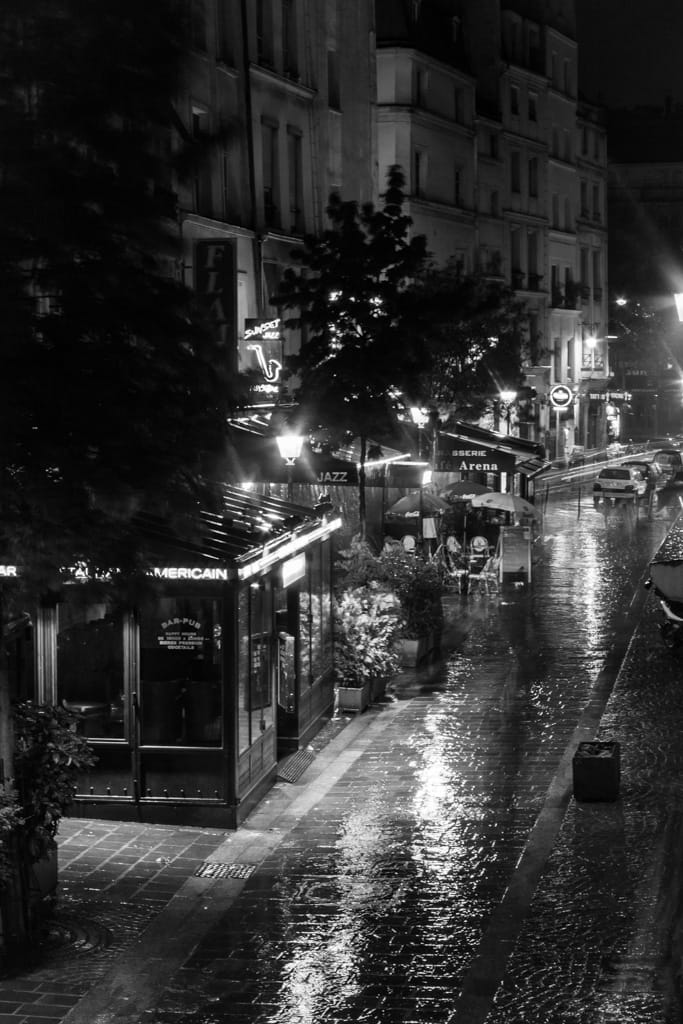