I’m beginning to understand why people hate business trips. You can’t pack what you want (you have to pack for meetings with clients) and you don’t travel necessarily when you want. But at least the locations can be interesting...

The account I work on now is European. They’ve got a massive global presence and are very good to work with. They tend not to hesitate on monetary decisions (unlike most clients), perferring to get the image just right (and understandably so). So when they said that I needed to be present when they were trained with the new RedDot Content Management System, I wasn’t the least bit surprised when they said I had to fly to Paris.

Clothes were going to be a bit of a dicey issue. First, Paris is extremely hot right now, thanks to a Europe-wide heat wave. According to the Weather Network forecast, it will be over 37 degrees Celsius on Wednesday (that’s 100 degrees Fahrenheit for you non-Metric types). And I have to be in a suit. I’m not looking forward to that. Thankfully Jaime (my account manager) suggested that golf shirts would be suitable as well. Alex was very kind in selecting some for me that should hopefully do the trick.

The trick part of packing for client meetings is the length of the visit. I’m in Paris almost a week. A couple of days will be mostly on my own (or with the RedDot instructor), so I’m not too worried about dress on those days. When I’m with the client, however, that’s another issue. I need to make sure that I’m dressed appropriately, and that I’ve given myself enough variation to adjust to the dress code of the day. I had to haul out a suitcase I haven’t used in years — the only one I have for packing suits.

That distraction did cause a few problems. First, I forgot my power adapter for European sockets. I wasn’t too happy about that. I was even less happy when I realized (sitting in the waiting lounge for the flight) that I’d also forgotten my iPod headphones. Just before a 9.5 hour flight. Colour me unhappy. Thankfully, the Duty Free shop sold power adapters (which I needed) and I picked a really cheap (in price and quality, sadly) headphones to get me through the flights there and back.

Boarding, I sat in the wrong seat. Why, I don’t know. First time for me. And of course, when I had a plethora of things that I had to put away. The seat I was assigned to (an aisle) was occupied. Three girls were travelling together and one asked if I could take her seat so she could sit with her friends. I had immediate images of being wedged in the middle seat of a centre row next to a screaming baby. Thankfully, it was a two-seat row window seat, next to a cryobiologist from Edmonton. How’s that for a cool profession? (Yeah, I know, dumb joke.) I don’t think there was a single baby on the plane, actually. I didn’t hear one, anyway.

I worked for the next few hours, in between the meagre meals. I find writing emails, especially to one’s boss, is much easier after a couple of beers. And at high altitude. Helped me sleep for about an hour, too. That helped, since the flight left at 18:30 and didn’t arrive until 03:30 or so (Calgary time, that is).

We flew northish, crossing over the southern end of Greenland. I saw my first iceberg from about 37,000 feet up. The sun never set, due partly to the time of year and partly to the altitude — it remained reasonably bright right through the flight. At least until everyone closed their blinds for a couple of hours of rest. I had to sit back and rest then, too, as the entire cabin went dark. Overall, a much better flight than the one to England back in April — this gave us more than enough time to sleep, even if just a little.

At Frankfurt Airport, I had just under 40 minutes to find my connecting flight. First, Frankfurt Airport is huge. Second, it’s really poorly labelled. I had to find Gate A36. In most airports that I’ve been to, it’s not a problem. In this one, it was a problem. I was told "upstairs and follow the signs".

Allow me to give you more specific instructions. Up the stairs, 300 metres down the corridor, down a short hall to your left, then turn around right and get in the Non-EU Resident line for customs. (Yes, I cleared in Germany. No French stamp for me.) The customs was a joke. The guard looked actually bored. Two questions: Where are you going? Business or pleasure? That was it. Literally. Nothing else, even when I said I was going on business! That elicits a half-hour interview with armed soliders when you try to go to the States! Once through there, down the stairs, following signs that say "Gates A1 – 19", despite previous signs that said "A1 – 54". Then through security.

Once through security, turn right and walk past the customs lines for the "B" gates. This arcs around until you get to elevators that go down to the underground tunnel between the two terminal buildings. You can also take the stairs, which are far faster. Then you walk down a 600 metre long tunnel (with moving sidewalks and nicely lit, I must add) before reaching elevators on the other side. Then up (I took the stairs again) to the hallway, hang a left, and walk down another 400-500 metres of airway until you find your gate.

Thankfully, the flight was delayed 30 minutes.

Lufthansa runs a nice flight. It was barely a third full. And despite the relatively short flight (about 90 minutes), I got a drink, sandwich (cheese on dense German bread), and a little chocolate bar. Air Canada — take note of how your alliance partner treats their guests on short-haul flights! You could learn a lot from these guys!

Charles du Galle Airport is huge. One of Europe’s largest. It took a fair bit of walking to get to the baggage carousel. It took even longer to find the way out. For reasons I don’t fully understand, Terminal 1 isn’t connected to the rail system. So everyone shuffles to Terminal 3 via shuttle bus. And the rail connection isn’t easy to navigate unless you’ve done your research a bit. And you stand in line for over a half hour waiting to get a ticket because the ticket dispensing machines need European Visa cards — North American ones don’t work. (Go figure.)

The RER trains are regular, and the trip takes about 45 minutes to downtown Paris. Sadly, the trains are not well-kept. I would put them as the poorest condition of any train I’ve ridden anywhere in the world. The stench of stale urine didn’t help any, either. I’ve heard this happens, but was still amazed. The trip was punctuated by people begging for spare change.

Chatelet-des-Halles (the stop after Gare du Nord) is the second-largest train station in the world after Shinjuku, Tokyo. On the surface, you’d never know. But underground, it’s a connection between several train and Metro lines. And it’s a zoo. Carrying my rather awkward bag all that distance was no fun at all, and I’m not looking forward to leaving that way (I have little choice, and given it’s proximity to my hotel, I’d be stupid to go elsewhere). It took 15 minutes just to get out of the station, it’s that big.

Thankfully, that left me with a 30 second walk to my hotel. I was in my air-conditioned room mere minutes later, revelling in the fact that I was no longer melting in the 33-degree heat of the city. My shirt was soaked.

I immediately had to call Jaime to make plans for the evening. Which meant calling international to her cell phone, despite the fact that she lives 10 minutes from my hotel. (I love technology!) I had until 19:30, when she’d be more free, so I went for a wander. After all, I’ve never been to Paris before!

The Hôtel des Ducs d’Anjou is a five minute walk to the Seine and the Louvre, about 10 minutes to Notre-Dame, and mired in the middle of a lot of cafes. I can hardly complain about its location. I decided to walk to the Seine and decide where it would take me from there. It wasn’t long before I was facing the west facade of Notre Dame Cathedral. The square in front of it was full of people, most just sitting around, talking, and viewing the sites. I passed by, taking a closer look at the facade before moving around the south side towards the east end. Crossing the bridge, I came back across the bridge, returning to Place Notre-Dame. There I waited until the cloud that had been sitting in front of the sun finally cleared so I could get a nice picture in the sunshine. 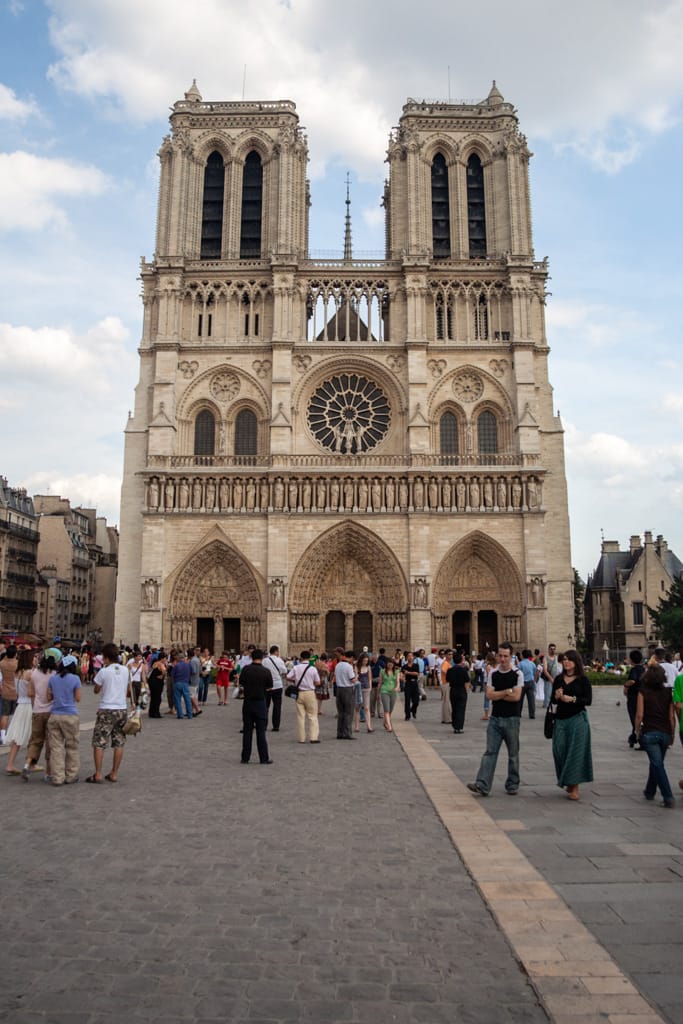 Returning to the south side (the Left Bank, I believe), I walked down the river, past the countless booksellers with their dark green display boxes until I reached Pont Neuf. I returned to the north side again and headed back to the hotel. 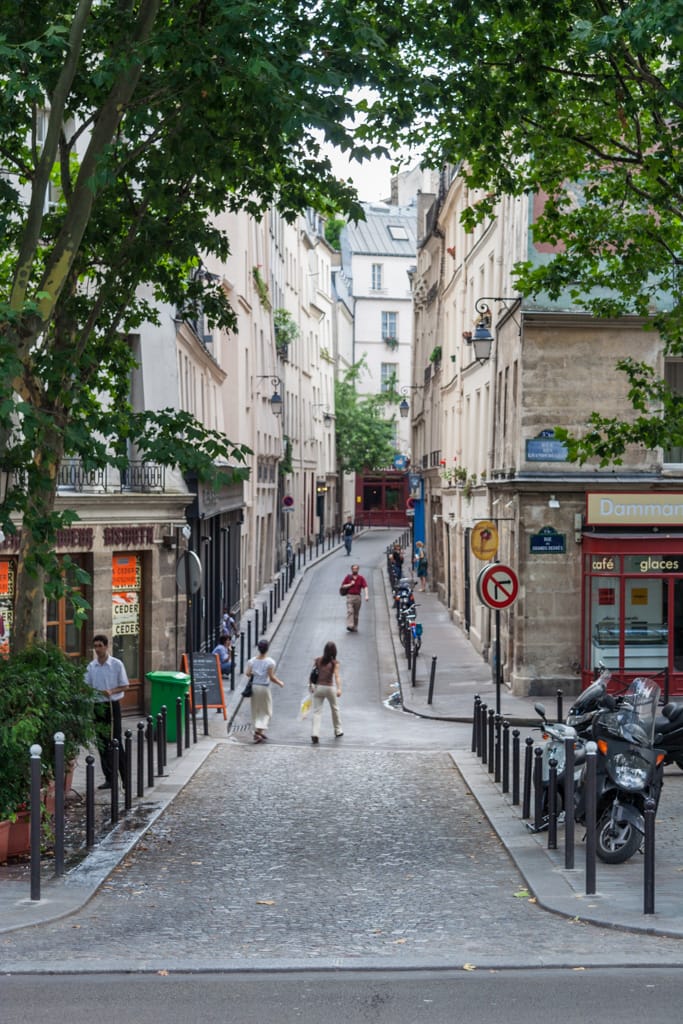 Jaime was a bit late arriving due to her meetings and a non-exact idea of where exactly the hotel was. We were soon weaving our way through the many narrow roads that make up this area of Paris, trying to find the ideal cafe to sit and have our meeting. The first place was hardly what I’d had in mind (the menu listed "pork meat", which even in French didn’t strike me as great). The second was much better.

Sadly, our meeting didn’t go exactly as planned. Namely that I nearly face-planted my dinner from exhaustion. A bed never felt so good before.