This weekend, it was my turn to be surprised. And surprises came in droves.

Sunday was my 34th birthday. I find it a little hard to believe that I’m actually that old. I always figured when I was in my 30s, I’d be more … mature. And yet I find myself being more immature with each passing year. I guess I’m holding to my pattern — 18 years old, with a heap of experience. For now, I think that’s a good thing. Experience helps, and one can’t get too mature. You lose all the fun, after all!

I sprinted home from work. I can bike home now almost as fast as I used to drive. I can’t quite figure out how I’ve done that, but I can’t really complain, either. It’s a good thing. Except that damned 8th Street hill. It’s just evil. It’s not as bad as other hills in town I have to say, but it still sucks the life out of you.

Following a shower, Alex packed me in her car, and off we went. Destination unknown. Quite literally. This weekend was my chance to be surprised. I don’t ask questions, though — I prefer to try and guess to myself. The process is usually pretty simple elimination. I can eliminate quite a large number of things without much effort. Alex, of course, knows this. So she makes sure to keep me guessing.

Our first stop was Banff. Dinner. Nothing serious. Kind of an eat-and-run thing. The Wolf Street Grill completely ignored us, so we tried some Japanese place a couple of blocks away. (The sign out front, in Japanese, solicited a great deal of laughter from Japanese tourists. I’m now dying to know what it says.) We ate quickly before heading back to the car and our exit.

Although we ended up making one side-trip into Abomindable Sports. Sandal-searching. And I found something — Tevas. My previous pair of leather sandals was Teva, and I rather like them. I wanted something that wasn’t leather, though, since I wanted to be able to use these in wet conditions (among other things). Tevas ain’t cheap, though. But they fit, and they don’t hurt. That’s a tough thing to overcome sometimes. Tevas it was…

We continued past Lake Louise and the Icefields Parkway turnoff (much to my relief), then over the Big Hill into Field, BC. Passing Field, we headed into the valley towards Golden. I was trying to figure out where we were going, and constantly drawing a blank. There was a faint hope that it had something to do with 2816, since I knew she was in the neck of the woods during the weekend. But beyond that, I hadn’t a clue.

It seems that finally someone had the sense to start work on the Trans Canada highway east of Golden. It’s been a mess there for decades, and is generally difficult to go through. The hills are steep, the road windy, and there are a number of 40 km/h corners. The new section that they’re building, so it looks, will create a massive fly-over to reduce the cornering and hopefully twin the lanes. It’ll be a few years until it’s open though — there’s a lot of work to do.

Being the master of deception that she’s becoming, Alex really threw me off with a visit to the 7-11 in Golden before going a mere two blocks to the Travelodge for our motel room for the night. I had no idea what was going on. Thoroughly stumped.

The next morning we were back on the road, following a brief stop at the Humpty’s for breakfast, we continued west. Why we were going to Revelstoke, I had no idea. We stopped briefly at the railway museum (but didn’t go in — next time, I need to actually go in there). I had heard about a trip from Revelstoke to Golden with 2816, and thought that maybe that’s what we’d gone there. (Alex had mentioned that we needed to be “there” for 13:00.) We hopped back in the car, though, and continued south.

Now I was stumped. I have no idea what’s south of Revelstoke. As it turned out, not much — we were on the wrong road. We ended up having to double-back to the Trans Canada and continue west. I was beside myself with confusion. Where the hell were we going?

Three Valley Gap. That’s when the surprise revealed itself. As we took seats in the restaurant there, there were settings for four, not two. Someone was going to meet us — but who? I couldn’t think of anyone who lived in the area. And that’s when Allen and Jean appeared. The sneaky trio (apparently mostly Jean’s doing) had completely orchestrated the charade.

The four of us had a lovely (long) lunch, followed by a transfer of inheritances that Allen and Jean had brought from Ruskin. We’ve now got some of Christena’s things that she’d left to Alex. Oddly enough, with no planning at all, they seem to fit with our house.

Naps were next. Well, for three of the four of us. Not yet being tired, I went wandering with my camera. I was lucky enough to catch a west-bound coal train (the Canadian Pacific line runs right past the hotel), though I botched the timing and the train’s a bit blurry. Things to remember for the next time I try that. Fortunately, the other trains I shot don’t move.

Three Valley Gap is the oddest place you’ll ever see. It’s very much a work in progress and comes complete with a variety of antiques, including five former passenger cars from the Canadian National and Canadian Pacific railroads (and technically VIA, but they’re ex-CN/CP). Included is the Eatonia, Sir William Eaton’s private railway car. Most are in poor condition, not being maintained at all and restoration seems not to be a consideration. They do make for interesting photography, though. 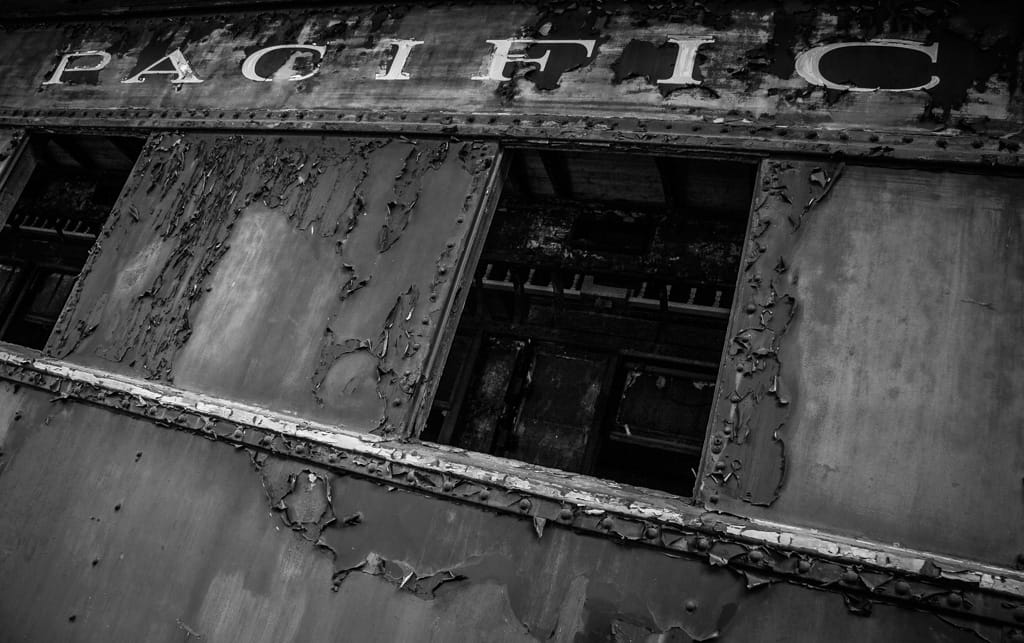 I found the group in the main garden wandering about. We gathered, piled into Jean’s car, and drove out to Revelstoke for dinner. Our first stop sounded good on paper. But the rather angry dog and very unassuming appearance of the restaurant suggested we go elsewhere. This led us up a long windy road to the Glacier Lodge, about a stone’s throw from the Revelstoke Dam on the west side. A massive log hotel built in 1999, and apparently a great place for dinner.

It was an outstanding dinner. Miso-marinated salmon encrusted with sesame and ginger. It was a powerful but tasty meal. Alex had a lamb shank done Moroccan-style, but became more intrigued with the joint she found in the meat than actually eating it. This tortured poor Boulder, one of the wilderness guide’s two dogs. He wasn’t allowed on the patio, but the proudly displayed bone was too much for him to handle. When the waitress scolded Boulder, I suggested that she scold my wife instead for being a tease.

Night photography was marginally successful. The biggest success was capturing an east-bound sulphur train, the lights creating glowing lines across the frame and glinting across the water.

I was woken with a “Happy Birthday”. The goal was to try and chase 2816 from Palliser to Calgary. Alex would be on her first train chase. But first, we had to have breakfast. We met up with Allen and Jean … and a few presents. 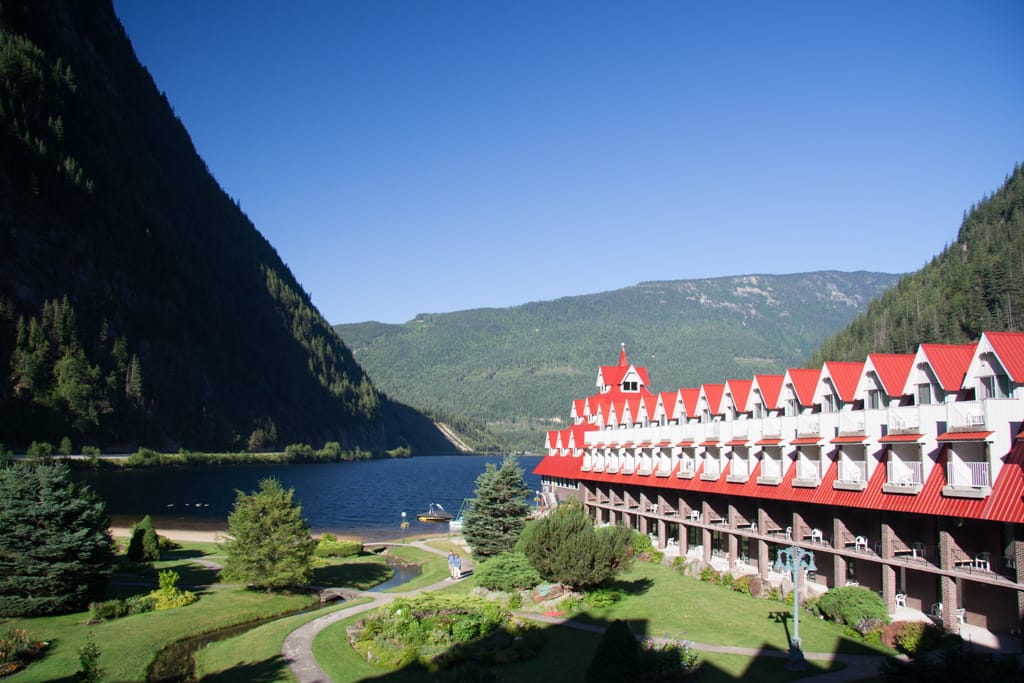 Sometime in the next while, the group of us will go to Washington and ride the dinner train. That was my present from Allen and Jean. Very nice of them. Alex surprised me with a painting of the York Railway station, circa 1930s/1940s. The kicker is that I sort of knew that she’d bought something when we were there, but had been told I couldn’t look at it. Never even thought about it after we got back from England and had since forgotten about it. It was a very welcome surprise.

The Empress had left Revelstoke heading east around 8:00. We passed her arriving at the MacDonald tunnel entrance heading into Roger’s Pass. In theory, we could have started the chase there. But I wanted to get to Palliser before her to set up, and I knew that the construction traffic would slow us down a bit.

We stopped at Tim Horton’s for a light snack and teas. As expected, the construction did in fact slow us down. I kept a weather ear out for the train, trying to make sure it wouldn’t get past us. We arrived at Palliser and took up a position and waited. And waited. And waited.

2816 was supposed to leave Golden at 13:00. At first, I believed that she was just behind schedule. Freight trains get priority in most cases, so it was concievable that a delay would put her off. But 90 minutes somehow didn’t seem right. Before long, I came to believe that, somehow, she’d gotten in front of us. Perhaps in Golden, when we were at the Tim’s. Heartbroken at having to give up on what should have been a great chase, we headed east without train pictures in hand.

As it turned out, we were ahead of 2816. The delay was long, and had we stayed for another 10 minutes, we’d have gotten the picture. My friend Graham was there not long after we’d left. I missed a train. Me. The Trainstalker. I feel so ashamed. It put a bit of a downer on my birthday. It seems really trivial, I know, but I just hate missing trains! It was my own fault, though, a lack of patience and too much indecision did me in. Otherwise, it was a good 34th birthday.

Another year older. Hopefully a bit wiser. And perhaps a lot richer. Last year, I wasn’t married. Next year … who knows?