Surprise weekends are a good thing. Especially if you have a good place to go.

We have no standing rule that says we have to go anywhere, though. Although the "rules" (such as they are) suggest that staying at home is an option, we have yet to actually do that. This weekend was no different.

This weekend was grossly delayed, though. This year has been quite busy with a multitude of things to do and see. As such, we’re several months behind schedule on surprises. To make sure I don’t follow too far behind, I felt something particularly nice was important. That’s how we came to Bow Lake in Banff National Park and Simpson’s Num-Ti-Jah Lodge.

We went up on Saturday, the first weekend of the Calgary Stampede. In fact, because it’s Stampede time again, it gave us the opportunity to have a hearty Stampede breakfast in our neighbourhood. I’m not sure if it’s a homeowner’s group specifically, but someone definitely has their act together. We came across the same breakfast a year or two ago (admittedly I can’t remember which) and thought that it would be neat to attend. Little did we know that we’d be living there. The group puts on a mean breakfast.

We then started the long drive out to Bow Lake. Only I knew where we were going, so it did raise the constant question: "Where are we going?" That was usually tied with: "When will we get there?" The gaps in between were punctuated with "How far are we going?", "Are we going to [insert place name here]?", and "Would Asia like going to [insert place name here]?" (That last one is a nod to a previous spoiled Surprise Weekend where I was caught off-guard with the mention of my oft-misbehaved cat.)

Thankfully, I’m very good at not answering questions like this. In order, the answers might sound like this: "Somewhere", "Before we go to bed", "As far as we need to", "We might be going there", and "Possibly, but I don’t think she’d enjoy being caged in the car for more than five minutes". (Asia hates going to the vet, which only takes 10 minutes.)

Our first stop was Banff. Not for any real reason other than we had to eat lunch. Our favourite place, the Old Spaghetti Factory, has finally lost its charm. A couple of years ago, they changed their recipe for the bread. It’s not bread anymore, it’s some conglomeration of bread-like powder. And the Italian salad dressing is ... I don’t know how to describe it, but it ain’t the same. The quality has slumped overall, which is probably to recoup some of the costs on their otherwise reasonably-priced meals. It will likely be the last time I eat there. Considering we’ve already written off Starbucks, who knows how many more places will end up on the banned list...

We did a little shopping (I can’t say for what, though) and I searched for sandals. As of yet, I’ve found nothing. But then I’m a picky sandal person, so it’ll probably take a while. Hopefully not too long, though — I need a second pair, and soon.

Returning to the car, we headed back to the Trans Canada and continued west. This brought a return of questions regarding our destination, and a wad of non-commital responses. About 40 minutes later, we turned up Highway 93 (the Icefields Parkway part of it, of course). This brought about a specific direction of questions. It’s about three hours to Jasper, and there isn’t much in between. Alex wasn’t too keen on being in the car that long. While not giving away anything truly important, I swore that we wouldn’t be long until we got there. Well, except for one thing:

I’d totally forgotten the name of the place we were going.

Thankfully, when the sign came into view, it wasn’t too hard to realize that we’d arrived. The cat, as it were, was finally out of the bag.

Room 24 overlooks Bow Lake, facing roughly south. The view is spectacular. They key is big and old, tied to a horseshoe so you don’t lose it. No fancy electronics here. When we entered the room, we had our Romantic Package waiting for us. In all honesty, I’d totally forgotten about it. A bottle of champagne and chocolate-covered strawberries all served on a flat rock. Decadent, most certainly.

Being late in the afternoon, we wandered around looking at the natural splendour of the area before going to dinner. One downside were all the bugs. Not mosquitoes, but flies of some kind. Mildly annoying. That and the American tourists who wanted to know about Calgary, yet seemed to "know" all the answers. Can’t say I didn’t warn ’em... 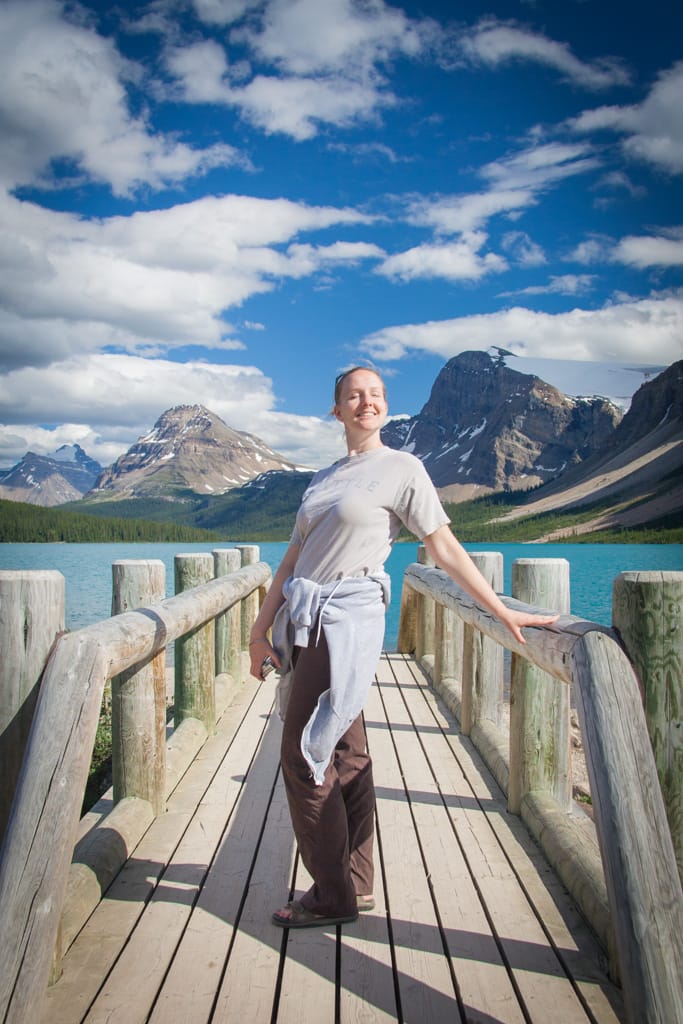 Num-Ti-Jah is known for an amazing kitchen. The reputation is well-deserved. The food there is outstanding, if a tad over-priced. (I will freely admit that the Lodge as a whole is expensive. This is not your average stay at a Holiday Inn — this is on the order of a Fairmont, but at a log-cabin appearance. In all honesty, it’s worth it. Especially if you’re there for the nature. If you just want a room, you can go many places that are a lot cheaper. But if you want to hit the trails right after an excellent sleep and a killer breakfast, there isn’t much better.

Which is pretty much what we did the following morning. Following breakfast, we checked out and packed the car. Tying my car keys to a loop in my pants, we headed off on the 4.5 km trail to Bow Glacier Falls. (As a point of note, bear bells or jingling keys do very little. Bears apparently have no better sense of hearing than humans. So if you think you can hear a bear bell past a couple of hundred metres on a flat plain — let alone in the forest — you can imagine how easily you’d run into a bear. The recommendation is to make a lot of noise. Apparently, that’s what helps most.

The hike took us about an hour, depositing us at a glacial valley. It’s bleak, cold, wet, and utterly gorgeous. There’s just something inspiring about the sheer rawness of an area that has barely any vegetation, where snow probably fills the area metres deep during the winter. Where few humans tread (indeed, we saw only two couples in the area) there is much to be seen.

Returning to the car, we found that a storm was brewing at the south end of the Bow Valley. It seemed that there was a massive storm going over the mountains, probably heading right for Calgary. Indeed, a fair amount of rain and golf ball-sized hail wreaked havoc in the north of Calgary (the south seemed to be spared) later that day.

We ate a bag lunch (courtesy of Num-Ti-Jah) before taking a leisurely drive back to Calgary, managing to avoid getting the Mini hailed on a second time.