One last thing we needed to do before we leave the Hong Kong area was check out Hong Kong’s forgotten half-sister, Macau. Macau was founded a couple hundred years earlier than Hong Kong by the Portuguese, and was originally the heavy weight title holder of foreign trading port until the British dethroned it with, shall we say, some less-than gentlemanly behaviour to get their way (I refer to the events leading up to the Treaty of Nanking).

Getting from Hong Kong to Macau is a fairly simple process: you either go overland (through China, which we can’t do since we’ve officially left China and don’t have a multiple-entry visa), or you take a ferry. While Macau might be Hong Kong’s forgotten half-sister, they seem to have a pretty solid relationship, especially now since they’ve both returned to the stewardship of China. The ferry service is perfectly representative of this — they run every 15 minutes.

The trip is 65 kms in between. It takes about on an hour. On a hydrofoil. How cool is that??

Macau is simultaneously different than Hong Kong, and very similar. It’s similar because, like Hong Kong, it’s a place where two cultures collide and coexist. It’s different because you don’t see English a lot (you do hear it, though, English is well-known), it’s mostly Portuguese (obviously).

Macau is small — much more than Hong Kong. You can walk around much of Macau Island in a fairly short period of time. After endulging in another round of dim sum, we proceeded to walk pretty much right around the southern tip and up to a small temple called A-Ma. It was easy to see the Macau Tower as we rounded the tip, on our way. 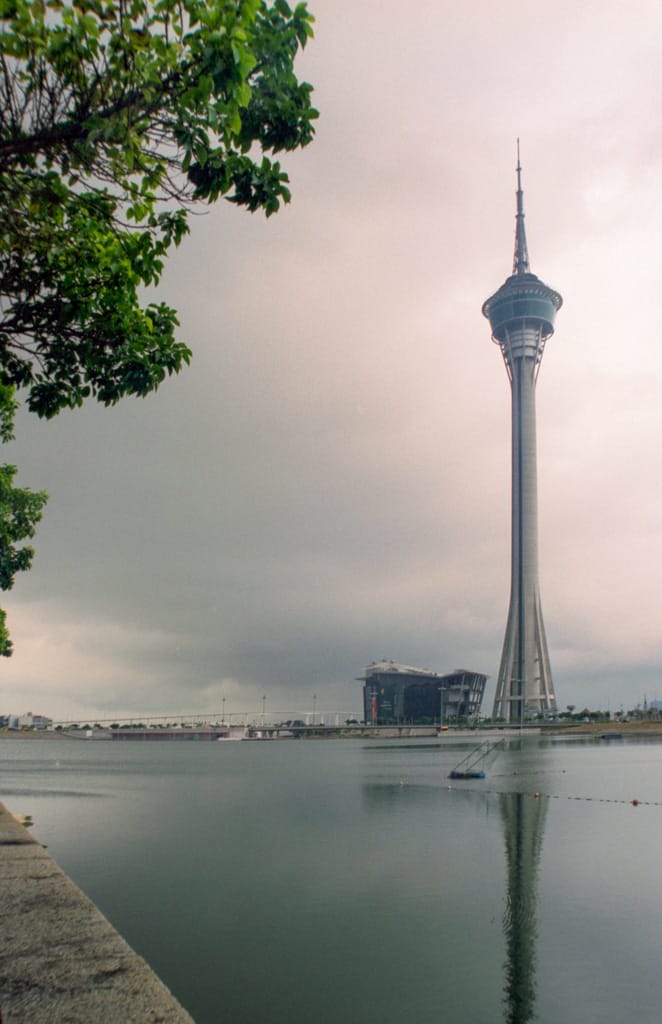 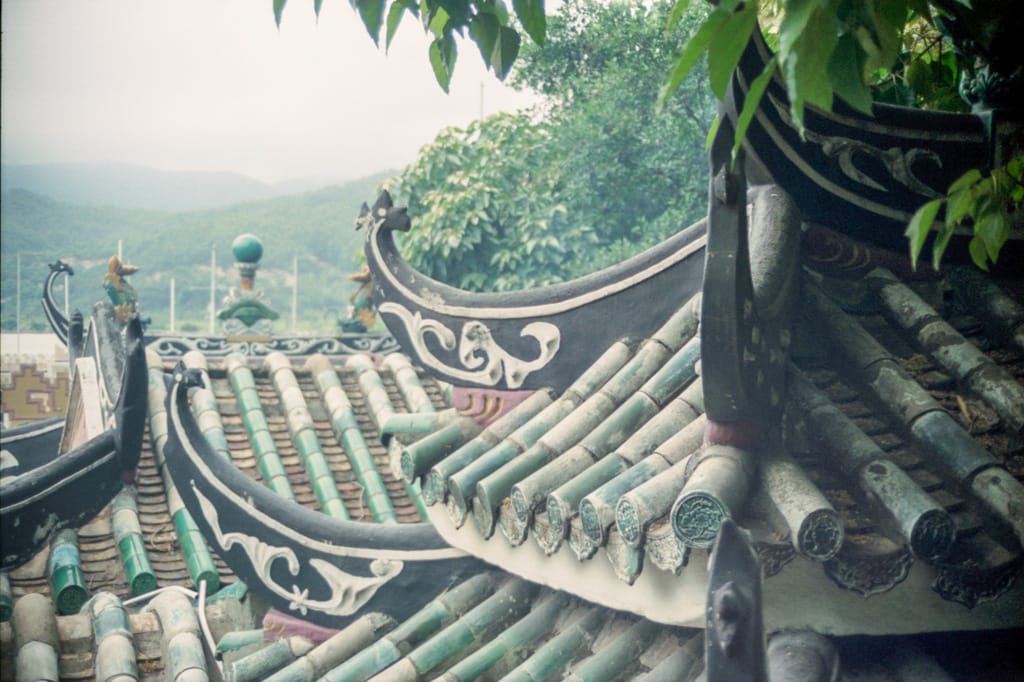 Following the temple, we walked along the walking path suggested by the Lonely Planet guide, but only in reverse. At least until we got rained on. A lot. Near torrential downpour. That kind of slowed us down. We were actually trapped under an eaves for about half an hour waiting for Niagara Falls to let up enough for us to continue on our way. As it stands, it barely let up enough for us to find a cafe to hold out until the rain stopped.

Not long after, we found a main square (the name of which now escapes me) that has very interesting tiling on the surface. There’s a fountain in the centre surrounded by lotus flowers. After the square, Amy and I kind of wandered a bit aimlessly until we found ourselves at the Royal Hotel — mostly to escape the intense heat and humidity for a while. There, we realized that sticking around in Macau, though nice, wasn’t entirely what we had in mind. A quick visit to the ruins of St. Paul, and we’d head back to Hong Kong. 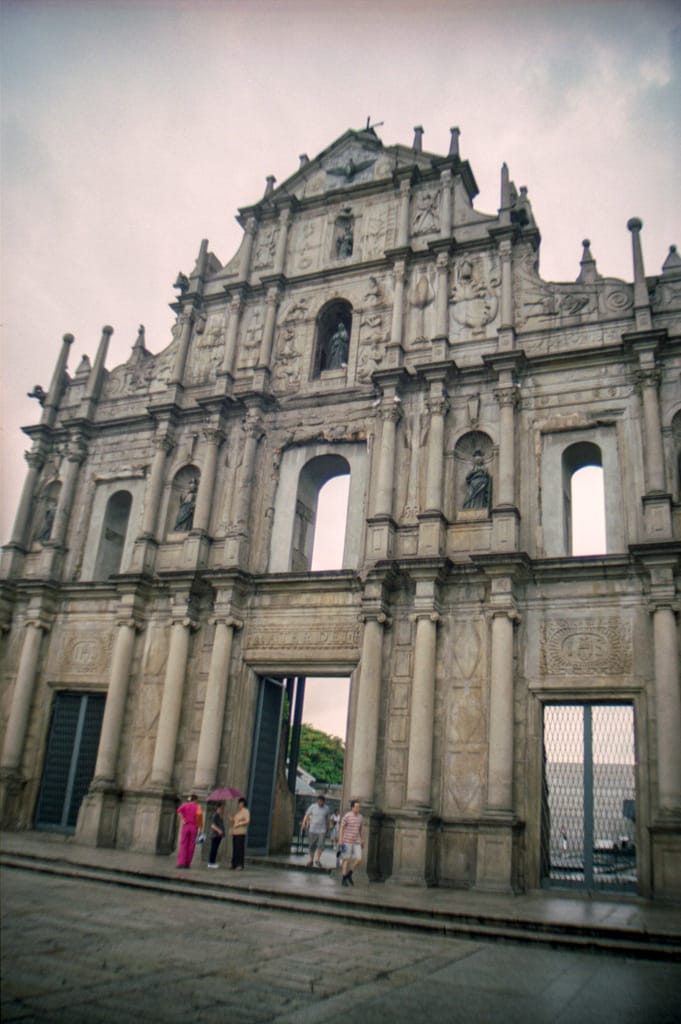 The ruins of St. Paul are what is left of a grand cathedral that caught fire and burned to the ground ... except for the facade, which still stands (partly thanks to a supporting structure still in place). It sits very out of place with the rest of the buildings surrounding it, except for the fort sitting next to it. The fort is quite old, dating back a few hundred years. The view from up there is quite good. The Macau Museum is there, too, but we didn’t get a chance to see it — the museums are all closed on Mondays. 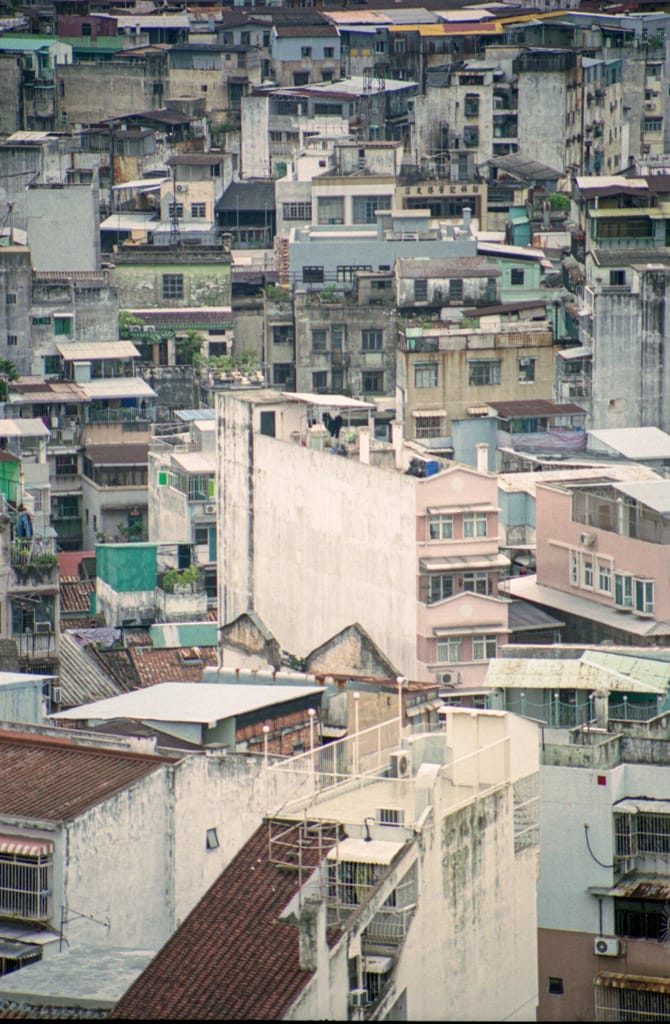 Back in Hong Kong, we went immediately to dinner at Jade Garden, a thoroughly uninspired restaurant in Star House. (If you’re in Hong Kong, and reading Lonely Planet, take their advice and don’t go there. There are plenty of other much better restaurants in Kowloon ... and plenty more in Hong Kong, for the HK$2.20 ferry fare.)

Sadly, we saw not much of Macau. There is definitely more there to see.