For the record, we didn’t it plan it this way. But like many things on our trip, fortuitious circumstance happened to place us in Hong Kong on the first day of the Dragon Boat festival! 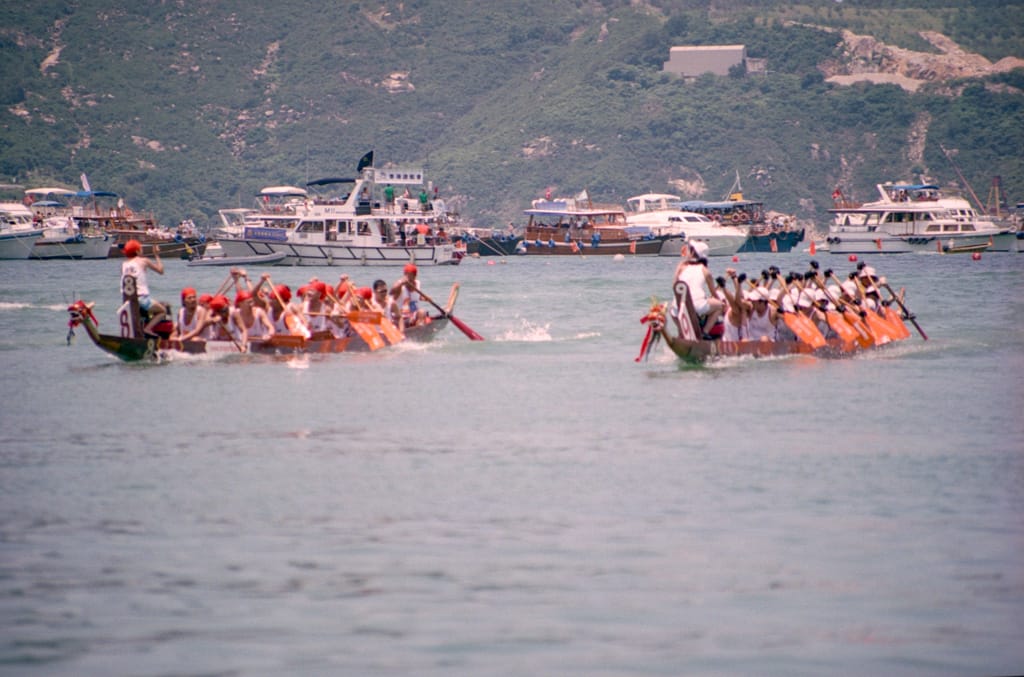 Having first tried dragon boating last year, I was curious to see how the Big Buoys (yes, bad joke) do it out here in Hong Kong, where the sport reigns. There are many differences from how I did it in Calgary last year, and what seems to happen here.

First, there isn’t one big dragon boat match — there’s a bunch of them. (There’s an international competition held in September or October, this isn’t part of that.) Each little town or village, even islands, have their own competitions. Based on what we read in a magazine, we settled on Stanley, at the south end of Hong Kong Island.

Whoever said "getting there is half the fun" hasn’t tried riding a Hong Kong city bus from Tsim Sha Tsui to Stanley. The 973, although a picturesque route, takes 90 minutes due to the curvy, non-direct highways and the insane level of traffic (it is a weekend, after all). My butt was numb by the time we got there. At least the buses are air conditioned. However, that makes getting off very painful — it’s like walking into a sauna.

Our first stop was not the beach, though, where the competition is held. It was at a place called the Stanley Restaurant. (If Amy didn’t eat right away, I feared she might start looking at me like hungry characters do in cartoons, and think I’m a hot dog or something.) A bowl of wonton and noodle soup (along with several teams of dragonboaters), and we headed down to the beach.

It was packed. People were everywhere. Announcements were in Cantonese, with a bit of English thrown in for us white folks. (There were a few of us.) There were teams from all over Hong Kong, including a few from Canada: University of Toronto, University of Western Ontario, and my own alma mater, University of Waterloo.

As I would find out later, they’re alumni who moved from HK to Waterloo, then moved back after graduating. They tried to draft me, but I haven’t even started training for my own team this year!

As Amy so eloquently pointed out, the heat was nigh-unbearable. The only way we survived as long as we did was standing in the water up to our knees. (I’m not sure that I would have wanted to swim there, anyway, but...) When we could finally take no more, we headed back. Another 90 minutes on the bus.

Trains are suddenly looking so much better, now that we’ve taken them for granted.