Tuesday, 31 May 2005
[This entry originally posted on How To Get Lost: Enter the Forbidden City.]

My calf muscles are killing me. I don’t know how many stairs Noah, Justin, and I climbed yesterday, but I swear my calves have never received such a workout in their existences. And now they’re taking their revenge on me. Even small stairs hurt ... a lot. They’re rocks attached to the backs of my legs. They don’t flex, they pulse. Forget the Stairmaster, folks! If you want a great workout, spend the money on a trip to China, then visit three different sections and walk as much of it as you can. Your legs will be cut out of stone in days.

The first thing we had to do this morning was change hotels. Due to a change in plans (namely, deciding we needed more time in Beijing, and no availability in the New World Beijing Courtyard), we had to madly scramble for a new hotel that wouldn’t put us out by the airport. The best we could end up with — and I do mean this figuratively — was The Peninsula Palace. For the record, I would like to state that I originally thought this to be a fancy name for a half-ways decent hotel in Beijing. I didn’t realize that this is also one of the top hotels in the country. I’m very thankful that the dollar goes much further here than it does at home. This hotel is not much more expensive than a decent place in Calgary. I still feel uncomfortable staying here.

Checked in, we headed out in search of a quick bite for lunch (we were actually hungry for a change). Pork dumplings packed away, we headed towards the Forbidden City.

For the record, this place is big. Really big. Insanely big. It’s hard to imagine how big it is until you’re inside and walking up the middle of it. I’ve never seen anything so big. It’s a seemingly endless stream of courtyards, halls of Harmony (most of them were "bla bla of Harmony"), and scaffolding. Yes, scaffolding. We knew about this back in St. Petersburg. Beijing, in preparations for 2008, is dusting off the old China and polishing up the silverwear. Where there were probably at least 103 items on the audio tour menu, there are now a mere 17. Only the middle sections of the City are open — the wings and sides are all closed, undergoing a massive overhaul in preparation for a flood of tourists.

Oh, as a side note, there are a number of people who warned us about the bathrooms here. And the chaotic lines, and the spitting ... the list was quite lengthy, I assure you. While I can’t speak for Amy, I’m sure she’ll agree that so far, we can’t understand what all the problems are. Bathrooms are mostly clean (the squat ones, anyway — I haven’t been in the western side to know for sure), the crowds are more than manageable, and spitting has been minimal. We still have a few cities to go, mind you, so that might yet change.

We picked up the audio tour. The English version is voiced by none other than Roger Moore. Assumedly, the recording is a few years old, now, but 007 still sounds as cool now as he did in The Man With the Golden Gun — my favourite Bond film with Moore. Even if you’re here before the palace completely reopens, I highly recommend the audio tour. Although there are nice signs put up by American Express and some audio explanations piped over speakers, there’s nothing quite like velvet pouring into your ear as you walk around (although bring your own headphones — the ear piece they supply is a tad painful). 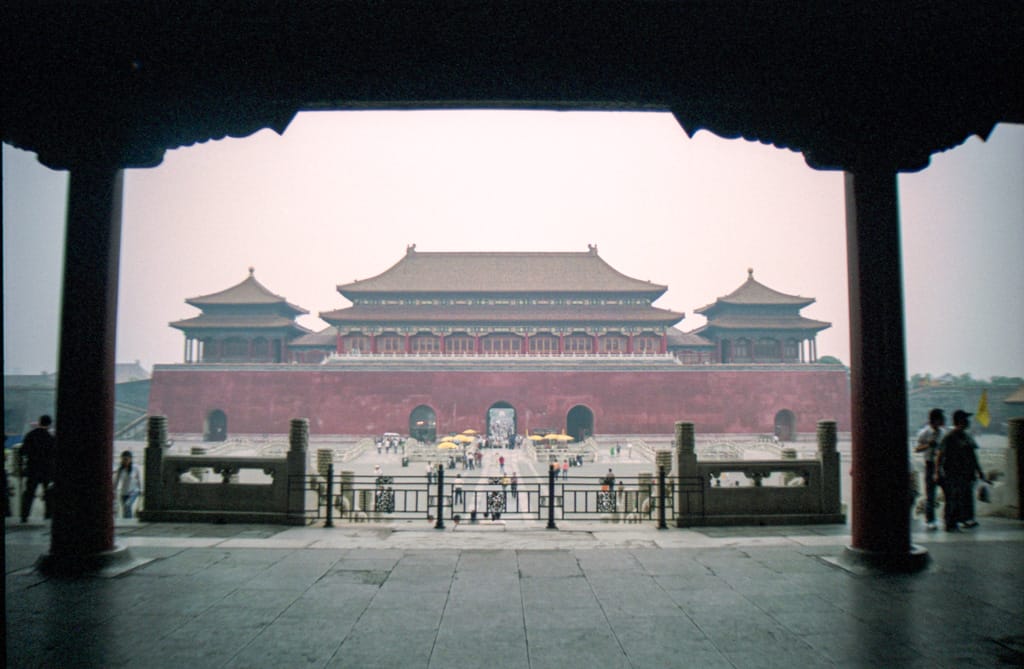 Barely halfway into the tour, thunder rumbled. We’d had a thunderstorm last night, and it looked like we hadn’t seen the end of it. Sure enough, just as we reached the end of the tour, the smattering of rain we had been receiving turned into a deluge. When it finally let up a bit, Amy and I darted out from our shelter under one of the many covered patios and made a break for the exit and a taxi. Not wanting to get stuck with some schmuck trying to rip us off, we decided to walk down the block a bit. We had vendor after vendor offer us umbrellas and carts and bicycle-rickshaws try to pick us up and get us out of the rain. We pressed on. It started to hail, but we pressed on. 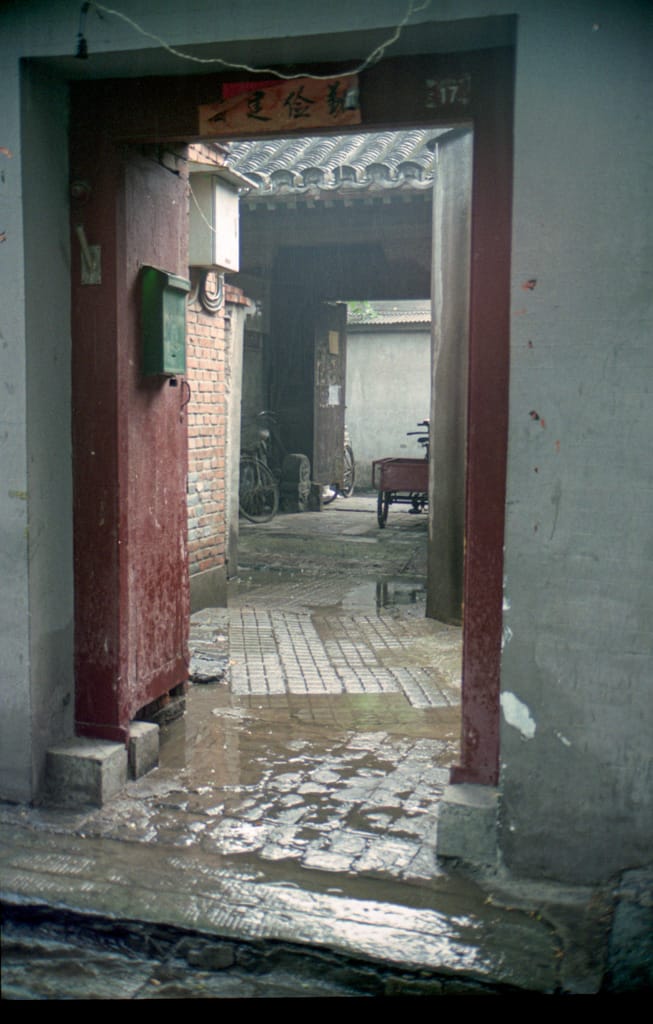 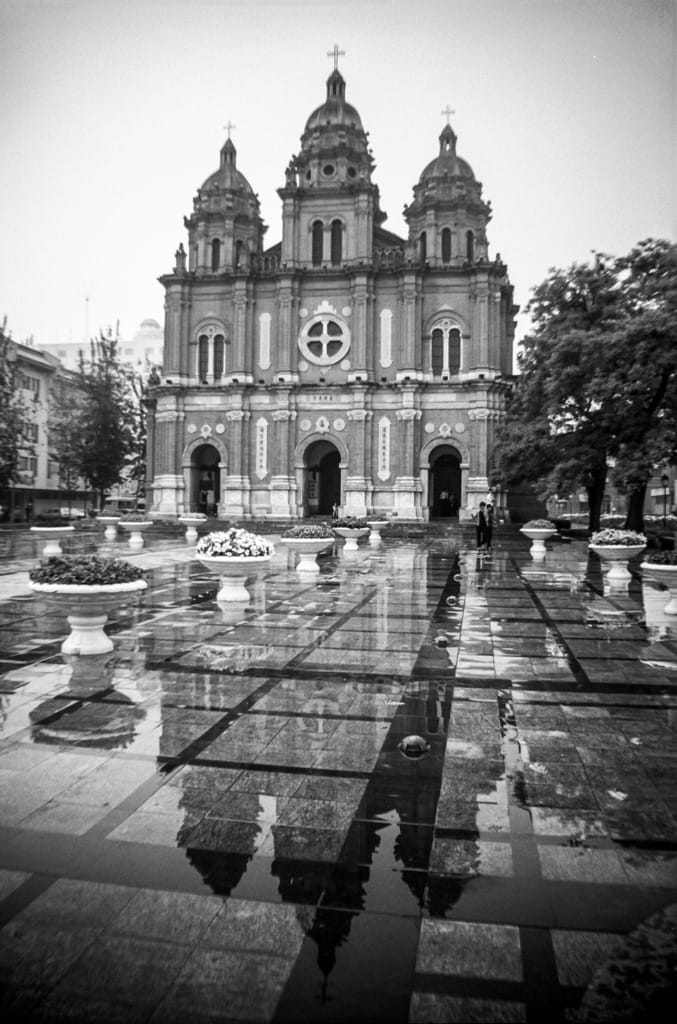 Finally taking shelter under an eaves down a road on the east side of the City, we contemplated the fact that we were soaked. Our bags, thankfully, are built well enough to prevent leakage. Our clothes, not so much. When the rain finally let up, we headed back to the hotel to rest up a bit. A dip in the pool, a shower, and we went in search of the nearby mall for dinner. We found a bakery and the illusive BBQ pork buns. It took us until today to find these tasty little morsels. But when we tried to leave to go home — more rain. Torrents of us. We holed up in the Grand Hyatt’s lobby lounge (the hotel is attached to the mall) until it passed.

Tomorrow, we’re going to check out Dead Mao, and possibly the Summer Palace. One more full day, and then we’re off to Shanghai!