Monday, 30 May 2005
[This entry originally posted on How To Get Lost: Hiking the Great Wall of China.]

Amy’s feet self-destructed yesterday. And as you’ve already read, the state of her feet prevented her from coming to the Wall today. So why did I go without her? We’d already made plans with Noah and Justin, and this was their last suitable day for the trip. Amy effectively told me to get lost and have fun without her. I didn’t particularly like this arrangement, but I couldn’t argue with her logic, either. It was entirely possible if I didn’t go today, neither one of us might get to go.

Noah and Justin were in the lobby waiting for us. After explaining that Amy would not be joining us for the hike, we sat down to the task of deciding where were going. There are several sections of the Wall in close proximity to Beijing, and the key is to find the "right" one. The reason for the quotes is because some parts of the Wall are in their untouched state — effectively, falling apart. But they’re authentic. Other parts of the wall, such as Badaling, might as well have a pair of mouse ears slapped on ’em with "It’s a Small, Small World" playing for all the authenticity there might be.

But we wouldn’t leave from the New World Beijing Courtyard, our hotel. The concierge there, although nice, doesn’t have a good enough grasp of English to answer the questions we generally pose to him. As such, Justin, Noah, and I hopped a subway to return to the Grand Hyatt.

First rule of North Americans travelling abroad to places where they don’t speak the language: Find the finest American chain hotel you can. Find the concierge. Dress as nicely as you can, look clean, always act polite. You’ll get exactly the same service as you would if you were staying at the hotel. Especially here in China, the process works pretty darn well. Not only did Thomas arrange for our car (not even a taxi — this was pretty fancy), but even gave us three umbrellas in case in rained. I really wonder how many umbrellas Hyatt loses because of things like this?

We were going to the Mutianyu Great Wall. We’d wanted to go to the Huanghua (Huanghuacheng) Great Wall, but we were told it was "closed". (This meant, as we would figure out later, that it’s not ideal for "normal" tourists — the Wall has received no restoration there.) Simatai would have been a fine alternative, but the distance away from Beijing proved to be the killer for that destination.

The drive out took a little over an hour, passing through all sorts of interesting places, even passing through the Beijing airport. (They have strange highways here.) As the driver didn’t speak English, we babbled amongst the three of us. When we arrived at the No. 1 Parking Lot of Mutianyu, we realized very quickly that this wasn’t what we’d been looking for. There were a lot of souvenir stalls, there were large signs in English and Chinese ... there were cable car rides to the top. Disheartened, but not defeated, we negotiated with our driver for a bit of extra time — we somehow knew we’d need it.

We soon found out there were two companies offering rides to the top of the wall — a chair lift company competed with the cable car. We chose the chair lift for no reason other than it was the first in the line. It also put us face-to-face with some guy dressed in an "authentic" ancient Great Wall Guard uniform, wanting a photo with him. We offered to get it on our way back down. (We planned to walk.)

At the top, we ran into the first of a string of "Hello! Cold water! Cold Coke! Cold beer!" vendors. The experience was getting worse by the second. These guys were almost as pushy as the vendors at Silk Street, the day we’d met Justin and Noah! We pushed past and walked up a short set of stairs (which we presume to be on the "inside" of the Wall) to climb out onto the causeway.

It took a moment to sink in. Ever watch water soak up into a paper towel when you lay it on a spill? Nothing happens at first. Then you see a slight mark, which expands — slowly at first, then quickly — to fully absorb what it was placed on? That’s what it was like for me. It actually took me a moment to realize that after 16 years of dreaming about it, I was now walking on top of the Great Wall of China. I actually jumped for joy. I then immediately felt bad that Amy couldn’t be there to experience it with me.

You have no idea how guilty I feel about today. I know Amy says she had a pretty decent day, all things considered, but this was part of the plan from when we started planning this well over a year ago. We were going to be on that wall. We were going to experience this. Amy, as it turns out, was sound asleep (having gone back to get) as we pranced around the 500 year-old construction.

We walked towards the #20 tower (the towers are numbered, assumedly to make it easier to figure out where you’re going), finding the walk quite easy. The tour buses hadn’t arrived yet, and the sun was still trying to burn through the intense haze and pollution that keeps this area of China under a heavy blanket. The walls here are restored — the look like they probably did 500 years ago, when the Wall was still in use. The tiles are neat and clean, the towers mostly intact — some don’t have stairs to the upper decks, but have restored roofs. We weren’t sure how "authentic" all of this was, until we entered onto an unrestored section past tower #1 — it would appear that the Walls mostly needed only a cleaning: removing trees and shrubs, and reconstructing collapsed towers. 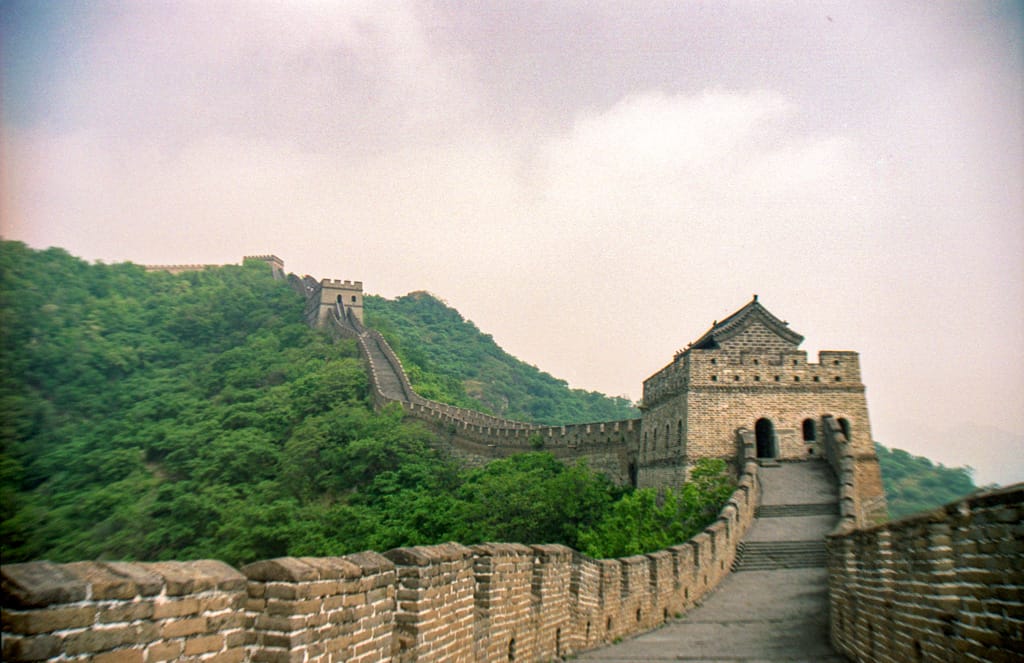 The Wall is anything but flat and straight in this area, and follows the contour of the mountains. This means slight slopes and rises, along with steep climbs and falls. We were at Tower #17 or so (where the cable car connects with the Wall) before we stopped to turn back. This is where we met Dave, another Calgarian who’s taking travelling to another level. Dave left Calgary in February. He won’t be back until July. There’s no way I could stay away that long — these few weeks are killing me from being apart from Alex. (I definitely won’t be doing this ever again!) Dave started in Thailand and has been going overland since then. The night before, Dave had slept at Tower #22 in the "non-tourist" section of the wall.

Dave also taught us a new saying: "bow shur", which effectively means "not interested". Saying "no" or "no, thanks" doesn’t get vendors to leave you alone. They keep after you until you’re quite a distance away, at which point we’ve heard them swear at us a few times. Saying "bow shur" (I assume the correct pinyin is something like "bao xur") usually gets them to back down almost instantly. Dave was telling us his stories of travelling around, and I started to feel like a complete poseur.

Sure, Amy and I have done something most others have not. But amongst many of the other people we’ve met, we’re barely scratching the surface. We don’t go to the deep, unexplored parts of the cities we visit (camping in Mongolia being an exception); we don’t try the unusual experiences (Dave went to Thailand to learn how to box); and we don’t really live on the edge — we’re at a business hotel! I guess I have to resign to the fact that we’re doing something interesting, and that I’m truly comfortable with it. Because, really, I am.

Dave departed down the mountain at tower 8, with the rest of us continuing towards tower 4, which is castle-like. But once there, we kept going, and climbed up an insanely steep section until we were at tower 1. Beyond that are the non-tourist sections. You’re technically not supposed to go there, but there’s nothing preventing you from going. So we did. 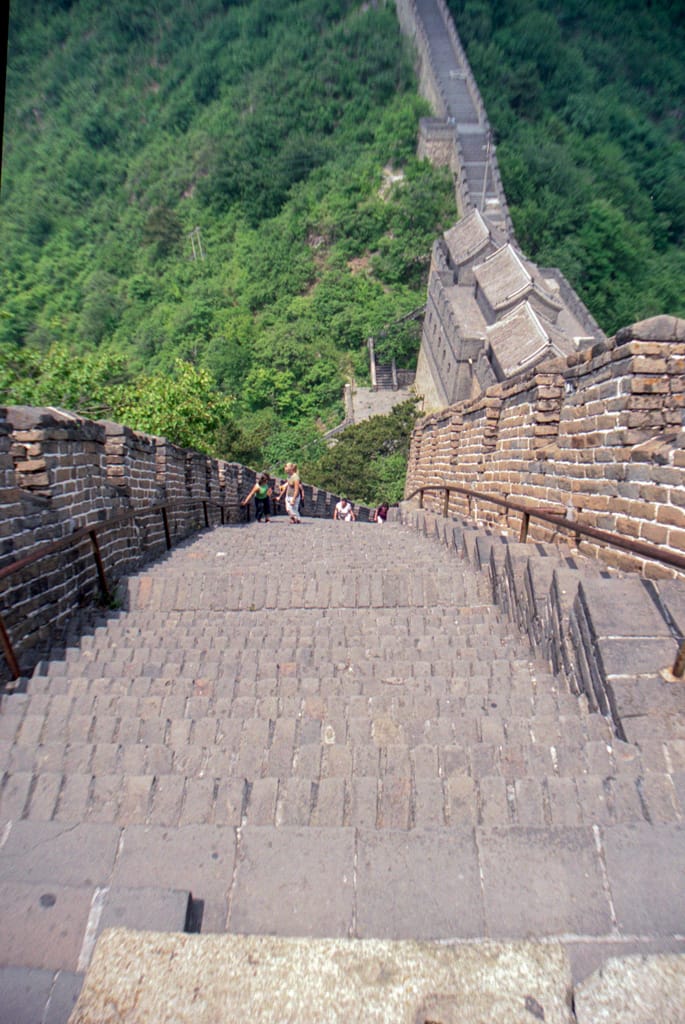 The non-tourist sections look pretty much the same as the tourist-friendly sections. The walls are effectively the same — the notched walls at the side of the causeway are the same, the tiles are the same, and even the towers look the same. The major difference (collapsed towers aside) is the fact that you have to walk a narrow pathway, weaving around shrubs and plants that have overgrown large parts of the causeway. Here, plants grow fast. We walked out to the collapsed tower beyond tower 1 for what I can only describe as the most amazing view. I hope the pictures turn out. 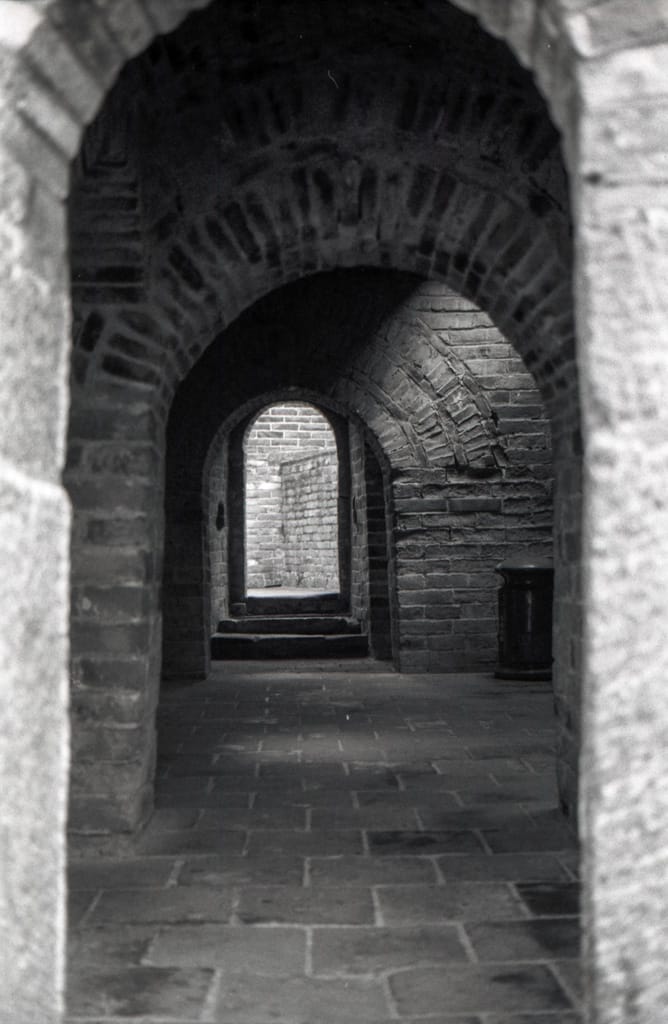 We walked down the mountain via about 900 stairs. The vendors were on us in a blink. We pushed past to a small cafe to get bottles of water. The heat there was terrific. We were roasting alive on the wall, especially with the physical exertion. We downed our water in mere moments. Finding our trusty driver, we returned to Beijing, but went to the Courtyard instead of the Hyatt. Amy was waiting in the lounge.

We had hoped to meet up with Dan and Colin, two Canucks we’d met on the train into Beijing, but had pretty lousy luck getting a hold of them. Eventually, we decided to forego with the meet, so the four of us headed out for dinner and a movie. (We wanted to sit in an air conditioned room.) The food: Chinese, of course. The movie? "Star Wars: Episode 3".

I figured that after all these years of watching Chinese movies with English subtitles, I had to watch an English movie with Chinese subtitles. The jury’s still out on the movie, though.

Justin and Noah are off to Shanghai tomorrow. If we’re lucky, we may cross paths with them in the future. If not, we’ll always have the memory of a strange dinner of salted peanuts, beef tripe, and something that resembled kung pow chicken.