Wednesday, 25 May 2005
[This entry originally posted on How To Get Lost: Adventures in Mongolia.]

We’re back in Ulaan Baatar after a few days out in the Mongolian wilderness. It’s a brief return — we hit the #24 train to Beijing at 8:00 tomorrow morning. (It’s about 21:30 right now, as I’m writing this.)

Without question, Mongolia has been the highlight of this adventure. Unless something really spectacular comes up that somehow manages to sway us (which I doubt will happen), then Mongolia will be the thing on the trip. Also without question, we would heartily recommend coming to Mongolia (and soon, before the rest of the world discovers how cool this country is) and signing up with Nomadic Journeys. They take far too good care of you.

Our campsite was about 300 km west of Ulaan Baatar — a trip that takes six hours. Most of the roads in Mongolia were built back in the 1950s by the Russians and Chinese ... and haven’t really received any major attention since then. Needless to say, if you’re not driving something well-built, you don’t be driving it too long — the roads will turn them to pulp. We drove in a small Russian-built jeep without seatbelts. Our driver, Lasaa (assuming I’m spelling his name correctly) is an expert driver, and avoided the majority of the disasters of the road. That meant driving all over the road, including the shoulders. 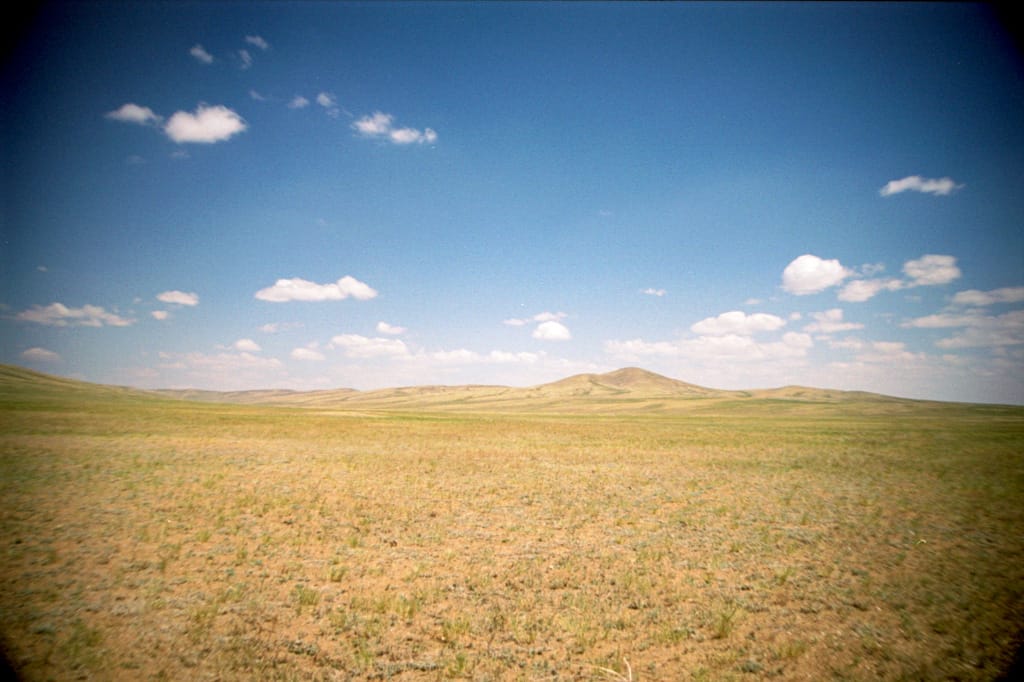 It’s an interesting commentary when the dirt roads that sometimes parallel the highway are better than the highway.

When we arrived at our camp (which appeared rather suddenly), we found three gers, tents used by the Mongolian nomadic people. They’re wood-framed, built in a circle with a sloped conical roof. The entire frame is covered with felt and canvas. They’re ridiculously comfy, even in the heat we experienced. Amy and I were the only tourists there — we’re the first of the season at that location. There were two nomadic families across the valley. 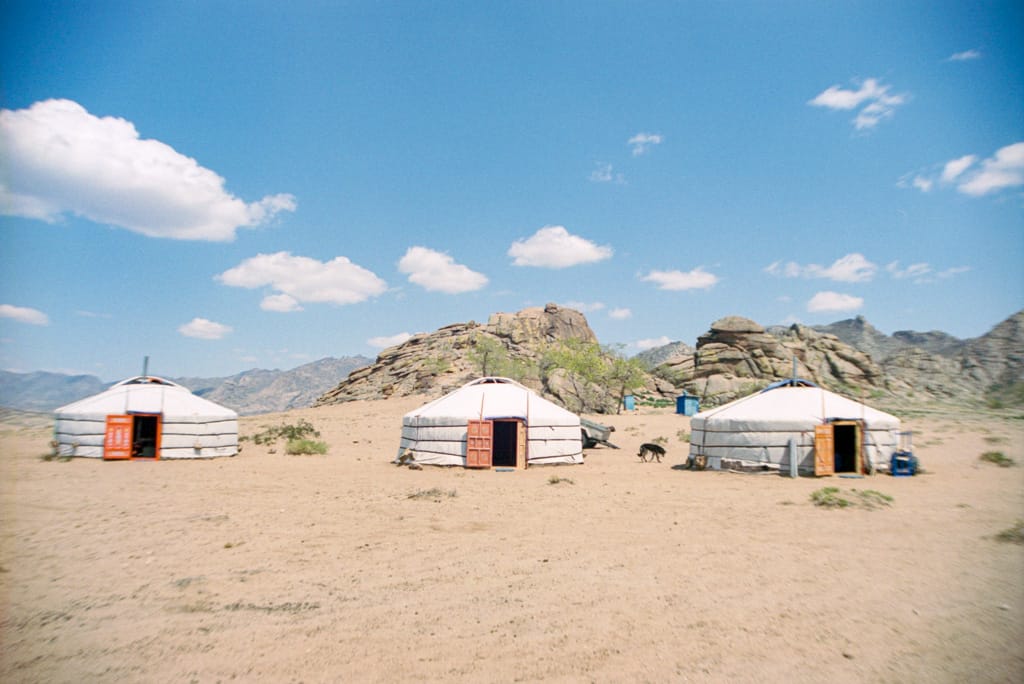 The first day there was a laid-back one: hiking up the adjacent mountain (Amy to half-way; I couldn’t resist the surge to the top). Meals were in the middle ger. The second day took us on a hike north through the valley, passing a family of domesticated camels, and through a mountain pass to a small Buddhist temple on the other side (Lasa met us there to drive us back). The temple has but a single nun (not even a monk, so far as we could tell) and a museum curator, who showed us around. There’s ruins there from a previous building destroyed when the Soviets ran amok through Mongolia in an attempt to stamp out all religion. 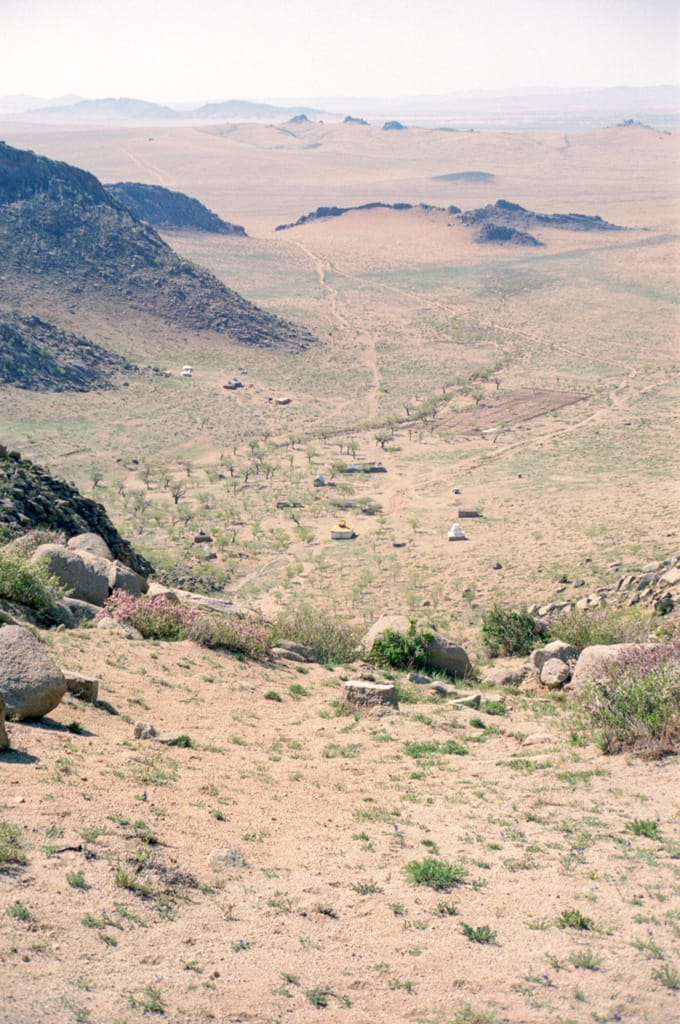 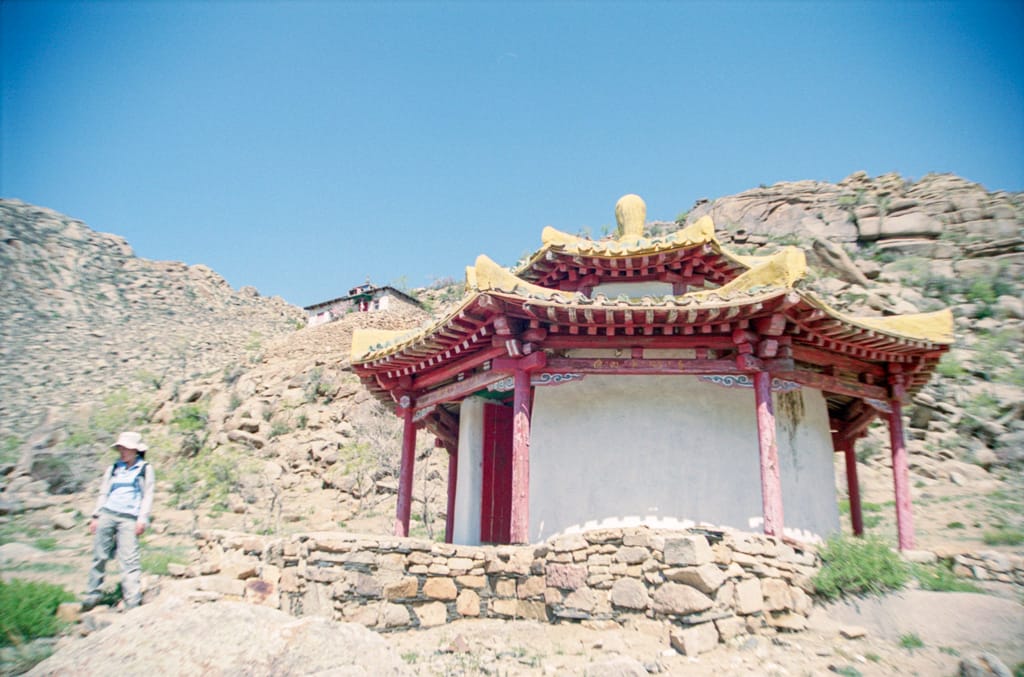 To give you an idea of how unspoiled this place is, when we wandered around the ruins, we found fragments of Buddha statues and artwork still in the dirt. That’s how few tourists have been here. (Even though there is a "card shop".)

After lunch, we visited a small lake featuring kites, ducks (that sounded like frogs), and horses. Beautiful scenery, too. Then it was a visit over to one of the nomadic families to see how they live. Truth be known, they live pretty well. The gers are so comfortable, most nomadic families choose to live in them instead of permanent shelters. It’s also necessary as many families have to move (up to four times a year) to keep their herds of animals fed and watered. We petted baby sheep and goats. One tried to milk me by banging it head repeatedly into my groin. I mean, honestly, do I look like a goat?? After dinner, Amy and I dragged Ganaa (our guide/translator) up the side of a sand dune to watch a sunset. We were treated to a rather strange spectacle when we returned as the nomadic family tried to get their herd into a small corral for milking time. 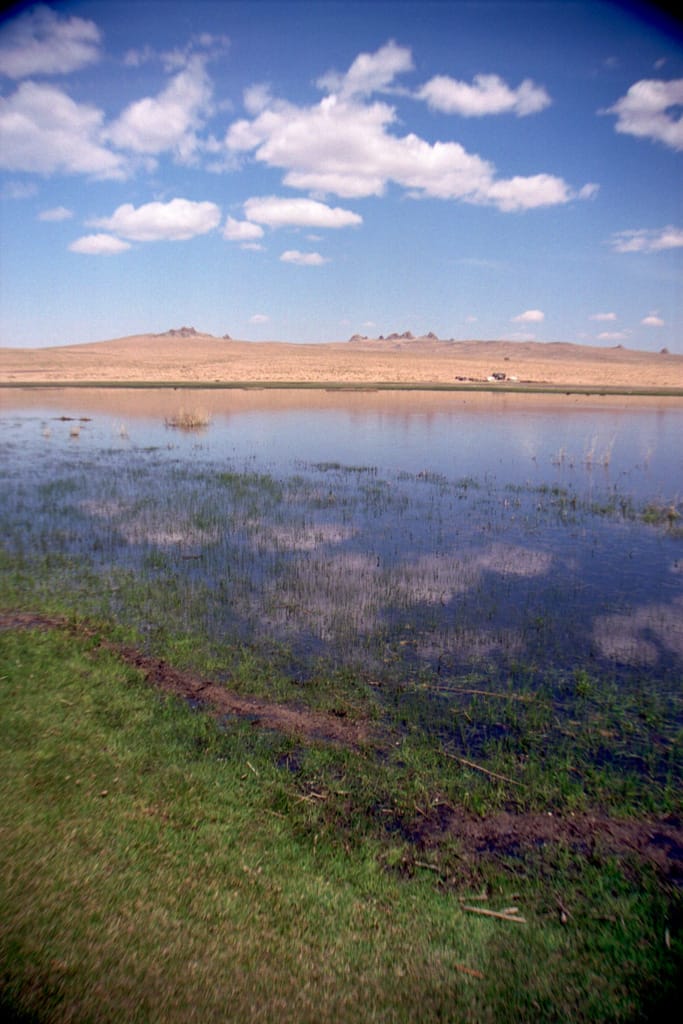 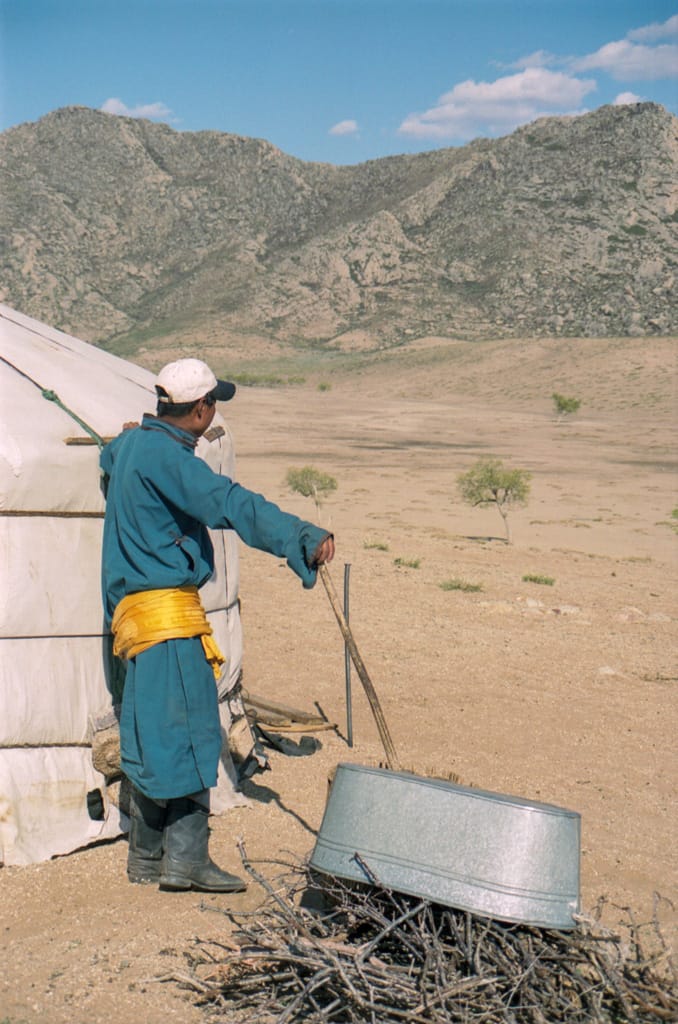 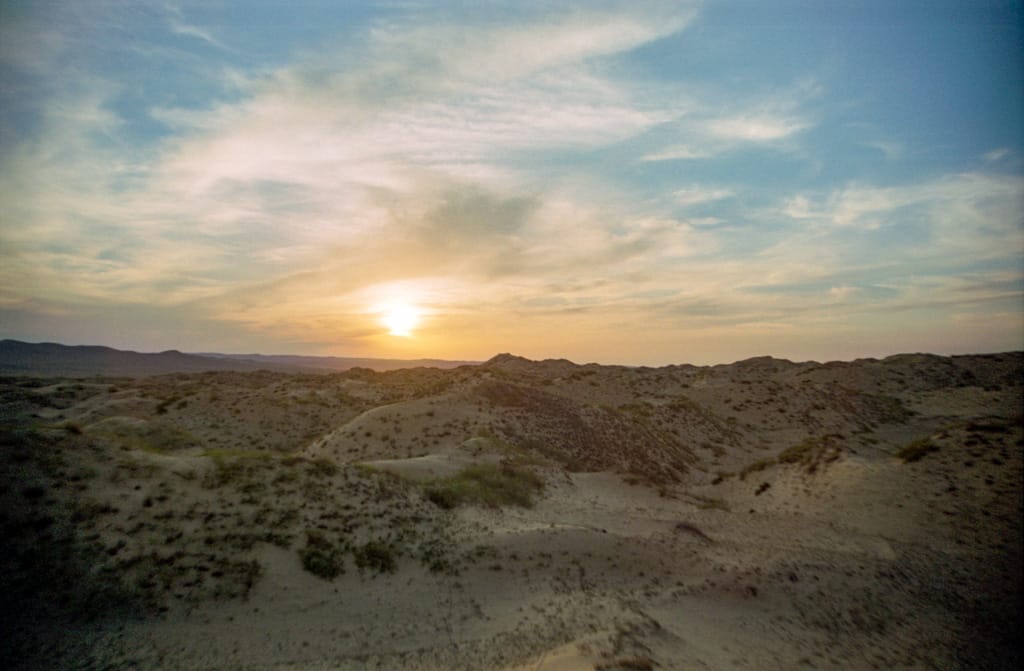 Our third day marked a trip to Kharakorum and Erdene Zuu, the former being the ancient capital of Mongolia, and the latter being the monastery that still operates there. Three hours on bumpy roads. Beatiful buildings, though. Amazing part of it was that we were among the first tourists there that day — most of those in attendance were there for the ceremony marking the first 15 days of summer, which was the monks chanting the entire day. The fact we could walk around the museum temples unimpeded by a single tourist was ... very zen. 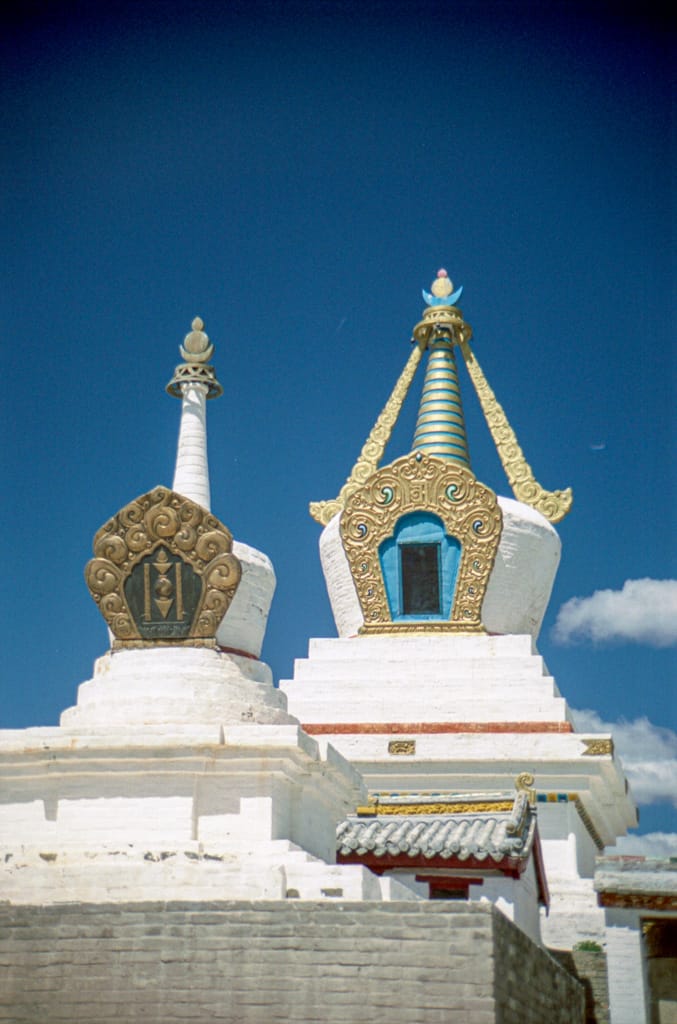 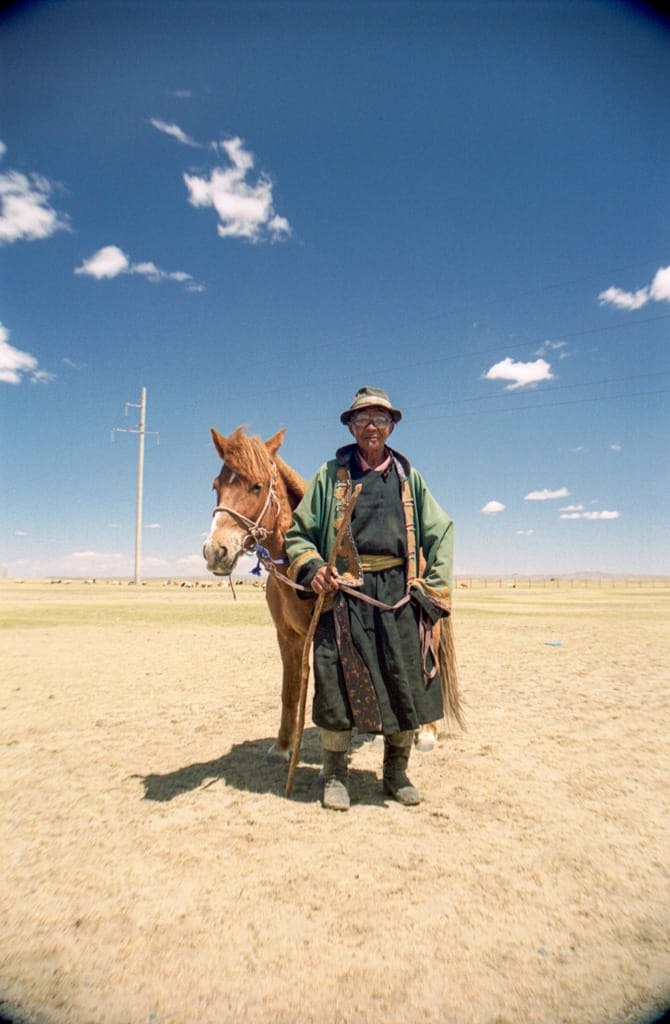 The weather on the morning of our fourth day was unbelievable. The wind that had started the night before had given rise to rain, blowing sand (you couldn’t see the dunes — a mere kilometre away — for the clouds erupting from them), and eventually snow as we rolled to Hustai National Park, 95 km from Ulaan Baatar. 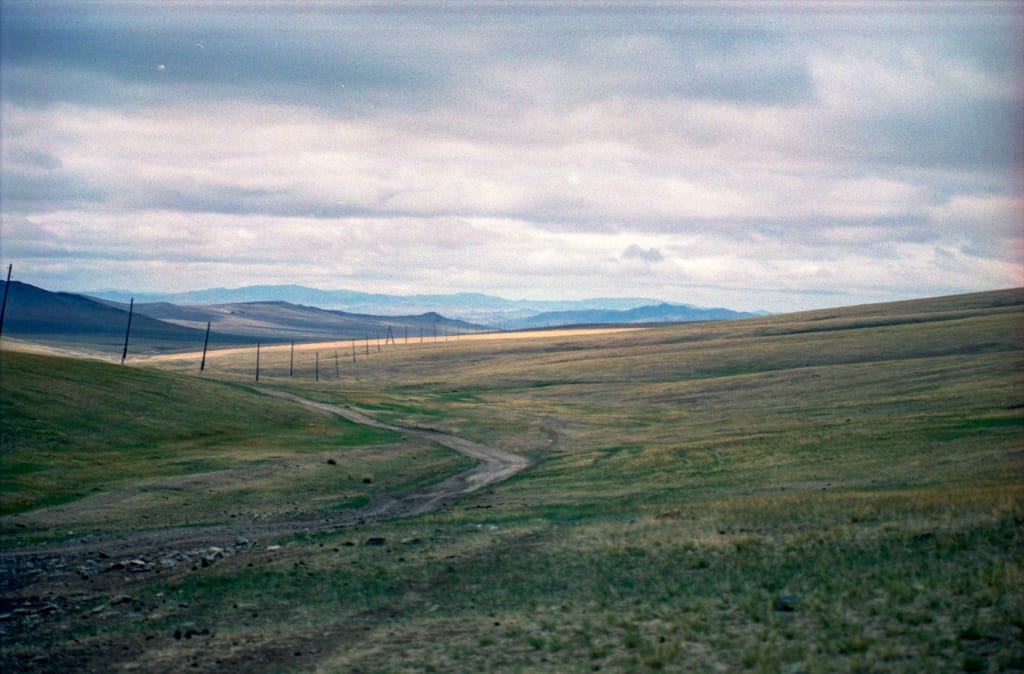 Hustai is a preserve that hosts the only wild population of tahki — the Mongolian wild horse. It was reintroduced here in the early 1990s, and has grown to over 200 horses in 14 small herds. (That, and an insane number of marmots.) It was freezing as we got our glances at a distance, but they were neat to see. We stayed in Ger #7 at the Hustai Tourist "Resort". (About 20 gers, a couple of permanent buildings, and a "restaurant" serving food so lacking in flavour, I’d describe it as a gastronomic vacuum.) 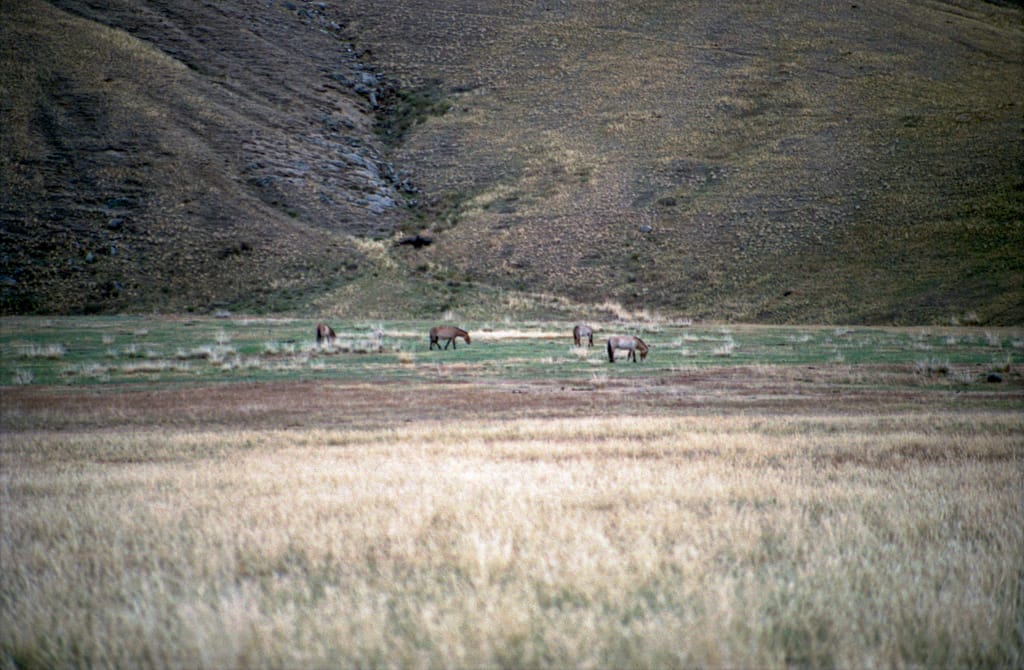 I woke up about 3:00 this morning in a big shivering ball. Our fire had gone out and the temperatures had plunged. Needless to say, I’m a little tired as a result. Even once I was more bundled up (and I was beginning to think that long underwear wasn’t a good idea to bring!), my brain ran crazy with ways of trying to rekindle our dead fire. Note to self: always bring matches in the future when going to places that need fires.

We returned to UB today and made a beeline for the Gobi Factory Store. Gobi is the major manufacturer of cashmere goods, at least in Mongolia. I knew of them before coming, but hadn’t really thought that this was the place. It really was a factory store, too — the store was attached to the Gobi factory. Prices were decent, although the place was mobbed by some very unruly and rude French tourists.

The real prize, however, was not the completed fabrics. It was cashmere yarn, which Gobi does not sell in their stores. And Amy could not leave Mongolia without it. To get it, Ganaa went through the most amazing display of digging that I’ve ever seen. It took 90 minutes, including walking deep into the Gobi factory to find the yarn storage room to select the spools, but we walked away with 2.3 kilos of it. Amy’s happy, to say the least. But I’ll leave that portion of the story to her. It’s a doozy.

After that, we visited the Bogd Khaan’s Summer Palace in the south part of the city. It’s nice, but poorly maintained. Some of the treasures inside are wonderful, but it wasn’t worth the 5500T it cost for me to take pictures (even though that’s only about US$5). After Erdene Zuu, it was hard to look at the Summer Palace and think it was wonderful. 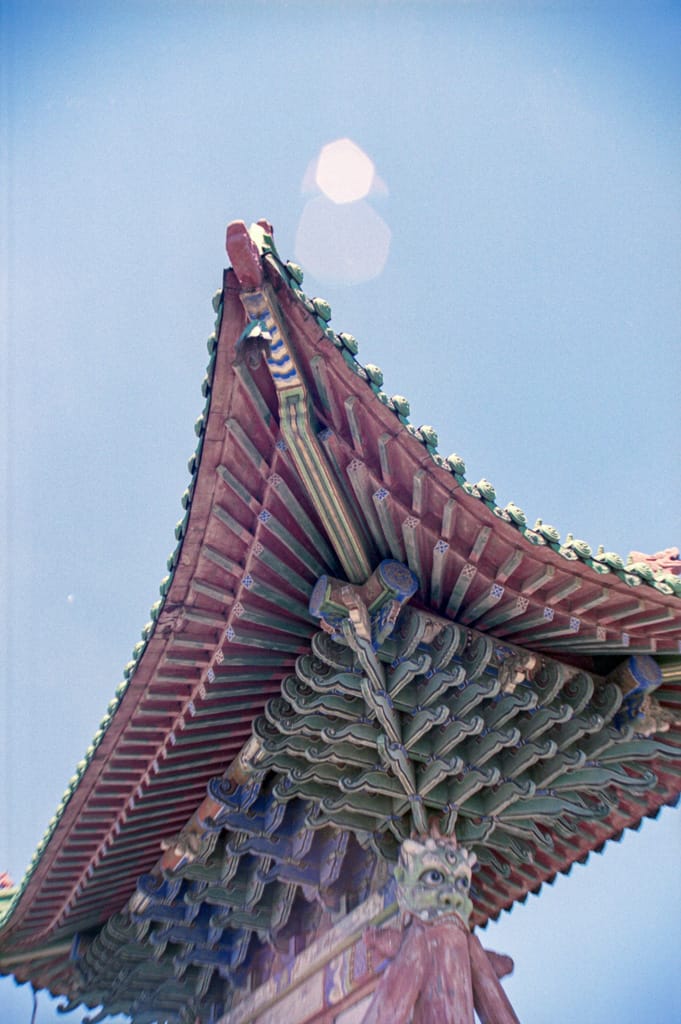 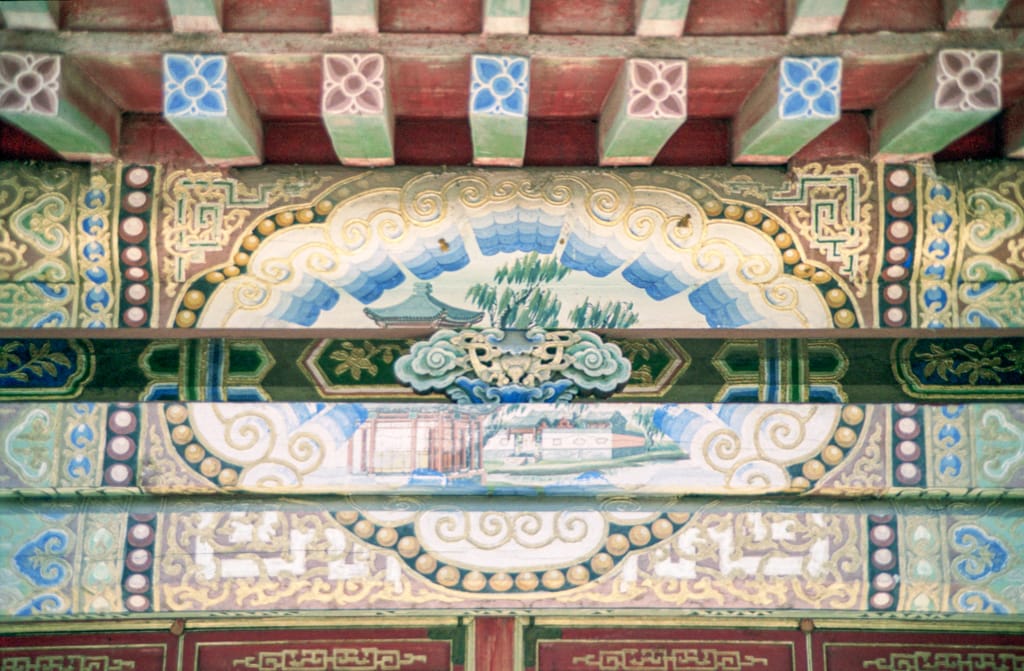 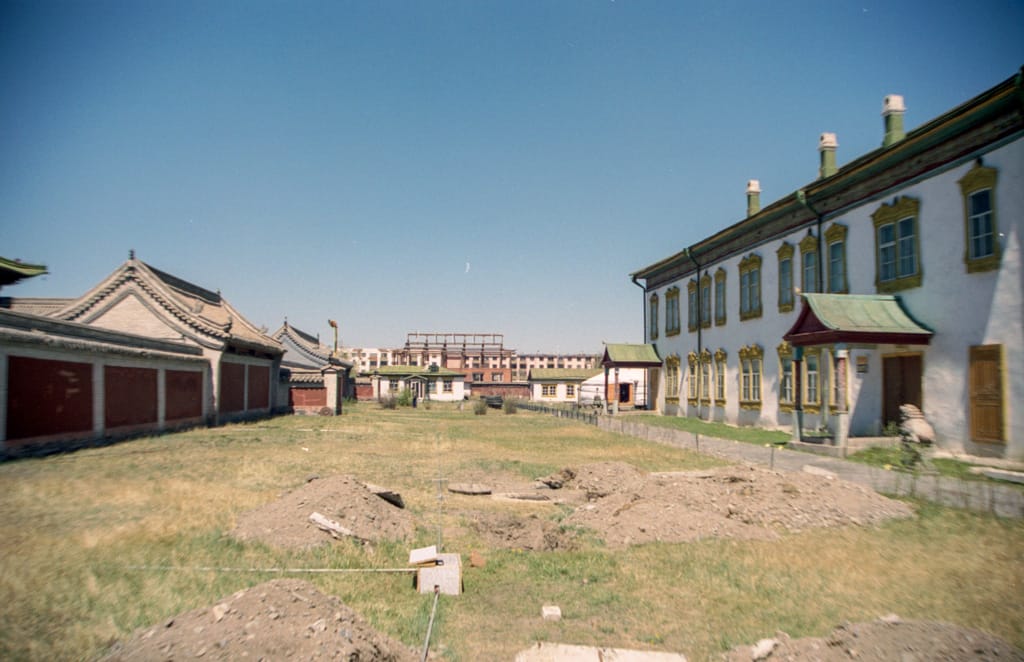 And so we leave Mongolia for China. Our plans have changed a bit, there. We’re hitting only Beijing, Xi’an, and Guangzhou (only because it’s right next to Hong Kong, and after the train from Xi’an, we won’t be up to crossing the border right away). Then it’s into the Hong Kong area, first with Macau, then HK proper. Why the cutting back? Too much running in and out of places has made us weary, and after hearing a few too many horror stories, we’re not sure that we’re even going to like China that much. But we shall see...