Wednesday, 18 May 2005
[This entry originally posted on How To Get Lost: Da svidanya Rossiya.]

Well, we’ve reached the end of our time here in Russia. Tomorrow morning, early, we’re off to Mongolia. And a 10+ hour border-crossing, so we’re told. It’s simultaneously a horror story and a quest of patience, so it seems.

After we arrived last night, literally 10 minutes into being in our new hotel room, the phone rang. It was "Helga from St. Petersburg". Being more than just a little out of it, I assumed Helga was our tour operator, and was arranging our tour for tomorrow. She said she would be in the hotel, and we could meet her in the "cafeteria" (more like a bar with food). This was great since she had our train tickets to Ulaan Baatar, and would give us the details for our tour to the Datsun — the Buddhist template near Ulan Ude.

We walked into the cafe (as it’s referred to) about 20 minutes later only to find, much to our deep surprise, Helga — the woman we’d met in St. Petersburg whom we’d tried very desperately to avoid. (Helga had originally asked for all the details of our trip so she could tag along with us, not wanting to do the trip alone. We weren’t particularly happy about that, since we’d spent so much time and effort planning to this as a duo — not a trio.) This was not the surprise I’d wanted.

Since Helga had some of the information we needed, we opted to talk with her until she left for her homestay, some distance from the Hotel Geser. Why did she have all this information? She ran into the tour guide we were using, and had signed up for the same tour to the Datsun.

The trip out today was quite nice, actually. Ulan Ude is in a steppe valley, which is wide, expansive, and fairly flat. It’s dominated more by dacha (small cottages). Otherwise, short grasses and free-roaming animals (cows, goats, horses) which are "owned" by the local buryat inhabitants. The region we’re in is named for them: Buryatia. They’re an offshoot of Mongolian society, who’ve decided not to be nomadic and settle permanently.

The result of the Mongolian influence in this area brings the Buddhism, which is what we’d planned to see today. Ivolginsky Datsun dates back only to 1947, when Stalin (of all people!) allowed limited religious practices for recognized minorities, such as the buryats.

On the 30 km drive out to the Datsun, our guide Ilyena (I believe that was her name) attempted to explain the history of Ulan Ude, the general environment around us, and the basics of Buddhism. All of which Helga continually interrupted with questions — some decent, but mostly inane. And annoying, since Ilyena was continually put off her speech, and found it difficult to continue. Thankfully, Amy and I have a good understanding of Buddhism, and had read much about the area through our guidebooks.

The Datsun itself is quite interesting. Because it was built only a little over a half century ago (and even then, the main temple burned down just before it initially was to open), most of the buildings are reminiscent of Soviet construction: big and stolid. Yet there is still a blending with Buddhist stylings, with all the statuary and stupas one would expect to find. Though here, they’re made of concrete and not wood or stone. The insides of the temples, though still Buddhist, borrow concepts from Russian churches (such as windows and high ceilings), a result of Russian influences on the Buryats when they tried to settle in the area. 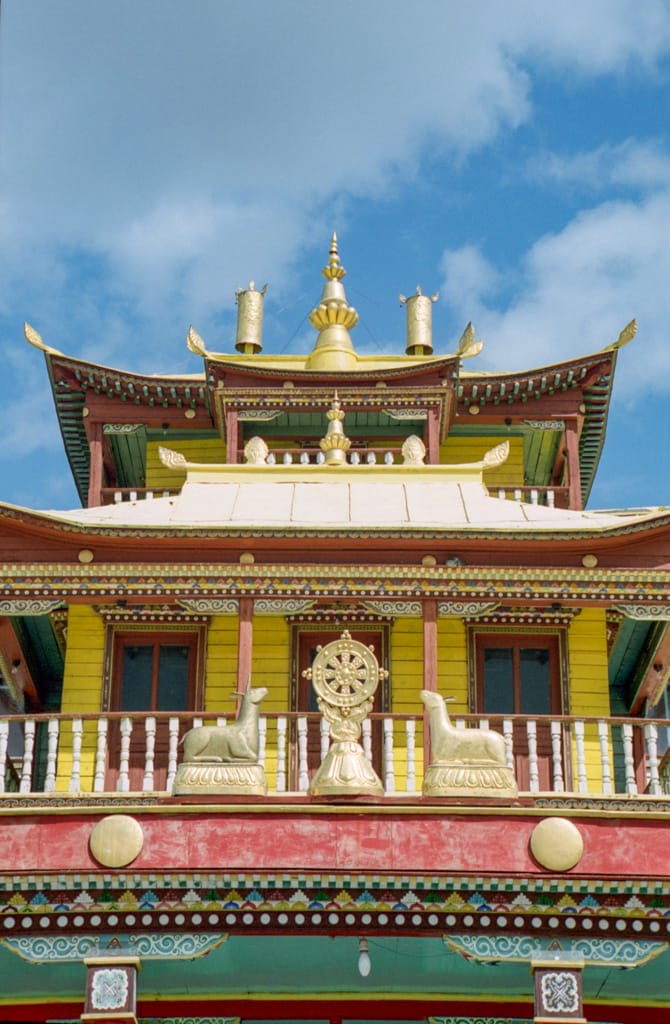 There were few other tourists there than ourselves, so we had a fairly easy time getting around. Although Ivolginsky Datsun is the centre for Russian buddhism, it’s not heavily visited at all times. There are strong ties here with both Mongolia (which is a very powerful buddhist centre, so I’ve learned) and, of course, Tibet.

On the way back, we got to ask Ilyena a few questions. Well, to be most specific, Amy and I got to ask a few questions — Helga wouldn’t let up. To the point where she was outright challenging Ilyena about the differences between hardships under Soviet rule versus Helga’s post-war upbringing in the late 1940s – early 1950s. It was enough for me to bite my tongue — hard — and not suggest that Helga put a cork in it. It’s enough to ask questions, but an entirely different thing to disrespect your hosts by suggesting their troubles in life are trivial.

We finally ditched Helga, and picked up our train tickets for tomorrow, and went off to explore the rest of Ulan Ude. Admittedly, there isn’t much else to see in this city, save for two museums that aren’t easy to get to. Across the road from our end-point was a nice opera theatre that looked almost like it had been plucked out from Spain. Next door to that was the Mongolian Embassy. 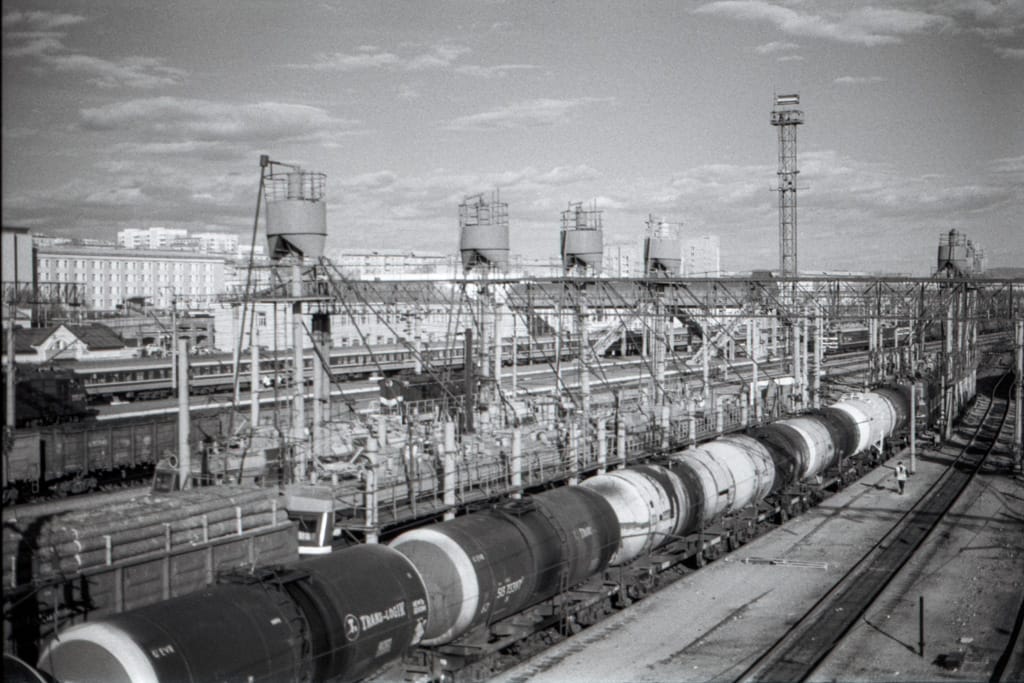 Down the road (to the south) was the GUM department store and market — of which there wasn’t much. However, there were delectable blinni — which are crepe-like packages filled with (in our case) cheese and ham. The pedestrian mall took us down to a recently-renovated church, before we walked back towards our hotel, and the world’s largest Lenin head. 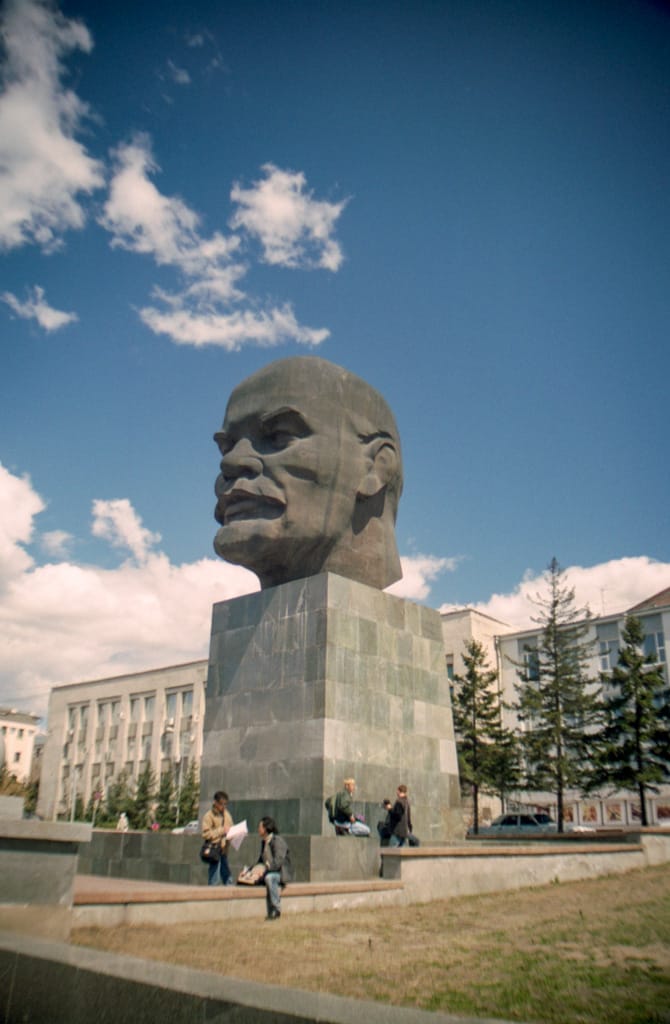 Why is the world’s largest Lenin head in Ulan Ude? Got me. I can see it from this computer. It’s HUGE. It’s at least two storeys tall. The body, if there were one, would tower over Ulan Ude. Vlad-zilla!

We’re preparing for tomorrow’s trip. Not just with supplies (food and water), but also mentally. Mongolians like to smuggle things across the border, and we need to be prepared for the possibility that they might try to muscle their way into our compartment — which we bought all the seats in to prevent us getting caught with smugglers.

Either way, the next time you hear from us, we’ll be in another country.