Monday, 16 May 2005
[This entry originally posted on How To Get Lost: Listvyanka and Lake Baikal.]

The cold seems to be slowly moving away. It hit me a little harder than it did Amy, so while she dealt mostly with the sniffles, I’ve been dealt the ol’ phlegm-attack. Mostly throat clearing, so it ain’t all nasty.

Until today, I had yet to cash any of my traveller’s cheques. Useful things these are not. Major problem: very few places in Russia care to honour them. You have search high and low to find places that will handle them, and not for an obscene rate of conversion. It’s silly, really. In future, I’m sticking to my usual system: bring a bank card. It’s accepted at most ATMs world-wide, though you do sometimes have to hunt for the right ones.

After that, we got our visas registered for Irkutsk. It’s a leftover from the Soviet era, so far as I can understand. Basically, any place you stay overnight, you should have your visa registered by your hotel or by the registration office. What ultimate purpose this serves, I have no idea. All I do know is that if your visa isn’t suitably registered, and you don’t have all the paperwork, you’re likely to be buying out the border guard as you try to exit. Most importantly, as in our case, if travelling by train.

Jack had double-booked himself for today, and had to take a group out of town on a three-day excursion (to where, I have no idea). He was supposed to take us to Listvyanka, a small town on the shore of Lake Baikal, about 60 kms away. Instead, he made arrangements with his friend Leonid (yes, like the meteor shower) to take us out.

When I’d talked with Leonid last night, I had wondered what lay in store for us. Was he just a "friend", or was there more of a professional association to him? (As Amy has pointed out, Leonid has his own company for this very thing. Normally, he does long-term fishing excursions, but made an exception for us.) He rolled up to Jack’s homestay almost exactly at noon — when he’d promised to be there.

Leonid has a nice car — nice by Russian standards, definitely; nice by North American standards, pretty much. It’s a Toyota Mark II — Japanese model, so far as I can tell. (It was right-side drive.) The sound system was aftermarket, though, and was regularly playing Ivan Kupala — an artist reminiscent of Enigma and Delerium, except that he used the songs of old Russian women (singing old Russian songs) as the main part. Amy and I will be hunting for this CD, without question.

After a short stop at the local DHL (despite packing light, this is the second batch of things Amy has sent home — keep in mind, however, that she did buy 10 balls of yarn in Kazan), we headed out on the sole road from Irkutsk to Listvyanka. It’s a rolling road, curving sometimes within sight of the Angara River, lined with birch, larch, and various coniferous trees.

Our first stop, however, was not Listvyanka — it was the Museum of Wooden Architecture. Sounds kinda silly, I know, but museum is just like Heritage Park (in Calgary) or any other pioneer-esque recreation village showing the way life used to be here. But it’s not all about the stereotypical exiled-Russian-living-in-Siberia thing. This was about the Cossaks, the first Europeans to move to this region. How they built their forts to survive against the weather. And about the Buryats, decendents of the Mongols who settled here in permanent wooden gers. 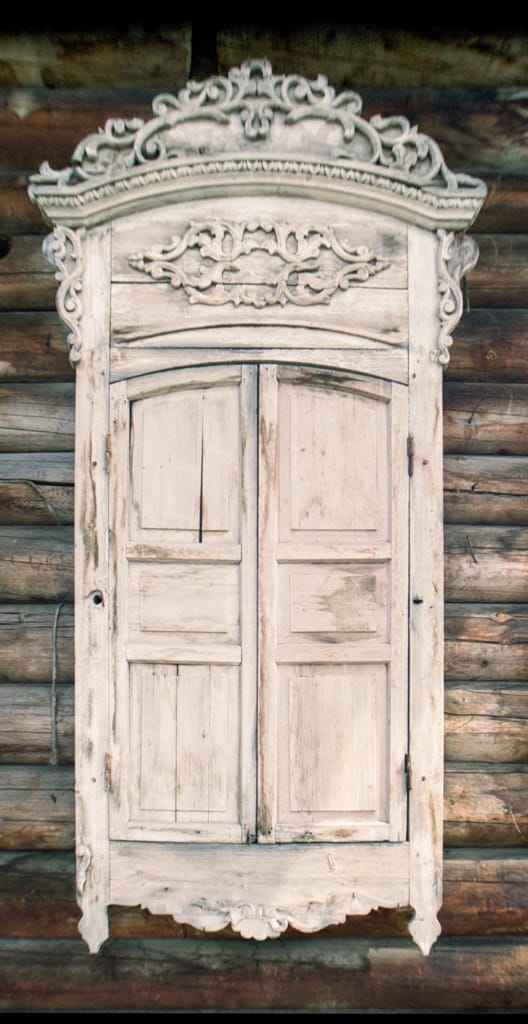 The entire village is made of various buildings, most of which were brought to the museum before their original village locations (often many kilometres away) were flooded out with the damming of the Angara back in the 50s. The reconstruction is mostly complete, and gives a pretty clear idea of what life was like in this region of the world, 300 years ago. 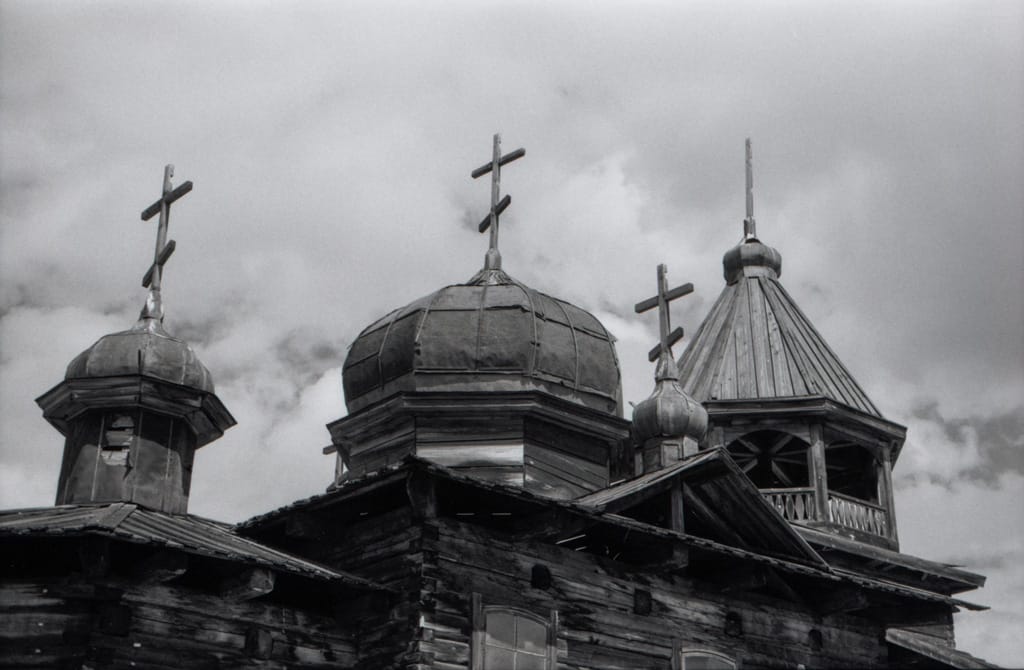 That’s the key difference between what we see at home and what’s here. The stuff we have in Calgary is rarely older than 150 years. This is twice that. The buildings are solid wood — mostly log houses (in various forms). Some are intricate, having several rooms, and separate buildings (for storage of grains and animals). There was a certain flow to everything.

Each building also had what Leonid called a "red corner", which is supposed to be on the right side of the main room when seen from the door. This is what most would call a shrine. It depicts the Russian orthodox religion, and is a personal place of worship outside of the church. Leonid didn’t know why it was a "red" corner, though. I think it’s because the Russian word "красный" originally meant "beautiful" in English. Only today does it mean "red" — and the original meaning is lost in translation.

From the museum, we continued down to Listvyanka. When we reached the mouth of the river, Leonid pulled his car over and told us a story about a rock that you can see in the mouth. The legend says that Lake Baikal has 340 sons, but only one daughter — the Angara River, the sole outlet of the world's largest freshwater lake (by volume). The Angara flows into the Yenisey, and it’s said that the Angara wished to leave Lake Baikal to be with her lover. Lake Baikal refused and threw a stone to keep her from getting away. Today, it’s called the "shaman’s stone". Angara got away, however, and Lake Baikal grew bitter and cold. It’s known for freezing over entirely, and for very nasty storms. 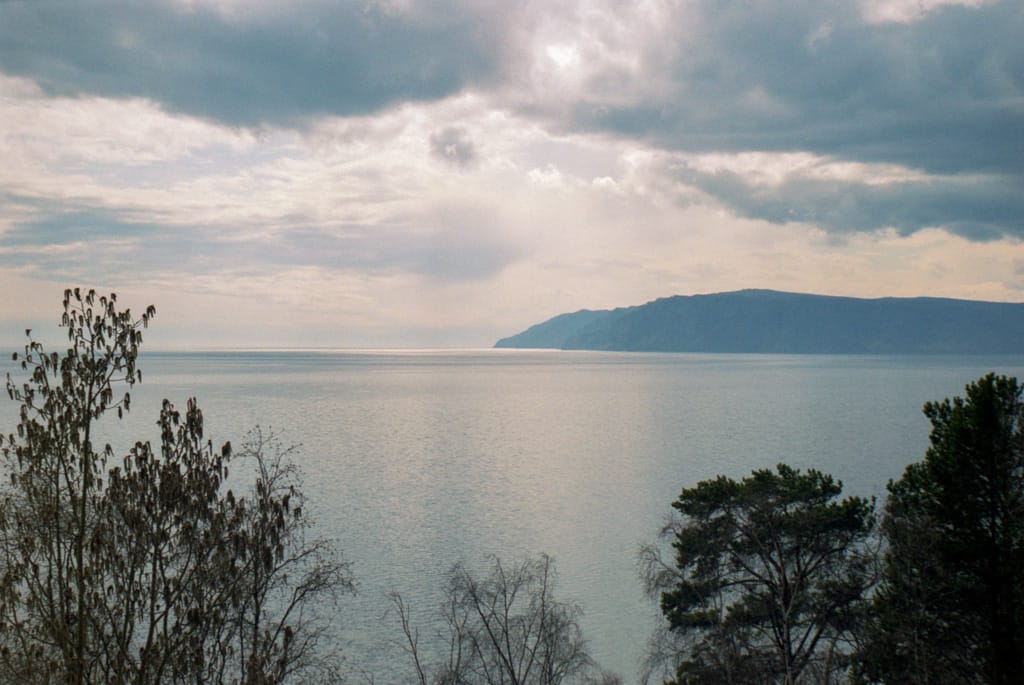 Listvyanka is a town that was forgotten by the Soviet regime — or the town chose simply to ignore it. The entire village is wooden; the original part, anyway. Because of its proximity to Lake Baikal, many of the nouveau riche have bought up land and erected the most gaudy monstrosities you’ve ever seen. They look like someone tried to replicate a fairy tale castle, but used cheap bricks and garish pink paint.

Lonely Planet (among various sources) recommended Listvyanka as a place to visit because it is reflective of an old Russian fishing village. It’s harder to see now, with the newer buildings (and a hotel under construction) that effectively ruin the charm. It was neat to see, but I imagine that within two years, Listvyanka won’t have the same appeal it did even a year ago.

As we drove down the waterfront, we spotted ice washing up on shore. Leonid had told us that as little as three days ago (!), there was still ice on Lake Baikal in this area. Indeed, if you go further north, you can still drive across the lake — the ice will remain until well into June. The ice, combined with Lake Baikal’s ferocity, turned a wooden breakwater into near toothpicks a week ago. 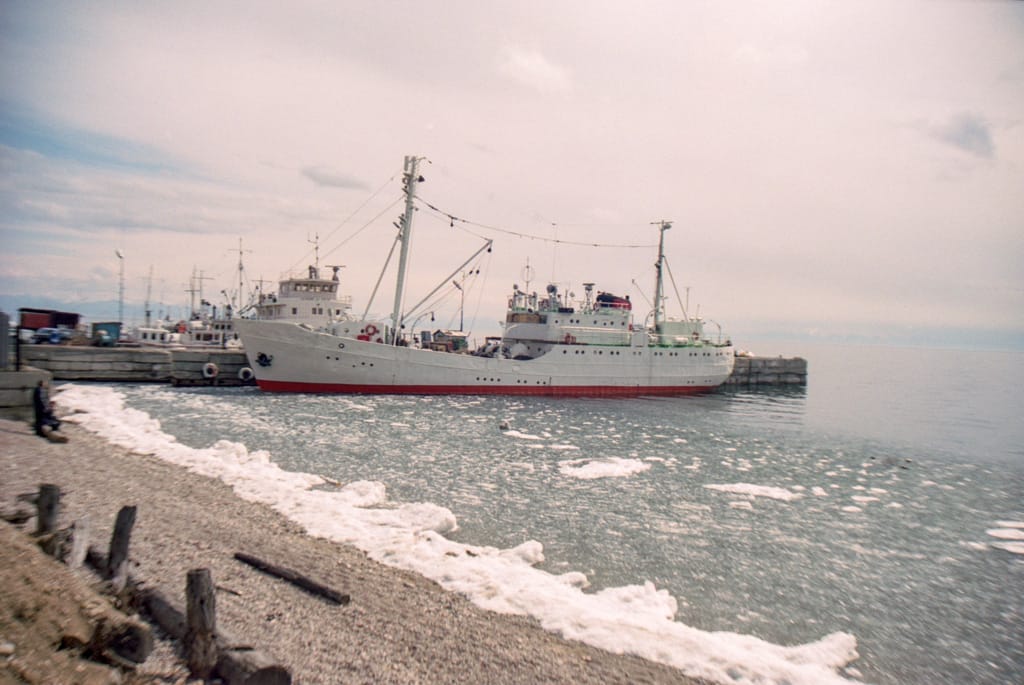 The pier was full of vendors. Some selling cheap (but expensive) souveniers, and lots of fish. The lake is full of fish and tends to be quite bountiful. And clear, so the fish likely taste quite good. We weren’t too keen on anything fishy today, though. 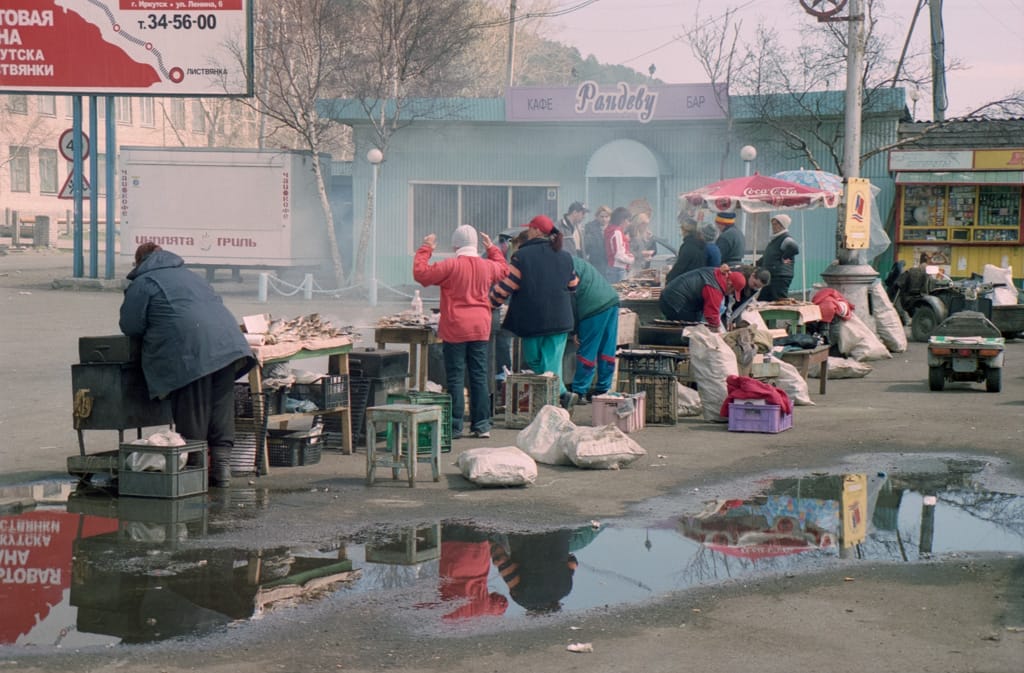 We returned to Irkutsk, stopping only a couple of times for a last look at the lake, and for a nice photo op we noticed on the way back. It was a six-hour excursion, and both Amy and I would highly recommend calling Leonid if you’re in the area and need an excellent guide.

Tomorrow, we head off for Ulan Ude. We’re nearly out of Russia and into Mongolia. Time is passing too slowly for me, though, as I want to get moving back towards home. As much as I love travelling, I really miss Alex.