Thursday, 12 May 2005
[This entry originally posted on How To Get Lost: Russian trains.]

I never really got an appreciation for the trains back in 1989, since we were let around by guides. Now that we don’t have the luxury of someone pointing things out, we’ve had to figure it out on our own. It’s not nearly as hard as it might sound, though.

First, the Russian train system has become quite efficient — even though they’ve got not even twice the amount of track that Canada has, and a lot more land mass to serve. Schedules are set up so there is buffer time, allowing the trains to meet their scheduled stops regardless of delays. They’re not high-speed, either — I think we’ve topped out at about 100 km/h. (There is a high-speed train, but I have no idea where it runs.)

The first train we took was the красный стреля (pronounced "kraznaya strelya" — Pavel, please correct me if I got this wrong), which is Russian for "Red Arrow". It’s Train #1 on the schedules, and runs direct from Moscow to St. Petersburg (and vice-versa, of course, since that’s how we took it) without stops. It’s as close to a luxury train as exists here. Since then, we’ve been on a commuter train (three-person bench seating), Train #28 (Moscow – Kazan), and Train #378 (Kazan – Ekaterinburg.

The quality of the trains goes down as the train numbers get larger.

Generally, trains are several cars long — the longest has been about 19 cars, with the average about 16 or so. There is one electric locomotive at the front that does all the work. I have no idea what the horsepower is on these things, but they do a pretty decent job of hauling.

The cars are all quite heavy, which leads to a decent ride. It’s helpful that the Russians have replaced tens of thousands of kilometres of track with CWR, which offers a pretty smooth ride. Much of the replacement looks fairly recent, being within the last few years. There are still lengthy stretches of jointed rail, giving the familiar "clickety-clack" as you roll down the line.

Each car is divided into about 10 compartments, each with four bunks. The compartments are roughly 5.5 feet wide, about 6.5 feet long, and 9 feet tall. The bunks are less than two feet wide — not a lot of room to move. One set faces forward, the other reverse. One bathroom (that we’ve seen), next to the prahdavista’s (attendant’s) cabin, has a toilet that dumps onto the tracks with a sink. There’s a samovar for hot water nearby. If you’re lucky, you can convince the attendant to lower windows to keep the temperature down in the cars. 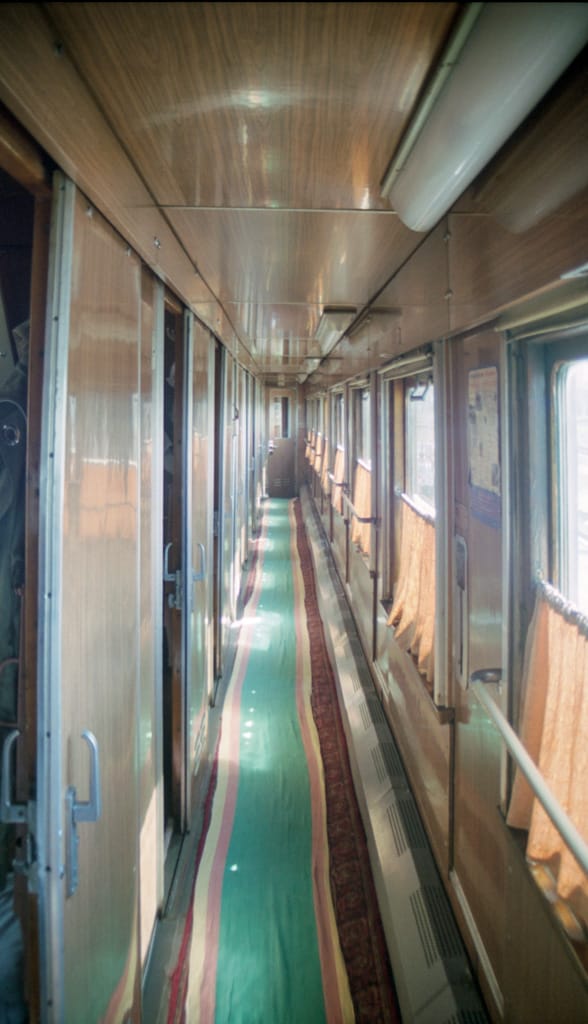 Bedrolls are rented when staying overnight for between 30 and 60 rubles, depending on phase of the moon (or some such unrelated factor). Sheets, thankfully, are delivered (upon paying the fee), clean and sealed in a plastic bag.

And for some goofy reason, all the trains run off of Moscow standard time, even though the stations are local time. I will never understand that one.