Friday, 06 May 2005
[This entry originally posted on How To Get Lost: St. Petersburg in the rain.]

It was a rainy day when my brother Raoul... no, wait, sorry — that’s a Pizzaville ad.

But it was a rainy day here (the rain only recently finally stopped). Amy and I were going to do the church tour today, but walking to the Peter and Paul Fortress would have soaked us through. Not really an option. Instead, we opted for the St. Isaac’s Cathedral, about a click down the road.

The last time I saw St. Isaac’s, it was still in need of work. It’s one of the largest and tallest buildings in St. Petersburg, and its golden dome was used by the Nazis for shelling the then Leningrad. The photos of the church’s history show that by the end of the war, St. Isaac’s was little more than a jagged shell of its former glory.

In 1989, bullet holes were still present in the outer walls and columns. Much of the interior had been somewhat repaired, but it was a far cry from complete. In 1997, a massive restoration project restored the church back to its pre-WWII beauty.

For 440 rubles, you can scamper up a tall, circular staircase to the colonnade to see the St. Petersburg skyline (it’s quite breathtaking from up there), visit the museum, and shoot non-professional photos (basically, you’re not using a tripod). It’s pricey, but it’s worth it. The interior of St. Isaac’s alone is worth it — I have no idea how much they spent on the work, but the results speak for themselves. 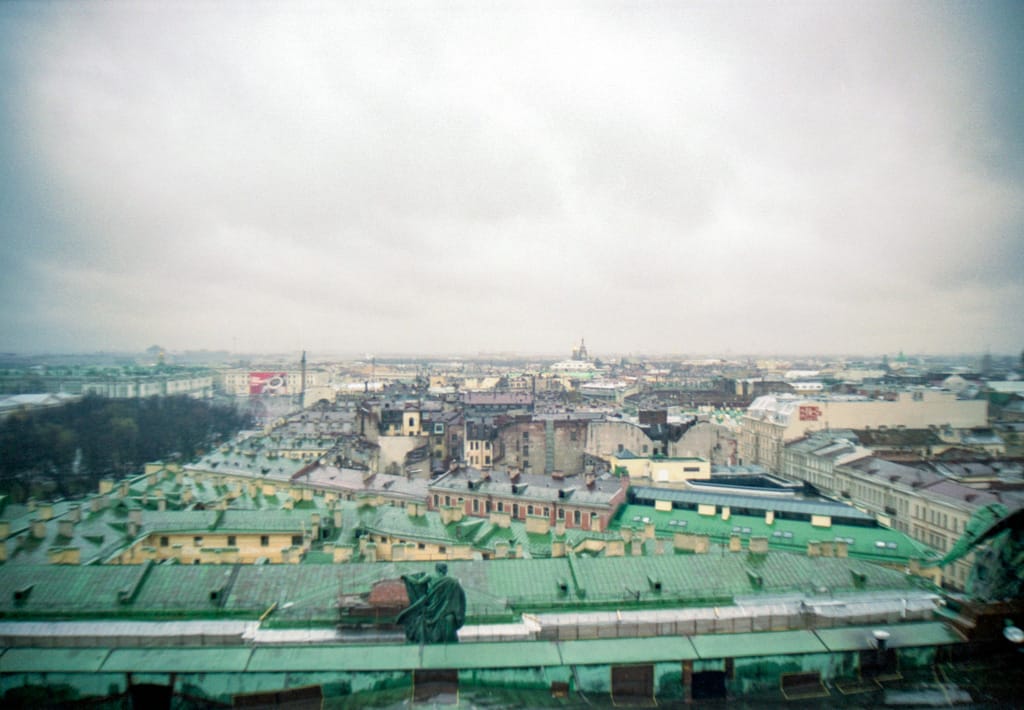 The interior is gorgeous. Allow me to show you a few things. First, the holy interior of St. Isaac’s Cathedral: 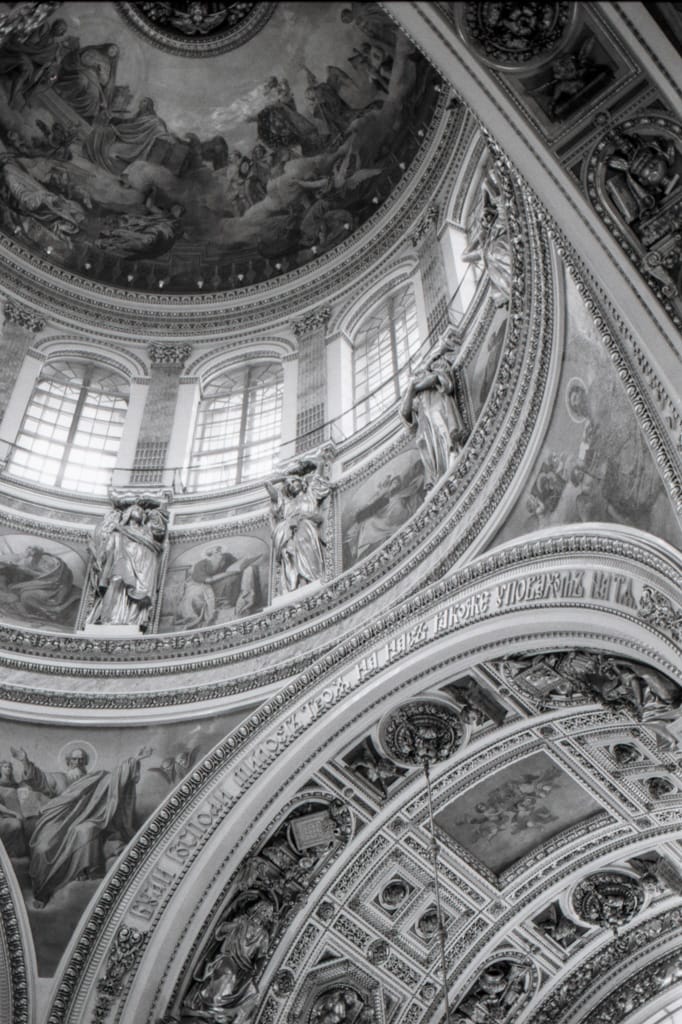 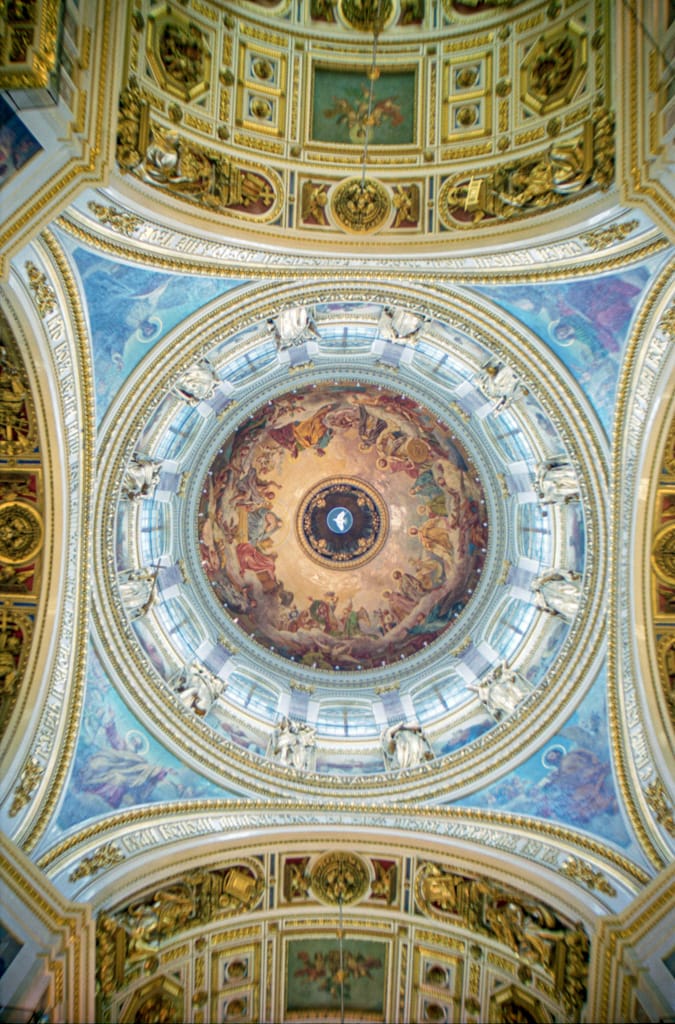 (Yeah, that was a little weird to see.)

Amy opted not to climb the colonnade, so finished with the museum (the rest of the church) by the time I got there. We met up afterwards in the Astoria Hotel for tea. Sheerly lethal sweets, I might add (the chocolate mousse was enough to make me cry). A little indulgence for such a wet day.

We returned to the hostel for a while before wandering back out to the Palace Square to see what was going on out there. The military have been practicing for a few days for the big celebrations on 9 May (60 years since the defeat of Nazi Germany). They were apparently pretty bad on Wednesday. Not too bad today, though I’m sure they didn’t appreciate being in the rain. 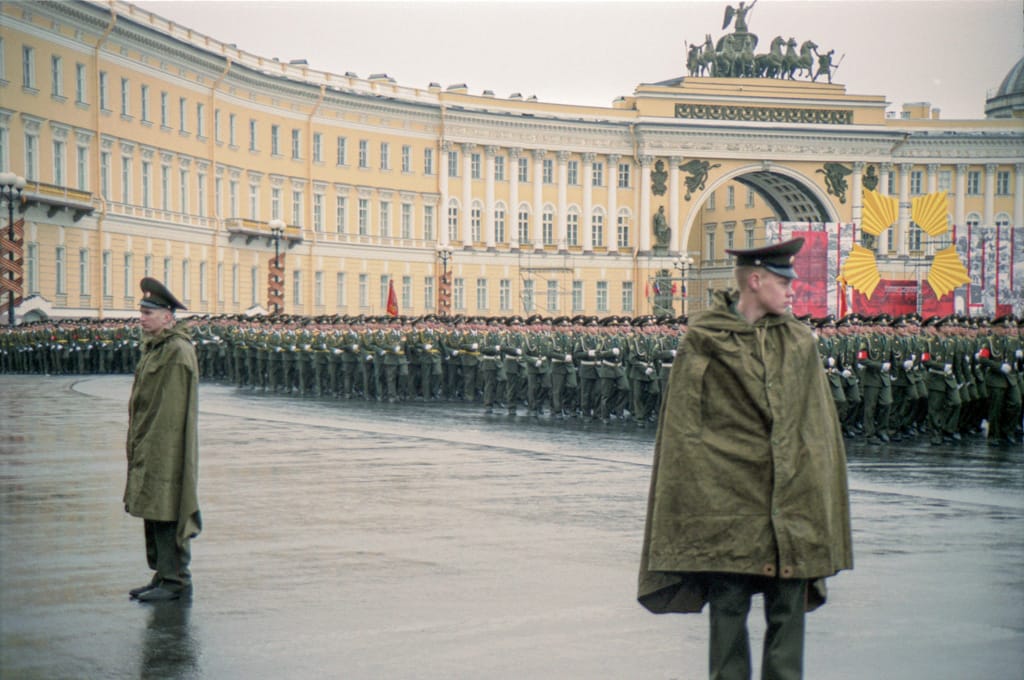 We’re getting ready for our train to Moscow tonight. We leave in about two hours. We can only hope we’re not trapped in a cabin with vodka-toting Russians. Our new Israeli roommate took all day to recover from his sojourn here yesterday as a result of that...