I slept horribly. I’m not sure if it was from the hiking we’d done yesterday, or the troubling thoughts running through my mind as a result of last night. I’d felt like Alex and I had been abandoned for breakfast, as well, with everyone but us having done up to Uncle David and Aunt Alaine’s suite for muffins, coffee, and juice. I suddenly felt like we’d been completely excluded. It left a very hollow feeling with me.

Alex and I headed up to the restaurant, which was where we’d agreed to go with everyone else for brunch. We sat there for a while, wondering where everyone was. The feeling that we were being shunned as a result of last night wasn’t going away. It wasn’t until they (Cathy, Craig, Mom, Brenda, Mike, and Nana — Jen slept in) appeared from Dave and Alaine’s suite that I started to feel a little more normal.

We gorged ourselves on breakfast. I started to feel better, and put off the negative thoughts as nothing more than paranoia. When brunch finally rolled to a close, Alex and I headed up to Dave and Alaine’s suite to bid a good morning, and farewell. I didn’t think we’d be seeing them before they headed back to Kelowna, so it was the best possible chance. (As it turns out, we saw them again that evening.) Pam and Sean were there, still wired from the events of yesterday, despite barely four hours of sleep. The large room (which contained a sitting area and small kitchen-like space) was littered with fruit and muffins, juice, and chocolate milk (for, guess who?).

Hanging around for a little while (and being joined by the others) to chat a bit, we then returned to our rooms to pack up. It took a bit of effort to get everyone put away (a few trips were needed for Mike and Brenda’s room alone). Once our stuff was away, we helped pack up the remainders from last night — plates and leftover liquor, wine, and beer. All of it went into Mike’s truck (borrowed for the purposes of transportation).

Packing complete, Alex and I departed to do some shopping. The only thing on our list? Jeans, for Alex. We hit several stores before tag-teaming almost the entire selection at The Bay (yes, believe it or not, there is a Bay in Banff). Jeans in hand, we stopped next at the Old Spaghetti Factory for a late lunch.

"Late" being the operative word. I didn’t realize what time it was until we left. We needed to be at Mike and Brenda’s house for 17:00 to help move a couch. We didn’t even depart Banff (Bamf!) until almost 15:45, having needed to take a sidetrip to take a photo of the Banff Springs from Surprise Corner. It was still snowing when we finally left the protection of the mountains. Calgary would be under a blanket of snow. 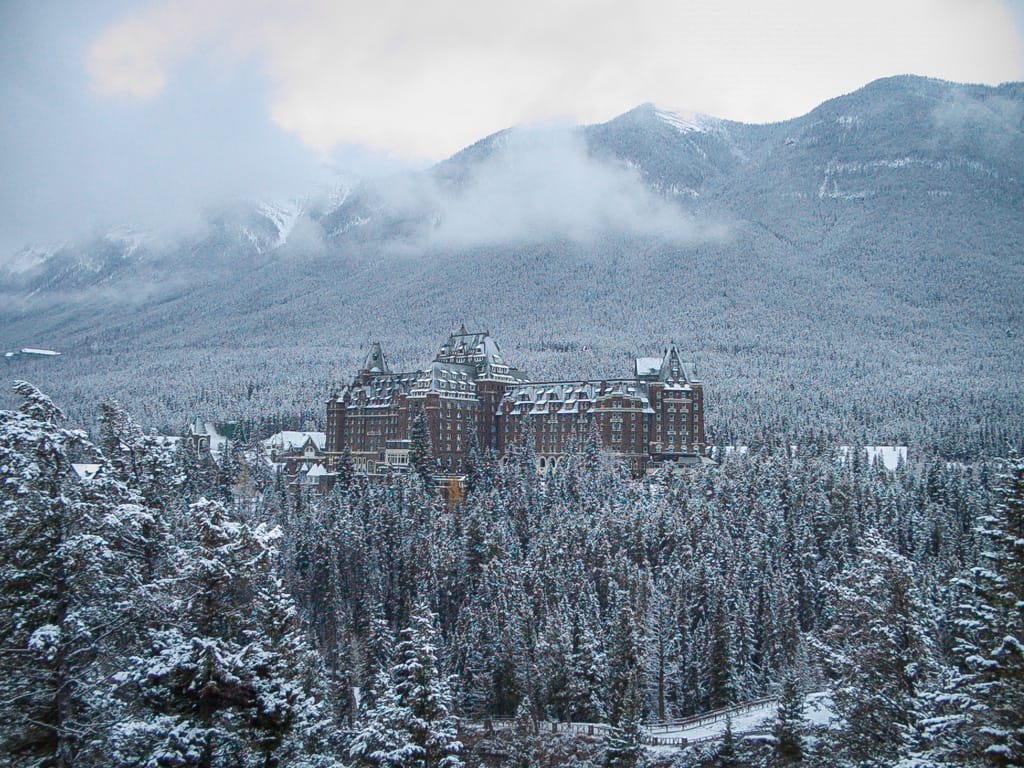 The couch had been moved by the time we got there. The group of us, joined soon after Alex and I arrived by Dave and Alaine, returning the truck, moved into the living room for pizza and a slideshow of the photos we’d taken. Craig, Mom, Mike, and I ran through our collective sets, describing them as needed.

It got to be late. I want to be up early tomorrow to hit the gym — I’ve got a weekend of overeating to work off. So we prepared to leave. That’s when I found out that Cathy and Craig are staying at a hotel tonight. I felt a little cheated, having found out at that point. I understood their reason (without having to ask), but suddenly felt like they were avoiding me. Yeah, there’s that paranoia again.

No biggie, though. I’ll see them tomorrow for lunch. Assuming, of course, that all hell doesn’t break loose.