A couple of weeks ago, we received a note in our inboxes that Thelton McMillan, the President and Chief Operating Officer (COO) had left Critical Mass. Needless to say, this had come as a bit of a shock to the staff, who had not expected something like this to happen.

The reasons for the departure were a bit nebulous, since we weren’t entirely sure what was truth and what was made up to soften the blow. The official story was that Thelton had done what he was hired to do (restructure Critical Mass into a professionally-managed organization; we were previously more fly by the seat of our pants), and had run out of challenges. Not able to extend himself further, he felt it was time to move on.

To a large extend, Thelton will be missed. Good leadership is hard to find, and that he was, despite his initial introduction to Critical Mass.

When I returned to Critical Mass after my stint with the CBC TV 50th Anniversary VIA Rail train, Thelton had come on to replace Di during her maternity leave. The Friday of that week, I got my first formal introduction ... when he went on a massive rant about Critical Mass’s value system, respect, and responsibilities.

He almost instigated a mass exodus. In the span of a few minutes, Thelton pretty much managed to piss of the department with the worst morale in the company. He never apologized for what he said, nor should he have. There was a new wind blowing at Critical Mass, and we were just figuring out what it was.

Over the course of a few months, Thelton turned that relationship around. It took a lot of trust (and to be sure, there were those who never did fully trust him), but the results that came around as a result of his initiatives were undeniable. Politics within the departments aside, the transition went pretty well. (As some of you know, I had pretty major issues with how the transition went within Technology.)

So tonight, many of us came out to bid Thelton a proper farewell. (Especially those of us who have benefitted greatly at his generousity when buying rounds of drinks at various Critical Mass events.)

Departing from Critical Mass shortly after 17:00, Scott and I drove down to 15th Ave. and 5th St. SW, about a block from Bungalow (the lounge formally known as Pongo, since redesigned and reopened), which was our destination. There, we found John, one of our DBAs, trying to find the bar.

Only a handful of people had arrived. The group had doubled 20 minutes later, and double again 20 minutes after that. Thelton and Christy arrived about 15 minutes after we did. Scott had to leave about 18:00; I had to leave before 18:30. It could have easily ended up being a major bender (had I not had existing plans, no doubt I would have hung around to the bitter end). Instead, I had a chat with Thelton and Garth, getting a feel for Thelton’s plans. 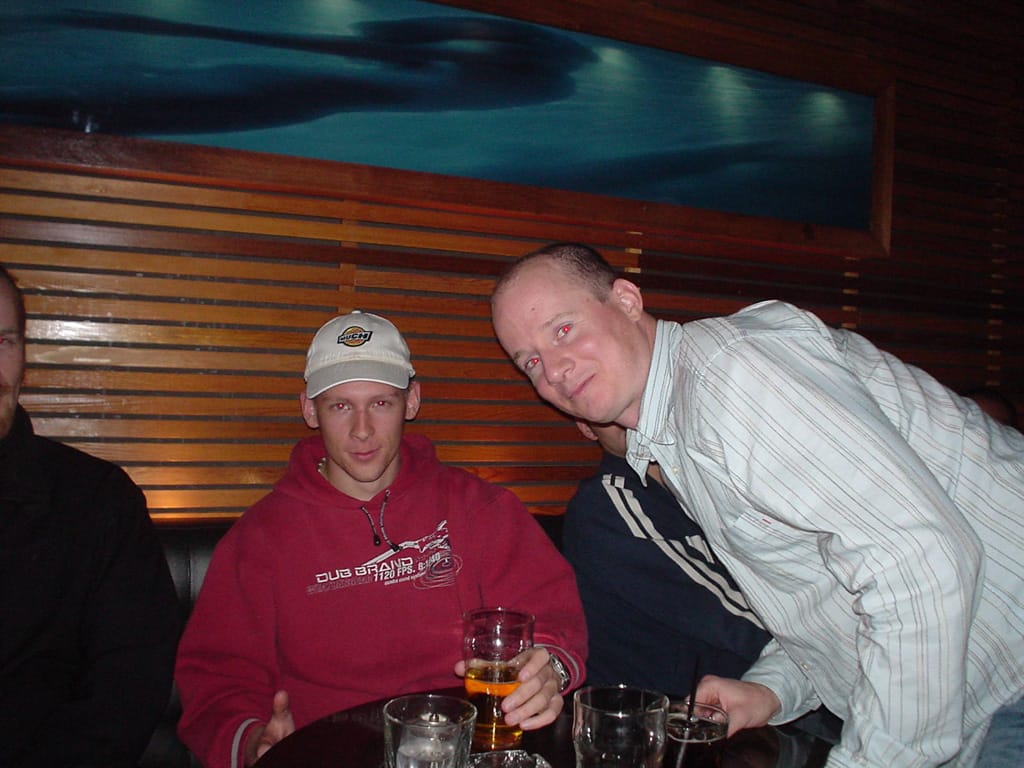 I bid adieu to Thelton as I headed out to my car. I don’t know when our paths will cross again. I only hope that they will.

Picking up Alex from home, we headed out to Banff (Bamf!). The entire Tisdale clan (extended or otherwise) along with friends were gathering. Tomorrow is Pam’s wedding.

The drive out was filled with conversation, but after a long day, I was happy to get there and get ourselves squared away. Too bad that ended up being more difficult than it should have been.

It appears the staff at the Banff Park Lodge are a little on the dense side. Aunt Brenda had booked four rooms: one for Brenda, Mike, and Jen; one for Cathy and Craig; one for Mom and Nana; and one for Alex and myself. We were the last to arrive, but there were no rooms left under Brenda’s name. Two were gone, and the remaining two had been switched to Cathy and Mom.

I piled back into the car to run out and find Cathy and Craig at the St. James Gate, an Irish pub about two blocks away, where everyone was meeting starting at 20:00. We had passed C&C on the way over, so I knew they’d be there.

Alex’s introduction to C&C was on the sidewalk outside the pub in the cold weather. Not exactly an ideal situation, but you can’t always control everything. Cathy was certain that we were in room 105.

The four of us returned to the hotel, Cathy going to retrieve Aunt Brenda. As the story boiled out, Uncle Mike (who had arrived earlier) checked in at the front desk, and was assigned to #105, despite his wife being in #104. He’d even dumped his things in the room.

Keys in hand, bags in room, car parked underground, and introductions more or less complete, Cathy, Craig, Alex, Mom, Brenda, and I all headed over to the pub. The room in the back was already fairly full, but we managed to squish into a table. 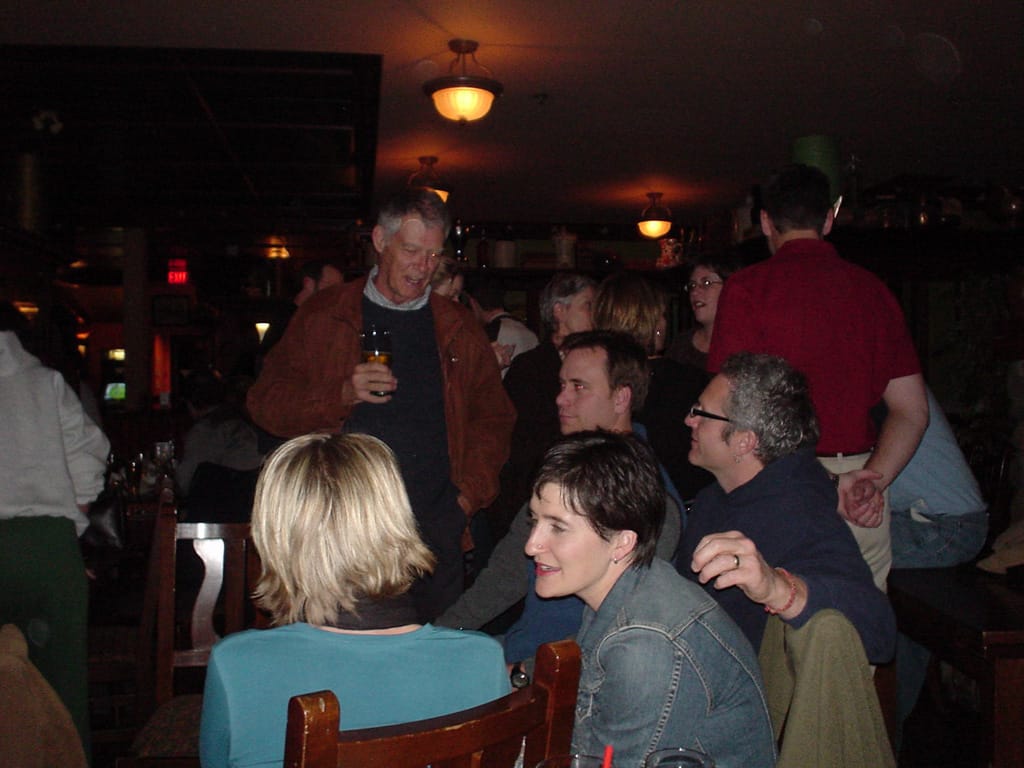 We had a couple of drinks, chatted a while (Mom and Brenda left after about a half an hour), until just after 22:00, when Alex and I decided to head off in the direction of the Hot Springs. (There was another minor reason that was the initiator, but it’s not particularly relevant.) Jen came with us. It was raining a bit as we drove up, chatting with one another. I dropped Jen and Alex off at the building and went to park the car. They were waiting for me when we arrived. Despite Jen being a couple inches taller than me, she still qualifies as a child.

I was the first out of the change room. The pool was empty. For a moment, I thought it might be closed. But it turns out, on what seems to be an uber-rare event, there was no-one else in the pool. The springs didn’t close until 23:00, and it being only about 22:25 or so, the pool was all mine.

Well, for about two minutes, which is when Alex joined me, followed a couple minutes later by Jen. For about 10 minutes, the pool was all ours. We were then joined by a pair of women, who stayed primarily at the cooler end of the pool. We went from the hotter section to laying in the "children’s" area and back. I finally bailed about 23:50, when nausea began to set in. Top sign you’ve been in too long...

The evening was much more comfortable with the benefits that come from relaxing in that pool. I almost wish I lived in Banff so I could buy and annual pass, and go to the pool whenever I liked. Such as it is, I can’t.

Maybe this means I need a hottub...