If I had a list of top ten bands that would never play Calgary, KMFDM would have been on list.

But more on that in a minute or two.

Today began fairly normally for a Sunday: Alex and I rose, ate, showered, and prepared for the various tasks of the day. Then we went to church.

Yes, church. Specifically, the Knox Presbyterian just off 33rd Avenue. Naturally, you’re asking why we went. I mean, this is me after all. Church-going isn’t exactly my thing. In fact, until today, the only reasons I’d been to a church, aside from tourism, was for weddings, funerals, and one Easter mass when I was a kid. Aside from that, I’m more likely to sleep in on a Sunday morning.

We went for two reasons. First, it was Thanksgiving, which (admittedly), was more of excuse to go than a reason. Alex wanted to go, having not been for quite some time. This was her first chance to bring me. It’s signficant because this church was where Alex’s father used to be a minister from 1978 to 1988. Many of the congregation still know Alex, even though she hasn’t really been there very much.

The church is a modern design, due to a fire that destroyed the previous building when Alex was a child. The new one is an average size, holding about 250 parishoners (a bit of a guess). The main hall is contained in a 70 to 90 degree arc, with the altar, choir space, and organ at the apex. The outer curve opens into the atrium through two doors (there is no central aisle, which Alex thought was a poor design — no central way to walk down the aisle for weddings).

The new minister, a man named Murdo, is quite a pleasant person. I met him just before going in for the service, having spotted Alex and I in the Nantex (the atrium space). He wore white robes with a brightly coloured stoal, representing the Christian Creation myth.

The service was nothing particularly fancy, going fairly quickly (about an hour). There were four hymns (none of which I sang, as I can’t remember how to read music; and my voice is listed as a weapon of mass destruction), a couple of passages from the Bible, a few songs from the band (which many of the longer standing congregation seem to barely tolerate through gritted teeth), and a simple skit that Rev. Murdo guided many of the younger people through.

The parable was one about how 10 lepers (or to be more PC, people afflicted with a skin disease) asked Jesus for mercy, which was how they begged in the time. Jesus instead told them to go see the priests (which, in lieu of doctors, declared whether or not someone was fit to rejoin society). All were cured, but only one — a Samaritan — returned to Jesus to give thanks.

That was the Reverend’s point — that we don’t really give thanks enough. Some of us certainly not to each other, but most of us not to Jesus and God. (This is why, of course, that many say Grace at dinner.) This brought a group confessional asking for forgiveness for not giving thanks.

The formality of such a thing was a little awkward. Such are the joys of being an Christian agnostic. I suppose it would have been much worse had I been in a Roman Catholic mass.

The service over, we stuck around for a bit so Alex could talk to some of the people she knows (and to listen to an upcoming child prodigy, who could play one of Mozart’s more complicated piano pieces having only played a couple of months; Alex loves Mozart). Having met up with just about everyone we needed to, we headed off in search of lunch.

So am I going to make a regular habit of attending services? Not likely. I’ve never been much for organized religion. I’m more of a tourist.

We didn’t end up eating until we got back to Alex’s condo, but we did stop at Wal-mart to pick up yarn and a couple of patterns. (Yes, Alex has taught me to knit. Now I just need practice.)

Being Thanksgiving, we were invited to Mike and Brenda’s for dinner. We came armed with dessert — a four-layer pumpkin cake that Alex and I had made the night before. (Well, Alex made most of it, I contributed by cutting the cake layers and toasting the pecans.)

Dinner was the usual turkey (not that I would ever complain about having turkey), mashed potatoes, creamed onions (a Tisdale favourite), stuffing (of course), and steamed vegetables. Under a small ocean of gravy, naturally.

The cake pretty much all went down, save for one piece. (Nine people, ten slices.) Alex and I declared that the recipe is a success, but needs modification.

We left not long after 20:00, mostly due to Alex’s allergies (Maggie and Alex don’t really get along, and Alex forgot her inhaler). This worked out well for me, since I had a concert to attend.

Yes, you knew I was getting to this eventually.

Dropping Alex off at her place, I stopped off at home only long enough to change (crappier pants and a black t-shirt) before heading over to the warehouse. It was about eight degrees, which I felt warm enough to go without a jacket. (Mind you, I drove to the adjacent block, rather than walk the whole way.)

The line was ... interesting. There were two lines, one which seemed to have a lot of goths (wannabe and actual), and the line filled with fans old and new. It was interesting, since I was half-expecting to be one of an extremely small number of "preppily" dressed folk. But it seemed I wasn’t alone, and several others, much more snappily-attired.

I should probably describe why I was wondering about attire. KMFDM is not a mainstream band. They’re a little more fringe (though not too far from mainstream), which naturally means that those who dwell more on the fringe are likely to come out. Hence, more leather, dark clothing, large boots, piercings of all varieties (and visibilities), and various states of mental abilities (some, sadly, lacking much more than others).

It took nearly 45 minutes to get in the door. The staff at the Warehouse are notoriously slow. Tamara, Todd, and Andrea arrived at 19:30 to avoid the line. When I finally got in, it only took about five minutes to find them. The Warehouse is small — only about 100 feet by 30 feet — so there’s not a lot of room to hide in.

That space filled to the point of illegality. If the Calgary Fire Department had shown up, no doubt they would have shut everthing down for having violated the maximum allowable number of people.

The opening act for KMFDM was DJ Acucrack, a duo from Chicago. Two guys, two Apple PowerBooks, and a mess of samples. The bass was enough to vibrate the hair on my arms. The treble was nigh-deafening (I knew almost immediately that I had made a fatal mistake not having brought ear plugs). But the beat was excellent. They played three sets (or songs, if you like) over the course of about 45 minutes to an hour.

We had about another 45 minute wait until KMFDM came on. Which was a blessing, since the sounds coming out of the speaker system during the wait were slightly more than irritating. Almost as irritating as the idiots who felt it necessary to force their way through the crowd without asking for people to move a little. They knocked Tamara almost completely over once.

KMFDM entered the stage without any fanfare or lead-in. There were five: two guitarists (who played pretty much the same chords for the hour and a half set), a drummer (with about 18 cymbals), Sascha Konietzko (the lead singer; En Esch doesn’t seem to be with the band anymore), and Lucia Cifarelli (backing and quasi-lead singer). They began almost immediately into a tune I didn’t know.

Officially, KMFDM seems to stand for "Kein Mitleid für die Mehrheit", which translates to "no pity for the majority". (Due to the fact that they’re German, there has been confusion in the past about what KMFDM actually means, leading to a rumour that it stands for "Kill MotherFucking Depeche Mode".) Their lyrics typically discuss the rejection of and resistance against incompetent rule in capitalist society, and are often laced with self-deprecation (one of their songs, "Sucks", features the lyrics: "Our music is sampled / Totally fake / It’s made by machines / ‘cuz they don’t make mistakes").

They didn’t engage in banter with the audience, pausing only to take quick drinks of water before diving into the next song. Of the entire set, I only recognized a few songs: "A Drug Against War" and "Light". Otherwise, most of it was newer than when I’d last listened to KMFDM. They were good, but after 90 minutes, my hearing was shot (I’m officially too old to go to these sorts of concerts in tiny venues without earplugs), and was happy to leave. It was worth my time, and is now something I won’t feel the need to relive again. 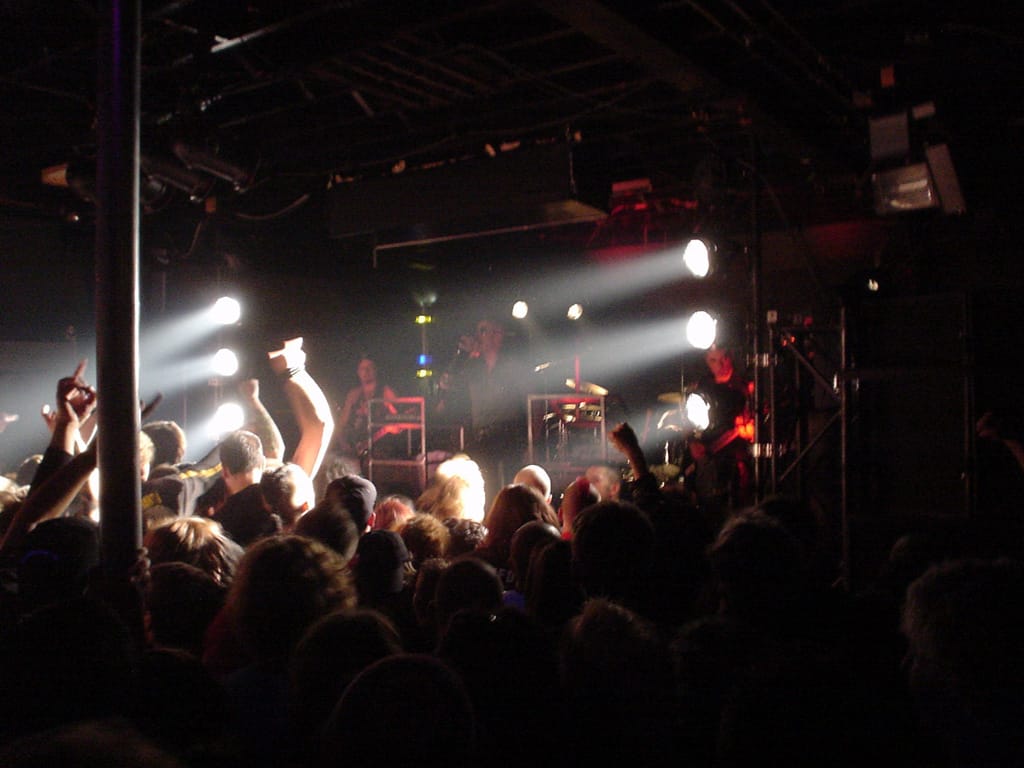 Quite a spectrum for a single day, eh?