WARNING! The following entry contains language that might not be appropriate to some. If you are offended easily by some words, I recommend skipping this entry. If you continue to read it, and are offended, your damn funeral!

I’ve listened to George Carlin since I was a beginning teenager. Back then, he was the funniest thing I’d ever heard. Guess what? He still is.

Tonight, George Carlin came to Calgary, and played the Jack Singer Hall. He certainly has a way of attracting a large crowd. There were exceedingly few empty seats, which just shows his drawing power. 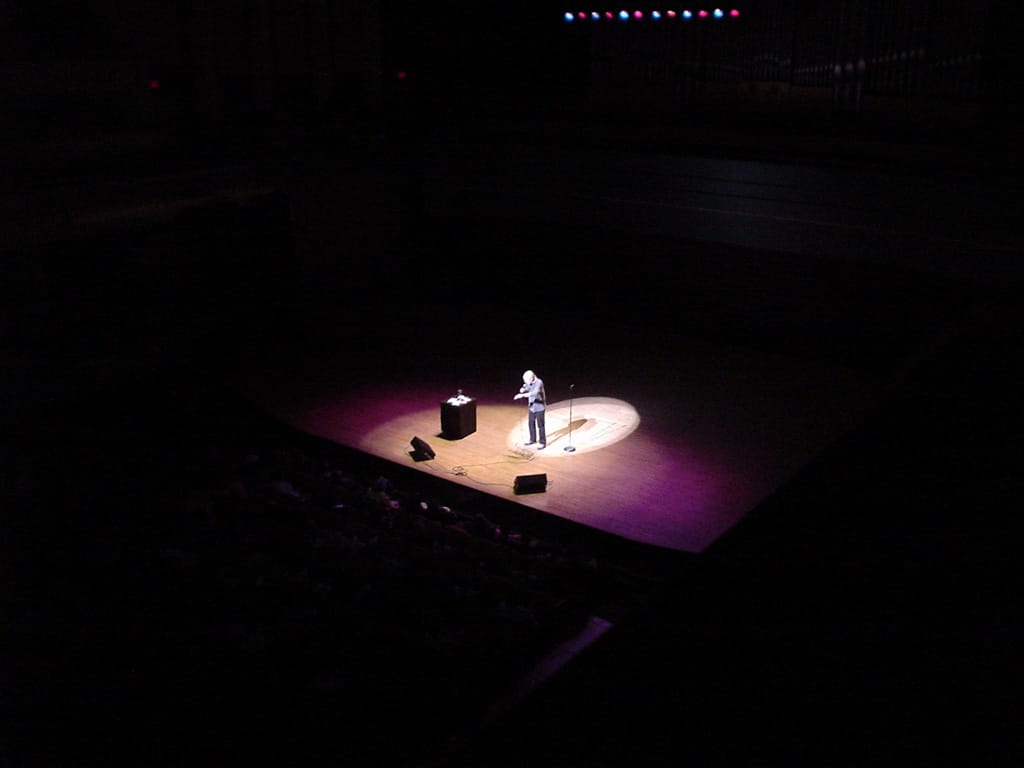 George started out in comedy in the 1950s as a clean cut, well-dressed comedian. He had a show that played well, and was attended by the well to-do of the time. After a while, however, that didn’t really sit with him. It wasn’t his thing. He was playing to his parents, not his generation.

This is how he came up with the Seven Words You Can’t Say On Television: shit, piss, cunt, cocksucker, motherfucker, and tits.

This is what sent George down a significantly different road than most comics at the time. In some ways, he could be thought of as an original "bad guy" of comedy. He forever stepped away from the good side, and made sure that the boat would never stop rocking.

George is an observationalist. That’s what makes him so funny. He doesn’t invent stories, he doesn’t create one-liners. He tells you the things you already know, but maybe just haven’t thought of it that way before.

Take enemas, for example. Not the most pleasant of topics, are they? Well, consider this: you know what they are, you might even know someone who’s had one. But someone, probably a guy (according to Carlin), thought of it first. Imagine that moment.

George started off his session with a rapid-fire monologue of what he is. I can’t even begin to describe it, let alone repeat it, and do it any remote point of justice. It was, however, amazing.

He then commented on how he was preparing for his 13th HBO special, and had a few things that he needed to rearrange to make the show be zippy. It was almost like hearing your grandfather (Carlin is 67, by the way) natter away about something very trivial. I was worried. I was thinking that this might end up being a really lousy show...

"You know what people don’t talk about in public anymore? Pussy farts!"

George Carlin had officially entered the room. So began about a 90 minute barrage of swearing, unusual musings, several slanders against every race, sex, creed, religion, and belief (because, like I said, George loves rocking that boat), with barely a pause. He didn’t waste time, and despite a couple of low points, he got a lot of laughs.

There were no encores, no curtain calls. He’s a simple guy who loves to turn the world on its ear for 90 minutes at a time. And that’s why people love to listen to George Carlin rant. Before there was Dennis Leary, before Eddie Murphy, before Father Guido Sarducci, there was Carlin.

So to you George, thank you. Thank you for coming to Calgary and bringing us a live rendition of your views for us to hear. Thank you for being so blunt about the way things are, good or bad.

And of course, thank you for fucking me up 20 years ago.