There’s something about driving like a maniac that makes for an interesting afternoon.

I’ve been working on the Mercedes-Benz USA account for over four years now. In all that time, the closest I’ve ever come to a Benz are the ones I see driving down the street, or the ones we caught in the 2004 Calgary Auto Show.

That is, until today.

Exactly how this was worked out, I’m not sure, and I’m not one to pry. All I know is that it was not only well worth my time, but it was a heap of fun. Through an announcement we received from Thelton (likely arranged through Dan, who was on vacation until today), we found that Critical Mass had arranged to attend one of Mercedes-Benz Canada’s Ride and Drive events. This would give us first-hand exposure to the products we market.

First, though, we had to go through a product seminar. Or at least that’s what we were told it would be. As it turned out, the presentation had become an episode of "Jeopardy". The team was broken into five teams, each with a speaker. The speaker was to answer the question (or question the answer, in this particular case).

In some cases, the questions were correct, and points awarded. In my team’s case, represented by Jason, they were not. Christine was kind enough to tally our final score at about -$10,000.

Immediately following the "seminar", we headed to our own personal vehicles (or other’s if we were getting a lift, which I was), and headed towards the southeast to Race City Speedway.

The event was to start at 14:00, at least according to the website. It was already underway when we arrived around 13:30, although you wouldn’t necessarily know — there weren’t a lot of people there.

Race City Speedway is on the bare outskirts of Calgary. It’s been there for decades, and it shows. It’s not the most glamourous place: the main parking lot is ratty gravel, the dirt oval looks like it hadn’t seen a spot of paint in at least 10 years, the timing tower’s seen a couple of improvements probably in recent times, though iffy, and the bleachers ... well, you won’t catch me sitting on them any time soon.

That said, the Speedway has a quarter-mile track for drag racing, and a small course for road racing. It was where the quarter mile track starts that Mercedes had set up the entry tent. There we received our tags, denoting us as participants in the event. Exiting the tent, we found the collected inventories of the Hyatt and Lonestar Mercedes-Benz dealerships neatly lined up for viewing. (One of the salesmen would later tell me that Murphy arranged to have their dealerships swamped with customers on the two days the cars weren’t there).

We were ferried down from the cars to the first of the three event pieces. We were either driven in an ML350 or an S500. I opted for the S500, since I have no interest in the M-Class. The S-Class is a nice line, though I know I have no hope of ever affording one.

The Ride and Drive event is put on by Mercedes-Benz Canada as a sales gimmick. The idea is to go beyond the ordinary test drive, to get a chance to push the car to do the things you wouldn’t get a chance to do in a normal test drive. The event is actually run by a completely different company, though. 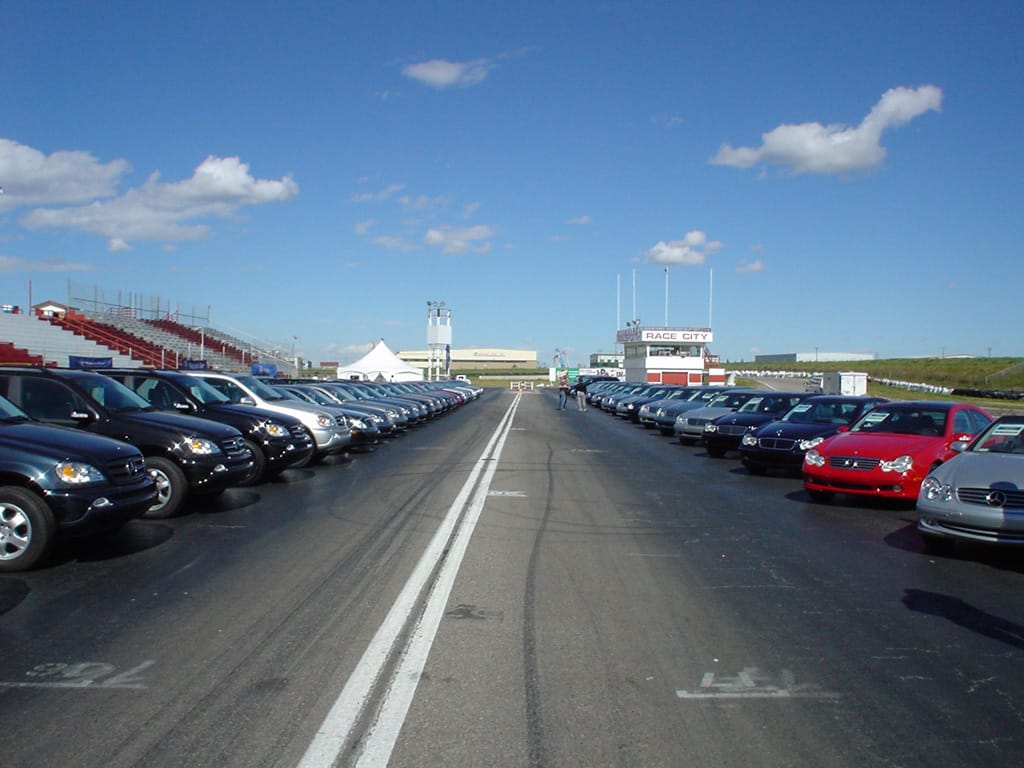 There are three activities at the Ride and Drive: the slalom, the C55 challenge, and braking and handling. This was the order I did them in, too, though I initially had no peticular desire to go near the C55. Details on that in a moment...

The slalom is a fairly simple thing. The course is a loop, about 250 metres long, and about 15 metres wide. You drive down one side, at a fairly brisk pace, getting to know what the car is like in sharp corners. The course then turns around to return the way you came, with a jog to the left, then back to the right, and a stop sign just before the start/finish line.

Jen, our Product Specialist (she ran the "Jeopardy" game), and I piled into a C230 Kompressor for the slalom. Jen took the first run, whipping in and out of the pylons that marked the edges of the curves, before whipping around the end, and bursting to the stop sign. We reached the end quite quickly, and we swapped. I don’t know how fast Jen did the course, but I think I ran it at about 50 km/h. I only hit one pylon. Others in our team were not quite so lucky, both Mabel and Jeff got lectures from the officials about their driving.

I have to say that I have changed my opinion of the C230 Kompressor. I built the microsite for the Mercedes-Benz USA launch a few years ago. I came to loathe and despise the vehicle. I didn’t want anything to do with it. I actually tried to avoid driving it, opting for the C230 Sport Sedan instead. But somehow, it worked out that I got a chance to experience a car that, until today, I hated. Funny how things happen. 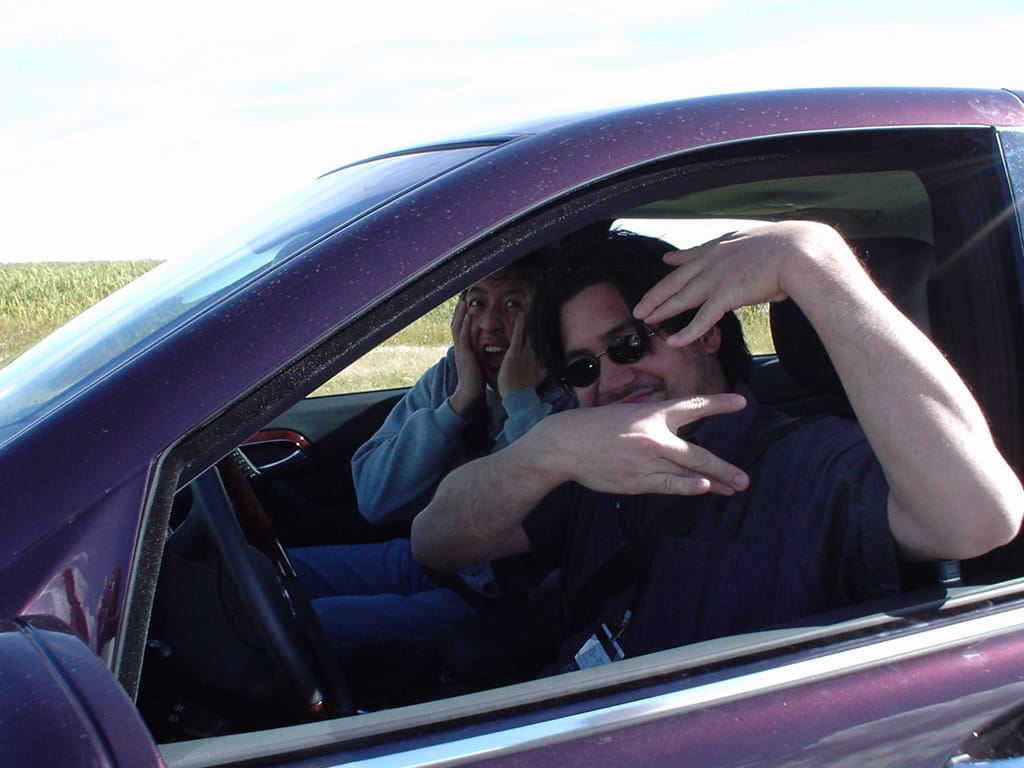 As we watched others running the course, Robb finished his run in the C55, proclaiming:

"You guys have gotta try this!"

The C55 activity wasn’t really "active". The C55 is the top of the line in the C-Class line, running about CDN$75,000 base. It’s an AMG, which is Mercedes-Benz’s custom sport line. It’s powerful, about 360 horsepower. It’s not the sort of thing that Mercedes-Benz is going to willingly let us drive. So they brought in a professional race car driver.

Jen, Marcie, and I donned crash helmets and piled into the C55, Marcie in the front passenger seat, myself behind Marcie, and Jen next to me. The driver smirked through his visor, and the car took off, probably due to the massive ACME rockets strapped to the sides. (Well, okay, it felt like it.)

The course isn’t long, maybe a kilometre in total length. Of course, pulling corners at 160 kilometres an hour eats up track very quickly. The locks on the seatbelts kicked in almost immediately, and stayed engaged until we got to the end.

The next activity, just down the way from the C55 was hands-on: braking and handling. The task is fairly simple: drive as fast as possible towards a tight, short s-curve to the right, taking the turn while braking. Then come around for a straight-away run back in the direction we came in, running at full speed towards a stop sign, braking to the point where the ABS has to kick in. The idea, of course, is to find out what the cars handle like under the conditions.

We had the choice of a C230 Sports Sedan, the S600, an ML350, and an E500. When I found out that the C230 had a manual transmission, I couldn’t resist the chance to give it a whirl. Scott (from our Research and Analytics group) hopped in the passenger seat.

The return run was almost too much fun. Having (more or less) figured out the clutch’s sweet spot, I accelerated to over 120 km/h before I got to the stop. I popped the gear to neutral, and tried to put the brake through the floorboard. Nary a squeal from the tires, and the car came to a very quick halt.

I would do the run again in an E500, but only as a passenger. It was a noticeable difference, mostly in that the E500 doesn’t handle as well. It is a bigger engine, but it’s also a bigger car.

The smell of burning rubber was everywhere. If it wasn’t us smoking the tires on the slalom course (we regularly did ... though I don’t believe I did), it was us squealing on the braking and handling course. Naturally, the C55 did have a bit of residual afterburn from the hard driving.

We even managed to set off the brake overheat alarm on the E500.

I have to say, I was duly impressed by the Mercedes-Benz lineup that we got to try. I somehow doubt that I’ll ever own one, mostly because I simply don’t get paid enough for one. (Besides, I do like my Mini.) What did I get out of all this today, then? A better appreciation for them, which is something you simply can’t get looking at pictures.

Afterwards, we all headed over to one of the local pubs (Duck and Firkin, Fox and Gherkin, Bob and Merklin ... something like that) for a few rounds. It gave us all a chance to recount our specific tales of automotive achievement, and ridicule each other about the dumb things we did. 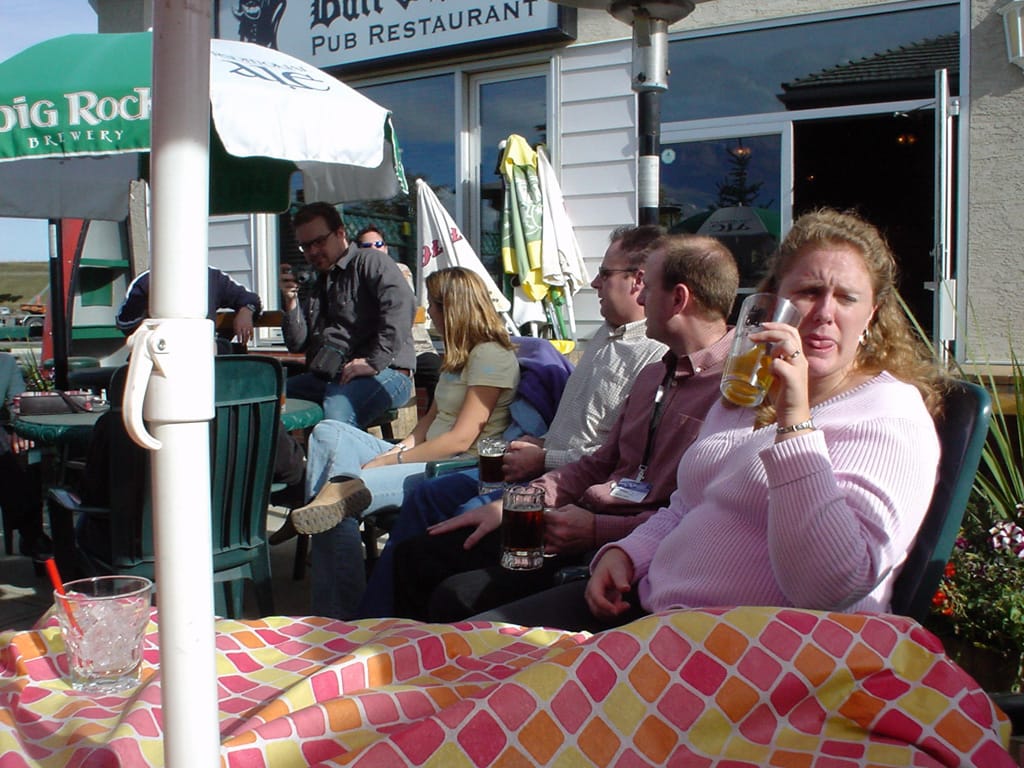 ‘Cuz hey, if you can’t mock your co-workers, what other reason do you have for working?