A busy weekend this most certainly was. But it was a fun, productive one.

The first major thing was on Saturday. Mom’s in town to help out with Nana’s recovery from surgery (she had her knee replaced at the beginning of the month), so it was only fitting that Mom and Alex finally meet. Unlike my introduction to Alex’s dad and stepmom, Alex knew about this long in advance, and I prepared her for it. Not that there’s much to prepare for ... Mom isn’t an intimidating person.

Cathy and Craig, on the other hand, that’s going to be an interesting introduction.

The meeting was over lunch, at the Cactus Club Cafe up on Barlow Trail. I hadn’t been to a Cactus Club since I lived in Vancouver — so at least four and a half years ago, bordering probably on five. It seems that they’ve gone a little more upscale than I remembered, coming somewhere in between an upscale casual restaurant and a low-key nightclub. At lunch, it wasn’t loud or obnoxious, so it was at least pleasant. The decor was pretty chic, too.

Mom had actually dressed for the part, as did Alex. I wore just whatever I felt like — woefully underdressed again. Mom and I spent most of our time catching up on things. I found out that Cathy and Craig have mostly finished their kitchen, and completed the new bathroom. (Cathy — care to update me every now and then?) A couple of deaths and a few new shake-ups. Overall, the usual.

Alex and Mom didn’t talk too much. This was not even remotely surprising. Mom’s not the in-your-face inquisitive type (that’s Cathy), and Alex is a little shy. Fortunately, Mom knows a bit about Alex through me; Alex knows a bit of Mom through me. One day, I won’t have to be the middle man.

Following lunch, I got down to a bit of work, most of which was getting my journals posted from my vacation in BC with Alex. I’ve got some actual work to do, which I hope to get off my chest before I go to bed tonight. (Alex went to lie down, victim of a nasty headache.)

Tamara’s birthday is today (happy birthday, Tamara!), and last night was her birthday party, held at Booker’s Crab Shack. We’ve been there a couple of times, and it’s a great place for Louisiana-style food. Alex was to come, but her head just didn’t let her up. I stopped by briefly before joining Tamara, Dan, and Doug at Bookers. We were later joined by Todd, Andrea, and Cailey. Dinner was a nice fillet of tuna, for me, anyway.

I returned to Alex’s after dinner, an Orange Crush Froster (Mac’s version of the Slurpee) in hand. I thought the coolness might help her head a bit. As it stands, she was already feeling better when I arrived, so it became a bit of a bonus. We watched "True Lies" on Access before going to bed.

We tried not to sleep in this morning, as the big event of the day was going out to Canmore. Today was the Calgary Philharmonic Orchestra’s production of "Mozart on the Mountain". It’s a show that features Mozart, held on one of the greens of the Stewart Creek golf course, in the shadow of the Three Sisters. In theory, outdoor concerts shouldn’t get any better.

To be certain, I’d have my doubts that it could get worse.

First off, I have to say this much: the concert was excellent. The music was wonderful, the soloists (Nikki Einfeld, soprano; and Paul Grindlay, bass) were excellent (although showtunes from plays and movies don’t sound as good when sung by opera-trained singers). The weather was even decent (although it did get cooler as the day wore on), despite the garbage we’ve been having all summer (if you can in fact call it "summer"). I was a bit surprised at the lack of Mozart (we had only selections from "The Magic Flute" and Symphony #41), though they renditions of "Colonel Bogey March" and "Blue Danube Waltz" made up for it, in my ears, anyway. The volunteers were also quite nice, those we dealt with anyway.

Now, here’s where my bitching starts. Just getting tickets was an ordeal. Alex has a huge gripe with this, having wasted over an hour trying to purchase them, and then spending two hours trying to (unsucessfully) pick them up. She even wandered into the Calgary Philharmonic Orchestra’s offices without a single person actually being there. What’s up with that?

That’s annoying. What was really frustrating was the organization (or complete lack thereof) at the event site. We were not permitted to drive to the Stewart Creek Golf Course. Why not? Try finding parking for 7,500 patrons in the area. We ended up having to park in fields and empty lots around Canmore, and were bussed to the site. That, at least, was intelligent. The busses came onto the grounds, went into a bus loop (newly-constructed for the event, and didn’t look big enough), and empty people out to walk up to the green, a distance of about 400-500 metres.

We had to walk through a tent that contained sponsors, vendors, food, and the CPO’s merchandise store. The ground was soggy from all the rain. We walked on bark mulch, which wasn’t much better. It took a while before we got to the asphalt trail used for the golf carts. It wasn’t a hard walk, but it was a slow one — the trails are narrow, and people weren’t walking fast.

Finding a seat wasn’t too hard, but we were quite a ways back. (The concert didn’t start until 14:00. We arrived at about 12:45. People were apparently lined up for the busses at 8:00 that morning.) The tricky part was finding seating where we weren’t surrounded by chairs. This annoyed the both of us.

According to the sheets we were given, the ONLY kind of seating that was supposed to be allowed were "festival chairs" — folding chairs with legs less than half the length. This is so people without chairs can still see over and around you. I can count on my fingers and toes the number of actual festival chairs I saw. The rest were the full-sized chairs. There was absolutely no control on them whatsoever. 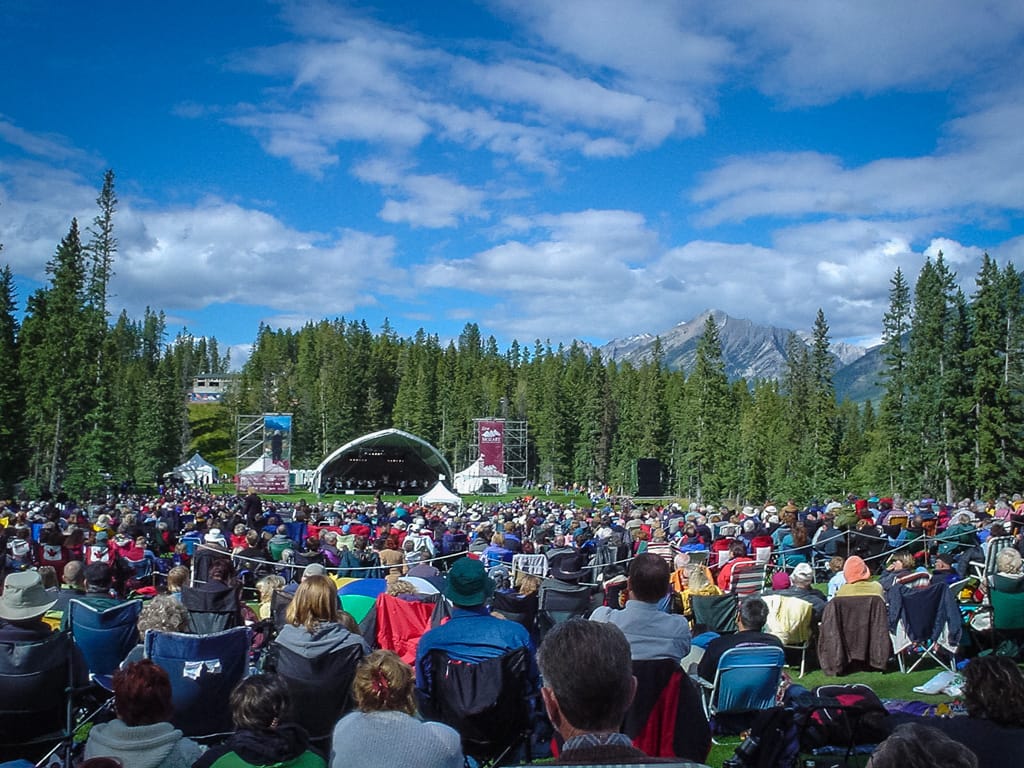 Just a thought to the event planning team at the Calgary Philharmonic Orchestra: the next time you say "festival seating", make sure you either enforce it, or don’t mention it at all. People will abuse it to no end, and all it does is create friction between patrons. Why? Because, simply put, people are jerks and look out only for themselves. They have no qualms about putting up chairs in front of people who came on blankets (which were allowed, and dare I say encouraged by your instructions). If you do allow full-sized seats, how about designating blanket and festival seating in front of the full chair seating, or put the full chairs off to the sides and allow blankets in the middle?

Luckily, Alex and I managed to keep some space to ourselves. 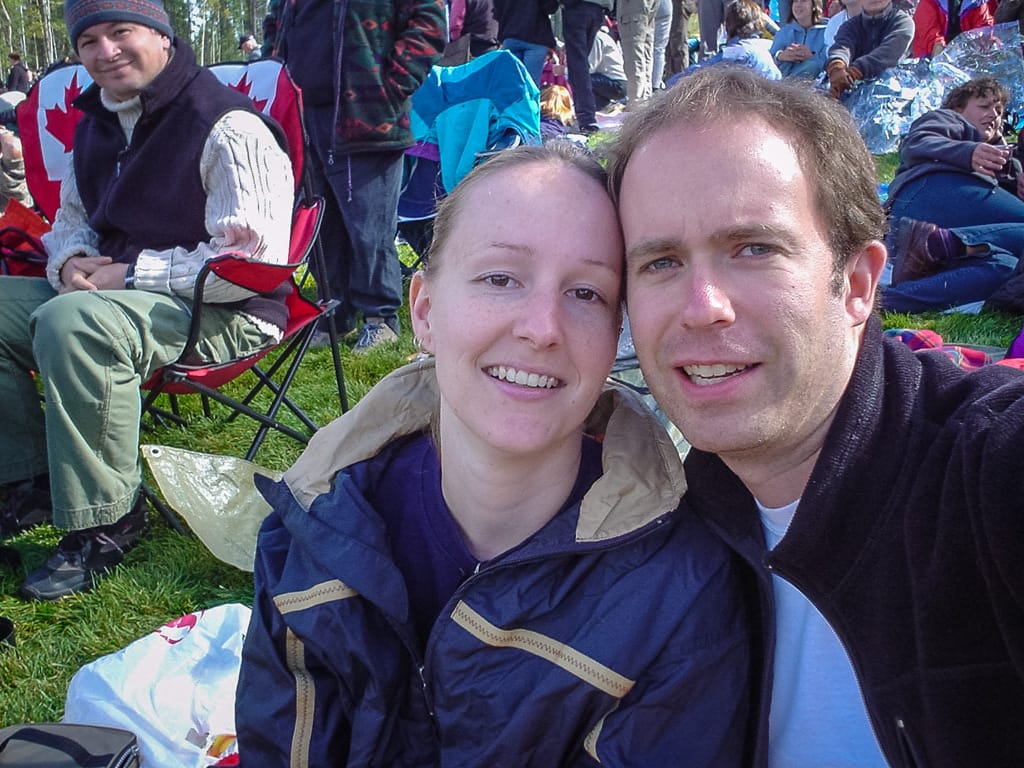 The concert ran long. Originally supposed to finish at 16:00, it didn’t end until 16:45, completing with an unscheduled rendition of the Can-Can. Many people kicked up their heels to that — those who hadn’t already tried to leave.

This is where it got really ugly.

You can’t send 7,500 people down the golf cart paths at once. It takes a bit of effort. So the line moved very slowly. Also, you can’t put 7,500 people onto busses the way the organizers had envisioned. Their idea? Load up 4-5 busses at a time on the bus loop, send them up the hill and off to the parking lots, and bring in 4-5 more busses to be filled. On paper, it seemed like a good idea. Here’s the problem: on paper, everyone behaves.

Rule #1 in event planning: people will never behave on their own if you don’t try to control them.

The line moved painfully slow around the vendor tent at the bus loop. When we finally reached the other side, we saw, quite literally, a sea of people. There were no lines, and since all the volunteers were watching the crowd go down up on the paths, there were hardly any down at the loop to control the crowds. So what happened was a mess: people standing where they wanted to, trying to force their way onto the busses as they came by, and getting on where they could. Busses were sometimes half-full (or worse, completely full) starting from the far side of the loop (these selfish folk walked around the crowd, circumventing the honour system completely), preventing people at the front of the line from being able to get on.

It wasn’t until people started to vocally complain that something was done. By that point, however, control had completely laspsed, and the system was mere moments from breaking down. Busses couldn’t be filled fast enough, and many had become so impatient that they were virtually standing on the road, blocking the busses. It all came to a head when one of the busses got too close to the inside of the loop, and almost rolled over onto its side. (Luckily, it didn’t, and no-one was injured.)

Almost immediately, people started walking up the hill in droves. Patience had totally worn out, and we were ready to walk back to the car rather than wait for the busses to finally get their acts sorted out. When Alex and I reached the top of the hill, we found dozens of busses waiting, as if we should have all just come up there in the first place.

I was amazed, even dumbfounded at the sheer idiocy of how poorly this had been handled. Don’t think you can control 7,500 people trying to get onto busses? Of course you can, but you have to run it like Disneyworld: forcibly put people in lines, and let only so many people through at a time. Let everyone know, right to the back of the line, how long the line is, and how long you’ll have to wait to get out. When you fill the bus, make people go right to the back and fill to the front. When people sit down at the front, they block everyone’s ability to get in. Remove constrained loading/unloading areas (like the loop), and go to the road. Load 10 busses at a time, and count off EXACTLY the number of people per bus, so there’s no question of too many or two few.

It was that level of totalitarianism that was missing.

A question to the Calgary Philharmonic Orchestra: you want to know why you’re losing patronage? Take a wild guess. I’ll give you a hint: if you’re running your business the same way you run that festival, you’d better start shopping out your resumes.

‘Cuz I ain’t the only one who noticed the problems today.