No rooster, just the sounds of patrons leaving their rooms. I think I prefered the rooster.

The Chateau’s name is a little misleading. One is brought to think of the Canadian Pacific (now Fairmont) hotels, with the old world grandeur and luxury. Make no mistake, folks, this ain’t the Banff Springs. It’s a 1950’s motor lodge with a fancy roof. But it’s comfortable, and the grounds a nicely kitchy. Besides, it’s a family business, and run very well. 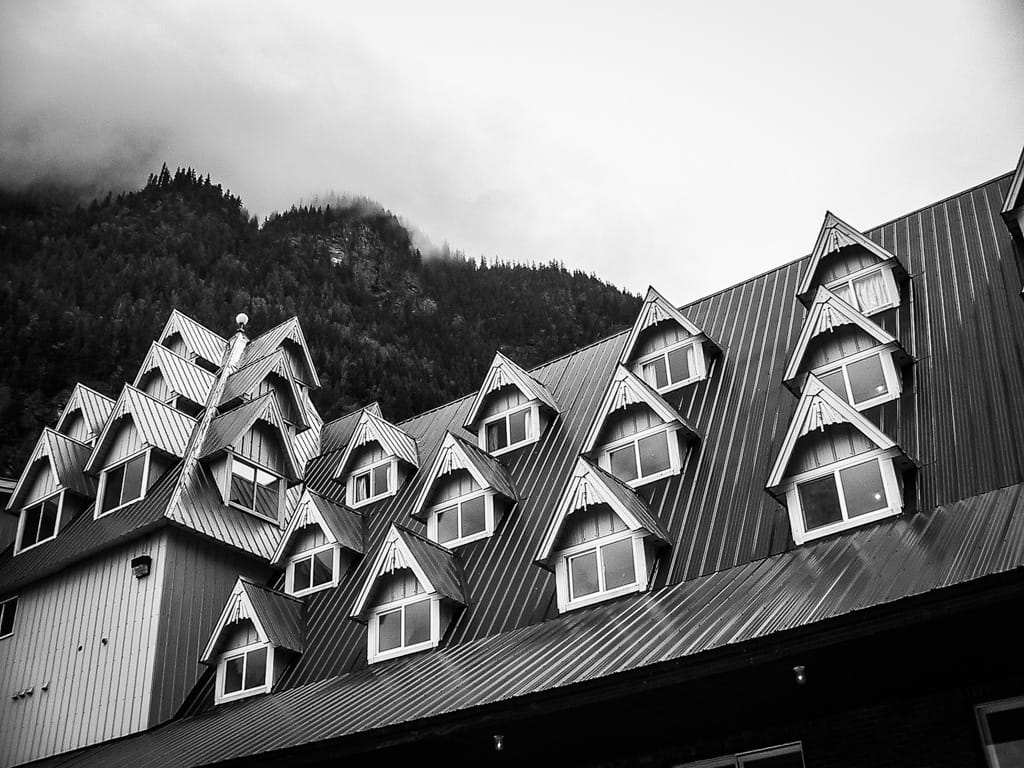 Cleaned up, checked out, and darn hungry, we made a break for the restaurant adjacent to the hotel. It’s tacked onto a gift shop, in which we spent a bit of time after eating. Hitting the road, we actually double-backed on our route for a while. We weren’t going right home. We were going to the Enchanted Forest.

Some of you have probably seen this before. A pair of green castle tower peaks at the west end of the parking lot, followed by a candy cane house, windmill, and castle walls. It seems kitchy and the sort of thing to avoid. Until today, that has always been my opinion of it. Alex had been here years before with her father. And she desperately wanted to go back. I figured that, if nothing else, it would be good for a laugh.

The Enchanted Forest was built by Ernest and Doris Needham as a place for Doris to put her collection of hand-made cement fairy tale sculptures. Using only hand tools, Ernest and Doris created many of the paths in use today, and the candy cane house in which they lived. When the Trans Canada was pushed through in the late 50s, people began to stop and take a look. Finally, on 1 July 1960, the Enchanted Forest opened to the public despite a lack of a phone line (put through in 1980) and electricity (1981). By 1970, over one million visitors had walked the forest.

The Needhams have long since left the Forest, but the dream continues with its current owners. They’ve expanded the forest, keeping to the Needham’s vision, and even added a nature trail free of fairy trappings. 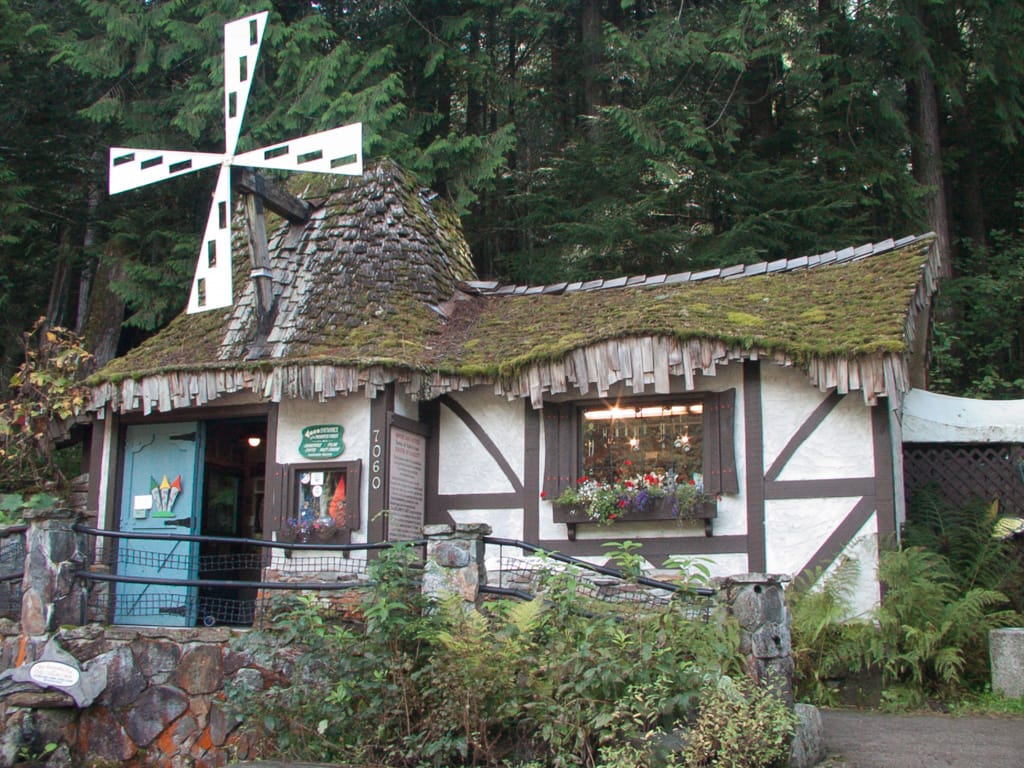 So what is the vision? Every fairy tale you remember (and a few you don’t). They’re all there. Even stories that aren’t fairy tales, but exercises of the imagination (Peter Pan, Winnie the Pooh, and Alice in Wonderland, to name a few). Yes, it’s meant more for kids, but even the young at heart can have a lot of fun.

Especially when there’s hardly anyone else there. For the first hour or so, Alex and I were almost alone in the park.

We walked through the castle (with its dungeon, including a motion-activated skeleton in the dark, which caught Alex off-guard), and then into the forest to look at all the exhibits. They’re spaced apart, enough that you feel like you’re moving from piece to piece. While the sculptures and “buildings” are artificial, everything else is real. The forest is virtually untouched, kept intact without plantings of any kind, and with as few trees removed as possible. Paths allow visitors to walk around without damaging any of the surrounding forest.

Partway through, we found the nature trail, and decided to walk its length. We weren’t in a rush, and I had lost all sense of time (hence, felt no need to rush). By the time we’d returned back to the fairy world, a few other families had arrived with their children. One couple asked us if the trail would be suitable for their two small children. Alex and I suggested they skip the trail this time.

Finishing the loop through the park (and gift shop) in about two hours, we hit the road (with me driving) for Revelstoke. Among other things, we needed gas, badly. We arrived at the Petro-Canada on fumes. It was when I was trying to pay for gas that I realized that my credit card was missing. First, panic set in as I worried about the card being misused. Then it hit me, slowly at first — the card was still at the Milestone’s in Kamloops.

I would later call the Bank of Montreal and report the card lost. ‘Cuz I sure as hell ain’t going back to Kamloops for a lousy hunk o’ plastic.

I coaxed Alex to go into Revelstoke (I’d never been in the town before) to look at the Railway Musem there. They have a Mikado that I’d always wanted to see. Ernie spoke highly of it. However, with the loss of my credit card, I was suddenly not so much in a generous mood. Although the cost was minimal (only $6), I cheaped out and suggested we not go instead. I settled for a photo of a passing coal train.

That was a bit of a mistake on my part. The direction of the light sent me to the opposite side of the tracks from Alex’s car to get the photo. And if you’ve seen a coal train on CP’s Shuswap Subdivision, you know how long they are — a mile, at least! And since it was leaving the Revelstoke yard, it wasn’t moving particularly quickly.

One advantage of having to wait like that, you see a few things. No, I didn’t magically find my credit card. I found another 7-11! Once the train had moved on, we made another stop to refill our Slurpee addiction before continuing to Golden.

Rogers Pass is an impressive place, although I had never really given it appropriate credit. Having seen the Rogers Pass Interpretive Centre on our way out (I hadn’t been driving at the time), I suggested we pull in for a gander. Luckily, our Parks Canada pass warranted us free entry.

If you don’t learn something new every day, you aren’t trying hard enough. Today was definitely a learning day. When the Canadian Pacific had first come across Rogers Pass, it had to build an impressive set of bridges and snow sheds (31 of them in total) to keep the rail line clear of avalanches and the inevitably deep snow fall. In 1916, some of the difficulty crossing the mountain was solved by the construction of the Connaught Tunnel.

Rogers Pass continued to be trouble, however, until 1980, when CP built the longest railway tunnel in Canada — the MacDonald Tunnel, over 25 kilometres under the mountain that gives the tunnel its name. The original rail line across the pass no longer exists, most of it having disappeared with the construction of the Trans Canada Highway. Only a few relics of show sheds and some of the old rail bed still exists. One day, I’m going to have go back and take a closer look.

Smitty’s fed us lunch in Golden. It was obvious this particular restaurant had been there for a long time, not only from the décor and construction, but also due to the quality of food. They were obviously comfortable with feeding truckers. I’m comfortable in knowing that I’ll never be a trucker, if for no other reason than I’d have a tough time trying to eat at a lot of the places they seem to frequent.

Alex took over driving for the remaining portion into Calgary, starting with a quick burst into Golden for, you guessed it, another Slurpee. (Hey, when you don’t get ’em when you want ’em, you build up a craving that takes a few days to kill off.)

Field soon appeared in view, and the end of BC was coming up quickly. Before we tackled the Big Hill, Alex suggested a detour: Takakkaw Falls. I’d seen the sign for it a dozen times, but had never been there. So without further consideration, in we went.

The road out to the falls is about 14 kilometres long. It winds all over the place (how they build those roads is beyond me), and includes the most insane switchback that I’ve ever seen. It’s so tight that signs suggest that RVs back up and down the middle portion because there is simply no way for them to actually turn around.

The falls are a bit of a hike from the parking lot. We had to make a quick stop at the toilets before we went off, though. Due to the CUPE strike with Parks Canada, the toilets weren’t in the best state (Alex ended up having to use the men’s room).

Takakkaw Falls are very high — about 254 metres tall. During the summer melt, it’s apparently a torrent that soaks anything around it. At this time of the year it’s a comparable trickle, though still quite exciting to see. I need to go back there late spring next year! 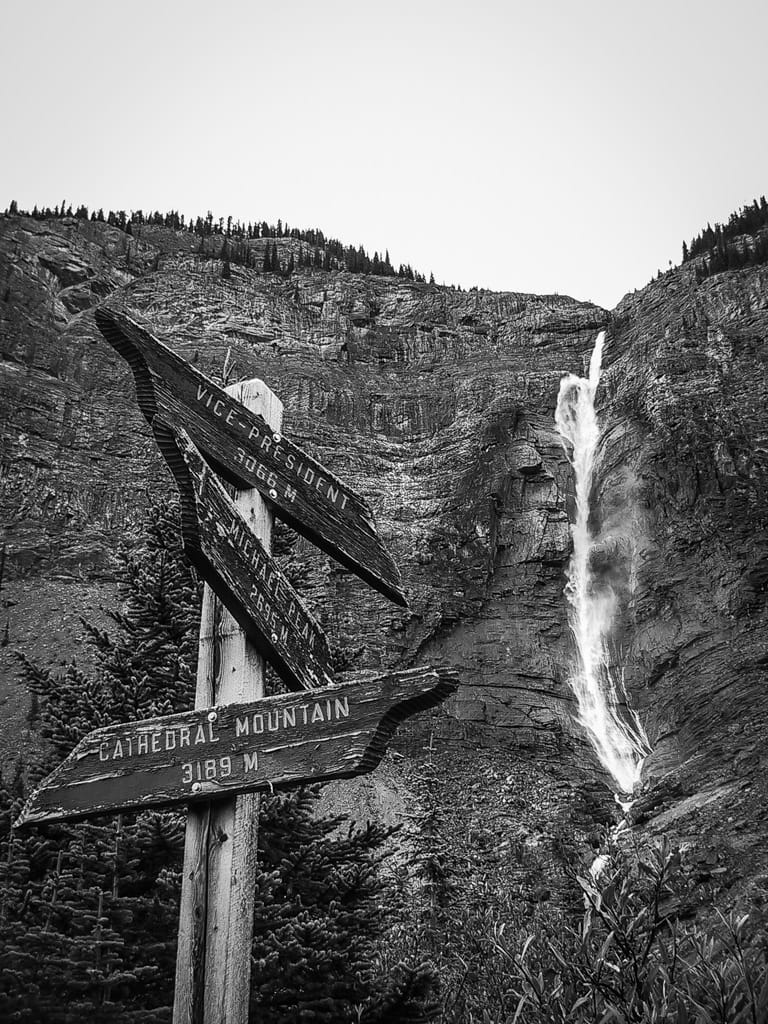 Alex wanted to stay the night. We had the tent and sleeping bags, and certainly there would be available campsites. But I wanted to get home. The trip was great, but I wanted to bring it to a close. Besides, I wanted clean clothes, and didn’t feel like having to get up super-early to back up and get back to Calgary so I could go to work. I’m tired enough in the day as it is without having to do all that.

Aside from a brief stop at the Spiral Tunnel lookout on the Big Hill, we didn’t stop again until we were back in Calgary. The trip back was without a doubt the worst part of the trip we’d had. Perhaps a little sympathetic with our mood about returning home, the skies had opened up and dumped a collossal storm upon the Alberta plains just east of the mountains. When we exited the mountains at Seebe, we could barely see the road.

It was like that for most of the trip to Calgary, and Alex was stuck driving. The rain was like driving under Takakkaw Falls, and the spray from the passing trucks didn’t make it any better. I’ve never seen Alex so tense — she couldn’t totally tell where the lines on the road were. Needless to say, she was relieved to see the rain let up when we passed Stoney Trail.

Tomorrow is going to be ugly. I know it. I can feel it. I’m going to walk into the office, and everything will have gone to hell in a handbasket. I don’t need a crystal ball, this is the pattern that seems to have been set for me. This is why I don’t like going on vacations: the crap I see when I return pretty much wipes out all the good feelings I had about being on vacation.

The trip is over, but in a way it’s opening a new journey. What’s that, you ask? Well, it’s been seven days with Alex. Non-stop. Always together. Never apart. Not once did I feel like I had to get away from her for a while. Each and every moment was a pleasure, nay, a joy! This, I think, is one of the great tests. Spend a long time with someone, and you can still walk away happy, then you’ve found something good.

If this isn’t a sign of true love, I don’t know what would be.