No-one told me that we were doing any surprises this weekend. ‘Course, then it wouldn’t be a surprise, would it?

Allen (Alex’s father) took Jean (Alex’s stepmom) down to Cranbrook so she could catch a flight out to southern Ontario for a wedding. This meant the condo was quiet for a number of hours. That meant we didn’t get up until late. I love sleeping in.

Before the major adventure of the day, Alex and I took a fairly brisk walk down to the giftshop on the Highway. Alex is seeing an old friend of hers while we’re in Maple Ridge, and she wanted to have a gift of some kind. I got caught up in a book on backroads in Southern Alberta, which accurately placed all the rail lines with access roads. I almost had to buy it.

Following our lunch (leftovers from last night’s pork roast), we piled into Jean’s car (a little red two-door Honda Civic) and headed towards Fort Steele. But before we headed out the door, Alex turned to me and told me to bring my nice clothes with me. As far as I knew, we were going to Fort Steele, and then to the Canadian Museum of Rail Transportation in Cranbrook. Unless there was something she wasn’t telling me, which obviously there was, there wasn’t any reason for me to bring my nice clothes. My Suspicion Alarm was going off quite loudly.

The trip down to Fort Steel was quite nice, at least for a section of highway that I’d never been down before. (I suppose if I went down it more than once, the drive would get a little, well, boring. It took about an hour to get to Fort Steele.

Fort Steele was originally an outpost of the North West Mounted Police back in the 1880s. It was small, and key to the expansion of the Kootenays. It fell victim to the typoid epidemic of the late 1880s, which the Fort (and townsite) never fully recovered from. It became a ghost town for many years before the BC government turned it into a park. Now it’s a tourist attraction complete with some original buildings, some reconstructions, and a couple of imports for good measure.

One of the imports is the small narrow-guage railway that ferries visitors along a mile or so stretch of track, pulled by an old logging camp locomotive from Chemainus, number 1077. When I first saw it, you couldn’t have convinced me that it was a Canadian locomotive — it just didn’t look like one. It certainly wasn’t either Canadian National or Canadian Pacific, which more or less meant American. It never occurred to me that it might be something else. Fortunately, a plaque on the hogger’s side told the story. It also explained the presence of the British passenger car that was the third part of the short train (probably because it was the only passenger car the museum could get that ran on that gauge). 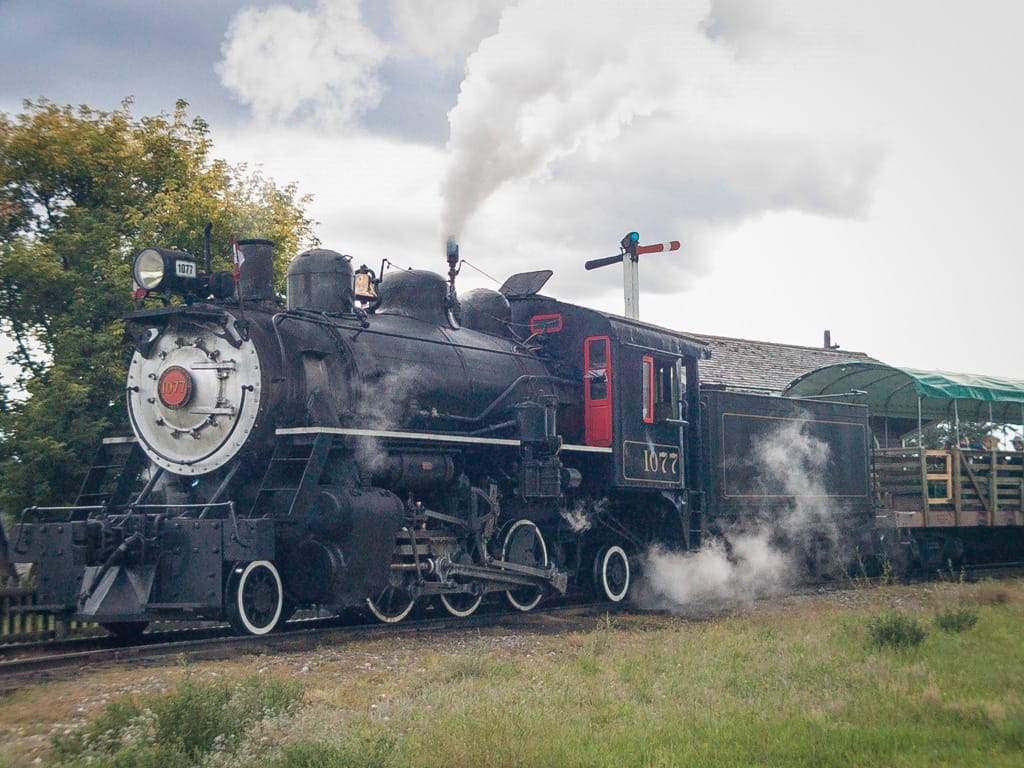 We hummed and hawed at the entrance, deciding whether or not we wanted to go in. Alex wasn’t sure, Allen didn’t seem to mind, and I was just following their lead. I wanted to go in, but at $10.50 a pop, wasn’t about the press the matter. Finally, though, we decided, forked out the fee, and in we went.

I can only assume the grounds aren’t too far off from what had once been here. The old fort was reconstructed, but was likely very close to what had once been there. The interior of the soldier’s barracks looked reasonably accurate (given that I have no particular memory of what it could have originally looked like), and downright inhospitable. The interior of the officer’s quarters were luxurious by comparison, and further reinforced the tradition of class separation within the British military (police, or otherwise).

We encountered some ill-mannered sheep (one of which sounded like it was belching constantly), highly-tempting candies, a few other guests (I accidentally uttered "geseundheit" to a German family), a few horses, and the various staff in costume and personna (including one group who were holding an etiquette lesson for the women). Otherwise, the grounds were fairly deserted, and some of the exhibits were closed. I can only assume, as it was a Friday, that it was either due to the weekday (possible) or the blatantly bad weather that has been plaguing this region of the country all summer (in my view, far more likely).

We didn’t stay too long, and headed back towards the car. But not before I got a couple of pictures of the train, and got some ice cream with Alex.

And so we resumed our trip south to Cranbrook, eventually ending up at the Canadian Museum of Rail Transportation. I’ve always wanted to go there, ever since I heard about the exhibits the museum had. And now that they’d moved to a new location with new facilities, I wanted to go even more. This, little did I know, was part of the surprise.

CP 2816 had arrived only minutes before us, having brought people to Cranbrook from Fernie (about 100 kilometres away) at a cost of $200 per person (assumedly a charitable donation to the museum). I had worried that perhaps the surprise might be a ride on the train. While I would most certainly love the experience, that cost was unconciably too high. 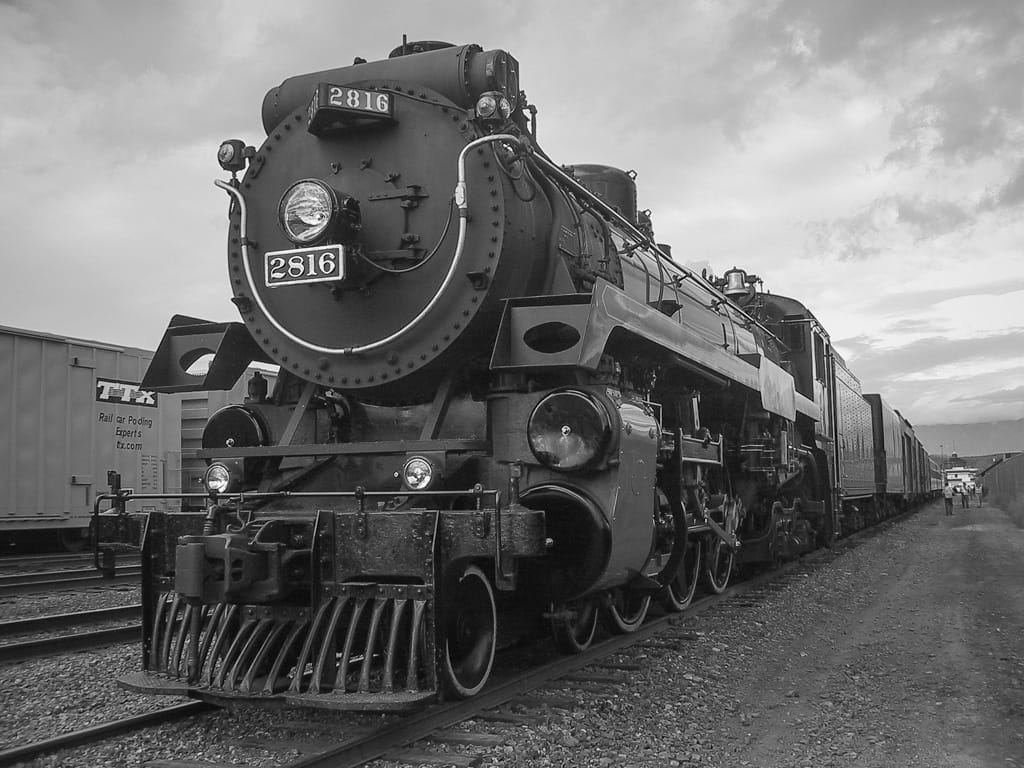 The surprise, as it turned out, was dinner. At the Museum. Specifically, the gala opening of the museum, held in the Royal Alexandra Hall. I had completely forgotten about the dinner and the event. I had mentioned to Alex that we should see the hall, but Allencame up with the idea that it would be nice for us to attend. Little did I know.

And a gala it was. Just because we were in Cranbrook didn’t mean that we didn’t see people dressed in their finest for the event. This, I can only assume, was the sort of thing people remember. This was a chance to eat in the Royal Alexandra Hall, formerly the café of the Royal Alexandra Hotel in Winnipeg, one of Canadian Pacific’s Hotels. It was demolished in 1971, but not before a wise husband and wife preserved the interior of the hall for future generations. It sat in storage for 25 years before news of the museum’s goals caught their ear. They donated the whole thing, and it took over two years to reassemble it. The work isn’t entirely done yet, but he results so far are breathtaking. 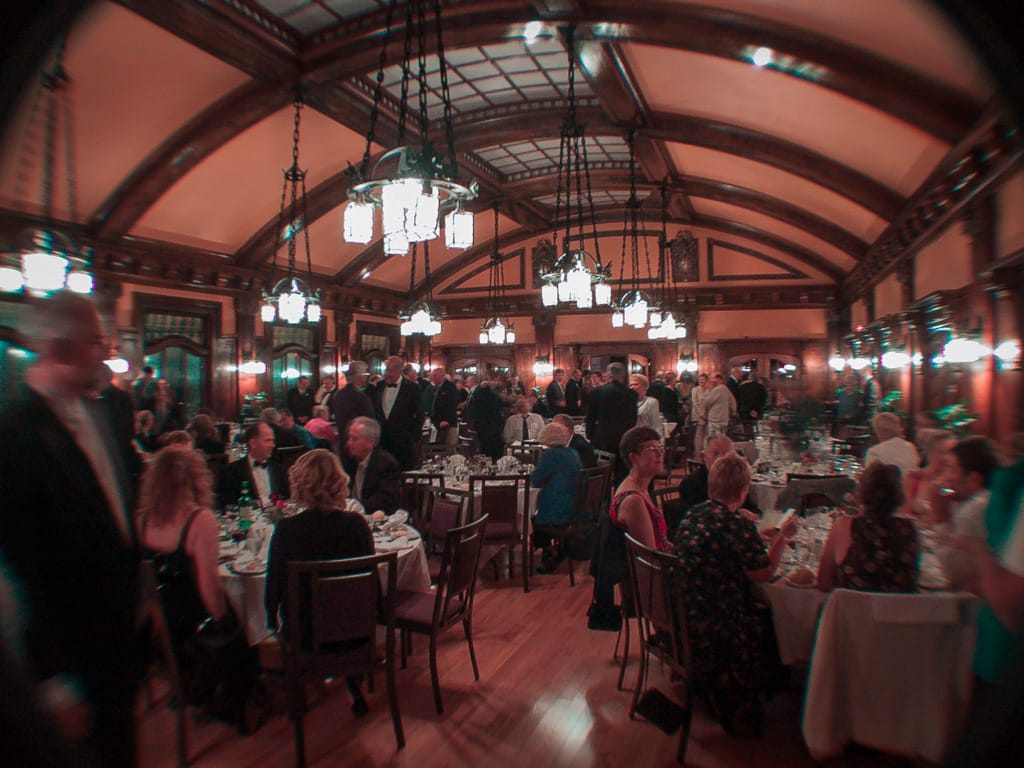 Equally breaktaking was the eight course meal (we only make it through six, having to leave early because of our hour and a half trip back to Fairmont). We sat at a table with five other people, all of whom were from the area. They were delightful, telling us their histories, the history of the museum, the history of the hall, and many of the reasons why living in Cranbrook was such a joy. Admittedly, it’s not the first place I’d ever think to move to, but I could see some of the appeal.

Our menu was derived from the menus of the Royal Alexandra’s history. They were prepared using CP Hotel’s own rules. The meal was exquisite, even if prepared only by local Heidi’s Restaurant:

It hurt to leave so early, but it was best we left. Most of the others were staying in town, and it simply wasn’t an option for us to stick around. We had to get up early to drive out to Ruskin, and we had a 90 minute drive a head of us.

Was I surprised? Darn right I was, and quite happy about it, too! But not as surprised as that deer we almost hit on the way back.