There’s nothing quite like waking up to the sound of lawnmowers. Rousing, yet entirely annoying.

We started the day off with a mom saver. This is generally a breakfast meal, though I suppose you could just as easily use a version of one for any meal of the day. The breakfast one we had consists of eggs, cubed bread, cream cheese (cubed, or something similar), some spices, and thrown in the oven to cook for 45 minutes. Throw on some maple syrup on top, and it’s pretty tasty. There’s also a ham and cheese version that I’m dying to try some time.

Showered and ready for the day, we decided that we weren’t heading off anywhere in particular until after lunch. This was a bit of a surprise to me, since we didn’t finish breakfast until almost 10:00. To wait only a mere two hours before lunch seemed awfully short. But then, Alex seems to have an insane metabolism — one I can’t even begin to hope to keep up with.

So instead of heading off to Kootenay National Park for our hike, Alex and I decided to go for a little walk. The Mountain Villas of Fairmont Hot Springs (where Alex’s parents have a timeshare) are built around the Fairmont Creek, which is the outflow of the hot springs. The creek has been modified a bit over the years, mostly to accommodate the resort, but still flows into the Columbia River.

We hiked over to the creek, not far from the condo, and started to walk up its shore. But the inviting burbling of the creek soon drew us to its side, and in Alex’s case, into the creek itself. (Had I been walking with my flip-flops, I would have followed Alex in. As I was wearing my hiking shoes, that wasn’t bloody likely.) We went up the river (and in the river) until I was driven out due to lack of dry walking space. Naturally, this was when Alex lost one of her flip-flops (which she later recovered).

The creek bed isn’t like a regular creek — pebbly, with small stones, algae, and fairly free-flowing. This creek had a beige "liner" that the water coursed over and around, the result of years of mineral deposits. (It looks like someone poured concrete all along the creek bed to smooth out the bottom.) The minerals caked on tightly to anything and everything. Trees and branches that had fallen into the water were blended in with the creek’s bed, making it hard to tell where the tree ended and the creek bed began. Rocks in the creek created little pools of water. Being so warm, the pools were very tempting to sit in.

About three-quarters of the way up the creek from where we started, we came to a waterfall. The mineral deposits up above created a chute, causing the water to fall further out into a large pool before cascading down terraces into the creek itself. It was a great place to sit and relax. 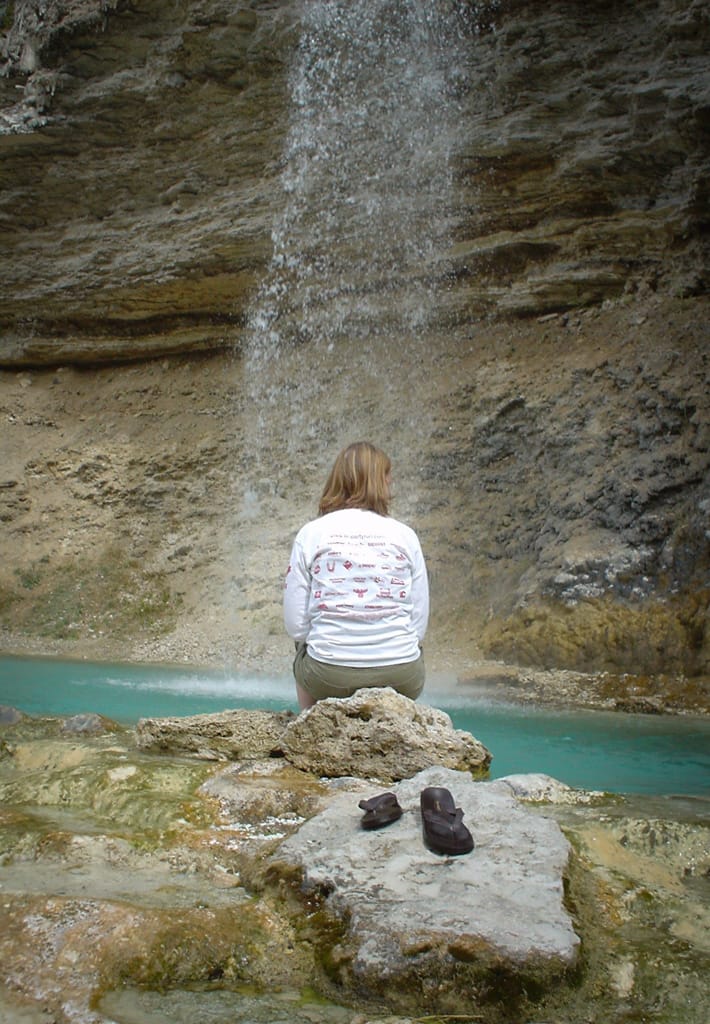 Eventually, we found ourselves at the hot springs pool. We stayed only long enough to check out the price and the times before heading back.

We arrived in time for lunch — leftover macaroni and cheese, with a Greek salad. I find Greek salads to be an interesting anachronism for me: while I love the taste, I can’t stand either olives or the raw tomatoes found in them. I am very good at eating around things I don’t like.

Naturally, this preciptated a rather interesting conversation about picky eating habits. I hate olives, raw tomatoes (though I can eat about anything made with cooked tomatoes), sour cream (I’m sorry, but it’s sour — that just seems wrong to me), yogourt (I can’t anything with a ‘y’ and a ‘g’ in its name, but freeze it and I’m a happy camper), and I’m not fond of mushrooms (although as a kid, I used to eat cream of mushroom soup as if my life depended on it). We’ll forego with the more obvious stuff, like liver...

Until the beginning of this year, Alex says she was far worse.

Following lunch, Alex, her father, and I all headed out for Kootenay National Park, and the Juniper Trail. This is a fairly short (three kilometre) hike that runs from Highway 93 (just inside the south edge of the park), down into the valley, up the other side, and around over to Radium Hot Springs. You have to hike back to the start of the trail on the highway.

The weather was cool and overcast, with the odd spot of rain. But nothing too serious. It didn’t take long for Alex to shed her sweatshirt, with Alex’s dad not far behind. I rolled up my sleeves and unzipped my fleece, but never took it off. I’m a big fan of regulating temperature, rather than having to rapidly adapt to it.

Along the way, we saw part of a waterfall, mountain goats, a few other brave souls on the trip, the valley seen from the top of the trail (which must be gorgeous on a sunny day), and lots and lots and lots of trees and rocks ... and water. 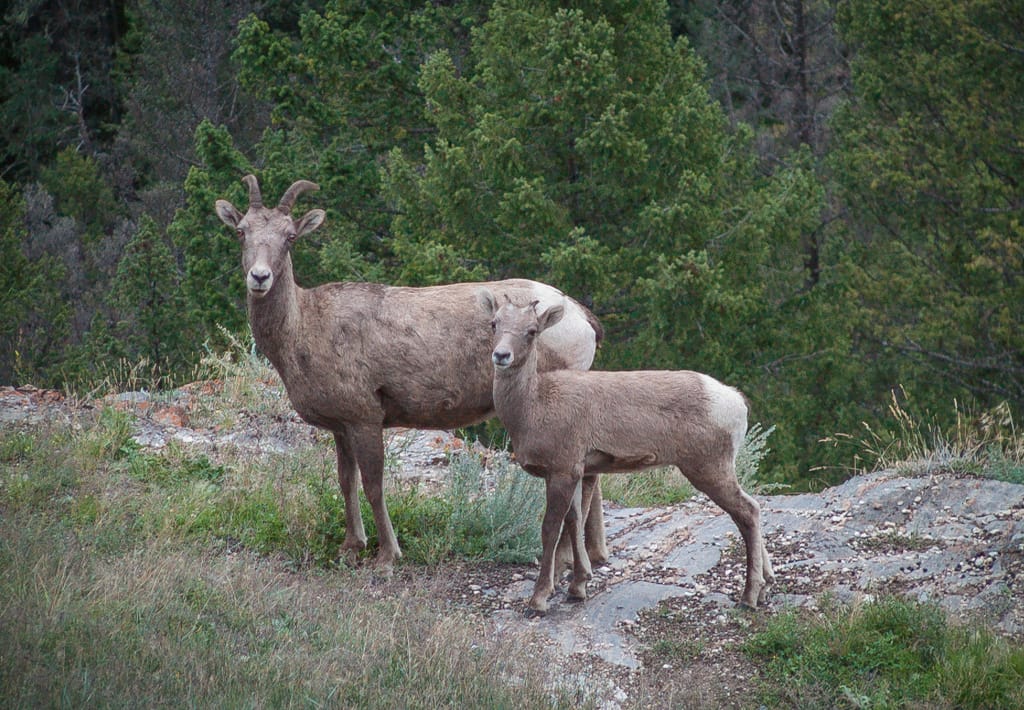 We headed into Invermere to make a stop at the used bookstore (Alex really needed to see what she could find), and to get food for dinner. I had offered to cook. On the menu tonight was apple walnut-stuff pork loin, garlic mashed potatoes, and grilled asparagus. The loin split part-way through cooking, I didn’t have beer for the potatoes, and I didn’t cook all the asparagus. But otherwise, the meal wasn’t half bad.

I do feel like I’m trying to show my worth, and this was part of it. Let’s be honest — these are Alex’s parents. I need to prove that I’m not some yutz. To be honest, I think I’ve done that, or at least am well on the way, and the meal seems to have been a cap.

Before it was too late, Alex and I made use of the hot springs. The facility is huge, many times larger than Banff’s springs. It’s the size of an Olympic swimming pool, divided into three parts. A little over half of it is a general swimming pool, with some lanes so people can can do laps. That section is about 32 degrees (Celcius, of course). There’s another section with two diving boards, also 32 degrees. Then there’s the hot section, which varies from about 36 degrees to over 40 degrees, depending on where you sit in the pool.

We arrived at about 21:15, about 45 minutes before the pool closed for the night. It was quite full of patrons, most likely taking advantage of the lowered rate in the last hour of operation. It wasn’t so full that we couldn’t get around. We lounged, I even took a dive (although I was very tempted to do a cannonball). We were out of the pool in about half an hour, having had enough heat for one night.