I wasn’t hungover. Since I had only two beers at the Google party (and they ran out!), I wasn’t really reeling from any overdoses. I skipped the swim in favour of a little extra sleep.

Craig finally pulled me out of bed with a phone call, and we headed up for breakfast. Our tales of the previous night were fairly tame. It was ironic that the "upstart" of the industry, and now current reigning king, also had the most conservative party.

Grabbing our stuff on the way back down, we proceeded to the first event of the day: an Executive Roundtable, featuring VPs from Yahoo!, AOL Search, Ask Jeeves, and MSN Search. (Obviously absent was Google, but the SEC doesn’t allow them to postulate on anything this close to their IPO. Danny jokingly offered to forecast on their behalf.)

On the whole, the session was a bit of a wash. The AOL guy kept talking in circles and didn’t really say anything of note. The Yahoo! guy was an old hat, and had done this quite a lot. His measured speeches and "insights" were crafted to not say much, but say it well. The Ask Jeeves representative was possibly the most informative, but with them being #8 on the list, he really didn’t stand to lose anything by being there. All three of them eyed the MSN guy very carefully. Microsoft has been tinkering away in their garage for a while, and you can already hear the roar of the massive engine they’ve been building in secret. Everyone knows what they’ve been doing, but the question is what impact it will have.

Craig and I were not impressed with the MSN guy — he kept giving the company line. Following the roundtable, we were commenting about this very fact. Just off my left shoulder, I spied a woman listening in to our conversation. After a couple of moments, she stepped forward and introduced herself. Anna, from MSN.

(At this point, you’d think we should probably take back the things we were saying. We didn’t. We meant every word, and apparently that’s what she was interested in.)

The three of us chatted for a while about MSN and their plans for world domination (okay, I added that last bit — Anna didn’t mention anything about that). We knew that once MSN gets their search system up and running, they’ll drop Yahoo! as their search provider. Our question to her was, what will happen to their pay-per-click program? Overture currently powers MSN’s PPC system — so are Overture’s days numbered?

Anna, although only having been with MSN for four months, knew the answer. Of course, she didn’t tell us. One advantage of having listened to American politics on TV for so many years, and having a degree in rhetoric, we have a great ability for disseminating the truth. But not like it wasn’t much of a stretch, anyway. Without actually saying it, Anna told us that while they value their partnership with Overture, Microsoft does want to flex its own muscles. One day, Bruce Clay will have to update his diagram so that the MSN circle no longer has arrows going into it.

Successful Site Architecture came up next for me. This was a particularly interesting topic. Although a Fundamental course, it shed a few points on the work that I do every day. Nothing new, mind you, but confirmation of the direction we’ve been going in. (Although, when I get back, I need to change a few standards.) Everything I’ve seen paled in comparison to Trademark Brand Protection Issues. Despite the fact that my blood sugar level bottomed right out (I feel asleep for a short while), the issues raised in the seminar will be extremely valuable for us and our clients, as we’re sure to run into the same problems. Finally was the Very Vertical session, which was a discussion about other search engines and directories than the big ones — engines that are dedicated to specific industry and topical verticals. It wasn’t a very full session, but should have been — this wa a great session full of strong information.

The last session also shed light on the post-Yahoo! party. Everyone seemed to know that there would be a party, the question was who would hold it, and where? It would be Eon Media, a division of SBI.Razorfish (one of our competitors). The location? The Flying Pig Pub. I made sure to grab some cards to pass them around to the gang, so they’d know where to go.

Following the main sessions was Danny’s Evening Forum. Basically, his chance to do a Phil Donohue schtick, run around with a microphone, and have the audience be the panel. Questions were raised, questions were answered, and the results were exceptionally interesting. First, we need a form of Better Business Bureau to handle all the black hat and rogue SEM firms that are giving the rest of us a bad name. Second, although we know MSN will dramatically shift the search landscape, none of us believe that it’s going to completely steamroller Google or Yahoo! — it’ll be roughly a three-way tie.

After a quick run up to our rooms to dump our bags, Craig and I headed over to The Tech Museum of San Jose for Yahoo!’s soiree. This was the number two search engine’s attempt to make up for Google’s bash the night before. Not nearly as extravangant as Google’s, Yahoo!’s party was ripe with food and drink, and a very fun environment to play around in. Museum staff were on hand to help us out with some of the exhibits (a demonstration of a rocket pack, surgical implants and how they work, and virtual scanning to name a few). Unlike Google, Yahoo! didn’t run out of beer (though there was a fear they would). 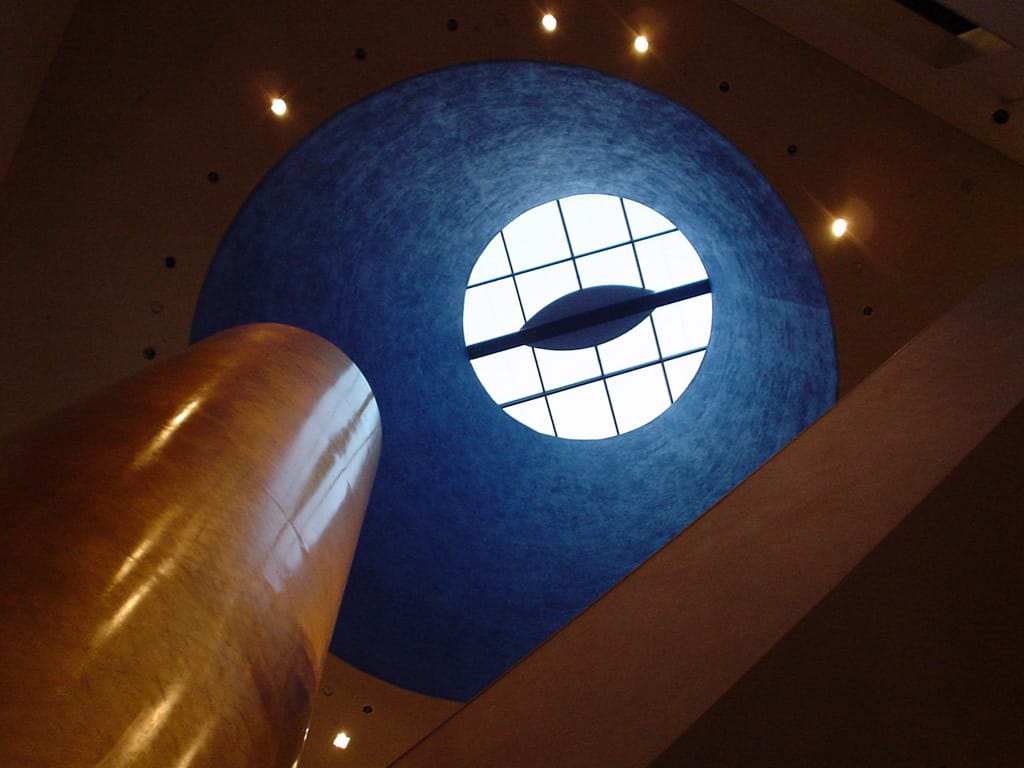 I took a spin on the rocket pack simulator. You sit in a large, very uncomfortable chair that has three pads that support it on a cushion of air. You sit underneath a mockup of a satellite that has three circles of blinking green lights. The idea is to guide the chair so that a red light (projected from the chair onto the satellite) covers the green lights. That set will go out, and the next illuminate. It was fun.

Especially since I’d already had a couple of beers.

The museum was reminiscent of the Ontario Science Centre in Toronto, with a lot of hands-on experiments. Guests either spent their time playing around, or stood and chatted with others. It was a better networking experience than the Google party, but we were still hampered by size and the fact that we were scattered across two floors (with the ground floor in between, for added separation).

Around 21:00, Brad, Megan, and I decided that it was time to move to the second party. The Yahoo! party was showing signs of beginning to wrap up, and we wanted to hit the next venue before it was too late.

Well, at least Brad was supposed to come with us. Somewhere along the line, we lost him. Instead, we picked up another fellow SEMer from Vancouver, whose name I now forget, and headed out in search of our destination. A vague map and an accurate address finally brought us to the bar. There were only about 20 people there upon arrival. It was only a short time before the crowds started to arrive, Craig appearing just before them.

It wasn’t long before the Eon Media party was turning into another LookSmart bash. Booze flowed freely, people shouted above the din of laughter and music, and we all generally carried on until last call brought an end to things around 1:15. Craig, Megan, Brad, and I headed out into the night, trying to find something new.

Which was a lot harder than it sounds. San Jose pretty shuts down at about 1:30. The hotel’s bar closes at midnight! That didn’t stop Craig from acquiring two bottles of wine from the restaurant’s manager (who even brought them up to Craig’s room).

Nor did it put a pause on Brad, who decided that he didn’t want wine — he wanted beer. While we were waiting at the bar for the wine to be prepared, Brad decided to acquire his beverage of choice. The bar was technically closed, so wouldn’t sell him any. Yet, a moment later, I saw Brad holding a Samuel Adams. How on Earth he’d produced it out of thin air was obvious when I saw the swinging kitchen door just behind him.

Laughing at his audaciousness, I commented that he hadn’t thought about the rest of us. Brad smiled and vanished again, returning with two Heinekens. Surprisingly enough, the bar staff didn’t notice, nor did the manager comment on the three cold beers we brought to Craig’s room.

The four of us went up to Craig’s room to engage in continued conversation and "wine tasting" until well into the wee hours of the morning. Brad didn’t last too long, having consumed far too much beer and booze for his own good. He staggered his way out the door and headed off for his hotel, somewhere in the general vincinity of I Don’t Know, and I’ll Find It Eventually.

The three of us continued until somewhere well after 5:00, after we’d polished off 2/3 of a bottle of red wine apiece. Megan and I were ready to pass out, Craig not far behind. I was more-or-less ejected from the room; Megan crashed with Craig.

It was already lightening outside when I crawled into bed.