The alarm started at 6:30. I hit snooze several times before I finally had the realization that I needed to get out of bed. Almost instantly, I knew that I was going to have an ill-feeling day. My stomach was empty and rotten from all the gin and beer, and my head felt like a boxer’s practice bag.

I tried to take in a swim before breakfast. I wasn’t able to make much of it. Alcohol poisoning usually retards physical ability, and exertion is a little difficult. But a little raise in the heart rate is better than nothing.

I went right up for breakfast after showering. I didn’t call Craig, as I figured he had to be feeling at least as bad as I did, if not worse since he drank more than me, and was out longer. A heaping batch of eggs and the greasiest bacon I could find was a start to me feeling better.

First up was the Keynote speech, delivered by our host moderator, Danny Sullivan. Danny is the most recognized search expert. It also doesn’t hurt that he’s a really good presenter. Craig missed it due to a conference call that one our our project managers scheduled him into despite the fact that he was 2,000 kilometres away.

That kind of annoyed me. No, actually, I take that back. It really pissed me off. Craig and I are here for not only our benefit, but also the company’s, and he missed the entire morning session because one person (who didn’t even really have the proper authority to boss Craig around, in my humble opinion) decided that their priorities exceeded everything else. I don’t appreciate that level of short-sightedness, especially where plans aren’t fully concrete. It’s unacceptable, in my mind. Craig and I both suffer as a result, since Craig’s absence meant two sessions we wouldn’t see.

Anyway, I went through four sessions, not including the keynote speech. (I would go until well into the afternoon before I found Craig again and found out what had been going on.)

The keynote speech was important. It was a chance for Danny Sullivan (the host moderator) to make his points about Search Engine Marketing and its power and future. In particular was the addressing of Seth Godin’s accusation that SEO is black magic, something I felt was quite inaccurate. (I’m sure he’s had many a retort since then.) I won’t doubt that it looks like black magic, but when you deal with a million variables, and have no control over 999,999 of them, you can’t always predict the results.

(And you thought I was going to mention something about any sufficiently advanced technology resembles magic, didn’t you?)

The Organic Listings Forum was quite solid, delivering a lot of very interesting information about how to handle listings without having to pay for them (a common problem in the industry — all the bang with none of the buck). Of particular interest was seeing Bruce Clay, one of the SEM heavyweights. Dynamic Web Sites, though a Fundamental track session, did shed a couple of lights and ideas on the the problems we face on a near-daily basis on the MBUSA account.

During the lunch break, I made a point of circulating through the exhibit hall, seeing what Critical Mass is up against for competition (there’s a bit, but not really anyone like us, surprisingly enough), and what other services are readily available. Some we might want to offer, but in the end there’s just other things we need to be aware of.

I met Mike and Albert from SiteLab (what I would assume is a competitor to Critical Mass, based out of Houston). We chatted about our respective clients and the challenges they often face. They have the US Navy as one of their clients — government contracts are simultaneously the best and worst ones to have.

After lunch, I dove into Search Engines and Web Server Issues. Sadly, the session was light on content and didn’t really provide anything we couldn’t have read from the PowerPoint presentations. Last up was the Optimizing Flash session, which is something near and dear to my heart (as I am regularly touted around the office as being a Flash hater — which I am not, I just don’t agree with the frequency of use and the typical implementation). The only real thing I got out of that was the verification that while some search engines can scan Flash, they don’t really index on it, and that you shouldn’t plan on Flash ever being indexed.

Craig and I met up for a bite to eat after the sessions. Still hung over from last night’s little fiasco, we decided that we absolutely needed to eat something before we went out for tonight’s little soiree: The Google Dance.

No, it wasn’t a dance per se. (Although there was dancing.) It’s a party — a big one. The name stems from something in the SEM industry called the "Google Dance". This is when Google updates its algorithms, usually about once a month. Sometimes, the effect is minimal, and it’s barely noticed. Other times, the changes are huge, as it was with a particular update known as "Florida". This succeeded in changing the long-standing results for thousands of websites, causing quite the ruckus. It seems very appropriate that the name of the party should be a play off the one thing that our industry actually fears from Google.

They supplied buses. Their office is a 20 minute drive on the freeways from downtown San Jose. (A cab ride would have been something expensive.) After powering back an appetizer plate and a couple of beers, we hopped in line with Brad, the creator and host of Search Engine Radio. Craig had met Brad at the Toronto conference and is a regular listener (Brad says that Craig is his only fan). I’d listen, but the timing is lousy for me, since it’s always when I’m in meetings.

Upon arriving, we were all handed t-shirts bearing the name of the party, and ventured on in. Google’s offices are at the old headquarters of SGI (Silicon Graphics). They’re slowly expanding into all the available space, but for now only occupy about half of it. The courtyard in the middle is where all the hubbub was taking place. 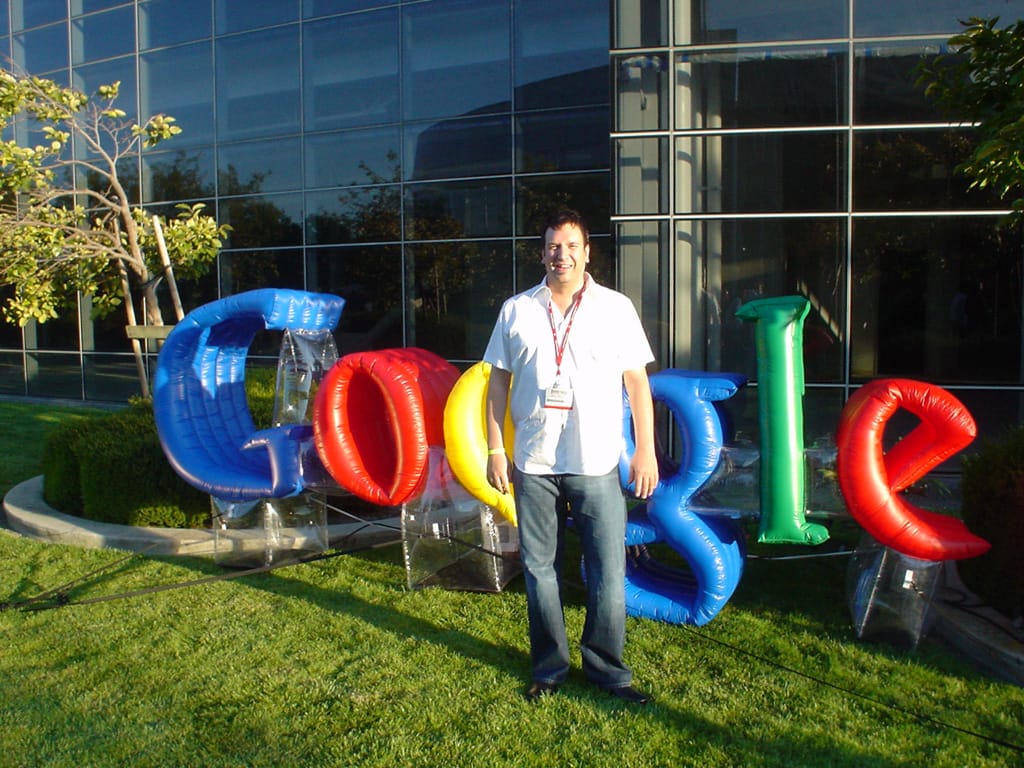 Like all of the other parties we’d experienced so far, this was free. Didn’t cost us a cent, outside of the flight and hotel. (Okay, that costs Critical Mass...) Quite a party, too. Free drinks, free food, a live band (Ozomati, whose music defies simply classification, but was exceptionally good), a live DJ, Ben and Jerry’s ice cream in INSANE quantities, giveaways, and demos of all their products.

Oh, and they tried to recruit new employees from the plethora of folk there.

Craig, Brad, and I wandered about a bit, seeing was there was, having some beers, talking with other people, eating, and generally taking advantage of the situation. (We joked about trying to break in and steal the algorthims, but we wouldn’t have even been able to get into the stairwells with all the security guards about.)

With all the people there, it wasn’t surprising that I eventually lost track of them and ran solo for a while. I ran into Nikki and Megan again, and chatted about our pasts, what we did for hobbies, and what we thought of Google’s impending IPO (officially announced tonight to be next Tuesday, 10 August).

There was a lot of head nodding between the three of us that this might be the start of the fall of Google. This was Google’s last hurrah as a private company. Next week, their staff will become millionaires overnight, there will be flashy, new cars in the driveways, and we’ll probably see a brief glimpse of the dot-com era for a while. But only a while.

Reality will set in again, and the pressure will be on Google to continually perform and produce. I’ll be surprised if this party happens again next year, particularly if it happens at the same level.

Google’s stock price will be the biggest question. It’s currently listed to start at USD$108. At that price, it’s well out of the range of most people, and only in the reach of investors. The biggest question is whether it will sell at that price, or if people will force it down. Undoubtedly, some will buy, and undoubtedly, the price will fall. It must — the dot-com era is over, and Google or not, the current reality can’t support a price like that.

Well, that’s what we think now. A week from now might prove otherwise.

The party started to quieten down when news spread that Google had run out of beer. When we heard it for the first time, the reaction was one of shock — how do you run out of beer? It’s like running out of water! Sure, there was still wine and some mixed stuff, but beer is the life blood! (Okay, yes, I’d only had two and wasn’t having any others, but that wasn’t the point!)

Nikki and Megan left about 21:30 or so. Nikki was tired, having been on her feet all day, and being five month’s pregnant doesn’t help. Megan, like the rest of us, was exhausted from last night’s alcohol-fueled marathon.

Craig had already left, having gone back to the hotel to rest. (I didn’t know for sure, but since I couldn’t find him...) I boarded a bus about 22:05, and was in my room by about 22:30. But I wasn’t exhausted, and decided to rest and relax a bit. Tomorrow’s another day of sessions and education.

And the Yahoo party.