After an exceptionally sound sleep, I awoke to get my day started. I had planned to start all my days with a workout (I’ve been slacking for the last little while, and need to get back into the habit), but ran out of room in my bag to bring my workout clothes.

I gave yoga a shot. If it weren’t for the slippery carpet, I might have done a better job (didn’t bring my yoga mat, either).

Craig and I met up in the Concierge Room on the 26th floor. Bacon, eggs, fruit, and a bit of juice. Far more than the muffins and pastries of the conference’s continental breakfast.

Following our morning meal, we headed down for registration. Didn’t take long — all we had to do was provide our names. That got us our name tags, and our bag o’ goodies. (Which actually contained a lot of useless stuff, too.) We spent some time trying to figure out which seminars we were going to, specifically trying to hit as many of the topics as we could. Not too easy, as there are at least four each period, and there are four periods a day.

I went to four sessions: Using Search for Market Research, Search Term Research & Targeting, Personalizing Search, and Search Detours. Search for Market Research was a good perspective change, if light on other content. I fell sleep during Search Term Research & Targeting. Craig had recommended it because it was a good introduction. However, I’m quite a ways past introductory level, so it was a tad dull. Having a long-standing beef with personalization, I wanted to see if the Personalizing Search had anything of value. It didn’t. Lots of talk about products, but no promise of effectiveness, nor any real content for marketers to handle the situation where the same query will generate different results for different people. It also didn’t help that the presenters weren’t the most interesting. The poorly-named Search Detours (most of the presenters renamed it Search Shortcuts). Like Personalization, it was very thin on content, and most of what was presented had no practical application from a marketing perspective.

Craig and I ducked out a bit early. We had some time before the Overture party, so went in search of some shopping. Craig was thinking of a new shirt, and I needed a swimsuit (guess what else I forgot).

Macy’s is supposed to be a great department store. You think I could find one swimsuit that was appropriate? They were all beach suits, and what ones I could find that weren’t too bad where all XL or XXL. Go figure. Luckily, a Copeland’s Sports store just outside in the mall had what I needed.

Returning to the hotel, we got ready for the Overture party, held at the bar in the Hilton next door. The party started at 18:30, and was pretty deserted when we arrived. Craig initially wanted to leave and come back, but before long, as swinging.

LookSmart staged what I can only call one of the most ballsy coups I’ve seen in a long time. They were running around, handing out cards for a party they were holding at a different location (not far away). I can only assume that Overture wasn’t particularly happy about that.

At the Overture party, I met Todd. Todd has a website that promotes Costa Rican destinations. I’m finding it quite interesting that there are so many people who know a lot about Costa Rica lately — it’s almost as if every person I meet has been there. It’s insane. But at the very least, I have yet another information source to use as Alex and I try to organize our vacation in January.

Craig bailed a little earlier than I for the LookSmart party; I followed soon after. The party was held at Pete Escovedo’s Latin & Jazz Club. LookSmart had booked the whole place to themselves, and you had to be with the conference to gain access.

It was a small venue, once a single-screen theatre. It’s now an intimate little club that features the music of Pete Escovedo, who is a Latin Jazz legend. (At least, that’s what the invite card says. I’ve never heard of the guy.) The music was hot, the environment lively, and drinks free. 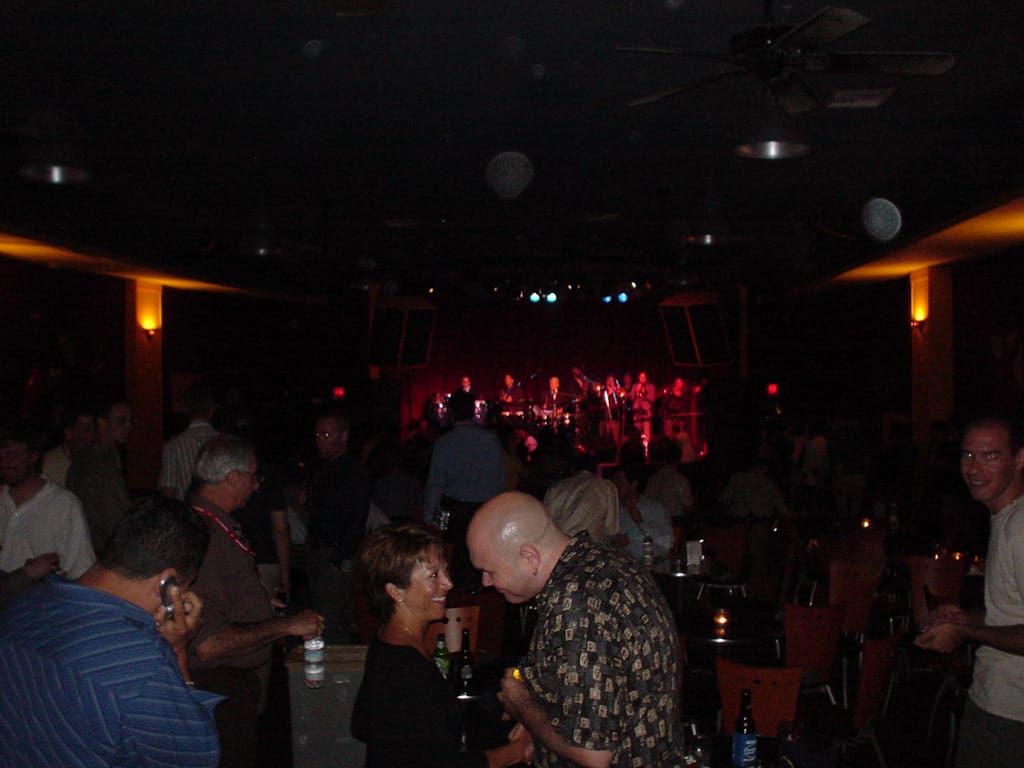 I was quickly introduced to Megan and Nikki, who work for Urchin Software. They’re up as exhibitors, and were enjoying themselves hanging out with the rest of the troublemakers. (Nikki is five month’s pregnant, so wasn’t enjoying herself as much as she probably wanted to.)

Craig then introduced me to gin and tonic, a drink I had formerly snubbed because I dislike the taske of tonic water. Instead, I found the drink exceptionally tasty, and realized why the British have taken such a liking to them.

This, it would seem, was my downfall. (As Craig later commented, it’s a bad sign when I suddenly, and very loudly, exclaim: "This is the best [expletive deleted] thing I’ve ever had!") I had started off with beer at Overture, and had switched to hard liquor. I don’t know how many I had, but it was too many. By at least five. When we finally headed back to the Marriott, I knew I’d had too much. The beer in the hotel bar finally did me in, and I had to leave Craig and Jill Whalen in the lounge and retreat to bed.

I was going to hurt the next day, and I wouldn’t be the only one...