We got up a bit later than I’d hoped for, mostly because I’d accidentally turned off the alarm instead of snoozing it.

We took the first train we could get to into Tokyo. I stood, wedged in a space between the door and the side of the bench, watching the scenery pass. At the time, I had thought this to be my last trip into Tokyo. Having been to Japan twice in two years, I can’t honestly imagine returning any time soon.

We switched to the Yamanote line after getting to Tokyo, then to the O-Edo subway line. We were going to Tsukiji market, and walking (though great exercise) was something I was trying to avoid. Jen was not feeling particularly genke (Japanese for "energetic" — if you hear a Japanese say: "genke deska", they are asking you how you are doing, it’s a common greeting that literally translated means "are you energetic"), and I didn’t want to make her walk too much.

Arriving at the market, Jen didn’t honestly believe that we were there. At first glance, it doesn’t look like a market at all. Near the main entrance, it’s trucks, forklifts, and countless styrofoam containers. It’s only once you get past the stall shops that you can see something that makes a little sense. But only when you’re in the fishmonger stalls inside the market building that you can really see it.

Sadly, by the time we got there, the market was closing down for the day. Most of the buyers and sellers were gone, the tuna long since vanished. Most of the stalls were vacant, showing no signs of any recent use. There simply wasn’t much to see.

We did a quick circuit of the inside, and left by the east entrance, passing by the south side of the Tsukiji outer market. We were in search of the Ginza area. Before leaving the apartment that morning, I’d decided that we needed to stop into the Sony building, and witness the newest in Sony consumer electronics. I had no idea if we’d see anything we hadn’t already seen in Akehabara, but it couldn’t hurt to look.

We were half-blindly wandering around. Only once did I look at a map, just to verify that we hadn’t, in fact, missed the correct road to find the Sony building.

In the process of wandering, we found two things we hadn’t really been searching for. The first was an ice cream cone (soft serve). That wasn’t unusual on it’s own, but the flavour was odd. Black in colour, we had assumed black sesame. However, it’s just as likely the flavour was squid ink, since we couldn’t place the taste at all.

The second was a teapot. One of our instructions was to find a cast iron teapot for Aunt Brenda. Not a particularly hard task, but we didn’t really know what we’d find when we looked. The one we eventually bought has a red patina of sorts, but one that you might almost miss in dimmer light. We hope it’s a good pot.

Downtown Tokyo is a strange place. Not all roads have names, some roads have more than one name, some roads seem to only have some sections named, or have different sections with different names. I was looking for Ginza 4-chome (one of eight major north-south roads running through Ginza), on which we’d find Sony. When we finally found the name of the road we were on, it was Ginza 5-chome.

We’d overshot our goal by a block. But as it turns out, this was a fortunate thing. As we reached the major east-west road in Ginza, we found the Apple store.

I know this doesn’t sound like much, but the Apple store opened to tremendous fanfare, with line-ups that had run, quite literally, for blocks. The line-ups were long gone, and it was time to take a bit of a gander.

The building is divided into five floors. The first is home and professional products, the second photographic needs, the third is an Internet cafe, the fourth a theatre, and the fifth various accessories and software. It’s a small store. So small that the only way to get between floors is by elevator. The elevators are totally automatic, running without having to press buttons for the floors at all.

We headed west to 4-chome, and turned north towards the railway tracks. A block away, we found the Sony building. It’s an unassuming place, particularly odd for a company with such influence and power in the entertainment and electronics industries.

From the first floor, spiralling up to the third, is a showroom of Sony products and technologies, broken only on a "floor between the first and second" that features a BMW "store". (It has a car in there. I have no idea how on earth they got a car in there. Maybe by taking out the windows, but that just doesn’t seem right.)

We started on the first floor (a massive video wall showcased a new product — a bipedal robot capable of standing back up if it falls over), then took an elevator to the third floor (we were a little apprehensive about going through the BMW store at first).

There was little in the store that we not had not seen before. About the only thing that I saw that truly impressed me was a remote control system built for use with the Sony WEGA plasma TV systems. It’s more than just a mere remote control, however. You can surf the web, find TV channels and video signals, "throw" them onto the big screen, or alternatively capture them back to the remote. It’s a pretty slick device, and I’m more than a little afraid to find out how much it costs.

We circled down, perusing the other wares, finding nothing else of real interest. Eventually, we exited back into the cooler outside air. We walked down to the Shimbashi JR station, about 3/4 of a kilometre from the Sony building. From there, a Yamanote train to Harajuku.

By this time, Jen’s unwellness had turned into a full migraine. She moved slowly, and deliberately. She barely had the energy to walk from the station, down Takeshita St. to Meiji-dori, and back. (Maybe a kilometre, all told.) We did stop into a couple of stores, and did have lunch at a restaurant that featured ton-katsu (breaded pork cutlets).

We headed back to Chiba and Yotsukaido. I tried to see if we could catch an NEX train — I’ve wanted to ride one for a long time — but we couldn’t get one that stopped at Chiba anytime soon. We had to take the Yamanote back to Tokyo station, and then a regular rapid Sobu train that went directly to Yotsukaido (saving us the additional train at Chiba).

Kaz was out with her friend and Chris was at work. Having no key, we had to stop in briefly at the school to pick up Chris’ key. We then hopped a bus back to the apartment, where we relaxed.

It was then that I made my decision. I wasn’t going to be denied seeing a fish auction at Tsukiji. I needed to see it. Not just because of sheer interest, but also because the present market won’t exist in a couple of years — it’s being replaced by a newer one elsewhere in Tokyo harbour. For me, it was a case of now or never.

This was a trip I would do alone. I knew Jen wouldn’t want to do the overnight in Tokyo, going without sleep, and wandering around in the market for at least a couple of hours. Although I wasn’t too keen on leaving her behind (alone, too, since neither Chris nor Kaz were home when I left), I headed to the bus just before 22:00, and caught the first train to downtown Tokyo.

This is my last trip into Tokyo for the foreseeable future. Unless there is a pressing need for me to return, I doubt I’ll be back for a number of years. I had thought about that fact this morning. But not on this trip in. Rather, I slept. Well, as much as I could, considering I was rather excited about being downtown, wandering around at will, effectively killing time until I could see something at Tsukiji.

The market officially opens around midnight, but things generally don’t start moving until about 2:00. The actual tuna auction isn’t until 5:20. And with train service ending at midnight, the only way I could see the auction was to do something until there was something worth seeing at Tsukiji.

This led me to the Shinagawa station, courtesy of the Yamanote line. There, I took a couple pictures on the platform (streams of late-running salarymen heading in the direction of home), then headed out the exit into the night air. My rail pass has expired, it will serve no more purpose. Tonight, I am on my own. 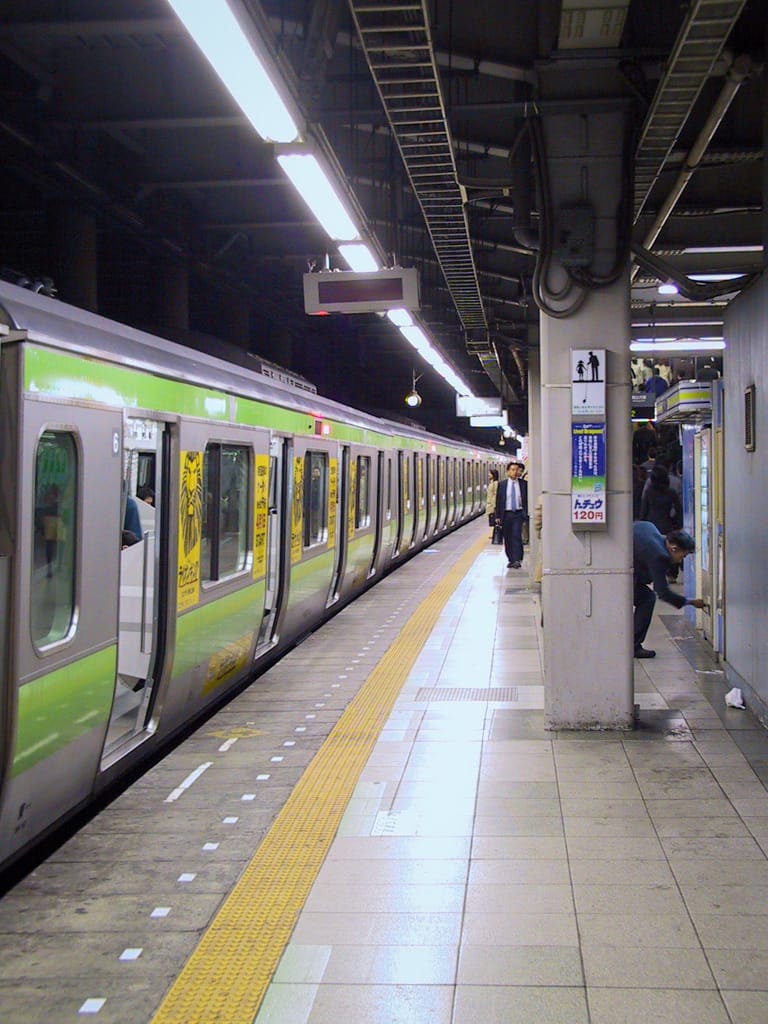