We were up a little earlier than the previous few days, so we could catch a good train out to Kamakura, our excursion for the day.

Kamakura is a small town south of Tokyo, about an hour and three-quarters away from Yotsukaido. From 1192 to 1333, Kamakura was the feudal capital of Japan. There are no signs of its previous governmental past today, but the marks of its present status as a religious centre are very clear. The area is peppered with no less than 84 shrines and temples. Less than Kyoto, but Kamakura is a much smaller area.

We had outstanding timing this morning, arriving at the Yotsukaido station mere moments before the train to Zushi arrived. The Zushi train comes only once an hour. It comes from Narita Airport, and runs the full length of the Sobu / Yokosuka line. Had we not caught the Zushi train, we’d have had to take a local to Chiba and change there for a Zushi train.

Originally, I thought we’d have to change trains at Zushi and take a local to Kamakura. But as luck would have it, the map I’d looked at wasn’t particularly clear, and we could take that train all the way to Kamakura without changing once.

We had to stand all the way into Tokyo before we could sit down for the rest of the trip. Jen snoozed, even I caught a few minutes of additional sleep. We got off at the small station of Kita-Kamakura, which the guide book recommended as the starting point for the walk.

First on the list was the Engakuji Temple. A facinating little walk, the temple was considered second among the five great zen temples of Kamakura. Accented by stands of cherry trees, the grounds even featured a new building under construction. Unfortunately, we couldn’t get close enough to see what it looked like.

We walked from there down to Kenchoji Temple. First among the five great temples, this was a temple I did on my own. Jen had her fill of temples after the second one, and decided that she wasn’t visiting any more without good reason. While I was at first very disappointed to hear that, I could certainly understand her perspective. I remember thinking that there were far too many churches and cathedrals when I was in the Soviet Union.

The approach to the temple was lined with cherry trees, and the interior was laid out with a zen perfection that we had not seen before. I almost found it quite annoying that I could not wander around a while longer and find more things to see. Such as it was, however, I didn’t want to keep Jen waiting too long. 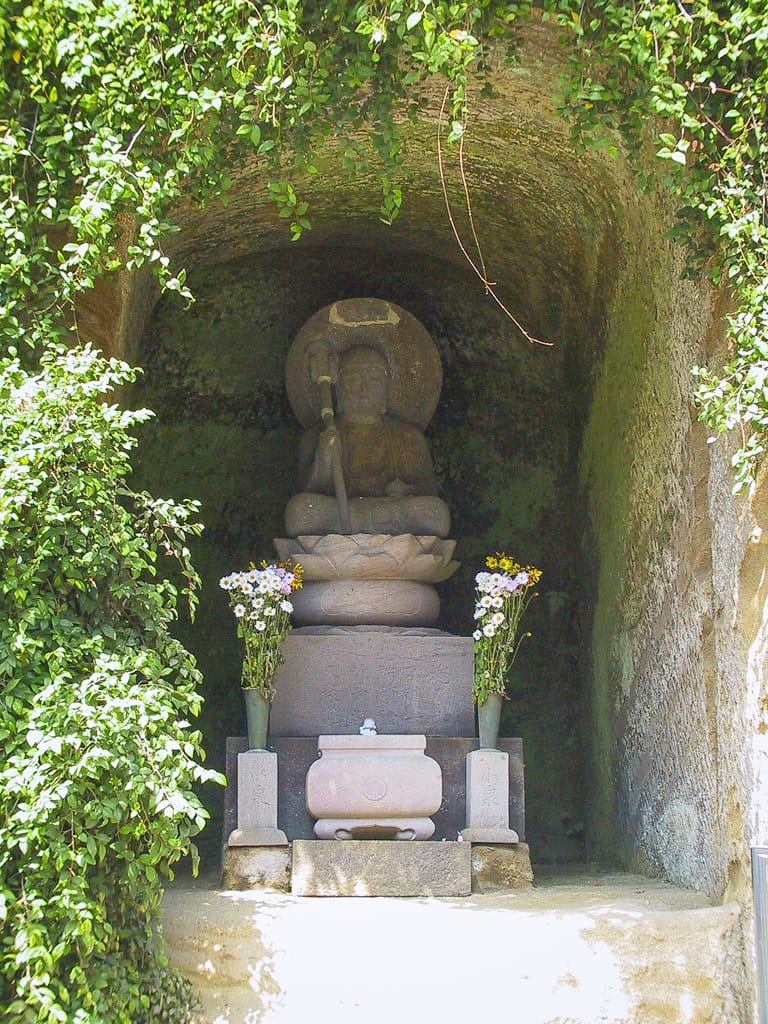 I know that Jen was a little tired of all this wandering around small towns, seeing the same shrine over and over again. But the point of travelling is to see the country you’re in. And that’s hard to do when you don’t want to see it. It’s even more hard when one of you wants to see it, and the other does not. I promised to avoid any more temples unless they were really interesting, until we got to the Great Buddha.

I managed to keep us walking, eventually reaching the main downtown of Kamakura. The main road through downtown has a cherry tree-lined walkway down the middle, dividing the two lanes of traffic. I can only imagine how wonderful it must look like at night.

We arrived at the Kamakura station. There, we took the Enoden Line to Hase, on a small, old single-tracked tram line. This brought us much closer to the Great Buddha, saving us a bit of a walk. Although it is nice to have nice, warm weather, walking around in at least 20 degree weather gets a little uncomfortable after a while. 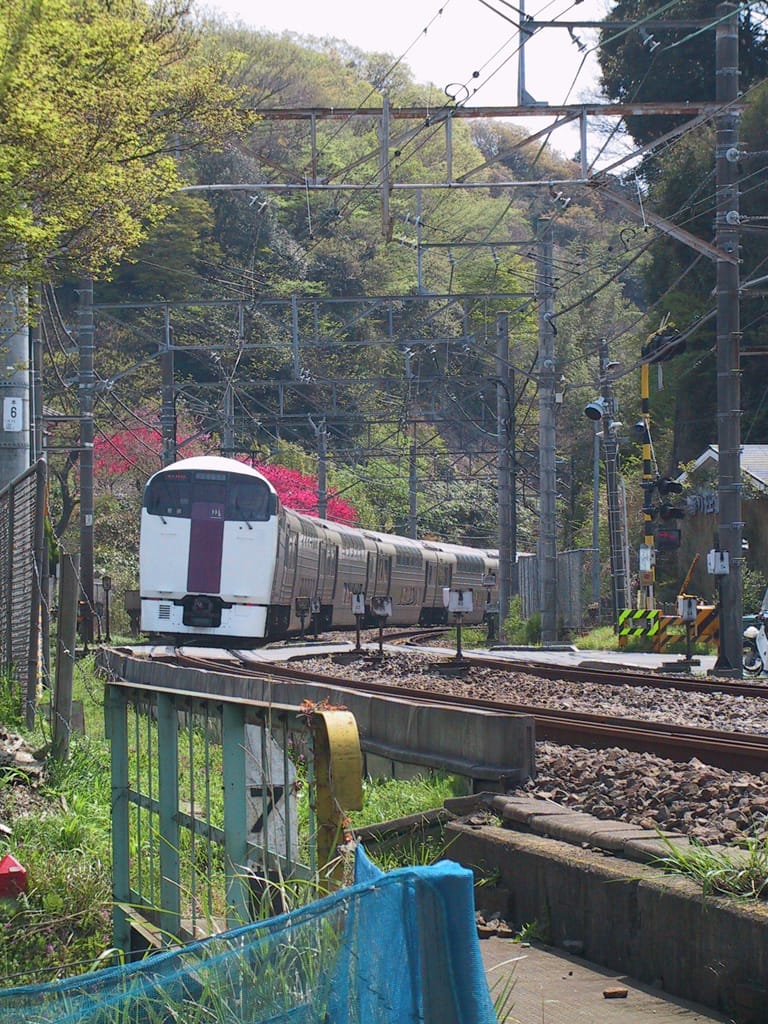 The walk up to the Kotokuin Temple (home of the Great Buddha) was nice, marked with a few shops and restaurants. Prices for similar items climbed the closer you got to the Buddha, of course. We perused a bit as we climbed. 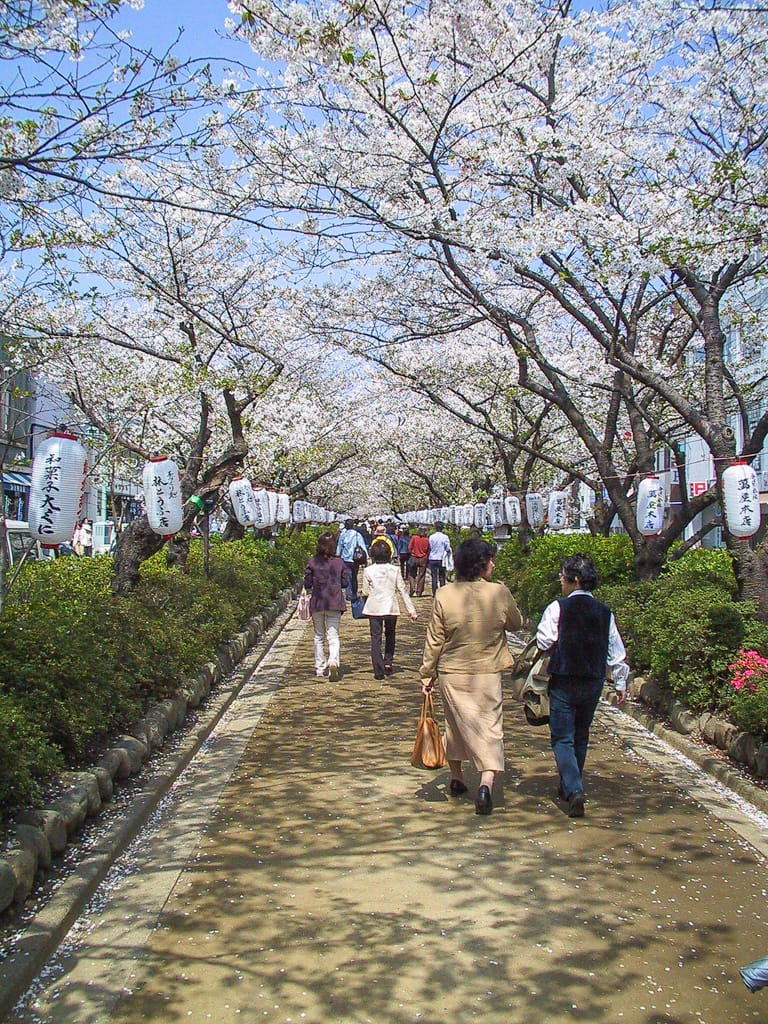 The Great Buddha was created in 1252 by sculptors Ono-Goroemon and Tanji-Hisatomo. This massive structure was cast in bronze (in several large sections) and housed in a massive temple. In 1498, a massive tsunami reached the heights of Kotokuin temple, destroying the wooden structures but leaving the 13.35 metre-tall, 121 ton structure intact. Since the tsunami, the statue has been exposed directly to the elements. 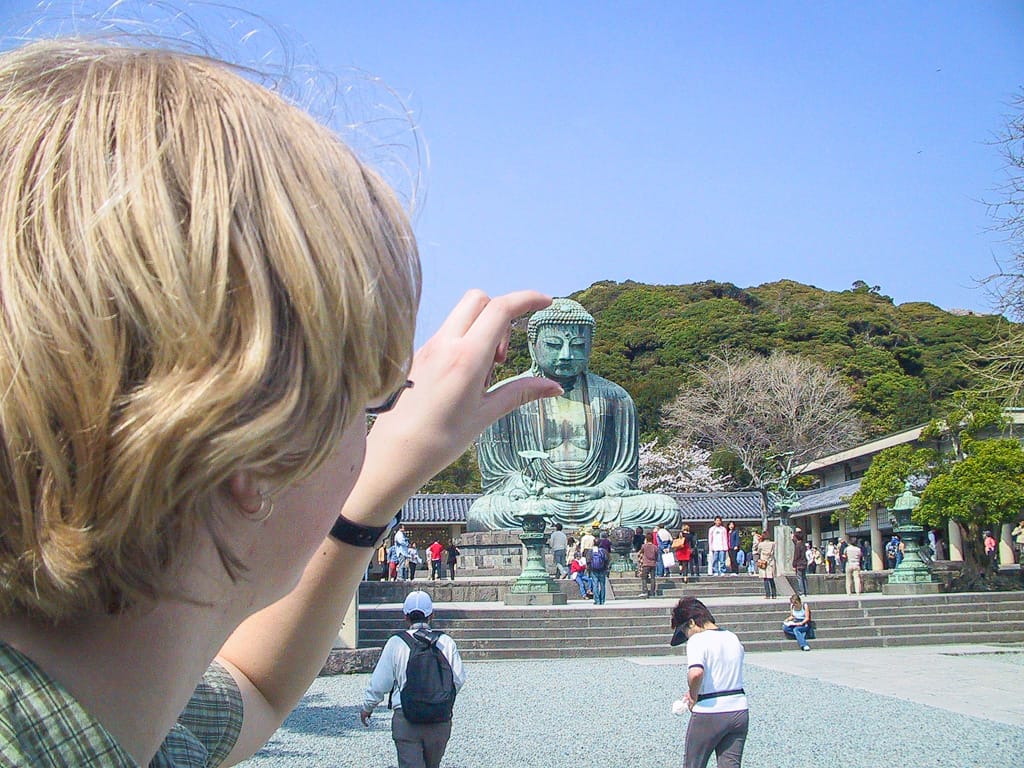 It is an impressive structure. Despite its massive size (and weight), the statue doesn’t really look all that large. It’s an impressive design that takes something so large and make it seem a little more inviting. Its peaceful stance (in the traditional buddha sitting pose) brings on similar feelings in those who visit it. It’s with no surprise that the Great Buddha is one of the main attractions at Kamakura. 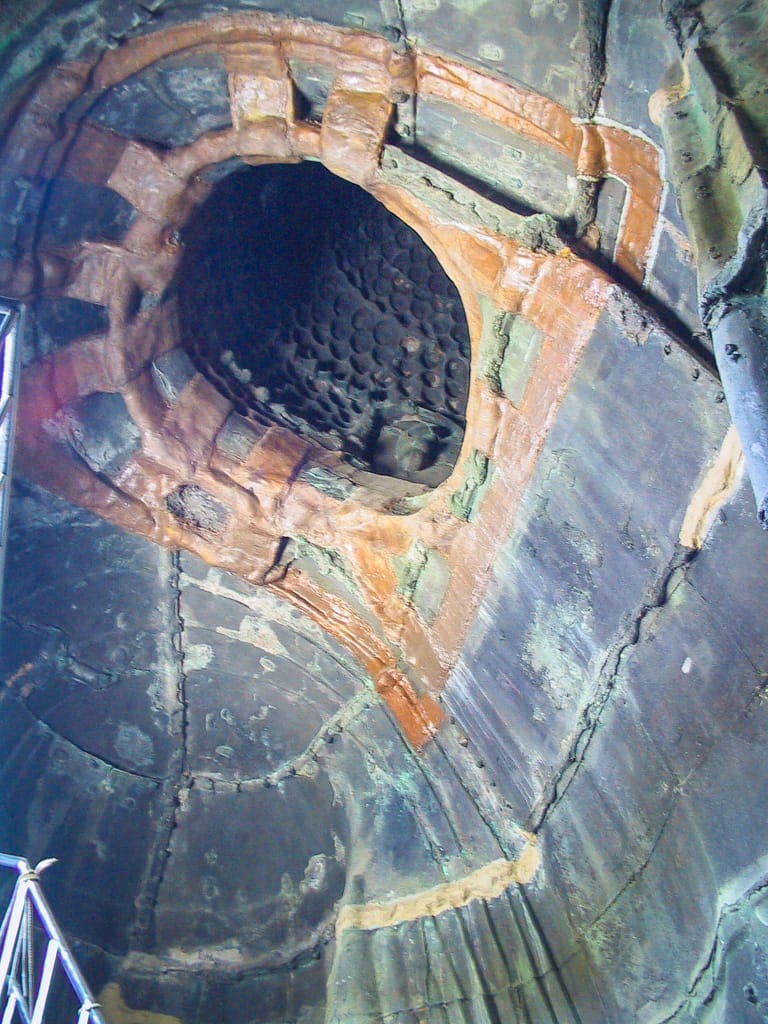 Having taken in the grandeur of the Buddha, we headed back towards the Hase tram station to return to Kamakura station. But instead of taking the tram, we opted to walk the 1.7 km (this was Jen’s suggestion, not mine). We had half-thought that we might be able to find something to eat along the way. Much to our surprise, most of the stores and restaurants appeared to be closed. It seemed completely contrary to normal logic for a tourist-rich location.

Finally, we reached a short pedestrian mall that led us down to the Kamakura JR station. After getting a quick snack at a food stand of sorts, we caught the first Narita Airport-bound train. That would take us all the way back to Yotsukaido without having to change trains.

We left Kamakura at 15:18, and arrived in Yotsukaido at 17:00. That left us plenty of time to hit the toy store near the station. We’d gone in very briefly last night before coming home, but had to leave early because the store was closing. This time, we had plenty of time to peruse.

Perhaps too much time. As we came out of the store, the bus we needed to catch pulled away. And following with the completely inconsistent nature of the bus schedule, the next wouldn’t appear for almost an hour and a half.

So we walked back to the apartment.

Mind you, we had no real way of knowing whether or not Kaz was actually home. We had tried to get a hold of her a couple of times, but with no answer, we didn’t know if she was actually home. As it stands, she had only come home not long before we arrived, as a convenient happenstance. She had been out with her friend, who would be spending the night with us.

Kaz was very kind to make us dinner, flavoured pasta. Kaz and her friend watched a "Friends" DVD (a show that I cannot particularly stand) translated in to Japanese. I sat and wrote my journals, while Jen watched, waiting until she could get access to the Playstation to continue playing "Devil May Cry 2".

Finally, just after 23:00, Chris appeared for the first time since Sunday. We won’t get much time with him today, so hopefully, we’ll make the most of it now, so we can have some time before we leave for home.