The alarm went off early. Earlier than usual, anyway. Jen was still sleeping, so I thought I’d let her sleep a bit longer. But at 9:00, I got her going.

Unforunately, Jen started off with a killer headache, so she didn’t move very quickly. Compound to that a very irregular bus schedule and not being able to catch a limited express to Tokyo wound up pretty much killing the point of today’s journey — going to Nikko.

Nikko is about 50 minutes north of Tokyo by shinkansen. We neeed to get to Nikko in enough time to look around, and still get back at a reasonable hour. Problem: the first shinkansen was at 13:16, which would get us to Nikko (including the time on the local train) at almost 15:00, far too late to be useful for us.

Instead, I thought a different plan might be in order: a tour of Tokyo. So off on the Yamanote line to Hammamatsucho to catch one of the Hato Bus tours. This is the same thing Chris and I did last year, and I thought that the commentary might be better for Jen than me trying to explain things as we either walked too much or whizzed by on the train (on which Jen loves to sleep).

Initially, Jen wasn’t too keen on doing it, but with a little encouragement (and me paying the fare), things were arranged. I am slowly starting to have issues with motivation. Jen really wanted to come to Japan, but in the last few days, I’m having trouble getting her to want to go out and do things. Sometimes, I think all she wants to do is sit back and play video games at Chris and Kaz’s. And I really hate having to say things like: "you didn’t come to Japan to play video games". I’m hoping this is just because of Jen’s headache today.

Also different were the guides. The guide for our bus was missing at the time the tour started, so one of the guides had to take our group in addition to his. The way this guy talked reminded me of Mr. Chen from "Big Trouble in Little China" with his odd humour and speaking manner. 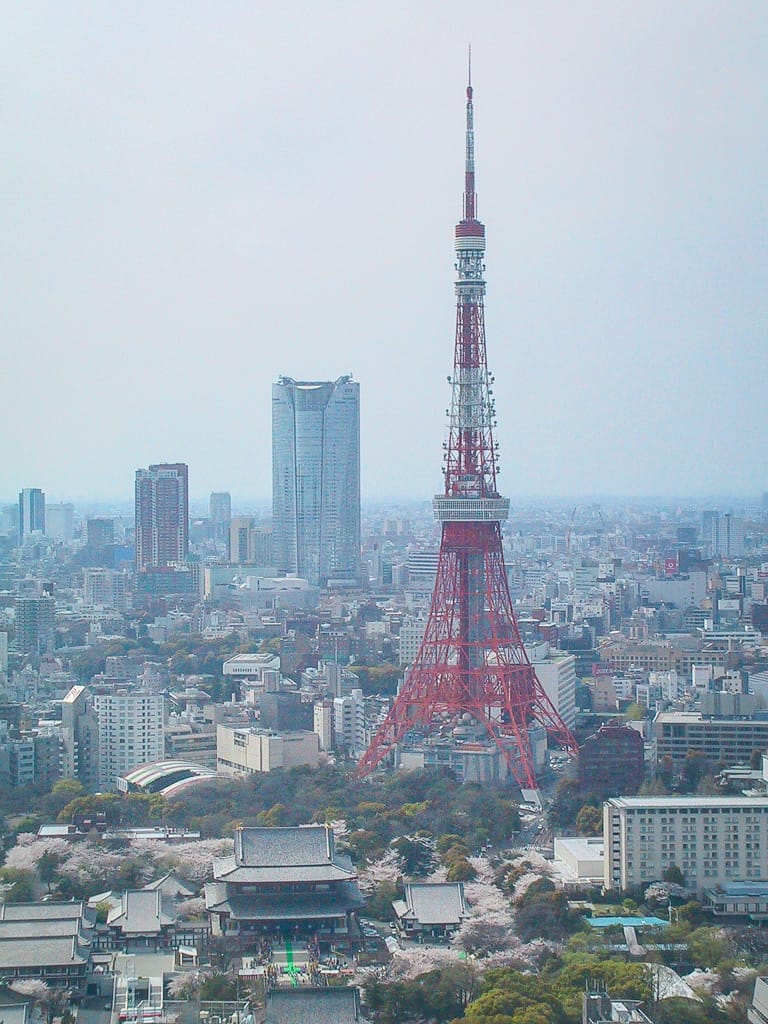 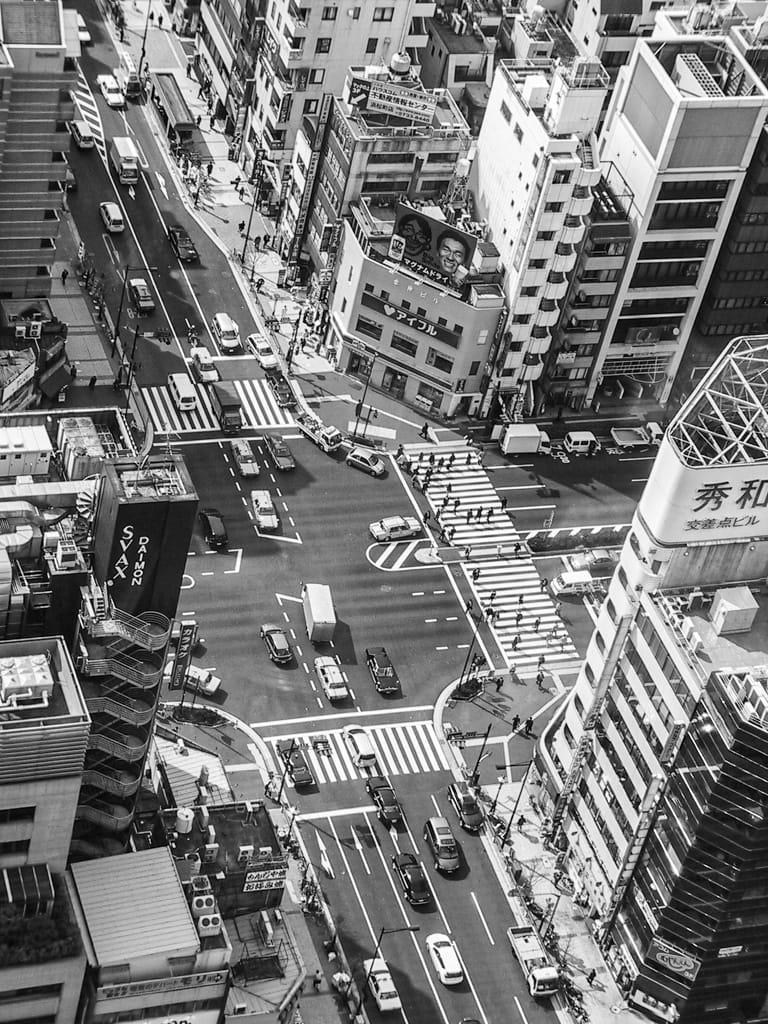 Tokyo was hazy again, so we couldn’t see too far. No chance of seeing Mt. Fuji from the top. Soon, we were back down at the bottom and on our way to the bus. There we met our tour guide, Rika.

Rika knew English quite well, but had an odd speaking manner. Unlike most people speaking English, Rika’s annunciation sounded like the earlier generations of computer synthesized speech: choppy construction, inflection in the wrong parts of the speech, and the odd bit of mispronounciation. Otherwise, her English was inpeccable. (Except when she tried to tell us that people hang out their clothes to "disinfect" rather than "dry".)

The tour was busy. There were at least five groups running through at the time, including ours. One particular group appeared to be school kids from the United States. We weren’t sure if they were there on some kind of field trip or on an exchange. They were a bit annoying. Like how gnats are annoying. Luckily, they weren’t with us.

Our bus was thankfully light on the load, and all adults. We had a multicultural group, with people from the United States (both coasts), Switzerland, Sweden, Argentina, Mexico, and Peru.

We stopped at a different part of the Imperial Palace Plaza than last year, which was the uninteresting part. The double bridge entrance has more to see, the side next to the East Gardens is kinda dull. 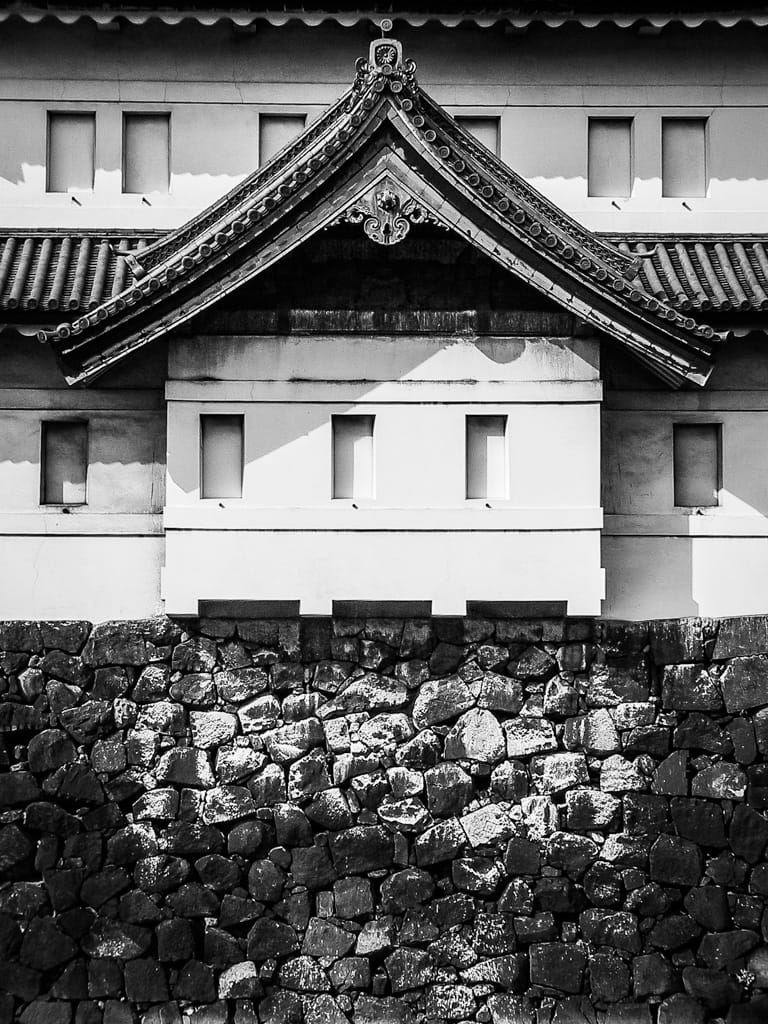 Off to Asakusa and the Nakamise shopping arcade. Last year, this wasn’t a huge issue. This year, I think every tour bus in Tokyo had delivered people there, in addition to the countless regular tourists. "Crowded" is an understatement.

Trying to follow Rika proved to be a problem, not just because she was shorter than the average crowd height, but trying to get through the throngs of people proved to be a challenge. Even having to elbow our way through everyone, we finally arrived at the temple mostly intact as a group. Everyone else who didn’t join the group were out in the shopping arcade.

Rika gave us the quick tour of the temple, how it was built and how it worked. Then we were cast to the winds for 25 minutes, at which time we needed to be at the boat dock. Jen and I started down towards the arcade, but just barely outside of the actual temple grounds, we were sidetracked by the smell of fried noodles and chicken yakatori. Both of us were hungry enough that we sat down for a quick meal. 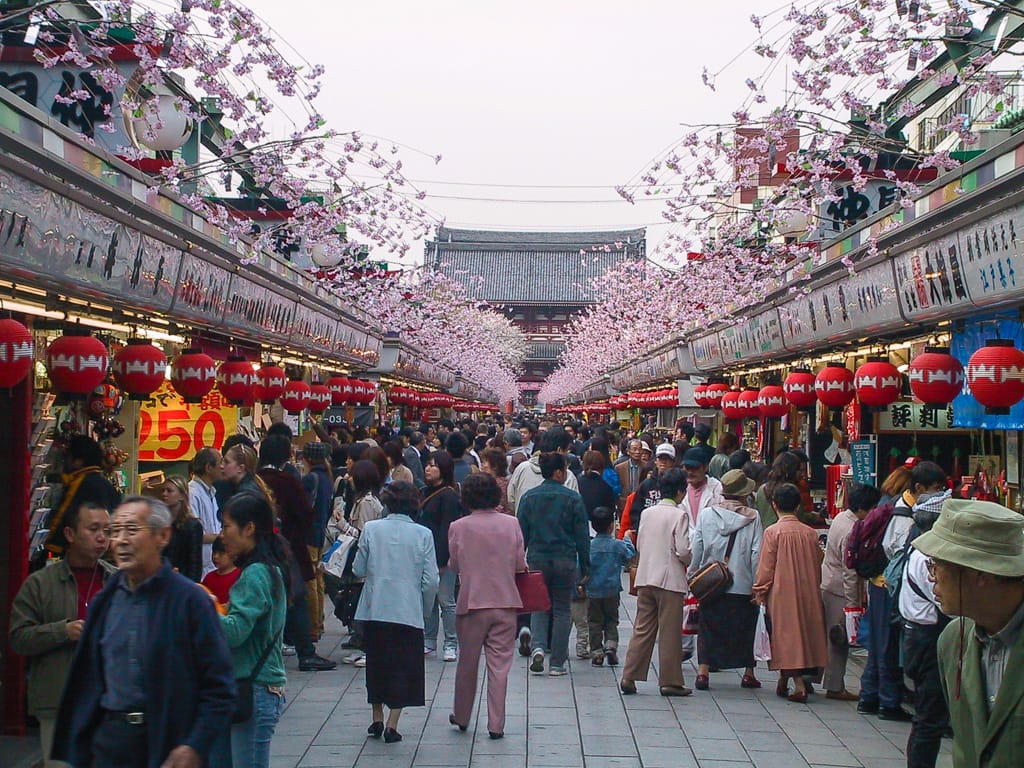 Then it was a quick walk down the arcade, bypassing all the stores, almost running the last little bit to the boat dock. The boat trip down the Sumida River was the same one we did last year, so there really wasn’t much new for me. The fact that the cruise was also full of people certainly didn’t make the cruise particularly exciting. We just enjoyed a lazy trip down the river, periodically taking a bit of chop as a result of the incoming tide.

We arrived at the Himeda Pier, hopped the bus, and headed back to Hammamatsucho. Once there, Jen and I headed back to Tokyo and then onto Chiba. Along the way, Kaz and I exchanged messages, discussing possibilities for dinner. Chris was still at work, we wouldn’t see him again for a while, so it was just us for a while.

We tried to get on an NEX at Tokyo, but without success. Although our passes supposedly work on the NEX, we couldn’t get on the train because there didn’t seem to be any cars with unreserved seats. We got on a regular rapid train instead.

We met up with Kaz at Chiba station, and headed off in search of the 100 Yen store, just above Yodobashi Camera. Jen had thought of finding some things there to take back for friends and family. But Jen disappeared almost as soon as I rounded a corner. I found her in the toy store next to the 100 yen plaza.

She’d found a hoodie for Full Metal Alchemist. To say she was excited was putting it mildly. So excited that I actually couldn’t resist buying it for her. Mostly because she couldn’t afford to buy it for herself.

Purchases in hand, we headed off in search of dinner, specifically sushi. It didn’t take much to direct them to the sushi restaurant under the railway tracks. Yep — the same one I went to the first night I was in Japan a year ago. The three of us picked off what we wanted as it came around on the conveyor, supplementing with a couple of ordered items, such as shrimp tempura, singed salmon, and Jen had a huge bowl of miso soup.

Completely full, we rolled out and headed back to Yotsukaido. It turns out Chris was unable to join us tonight — he’s back at his old place packing up the remainder of his things. Hopefully, we’ll see him tomorrow night.