We attempted to move a bit quicker this morning. The key word being "attempted".

The idea was to go to Osaka and do the touring thing. That meant we had to leave at a reasonable time so we could catch the various trains (subway, shinkansen, local, loop, and subway, in that order) to get from our hotel to the Osaka Aquarium, our first destination of the day.

The problem was that Jen’s stomach was beginning to rebel. It doesn’t appreciate the Japanese diet the same way mine does. Mind you, mine’s been tempered with age, and isn’t wholly dependant on low-fat, unsweetened milk (which Jen’s seems to be). So the lack of milk and high fish content (which Jen’s not a particular fan of) really didn’t create an ideal situation.

So we were a little later leaving than I had planned.

We arrived at the aquarium about five minutes ahead of my prediction (noon), despite all the trains and transfers we’d had to take. Overall, not such a bad thing. Why were we going to an aquarium on the opposite side of the planet? Simply put: because Osaka Aquarium is one of the largest in the world, and features a whale shark, which I’ve never seen.

Jen got screwed on the entrance fee. According to their fee schedule, she is still a child, which meant a mere 900 yen fee (rather than the 2000 yen adult fee). However, even armed with her passport (as proof of age), the clerks simply didn’t believe that she was 15. If only we had those guys from the izakaya for assistance.

We headed into the aquarium, going up a long escalator into the main building’s 7th floor, where we were introduced to the Japan Forest, at the heart of the building. This started us on a slow spiral all the way down to the 4th floor, taking us through the Aleutian Islands, Monterey Bay, Gulf of Panama, Ecuadorian Rain Forest, Antarctica, Tasman Sea, Great Barrier Reef, Pacific Ocean, Seto Inland Sea, Kelp Forest, Coast of Chile, Cook Strait, and the Japan Deeps.

Each portion of the trip represented one part of the Ring of Fire, of which Japan is part. (The Ring of Fire is a geological name for the ring around the Pacific Ocean, characterized by tectonic and volcanic activity.) It also is arranged in a way that is supposed to representative of the Gaia theory, which states the world is in fact a living organism from which the life we see sprouts, and returns to upon death.

At the top, the aquarium is interesting, but not particularly thrilling. Monterey Bay was a bit of a laugh, having been to Monterey myself and having seen the Monterey Bay Aquarium (which I would quite willingly put on the same scale as the Osaka Aquarium for size and quality). As you spiral down, you’re given a deeper look into some parts, and completely exposed to others for the first time.

At the core of the aquarium is the Pacific Ocean exhibit. This massive tank, sealed in by 30cm-thick acrylic walls, contains 5,400 tons of water and a huge number of aquatic species, including tuna, sun fish, manta rays, oscars, a couple kinds of sharks, especially the whale shark (a species that grows to 12m in length; this one was only about 6m). 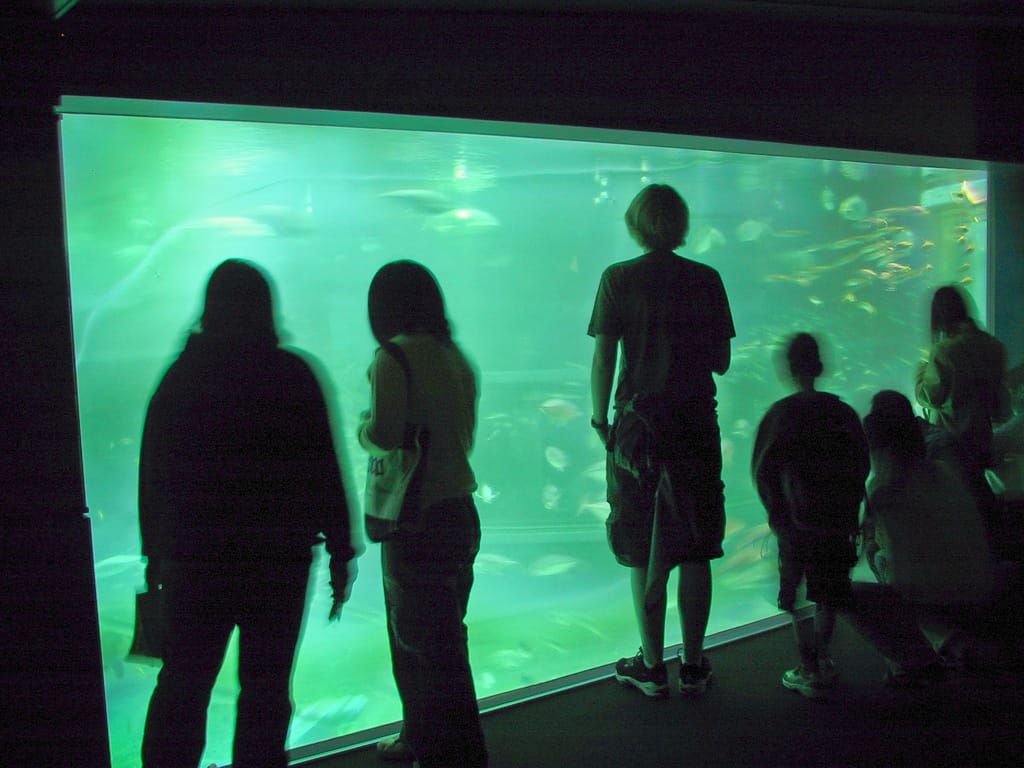 We were treated to many different views from several different levels of all the environments, before finally reaching the Japan Deeps, a small, dark tank with the largest, most creepy-looking crabs you’ve ever seen. It was like something out of "Alien". Down an escalator, and we were at the jellyfish. We heard a lot of "kawaii" (Japanese for "how cute!"). 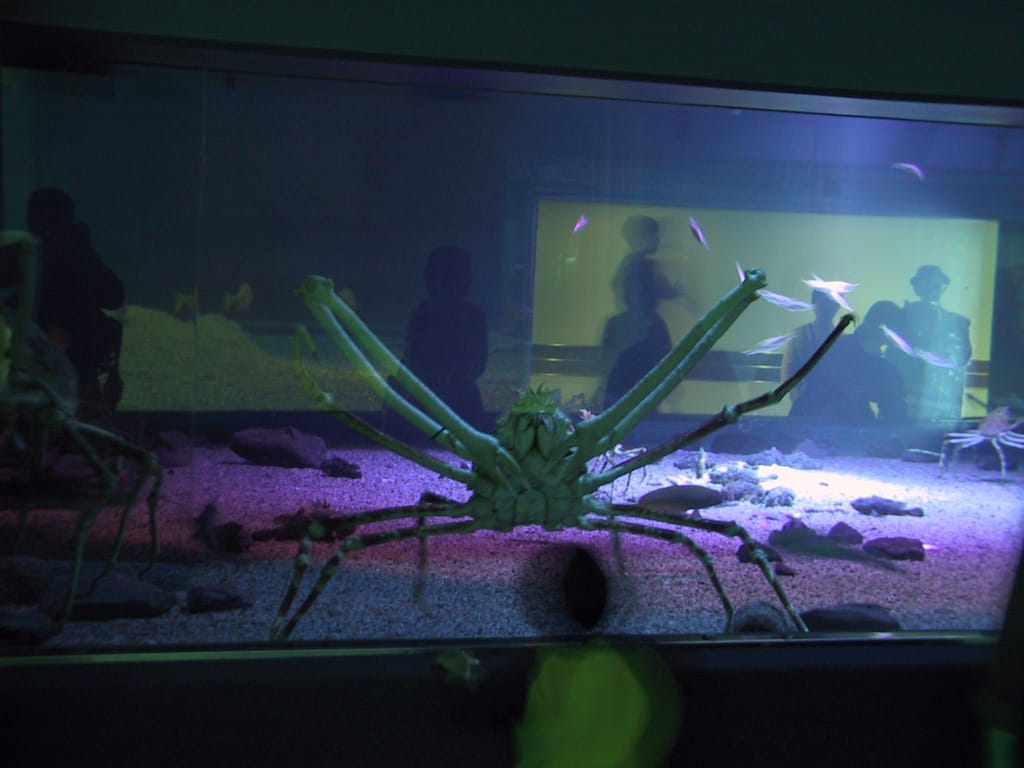 Leaving the aquarium, we headed over to the Tempozan Marketplace for food and shopping. The latter was scarce, but the former wasn’t hard to find in good quantity. Jen inhaled not only her lunch, but half of mine (I wasn’t keen on eating all the rice) and was still hungry. Apparently, the sauce is the key.

After calling a draw on a seriously insane air hockey game, featuring two paddles per player and three pucks at any given time, we decided to give the Tempozan Giant Ferris Wheel a whirl. This is apparently the world’s largest giant ferris where (as opposed to the world’s largest miniature ferris wheel, I can only suppose), and runs to a height of about 100m. The view from up there is quite something. 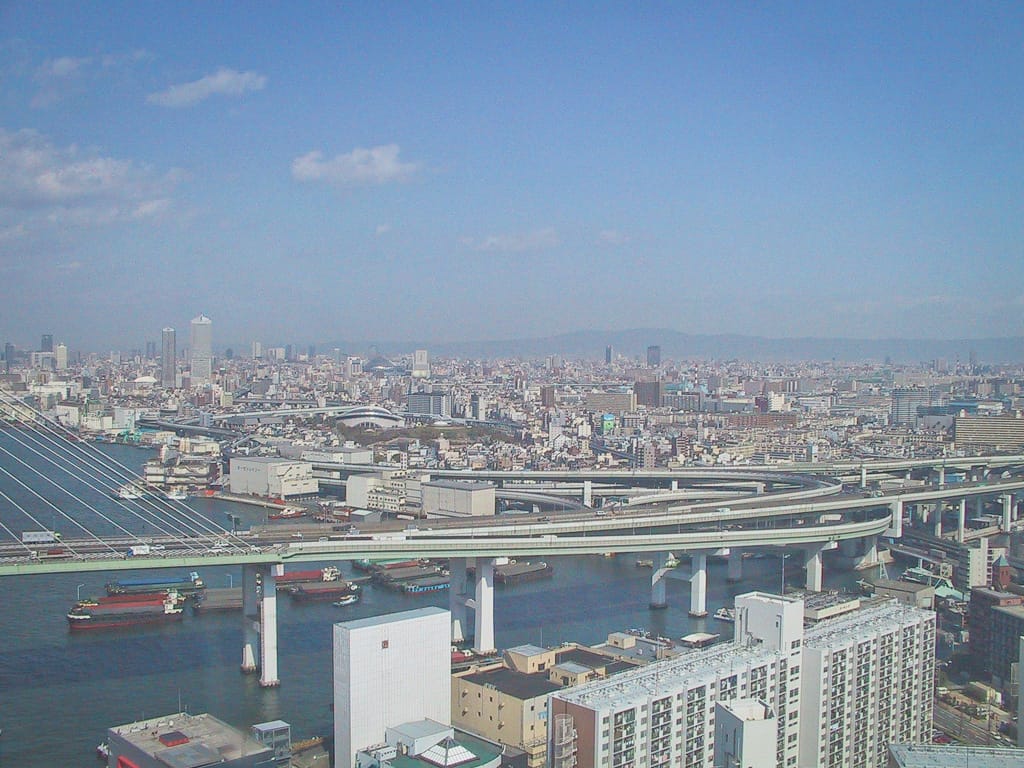 We headed back to the JR Loop line (via subway) and hopped over to the other side of the city to check out Osaka Castle. This structure dates back to the 16th century, when it was built by Toyotomi Hideyoshi (a warlord who unified Japan) as his stronghold showpiece. After he died, his forces lost to the Tokugawa Shogunate, and it became a Shogun’s residence until the capital was moved to Edo (now Tokyo). The main building was destroyed by fire in the 17th century and left abandoned until the 20th century, when Osaka chose to rebuild the tower and reopen the castle for all to see. The existing structure is now concrete (hence not original), but the appearance is believed to be correct.

The JR Loop line stops right at the castle grounds. However, it is not a short walk. It’s well over a kilometre to reach the tower itself. But it’s a walk work taking, since the view from there is quite good, and the tower itself is very beautiful (not as nice, perhaps, as Himeji Castle supposedly is, but I won’t be seeing that on this trip). 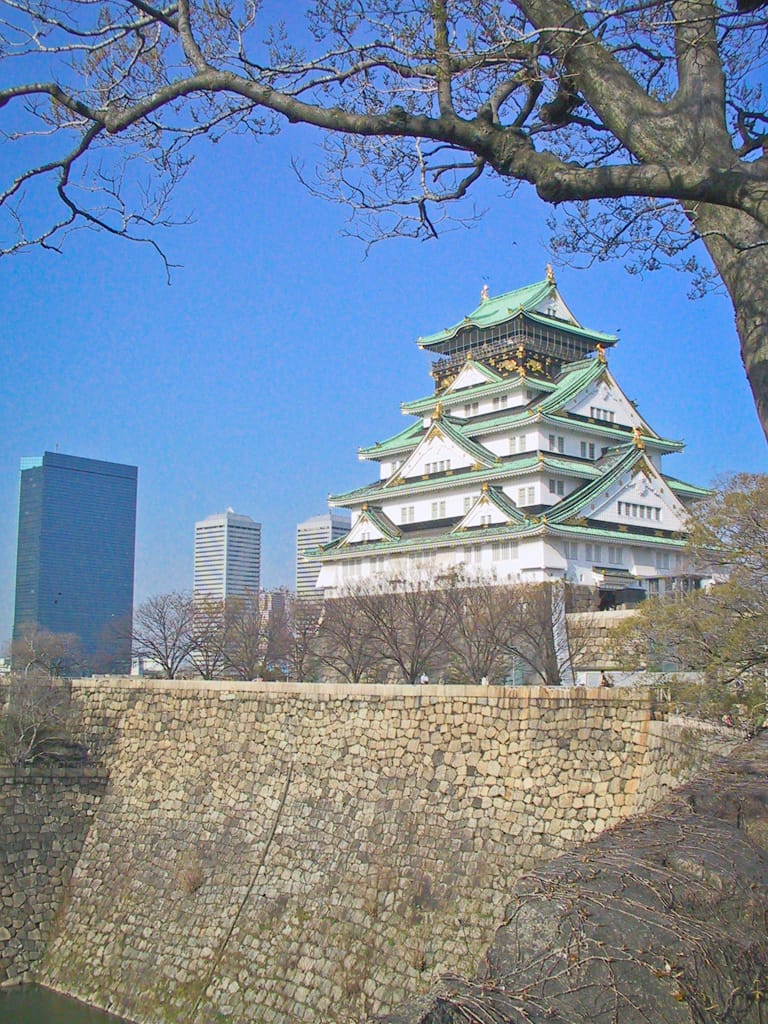 We returned to the train to try some shopping. I had hoped to go to Dotombori, one of the major shopping and food districts in Osaka, but Jen’s energy level was so low (and we’d spent a lot of money over the last couple of days in various bits of non-JR transportation) that even considering going there was not really much of a consideration. Something else that will have to wait for the next time I come this way, I suppose.

We ended up hitting part of Kita, a shopping area next to Osaka Station. There wasn’t much there. We thought of doing dinner, but due to a miscommunication, it wasn’t dinner that was of interest, but was just a thought. So it was back to Kyoto.

We ate at Kyoto Station, partaking of gyoza (for Jen) and ramen (for myself) at one of the ramen shops on the 10th floor. (The station is big.) Following dinner, we headed back to the hotel. Jen really wanted to rest and draw. Being so early, I went back out.

I walked down Kurasame St. to the Kyoto Tower, a rather unassuming edifice just north of Kyoto Station. It’s not particularly tall, but offered a decent view of downtown at night (although unlike the World Trade Center at Hamamatsucho in Tokyo, the interior lights are far too bright), and of the lights out at Kiyomizudera Shrine (which look very nice at night).

I walked around the station again afterwards, taking some more pictures (but at night) before heading back to the hotel. 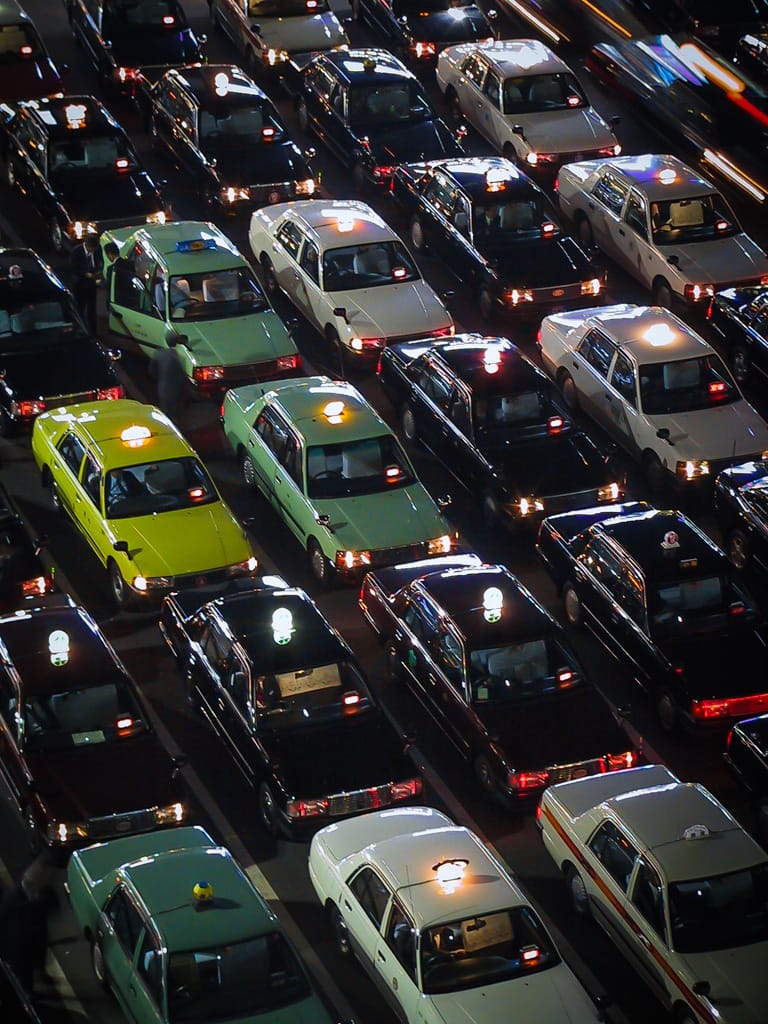 On my way back, I popped into the Family Mart (a convenience store) to grab a snack. That’s when it hit me — I should find some milk for Jen. She’s desperately needed milk for a couple of days now, and most of the stuff we find just doesn’t cut the mustard. But at the Family Mart, I found something that apparently will do for now.

The whole milk thing is just one of a few things that have not been ideal. Don’t get me wrong, I’m not complaining. Just that travelling with Jen has, at times, been a bit more of a challenge than I would have hoped for. We’ve had to cut short some things because, somehow, this 31 year-old can out pace his 15 year-old cousin. Osaka was a good example of this. I just hope that the milk we’ve found helps restore her energy so we can handle things like Nikko, Kamakura, and the various Tokyo excursions.