Today, we experienced what can only be the most terrifying thing I’ve ever experienced. The earthquake hit around 7:30, and shook the entire room. Jen and I leapt from bed, and I dragged her into one of the doorways — supposedly the safest place to be during an earthquake. The rumbling continued for a good 30 seconds (not that I was timing, but it was certainly a long shake) before things settled down a bit. I don’t know how often Kyoto gets an earthquake, but apparently even our modest little ryokan can handle the stress.

April fool! Had you going, didn’t I? No, there wasn’t an earthquake. Quite the opposite, actually. It would have taken an earthquake to get Jen out of bed.

Breakfast showed up at the regular time, which was still far too early for Jen. She was quite tired with the events of the last couple of days, and certainly with all the hiking we did yesterday. Add to that the prospect of fish, tofu, and non-western foods for the first meal of the day really didn’t jump start her any. Still she did her best to try and eat the things put before her.

However, Jen was so tired that she practically begged to go back to sleep. I remembered (if only vaguely) what it was like to be 15, travelling abroad, and always being tired. So I let her go back to sleep, and took the opportunity to go wandering to yet more temples, specifically the Higashi Honganji Shrine, located about two blocks north of the JR Kyoto Station.

I walked from the hotel, partly to kill time, but also so I could see what else was on the way down from the hotel. It’s a bit of a hike, and I wasn’t in any huge rush. There wasn’t much to see, outside of watching people, so I was content to speed my arrival at the temple.

It’s an old temple, originally built in 1602 (it’s a split from the Nishi Honganji temple, which is about a kilometre to the west). The temple was rebuilt in 1895, during the Meiji Reformation, and those buildings are the ones we see today. Among the massive structures is the largest single wooden structure in the world, the Founder’s Hall. It’s size is hard to put into words, other than "massive". The amount of time, effort, skill, and lives it took to build something of this size is just mind-boggling. The details are intricate, and the layout gorgeous. I just wish I could have seen a service here.

Continuing south, I arrived at the JR Kyoto Station. I took a quick detour over to the Kyoto Central Post Office, partly so I could mail some postcards home, but also so I could get some more money from my bank account. I love the post office in Japan — it just makes so much sense.

The JR Kyoto Station building is immense. It’s really hard to understand just how large this thing is until you’re standing in it. The main area is a concourse for passengers and some shops. A few restaurants and food stands are in a space on the second level, set towards the northern end of the main area. From the main floor all the way up to the ceiling (about 11 floors up) is open space. Huge amounts of open space. It’s enough to make an agoraphobic freak out.

I snapped pictures from the south side of the main space, riding up several flights of the escalator to get the right angle. At the top, I took the Sky Walk (a bridge running under the ceiling out to the north side of the main space). I could feel my knees beginning to quake as I reached the top of the esclator (I have a mild fear of unsafe heights that I regularly try to challenge). But the Sky Walk is so strongly built that there is no real way to see how far down it is.

Finally prying myself away from the architecture of the station building, I returned to awaken Jen from her slumber. Awake barely 20 minutes, I had timed my return quite well. It was time for the adventure of the day: Mt. Hiei.

The northeast corner of Kyoto has been known as the "Devil’s Gate", a fear that it would let in demons to destroy the city. The gate is guarded, however, by Enryaku-ji, a temple that at its height had over 3,000 buildings and spanned the entire mountain area. Today, it’s a little smaller, but is so important to Bhuddism in Japan (the temple area is regarded as the Mother of all Japanese Bhuddism) that it is now a UNESCO World Cultural Asset.

This is what Jen and I wanted to see (although when we left this morning, we thought there was an actual "Demon Gate", as we’d misunderstood the text in the travel guide), and set out to find it.

The first step was to take a subway to the Kaisan Sanjo station, where we switched to the Kaisan Railway. Reaching the end of that line, we then switched to the Eizan Railway, and took a single-car train to Yase-Yuen, at the base of Mt. Hiei, a picturesque little area. Then it was onto a cable car, a single-car train pulled up by a cable, and finally a rope-way — what North Americans would call a cable car — to the top of the mountain.

This was when we had our first bout of confusion. The ticket machine bore no English instructions, and the staff were unable to help. A sign on the wall seemed to indicate that for 1,640 yen, we could get round-trip tickets up on the cable car and ropeway. But for 1,700 yen, we’d get something else. But it was the something else I couldn’t understand. Figuring that it was something we’d probably need, we got the extra value package.

The cable car departed 15 minutes later. It’s an odd vehicle, clearly for use on mountains. The grade is at least 15%, if not much more, and requires a vehicle built such that the floor is stepped, like bleachers, as it runs up the curves on the side of the mountain. The single track bulges only right at the middle of the run, when the two cars pass one another (one up, one down), strung together like the counterweights on a grandfather clock.

At the top of the cable car, we switched to the ropeway, transportation I’m more familiar with. Another five minutes, and we were at the top. We were so glad we’d decided not to hike the trail.

At the top, we walked around the Mt. Hiei Gardens, which we weren’t too particuarly interested in. We passed by a sign leading us to Enryaku-ji, but didn’t realize at first that was what we were looking for. (Doh.) Instead, we ended up at the north entrance to the Gardens.

We figured out that our extra value package included access to the gardens. We felt it best to give it a whirl and see what we could find. Unfortunately, we were far too early in the season (Mt. Hiei can get quite cold — there’s even a (really lame) ski hill up there) for the gardens — there were only just beginning to flower.

The view from the top of the mountain is amazing. You can see Kyoto (despite all the haze) and Otsu, a largish city that sits on the eastern side of Mt. Hiei, on the shores of a large lake. But otherwise, there wasn’t much up there worth looking at.

Jen decided we needed to take a bus to get to what we wanted to find. When one finally showed up, we hopped on, and almost by fluke, ended up at the To-Do (or East Area) of Enryaku-ji. After paying the modest fee (assumedly to help maintain the grounds and provide for the monks who live and work there), we entered to take a look.

Unlike the other shrines we’d seen over the last couple of days, To-Do was almost completely deserted of tourists. It was gloriously delightful. And a bit chilly. When we’d left downtown Kyoto, it was almost 19 degrees. It was barely 10 on the mountaintop, and with the breeze, Jen was a bit cold. I was lucky enough to have long sleeves, but it wasn’t helping much.

We toured the complex, looking at the Dai Ko-Do, the Konpon Chu-Do (the Centra Main Hall, originally built in 788), and the Monju-ro. But by that time, Jen was heading towards hypothermia, and even I was a little too chilly for comfort. We decided to head home. 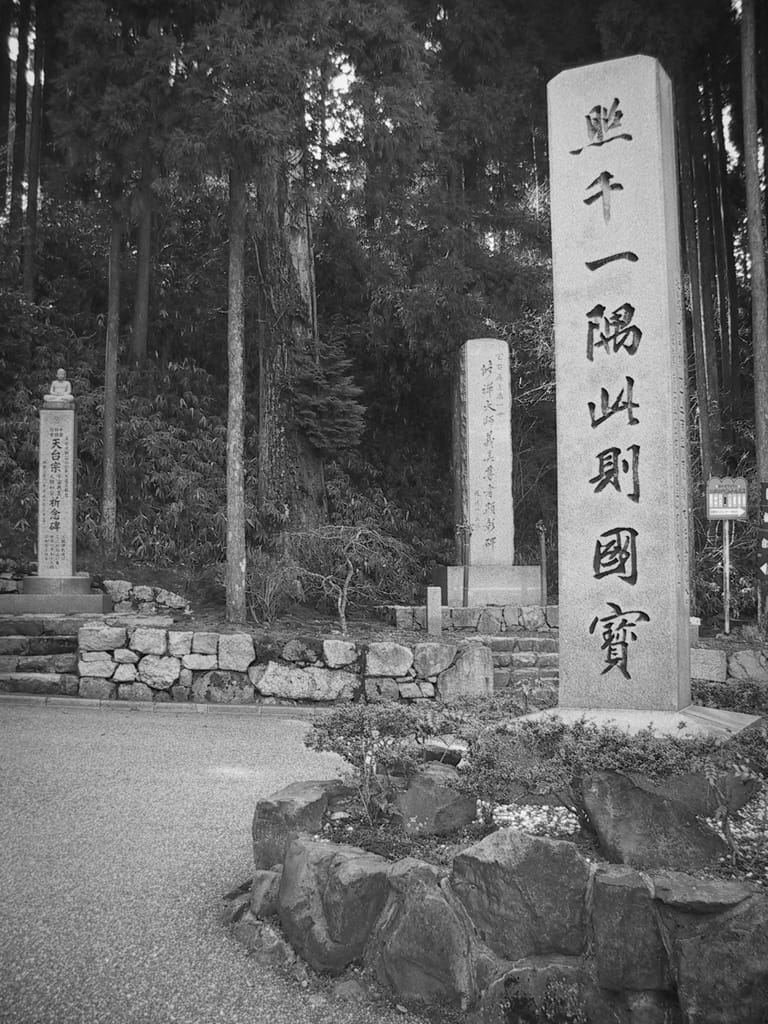 As we were mostly on the "other side" of the mountain, we thought we’d take the cable car on that side down to the bottom, a but to the JR Otsu Station, the train back to Kyoto, and then subway back home. This proved a little more difficult when we thought more about cost (the travel portion of this day pretty much blew the bank on our regular travel patterns) and convenience. So we thought about the bus.

We hiked almost a kilometre trying to figure out our travel options. The bus was the next, and almost last, choice. We were so cold and tired that we were willing to take the next bus, no matter where it went. As it stands, back up to the top of the mountain. This wasn’t so bad, as we could then use the rest of our round-trip ticket to get back down the mountain, and then take the reverse route back to our hotel.

We rested only long enough to prepare for our next shot out. Again, back to Teramachi to find a sweatshirt Jen has seen last night, but hadn’t purchased at the time. When we got there, we were dismayed to find out that the store was sold out. We would spend another half-hour trying to find it at any other stores. Jen would end up settling for a t-shirt.

Dinner was much needed, so we wanted towards the river area, and found a restaurant called Katsukura. It looked interesting because it looked like it had breaded pork, and because it offered something we hadn’t seen anywhere else: English menus.

(Okay, yes, there is a certain appeal to having to negotiate with your server to try and get something you might like to eat. I actually find that a lot of fun. But after last night’s rather disappointing tempura, I felt it better to make sure we were going to get something good.)

Katsukura’s speciality is pork, in various preparations (but usually breaded). Dinner there usually consists of pork, rice, miso soup, pickles (although we didn’t get any), and oolong tea. Simple, yet tasty. Really tasty. Really, really, really tasty. Katsukura cooks a mean pork cutlet, I have to say, and their prawns are over eight inches in length. The sauces they provide for dipping really accentuate the flavours.

Wrapping up dinner, we patrolled the arcades again (third night in a row) for anything new. Jen attempted to win a prize with one of the games, but unfortunately had to give up after she ran out of coins.

We returned to the hotel, deciding that we both needed to relax for the night. It’s been a long couple of days, and with all the fresh mountain air, we could use the chance to rest.