I was up long before I’d planned to be up. I’d wanted to try and sleep a bit more to get rest for the long day of walking ahead, but my body said it was time to rise, and so it did.

Besides, the racket of Kyoto on the move outside the window pretty much precluded any additional sleep.

I took a much needed shower and changed into something a little more comfortable. As Jen took her turn to use the bathroom, our breakfast showed up. Like last night, we had a dish that we cooked at our tables (short, personal-sized platforms for our eating enjoyment). Unlike the luscious duck of last night, this morning featured three large cubes of unflavoured tofu.

Tofu is not really one of those foods I particularly enjoy on its own. It’s bland and the texture is not particularly appealing. Fortunately, that was offset by the other foods, including sweet scrambled egg, pickles, some potatoey thing, rice, and my personal favourite, miso soup (a good use of tofu).

Jen had some difficulties eating her breakfast. But she did a far better job than I ever did at her age.

Bags in hand, we went off in search of our daily adventure. Today, it was shrines, specifically the Higashiyama area on the eastern side of Kyoto. The walk, about six or seven kilometres long, takes you to several of the most popular shrines in the city. It’s not within walking distance from the ryokan, so we had to take a subway part of the way.

We got off at Gojo station on the Karasuma line (about a kilometre down from the hotel), and walked over to Higashiyama-ku, the area of the city we were going to be exploring. The walk took about 20 minutes. We walked until Gojo St. (Gojo-dori) effectively ended at what turned out to be Nishi-Otani Mausoleum, a rather interesting, albeit somewhat quiet, little place. Realizing this wasn’t the start of the walk, we exited and suddenly found ourselves in the middle of a massive graveyard. 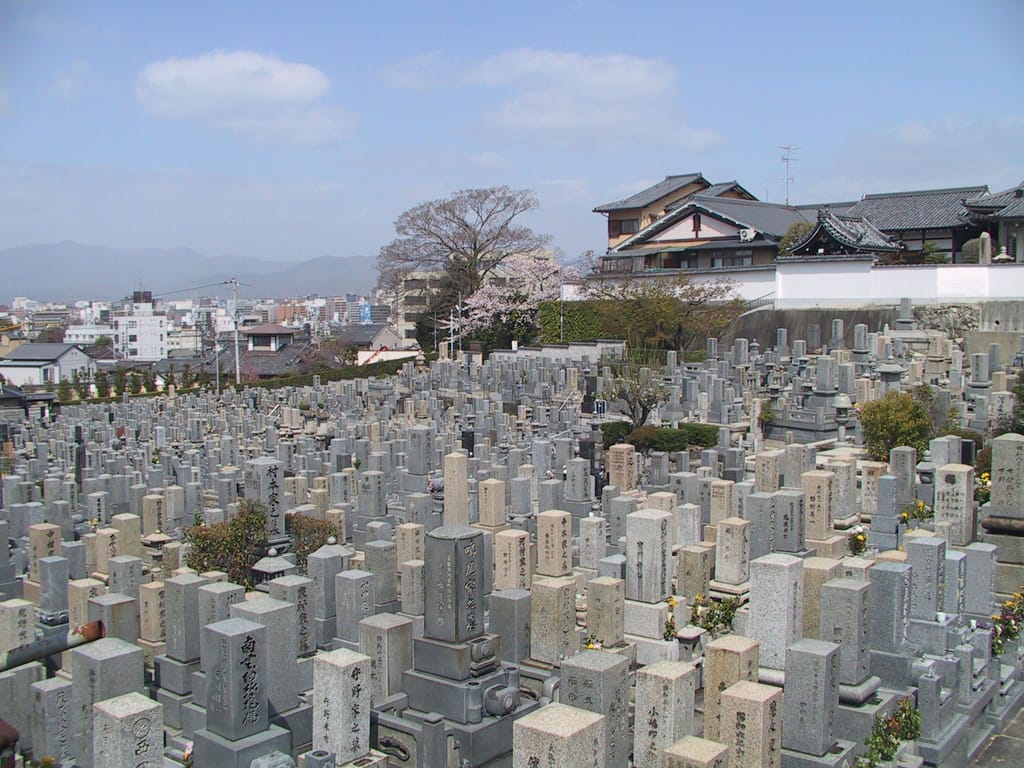 A pathway wound us through the cemetery, eventually bringing us out at the exit to the Kiyomizu Temple. This was the start of our excursion. Walking up a large flight of stairs through a massive temple gate, we found ourselves at the admissions booth (it seems all the shrines have an entrance fee, presumably to offset the costs of maintenance), and entered the complex. 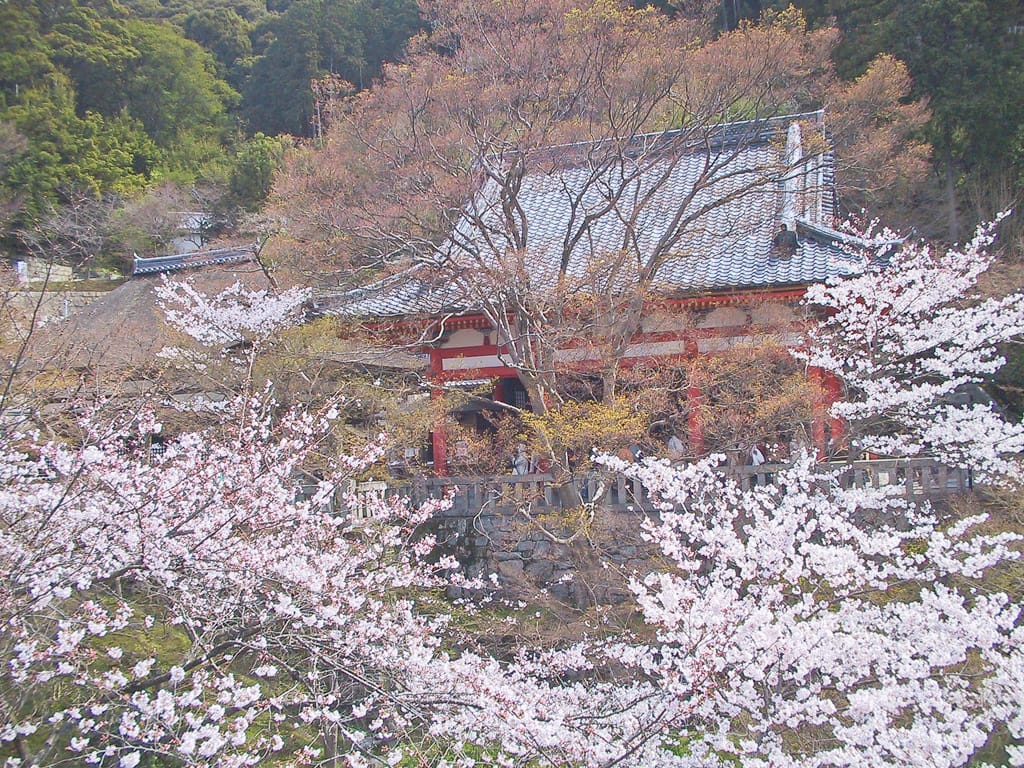 Kiyomizu is one of the most beloved temples in all of Japan. This is mostly due to one of the bodhisattvas(images of Bhudda) that is enshrined here. It attracts huge numbers of people, even during the middle of the week. (There are many large parking lots for bus tours, assumedly solely for the purpose of bringing people to this area.)

We walked around the grounds (the entrance and exit are situated along a path that takes you through the temple grounds so you can experience most of the site), and came back out almost exactly where we’d come in from the cemetary path. From there, it was down into Teapot Lane, the main path from the central road arteries to the temple.

Teapot Lane is so named for the countless stores that sell, well, teapots. And tea cups, and sake cups, and fans, and curios of almost all types. We found a replacement mug for Jen (having lost hers the day before in a taxi mishap), and a new handkerchief with Hello Kitty. I almost bought a dozen gorgeous teacup sets, each time reminding myself that I don’t have that much money to play with (although the thought was very tempting).

We found a gift for Nana in one of the stores. Mike and Brenda had told us to find something very nice for Nana that she could put on her wall. It’s a Japanese fan, hand-painted, and mounted in a wooden frame with a glass cover. To make sure it was good, I fired a note off to Brenda (it was about 20:00 Calgary time) through my keitai (Japanese cell phone that also does email). About 20 minutes later, I had my response: go for it.

I love modern technology. I just wish we could have phones (and services) just as good as the ones here back in Canada.

We wandered down Teapot Lane until we reached the turn for the alley towards the next temple. By this point, however, we needed lunch, so continued a little further. Finding a small noodle shop that offered tempura udon, we broke for a meal, followed by a dessert of gelato and fresh cream wrapped in a soft tortilla-like cone. Very tasty, though very fattening, I’m sure.

Returning to the alley, we headed off in search of the Ryozen Kannon Temple. Due to a somewhat vague map, ended up at the Yasaka Pagoda by mistake. Luckily, someone had enough foresight to put up maps to help out misguided tourists such as ourselves. The signs might be only in Japanese, but the pictures are universal. 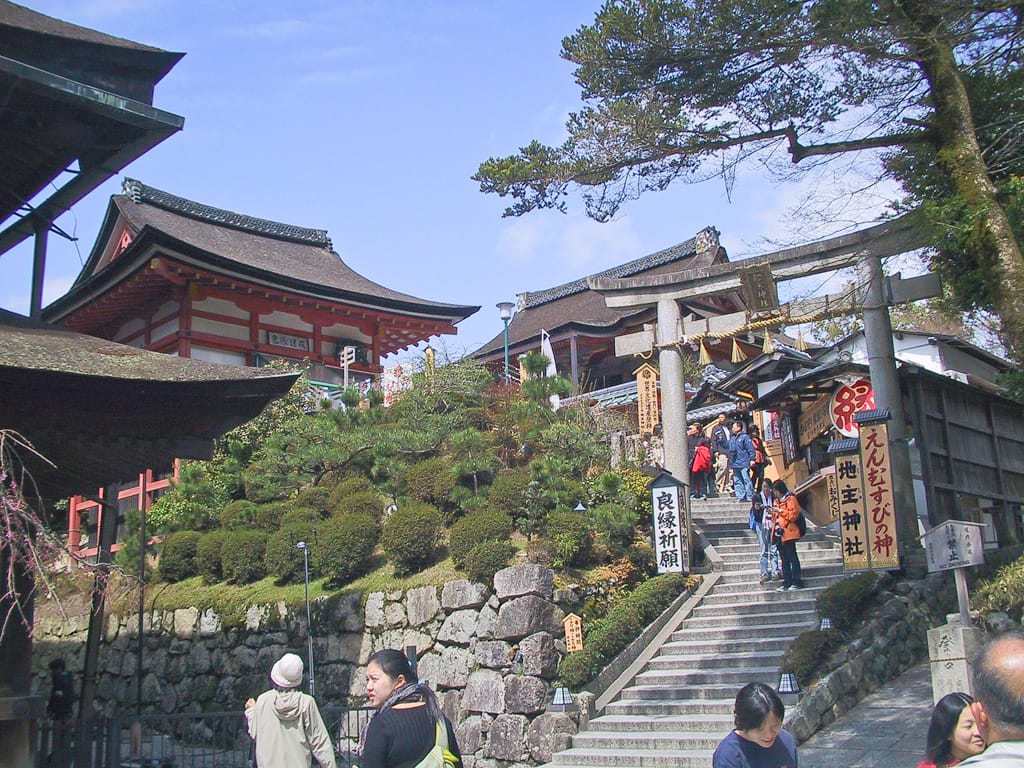 By the time we reached Maruyama Park (a wonderful public space filled full of cherry trees), I heard a lot of "are we there yet" from Jen. I could hardly blame her — even my feet were beginning to hurt a bit, but I really wanted to see the shrines. Over the next three days, we have to do the Imperial Palace (and hopefully, a couple of other shrines), Mt. Hiei, and Osaka. So I’m trying to cram in as much as possible, given the circumstances.

We breezed through Maruyama Park, to find ourselves at the gates to Chion-in Temple, a rather impressive structure with huge stone steps that lead up the side of the hill. Getting up was a workout onto itself. Getting down was another challenge. Most people were taking one step at a time. Jen nearly ran down them, almost reminding me of Sen’s accidental running down of the stairs in Hiraro Miyazaki’s "Spirited Away", only with a little more control.

Jen said it was all about how you ran down. Apparently, one of her basketball tryouts at school had a competition to run down stairs as fast as you could, something Jen did particularly well. She claimed that running down was the hard part — it was the easiest time to trip. Going up stairs is easy.

As if the gods had heard Jen’s little challenge themselves, she suddenly slipped jogging up a short flight of steps on our way out, slamming the top of her shin (just below the knee) into one of the stone steps. We both had a good laugh at Jen’s misfortune, mostly because of the timing.

Little did we know, however, that Jen’s injury was more than a simple bruise. When we stopped briefly at Shoren-in Temple (the next temple along the walk), Jen realized that she had cut herself, and was bleeding (thankfully, not too badly). This is not unknown to Jen, who has several scars of various interesting origins all over her body. It seems that being accident-prone runs on the Tisdale side of the family. 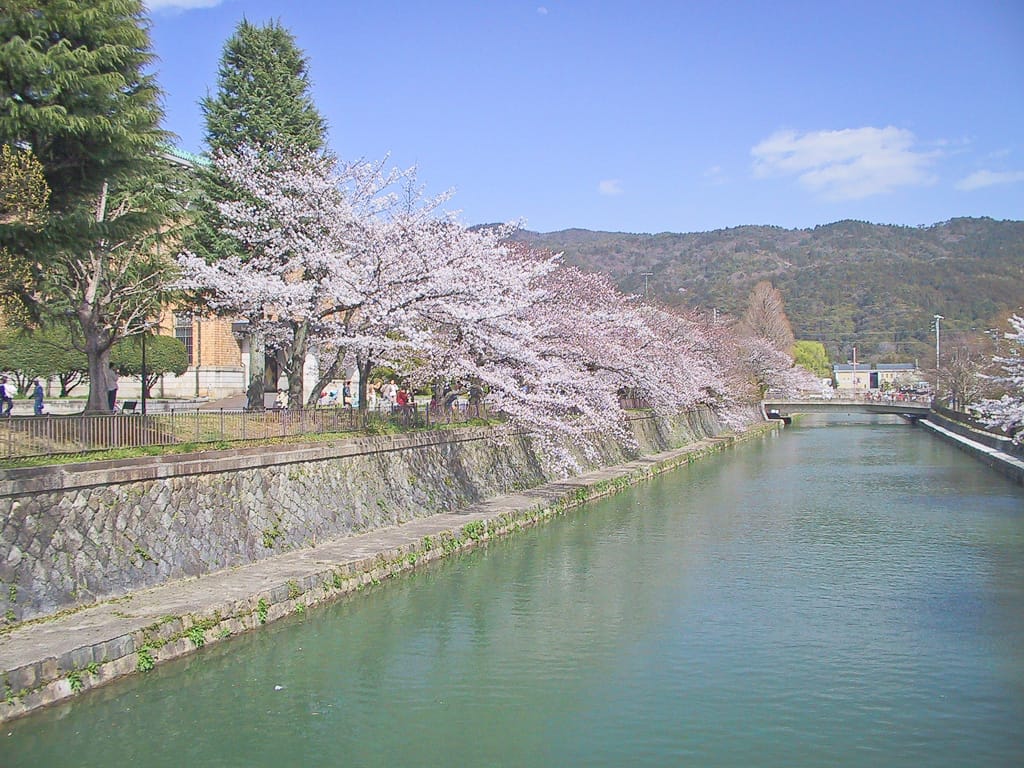 We arrived at the Heian Shrine area, much to Jen’s delight. We took a short break to watch a baseball team practice amongst themselves before we went into the shrine area. Admittledly, I’ve seen better. The shrine at Narita comes immediately to mind as a good example. 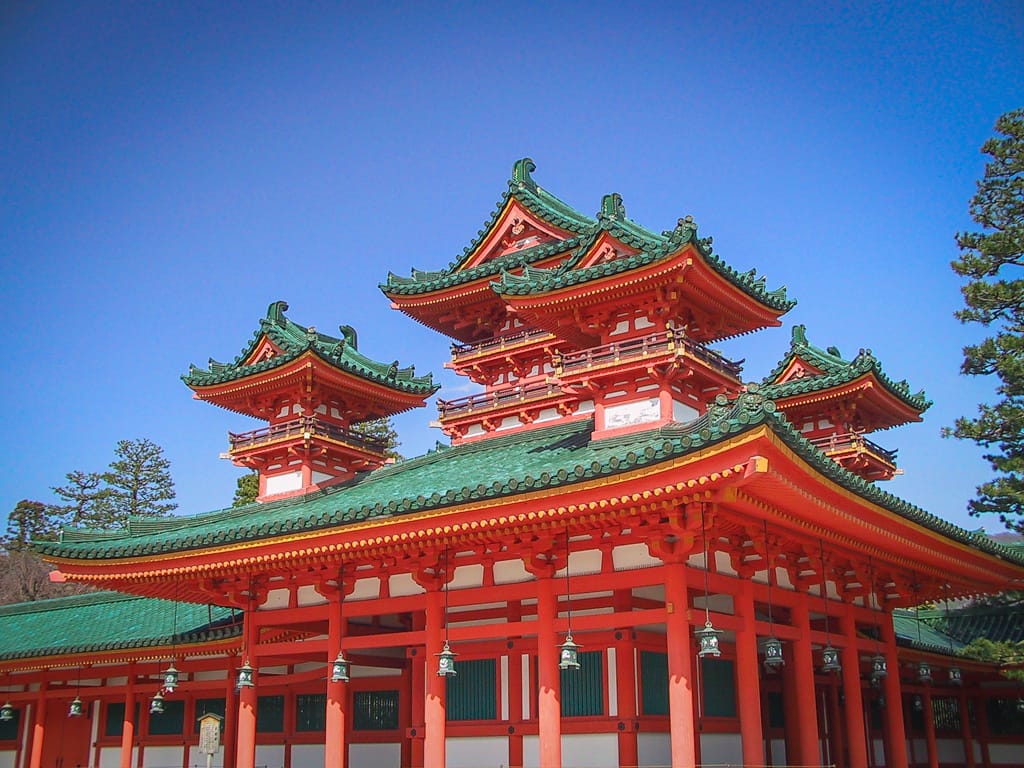 Nevertheless, we (or rather, I) took pictures of the courtyard. The shrine buildings are scaled-down versions of the first Imperial Palace built in 794 AD (though the shrine was built in 1895). Although very nice-looking, aren’t particularly special. We (or rather, I encouraged Jen to join me as I) entered the shrine’s gardens for a look-see.

Listed as being "outstanding", I expected a bit from the gardens. I was less than impressed with the layout, the rear, between the shrine’s rear wall and the outer wall, was almost non-existant, and while the east side was quite nice, it was a far cry from the Hama-Rikyu Gardens I saw in Tokyo last year.

We headed back to the entrance to the Heian area, expecting to take the #5 bus to Kyoto Station. But due to a lack of instructions (or clarity at the bus stop), I thought it better to take the subway. Our feet were sore, but the distance short. We quickly got our tickets (accidentally leaving behind a half-finished bottle of Coke), and headed to Kyoto Station.

The reason for going there was to check out a manga store ("manga" refers to serial Japanese comics and all the associated toys and cartoon shows/movies) that we thought to exist there. Turns out, however, that the manga store was in fact a shop dedicated to Tezuka Productions, the company that creates Mighty Atom (known as "Astroboy" in North America). Jen was a little disappointed in the result.

We tried, instead, to hit the Yen Shop across from the station, thinking that it was a 100 Yen Shop, the Japanese equivalent of a dollar store. It wasn’t. So we thought to try a comic store also in the building. It was a library, not a store. A comic library? Only in Japan...

We arrived back at the hotel to take a bit of a break and rest up a bit. Jen needed a shower, and I was pretty tired, myself. We lazed around the room for a while before deciding that a run back over to the Tenamachi area was in order, as was a run out to dinner.

Stopping at the front desk to drop off the key, the clerk we were getting to know fairly well (he used to live in Vancouver) suggested we go to a restaurant called "Uneme", not far from the hotel. We were hungry, but were interested in first hitting the clothing stores and comic book shops on Tenamachi Road.

Comics in hand (clothing stores will have to wait), we found Uneme, right where the clerk said it would be. While not the most outrageously good food I’ve ever had, it was interesting. The meal included an appetizer of gobo (shredded carrot, beef, and a Japanese root combined with soy sauce and sugar) and fish eggs (not my favourite thing on their own), followed my grilled meats and vegetables on a skewer. Jen then had tempura, and I had sashimi.

And more sake. For both of us. This is something that, admittedly, concerns me a bit. Jen’s developed a taste for this stuff. In itself, I’m not worried. Jen seems to have a great deal of control (she doesn’t like having too much), and the alcohol doesn’t have a lot of effect. Still, I wonder how badly Aunt Brenda’s going to give me heck when we get back.

Back to Tenamachi. (Seeing a pattern here?) Most of the stores were closed by now, so there wasn’t much for us to do except video games. Then it was back to the hote, first stopping at the Lawson’s for snacks.