The weekend past was the August long weekend. Well, it was the long weekend for most people. For me, it was one of three things: painting the house, spending time with family, or being at work.

Four things, if you count sleeping.

Mom arrived in town Wednesday afternoon. Her arrival was what had fuelled my desire to paint the house. The idea was to have the whole thing painted in time for her arrival. Yeah, my ambition’s pretty sizeable. I figure: Go big, or go home. I might have made it, had it not been for a couple of work-related things that came up and threw me off-target for time.

Wednesday night I spent with Mom, Aunt Brenda, and my cousin Jen. Thursday night was here at the office, dealing with project work. For the first time since I started doing overtime at Critical Mass (on my second day on the job), I wasn’t programming. I was doing the things I used to do before I came to Critical Mass: document editing and formatting (and a little writing and editing).

What was I working on? We’re doing the single largest pitch in the history of Critical Mass. And I can’t tell you who it’s for, so don’t ask. All I can tell you is that if we do win it, the contract will fundamentally change Critical Mass. It’s that big.

I know what you’re thinking: Aren’t I Mercedes-Benz Boy? I’m still working on our single largest account, no worries about that. But it’s been a slow year for us, and I had the opportunity to contribute. I also offered to assist with the document construction.

Why did I do that? Well, for those of you who know what I used to do, it’s probably a bit of a surprise. For those of you who don’t, allow me to tell you why I’m a web developer. After graduating university, I became a Technical Writer (something I’d started doing on co-op work terms). I did technical writing for six years in total. Towards the end, I hated it so much I sometimes felt like a coyote caught in a trap, and wanted to gnaw my own hands off.

While at Radical Entertainment, I started pushing myself more towards web development. I’d already been doing it for a number of years, so it wasn’t that big a stretch. Owing to a need to leave Vancouver, I came here. Based on a recommendation from my friend Scott, I applied at Critical Mass and the rest is history. But what isn’t commonly known is that while I was waiting for word from Critical Mass about my position, I was actively avoiding several technical writing positions.

That’s how much this pitch means to Critical Mass. That’s how much I was driven to go back to doing what I used to do. That’s how I ended up in the office on Thursday night, most of Saturday, and all of Monday (8:00 to well after 22:00).

That’s how I remembered how much I hate Microsoft Word.

Friday night was the first of what will likely be many family dinners while Mom is out visiting. (Not that I’m complaining in any way.) But it was Saturday that was the big event — the birthday party for my Aunt Brenda. I won’t tell you how old she is, but it’s the one that causes people to put 50 pink flamingos on your front lawn.

It was supposed to be a surprise party. It was supposed to be a grand little affair where we get her to scream in delight, etc. But I seem the only living person in my family able to organize these things without the guests of honour finding out. Aunt Brenda almost planned her entire party. Were it not for me being a royal pain-the-ass, she would have spent a good portion of it in the kitchen preparing food. I started banning her from the kitchen.

It wasn’t easy, either. Aunt Brenda’s kitchen is a magnet for her. Every time I turned my back, she was back in there. I actually uttered: "Don’t make me come in there!"

I ended up finally kicking her out and handling the things she would have done, like making the best darn corn bread on the planet. It’s a heart attack in a pan, but it’s worth the potential coronary. I have got to get that recipe one of these days. 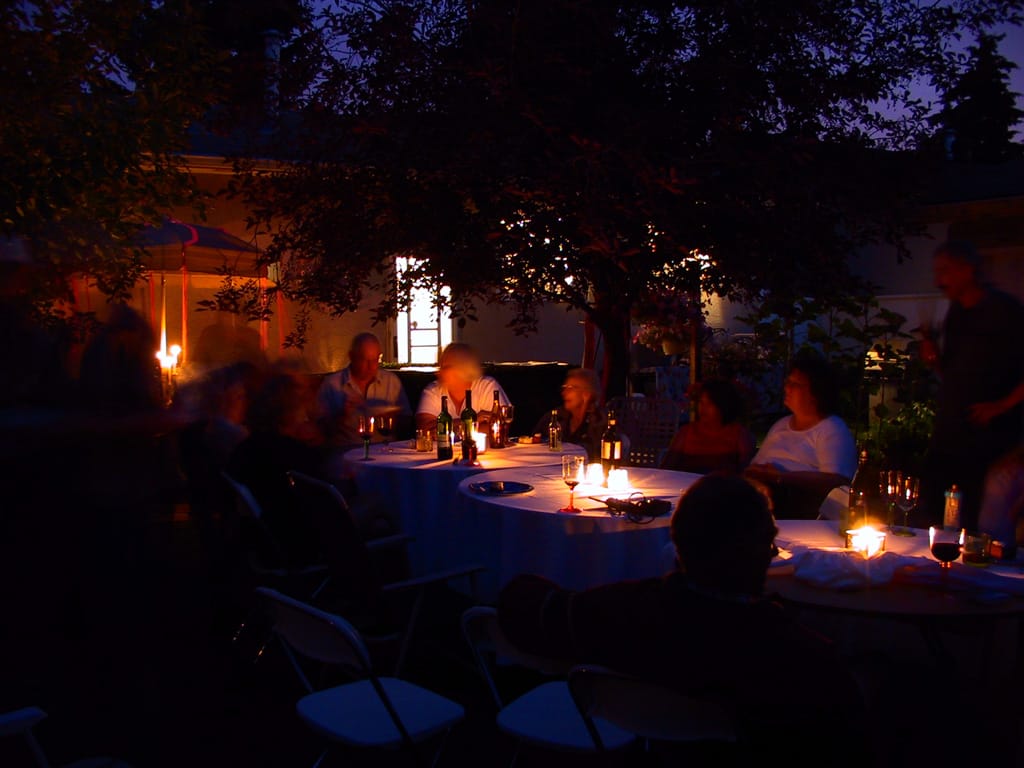 The next day, I woke up a little early (for a weekend) to resume painting. It’s finally cooled off a bit, and it allowed me to tackle painting the front of the house — the only side I wanted to do before Mom saw the house. (I still have to do the west wall, but you can’t see it unless you’re in my neighbour’s yard.) I even got several of the windows finished up.

Painting a house can be a bit of a Zen thing. ("Zen and the Art of Decorative Trim"?) I’ve had several people tell me that it might be great to have tunes blaring while slapping down a coat of paint. I have yet to have a radio turned on. And when I’m using the paint sprayer, I can’t hear anything else.

House painting, in some ways, returns you to your youth. Especially when you use latex paints. It doesn’t stick to glass, plastic, or skin. It makes you feel like that creepy kid in second grade who put Elmer’s Glue all over their hands so they could peel it off like a layer of skin. It’s especially fun in the shower. Doesn’t matter how dried the paint is — a little warm water and soap, and poof there’s a clump of sloughed-off paint skin on the shower floor.

Mom, Aunt Brenda, and Jen appeared around 14:00. Mom was being dropped off while the other two checked out "Johnny English". Mom, Tamara and I chatted in the backyard for a while, listening to some jerk across the alley scream his head off at another tenant about unpaid bills and broken windows. It was an argument I wasn’t particularly interested in listening to, but had little choice.

Mom half-guilted me into cleaning up the yard a bit while we sat out back. Mostly cutting back all the suckers growing from two trees and the lilac bush. Admittedly, though, it did look better. Then it was back to painting.

As Sunday was Aunt Brenda’s actual birthday, we all went out for dinner at a nice homey Italian restaurant along 17th Ave., Buon Giorno. Definitely not the swankiest restaurant in Calgary, but they make a good meal. Try the scallops — their chef cooks them to absolute perfection.

My cell phone rang at 7:33 Monday morning. It was Chicago. Although I’d been on call all weekend, this was the call I’d been expecting. I was in the office 10 minutes later and editing. I had hoped to paint that morning. No matter. The worst that would happen was I’d be editing until 16:00, at which time the documents were off to Kinko’s for copying.

Or at least that’s what I thought.

More problems with Word trying to do things I didn’t want it to do. These are problems that Microsoft has never removed. And before you go saying: "Must be a problem with the user", when I first detected them with Word 97, I stumped the tech support guys in Redmond, WA who were unable to solve the problem. You’d think after six years, they’d fix the damn thing.

Final call came sometime after 22:00 last night. I was tired. I hadn’t felt that tired as a result of office work in a very long time. But the pitch is off to the hopeful client-to-be. Now we just have to wait a half a month to find out if they want to take us to the second round or not. I hope there’s not as much pressure as the first round.

My idea of pressure on the second round is the kind sealed by bottle cap.