Today was my last full day in Japan. There was so much I still wanted to see and do. I couldn’t do everything ... but I darn well tried!

Chris had to work, so would stay behind in Yotsukaido. Kaz, her friend, Ellesen, and myself went into brave the city of Tokyo and what wonders there were yet to find.

I bade Ellesen and Kaz’s friend farewell at Tokyo station. I had a very rigorous trip planned for myself, and I didn’t want to drag people to somewhere they didn’t want to go. Kaz and I agreed to meet back at 16:30 (we parted ways at 13:30). It didn’t give me a lot of time, but then, that’s part of the challenge.

My first stop was at the Imperial Palace. There were a couple of things I wanted a picture of that I didn’t get on the bus tour. That, and it was actually somewhat sunny for a change. I hurried through the complex. It took almost 30 minutes, counting traffic lights, photographs, and the fact that the palace grounds are very large. 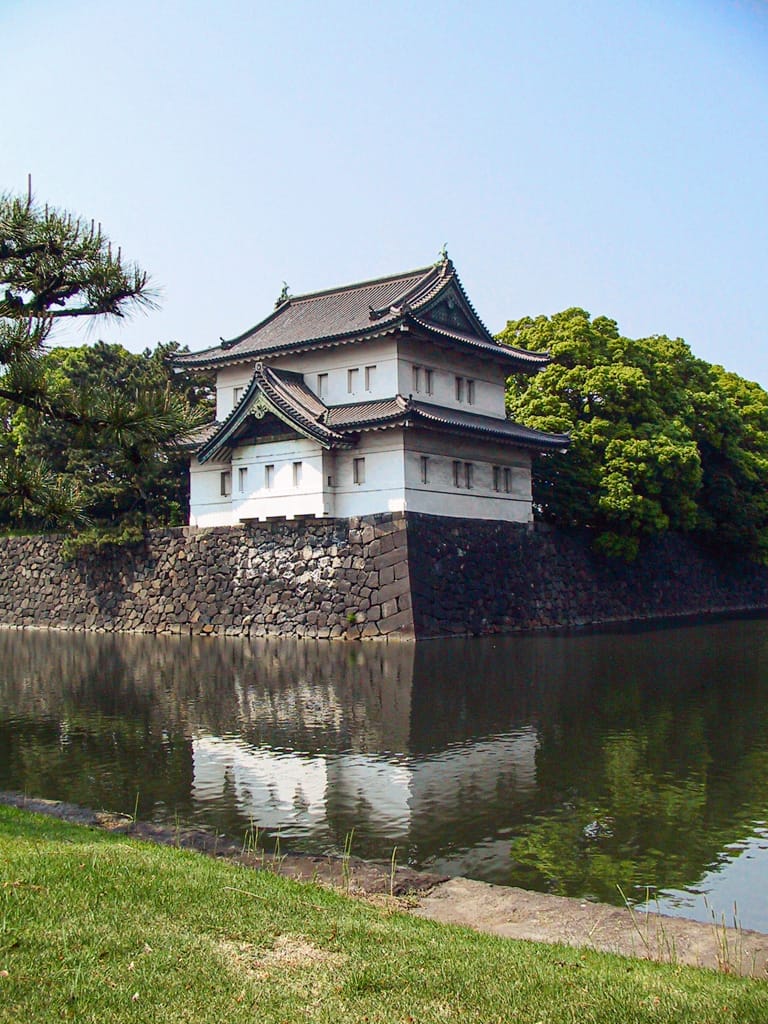 Then it was back towards the Yamanote line, which I would follow to the stop before Hamamatsucho, where I had previously spied a steam locomotive on static display. The day was becoming quite warm, and I was sweating quite a lot. Another reason why I was glad not to have anyone else with me.

Along my route, I saw a few things I hadn’t seen before. Most of it was architectural, but there were a few interesting things and views. One of the strangest was when I was held up at a crossing by a traffic cop. At first I couldn’t tell why, since there was no traffic. But then I saw it. Or rather, heard it.

It was a parade, of sorts. All marching bands, and all Japanese, so far as I could tell. I assumed it was for some sort of competition. I didn’t have time to find out, though, and blasted past to find my steam locomotive.

A few blocks away, I found my quarry. Although I couldn’t read the sign, I could only gather that this was a switcher, or short-distance locomotive. Tank engines usually didn’t go too far. As near as I could tell, it was based on a British design, but Japanese-built. It had served its last a long time ago, and now served as decoration next to the JR lines supporting both the ring railway and the shinkansen lines. The only passengers the locomotive handles now are eager children and birds. 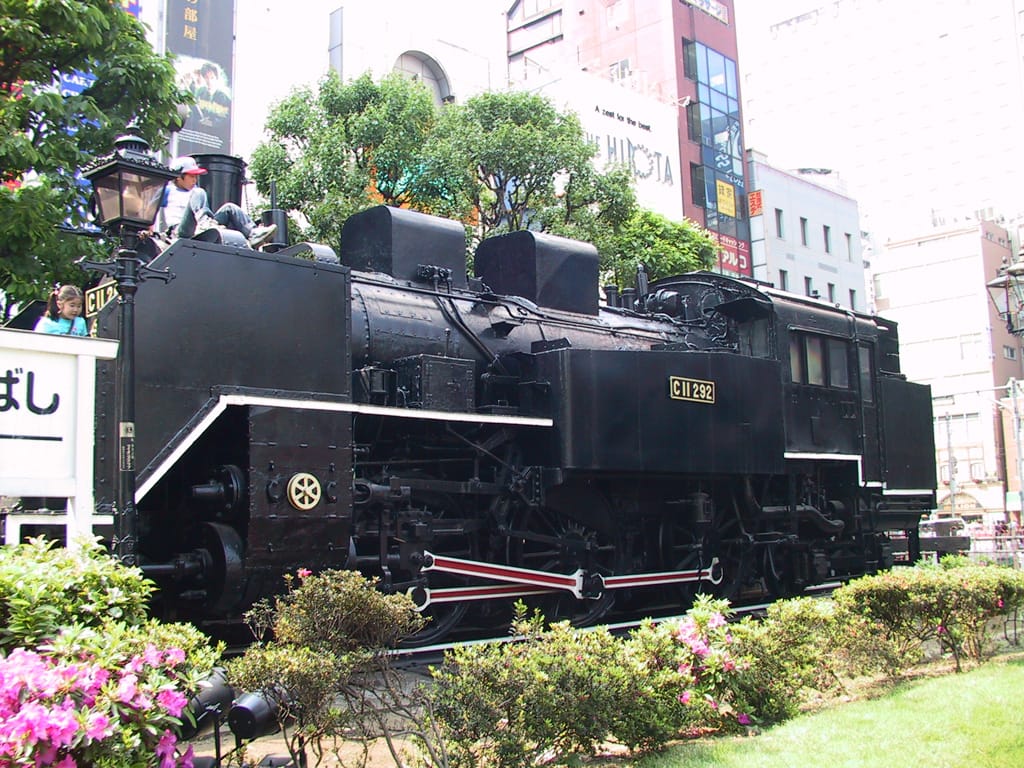 Turning away from the locomotive, I navigated my way through the maze of streets at the edge of the Ginza district to find my way to the Hama-rikyu Garden. Formerly the private hunting grounds of the Edo shogun, it’s now a public park (with a 300 yen admission). It’s a beautiful place to spend an afternoon.

I didn’t have an afternoon. I had about 20 minutes. I figured I’d blast through the park, come out the other side and hit the JR train at Hamamatsucho, going up to Ueno. Little did I know, however, that I was going to be blocked by one little crucial detail: The park has only one entrance and exit. Of course, I didn’t realize this until I was on the other side of the park. But this gave me a chance to see the large tidal pond, the bridges, the pathways, and the 300 Year Pine (actually only 295 years — it was planted in 1708).

By the time I got to the JR Hamamatsucho station, my feet, legs, and back were discussing mutiny from the rest of me. Couldn’t blame ’em, though — I’d been through a very long walk in a very short period of time. I still had about 45 minutes.

Ten minutes later, I was in Ueno Park. I made a beeline for the first drink machine I could find. I was dying of thirst, and quickly guzzled half of a 3/4 litre bottle of Coke. I still had a lot of walking to do, so got started.

Ueno was once a forest on the outskirts of the shogun’s city. Now firmly wedged in the Yamanote area of Tokyo, Ueno is the location of a large park, the zoo, Art Museum and National Museum. It’s very much like Central Park in New York, except that you’ll also find shrines scattered throughout the park. It’s very picturesque and calming. I only wish I had more time to see it.

My ultimate goal was to visit the Shogun Tokugawa Graveyard at the north end of the park before boarding the train back to Tokyo station. Not being able to read Japanese, I accidentally took a wrong turn when I exited the main part of the park, taking myself away from the park and the JR station. Luckily, my spidey senses told me I was going the wrong way, and got myself going the right way again.

The cemetery is quite large, and very old. (It holds the mausoleum for the 7th shogun.) It’s very Zen. Japanese graves are elaborate, yet very simple. Clean lines, but are often shrines onto themselves. I would have loved to wander a bit more, but had to hurry. I was already late for getting to Tokyo station.

I was about 15 minutes late meeting Kaz. We still had some time to kill — Chris didn’t get off work until 20:30. This meant I could do two things that I hadn’t got the chance to do: buy me a small digital camera in Akehabara, and raid Shibuya for the infamous 100 Yen shop and music stores. Luckily, Kaz was more than willing to indulge my whims.

Our first stop was Akehabara, where I made a beeline for the Laox store. (Supposedly one of the best places to purchase electronics.) They also deal in duty-free sales. I have no idea how one would apply for duty-free status, but suffice to say, I’m glad they do. Twenty minutes and one new digital camera later, we were back out on the street and heading for the train. It was off to Shibuya.

Shibuya’s darn near on the opposite side of the Yamanote circle, so it was almost a half hour before we got to Shibuya station. Once outside, there were two destinations: HMV, and the 100 Yen store. I had promised a friend of mine to pick up some Japanese albums for him while here, and I knew HMV would have what I wanted.

As it turns out, the first store we hit crossing the intersection sold CDs. Since CDs are the same price (or pretty darn near) at every store, we skipped the HMV in favour of a closer quarry. (After we had a quick drink at the Starbucks, of course.) Having Kaz with me proved very helpful again, since she’s able to read Japanese, allowing us to find the albums we were searching for.

Then it was off to find the 100 Yen store. A little more of a challenge, but a few questions to others walking around soon led us to spendthrift heaven. Four floors of all sorts of things for 100 yen. The 100 Yen stores are very similar to the Canadian dollar stores, with one major difference: unlike the dollar stores where things can cost several dollars, every last item in the 100 Yen stores is 100 yen. No exceptions. (100 yen is worth roughly CDN$1.25.)

I walked out with 2,300 yen worth of stuff, most of it dinnerware.

We returned to the station, and started back towards Tokyo station. There was one more stop I wanted to make before I left Tokyo for the last time (at least on this trip): see Tokyo at night. Tokyo gets dark by about 19:00. Luckily for me, the World Trade Centre is open until 20:00. Arriving with 30 minutes to spare, Kaz and I took a look at nighttime Tokyo from 40 floors up. 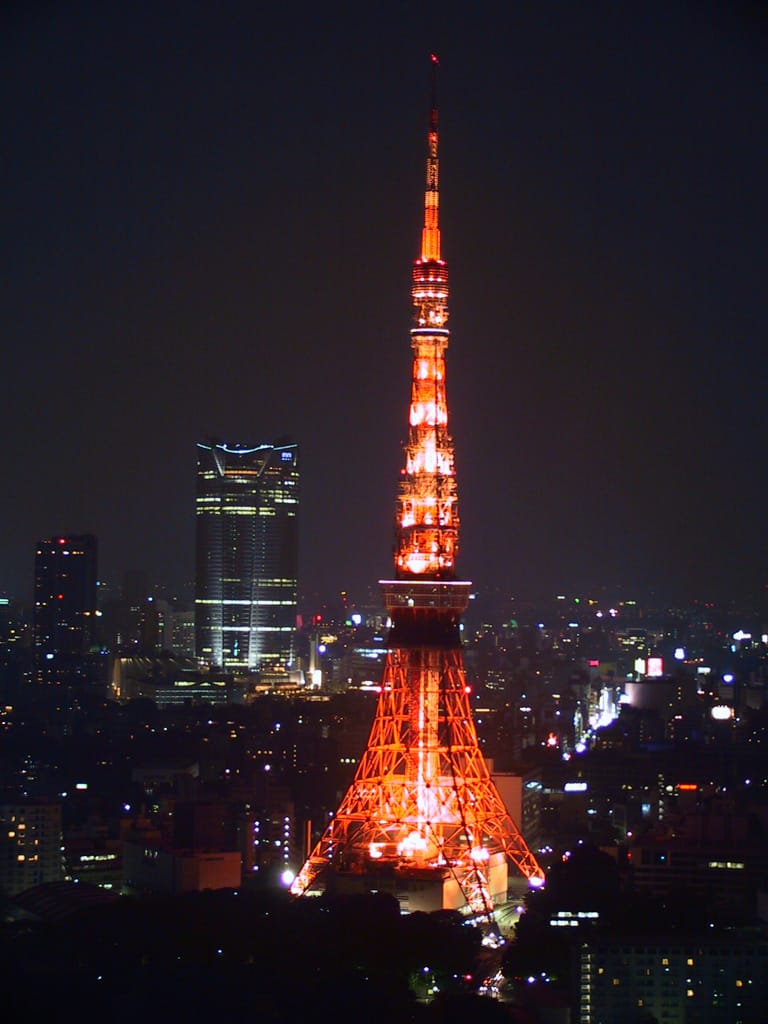 Arriving back in Yotsukaido around 21:30, we immediately went to Chris’ apartment to dump our things, and so I could change into a less smelly set of clothes. Because it was already so late, going to Chiba wasn’t a great idea — we’d end up taking a taxi back again. Instead, we would hunt down a local restaurant. We ran into Jan (doing a midnight garbage run), who recommended a restaurant that was open until 05:00. Jan is a connoisseur of these restaurants.

What’s with the midnight garbage run? It’s so he can dispose of his garbage, of course. In Japan, space is at an absolute premium — landfills are extremely few. So recycling is vigorously practiced, as is the separation of combustible and non-combustible refuse. Garbage collection, as a result, is fairly complicated. Jan ends up having to distribute his stuff over a fairly wide area, lest he put it all in one place. Or that’s so I gather...

The restaurant was nothing particular special, but the food was good ... just like the company I had. We ate and talked until well after midnight, when the table next to us finally got too loud, and it was time for us to leave.