Another day, another adventure. Today, though, we would throw in a different nationality.

We all rose at basically the same time and quickly prepared for our departure. We needed to be in Yokohama by about 10:30, which meant we had to leave fairly early. It’s just shy of two hours to Yokohama.

The city of Yokohama is all part of the same massive metroplex that is the Greater Tokyo area. You never really leave the city area, you just go from one area to the next. And so it was with Yokohama that we eventually arrived at a station that was outside of Tokyo proper.

We didn’t stay long in Yokohama, though. We were headed for Shin-Yokohama. We immediately hopped on the Yokohama local line, and travelled two station stops along with a few hundred fans of a Japanese boy band playing at the Shin-Yokohama arena. They made the station a bit tight for space.

We were to meet a friend of Chris’ at the station, but had a great deal of trouble trying to find her. As such, we ended up abandoning that search and decided to meet at our ultimate destination. After dropping off a bag or two in a locker, we headed through the subway pedestrian tunnels, heading north. We found Chris’ friend almost as soon as we exited the tunnels.

I should point out that I had somehow ended up leading our little band through Shin-Yokohama having no map nor ability to read Japanese. This happened only after saying I could read a map, and knew that the tunnel would lead us in the approximate direction of our first quarry of the day. I came close — I was in the right area, on the perpendicular street, but missed the actual road by one block.

Not too bad for someone who can’t read Japanese, eh?

Our first target of the day was the Shin-Yokohama Raumen Museum. It’s dedicated to the history and manufacture of ramen — Japanese noodles. I know what you’re thinking: A museum dedicated to noodles? I thought the same thing when I first heard about it. (In Kannai, just to the west of Yokohama, is a museum dedicated to curry.)

It’s not really that impressive a museum ... it’s more of a glorified ramen restaurant than it is a museum. In fact, only the main floor has any historical information. The two basement floors are a recreation of 1958 Tokyo, filled with about eight or nine ramen shops. The interior is planned in such a way so that guests don’t mind waiting upwards of two and a half hours for their noodles. 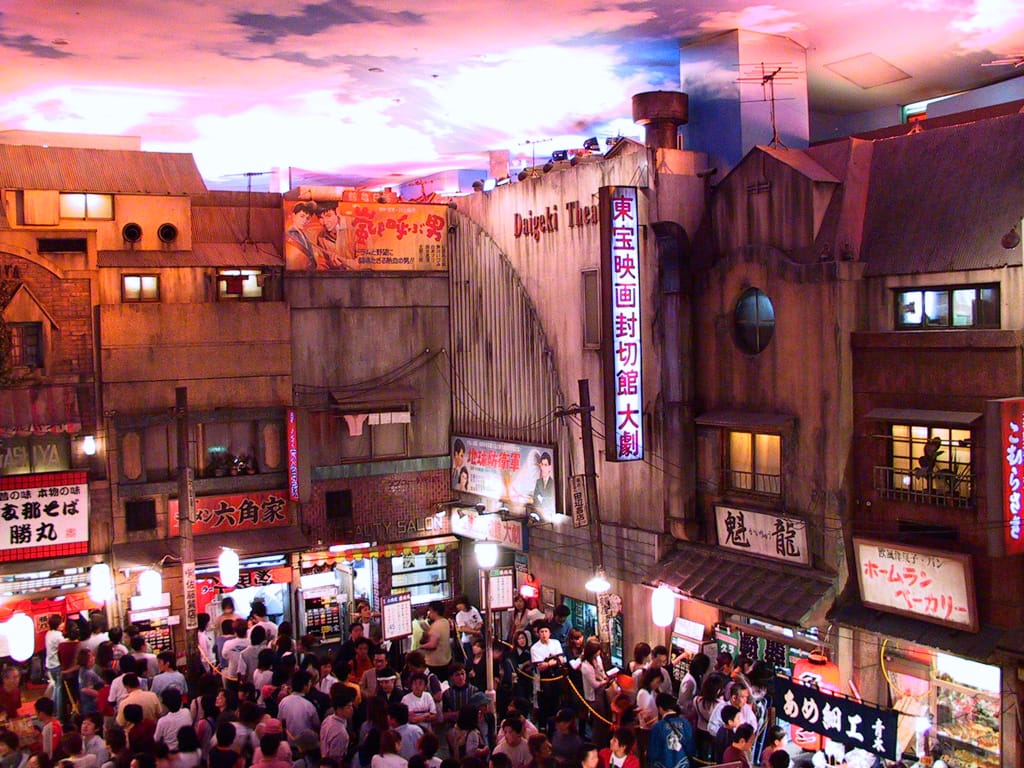 Yes, two and a half hours.

When we arrived, the museum had set up a giant tent across the street to hold the hundreds of people waiting to visit. A big sign indicated how long it would be before we could enter, and how long a wait there was just to have a bowl of ramen at each of the shops. Although Ellesen and I were heart-broken to do so, we all opted to forego with noodles, and just visit the museum.

Finally our group number (32) was called, and we headed into the museum. Lineups were immediately visible for the ramen shops. We skipped over the lines and went down into the main part of the museum. This area is known as Raumen Town, and is a recreation of the Shitamachi downtown area of Tokyo, circa 1958. The roof is painted to look like early evening, and the lighting matches it appropriately. It’s a quaint setting, and strangely comfortable.

We walked around the "top" level of Raumen Town, passing by the people lined up for restaurants, looking at all the decorations. Then it was into the Dime Store, which is roughly what a candy shop would be like ... if it were stocked with the candies of today, that is. The effect was roughly the same. We only took pictures of the lower level, since it was little more than space to queue people so they could eat.

Like I said, it was a glorified noodle restaurant.

Back up to the main floor, we checked out the actual museum part of the museum. Three hundred ramen bowls, some examples of noodles, a model of the first ever bowl of noodles made in the 17th century, and the ubiquitous gift shop. I think the gift shop was bigger than the museum section.

You can’t leave a ramen museum without a souvenir. For me, it was — what else — a ramen bowl. I don’t have one at home, and the store had some extremely nice ones. Although I was tempted to get a gilded one, I chose a more dishwasher-safe piece.

Following the museum, we decided to grab a bite to eat. Most of us were now quite hungry, especially having been to a museum about food. We would not have noodles, however, and had to settle for the Mos Burger next door.

It was back to the locker to store our things before heading to our next stop: China Town. This would present a problem, however. I had a sneaky suspicion that storing our things in Shin-Yokohama would be detrimental to our return trip home. Sure enough, a review of the map showed that we would have to travel to the other side of Yokohama to get to China Town — we’d have to double-back on our route later on to retrieve our things. Chris ended up going back for our bags before we went on.

Arriving in Kannai station, we dumped our things into a locker, and went in search of China Town. It seemed a little weird to be looking for a China Town in Japan. There always seems to be a China Town, no matter where you go.

Yokohama’s China Town is quite large, and has an outer China Town and an inner China Town. The outer "ring" looks like Calgary’s Chinatown — a few shops, restaurants, but nothing fancy. In fact, I was a little disappointed that we hadn’t seen anything more interesting. That was until we rounded a corner and were presented with a huge gate into the heart of China Town, through which streamed an impossible number of people. 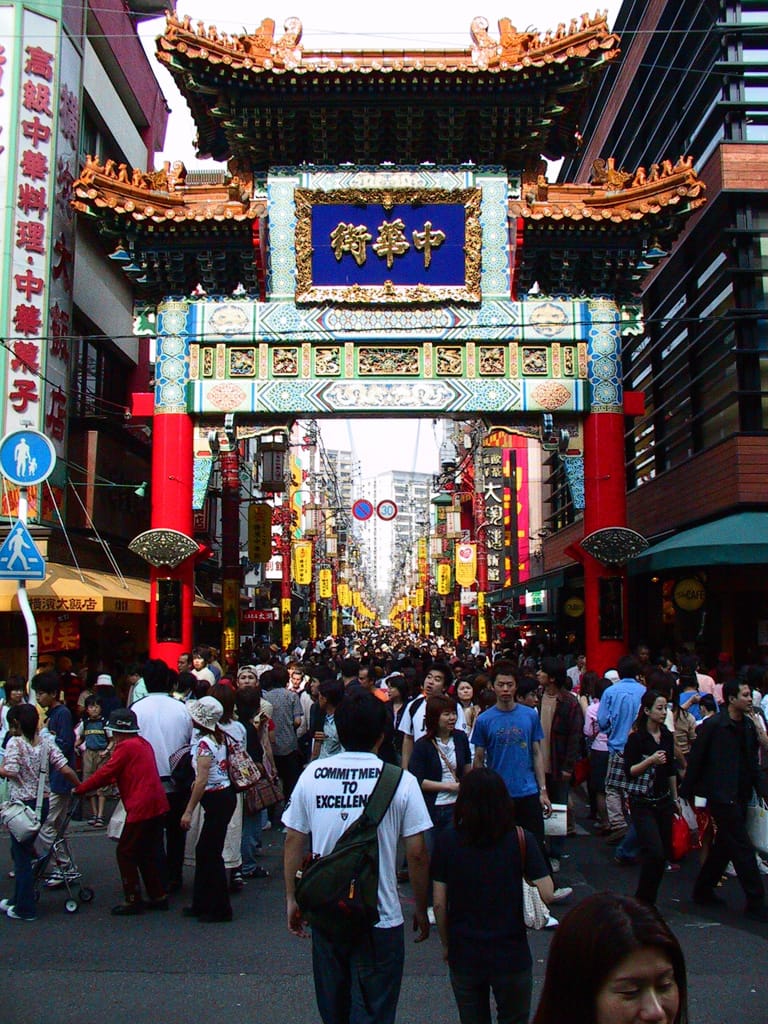 This was Main Street China Town. And it is perhaps the most impressive I’ve seen. (I hear San Francisco’s is pretty nice, but I haven’t seen the whole thing yet.) Sardine cans aren’t as well-packed as this area was. Luckily, there weren’t many black men, balding white guys with black backpacks, or near-six foot tall white women with pig tails. Even though we periodically got separated, it wasn’t too hard to find each other again.

As we walked down one of the streets, we passed by a stand selling lemonade. That in itself wasn’t odd — but the seller was a mid-20’s Caucasian male. He was speaking Japanese as if he’d been speaking it all his life. It was a little strange to see. Just as we passed him came a voice we didn’t expect to hear. No-one we knew, but you wouldn’t normally expect to hear a Brooklyn accent booming out:

Hey! How ya enjoyin’ ya Golden Week?

At one point, Chris spotted people drinking from coconuts — the milk, that is. Just a simple coconut with a hold drilled in the top. The coconut had been refrigerated to make it nice and cool. He bought them for most of us, even me — although apparently I was a bit of an accident. The milk is a bit thick, slightly sweet, but not rich in flavour. I could only drink about half before I started to feel a bit ill, though, and had to throw out the rest.

Though we’d been searching for an all you can eat dim sum restaurant (there were a couple, but the lines were long), we eventually settled on a normal restaurant that offered some dim sum dishes in addition. In typical form, we ate too much. But it was very good. It doesn’t seem to matter where you go, Chinese food doesn’t change much.

Rolling out of the restaurant, we waddled back to the Kannai station, retrieved our things, and headed for the train. Changing at Yokohama, we boarded a train that went all the way to Yotsukaido. I was asleep before we reached the next station. I slept all the way to Ichikawa, about 25 minutes out of Yotsukaido.

Back at the ranch, we hung out, and watched Ping Pong a second time — this time to benefit Kaz’s friend, who had come back with us for the night. Having already seen the movie once, I didn’t need to worry so much that there were no subtitles. (We had to turn them off because there were a few bits of dialogue in Chinese that Kaz’s friend needed the Japanese translation for).

Tomorrow is my last full day in Japan. Depending on weather, I’ve got a busy day ahead of me.