I think a good rule of thumb for how long you should stay in one place while on vacation is your comfort level. When you become too comfortable, you’ve stayed too long. I’ve become very comfortable with Tokyo.

That’s not to say I’m bored with Tokyo — far from it. This city — this country, in fact — has so much to offer that it is seriously impossible to cover all of it in a mere two weeks. I could spend almost two weeks in Tokyo alone! I wish I didn’t have to go home right away, so I could spend more time seeing the country. Four days remain.

For the first time since I arrived, I was not in control of the day’s events. Today, Ellesen called the shots. I didn’t mind one bit, either. I needed the chance to just look around and let someone else lead us into the unknown.

We started off in Harajuku, an area that pretty much defies definition. It’s a shopping district, similar to Shibuya, but is filled with an unbelievably eclectic collection of stores. You can have a store for Beatles aficionados next door to a trendy sock store, across the street from a down-n-dirty punk and Goth clothier, around the corner from an athletic shoe outlet. Strangely enough, it all works.

We started wandering down Takeshita Street [insert inane jokes about street name here], jumping from store to store. We weren’t looking for anything in particular, but half the fun of places such as this is just seeing what’s there. 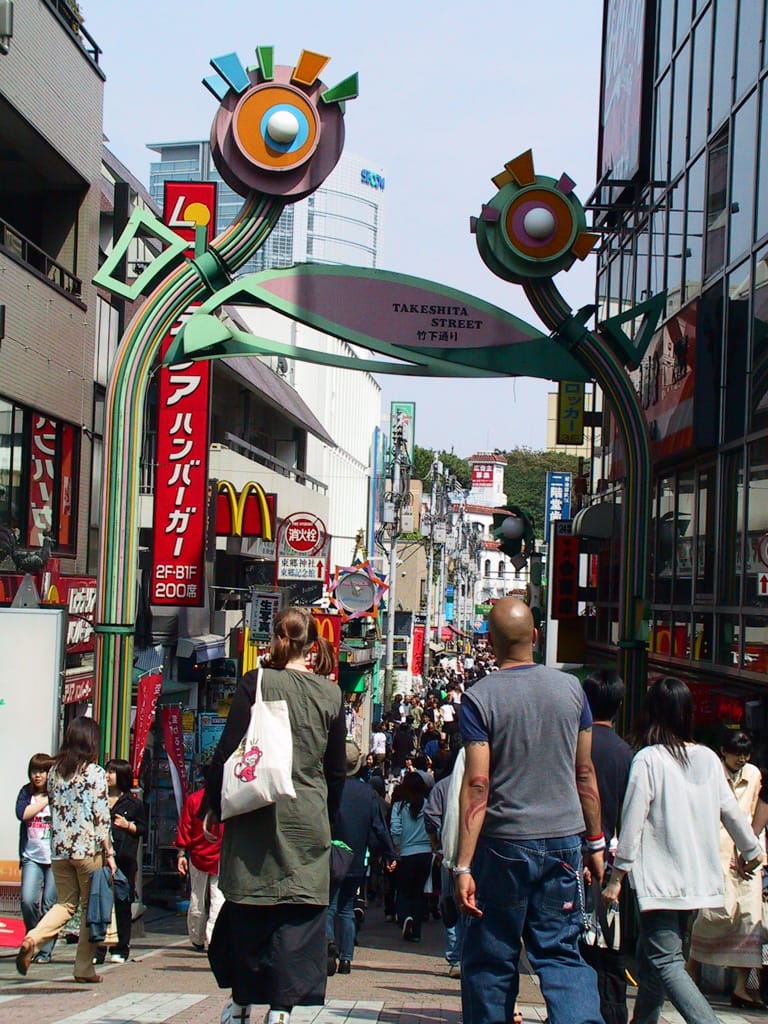 One of the strange things about Takeshita Street is what happens when you cross the road. Takeshita is bisected by a major road (don’t ask me which one — I don’t have a clue). One side is a patchwork of stores covering almost every taste. The other side is uber-trendy, and prices skyrocket almost immediately. 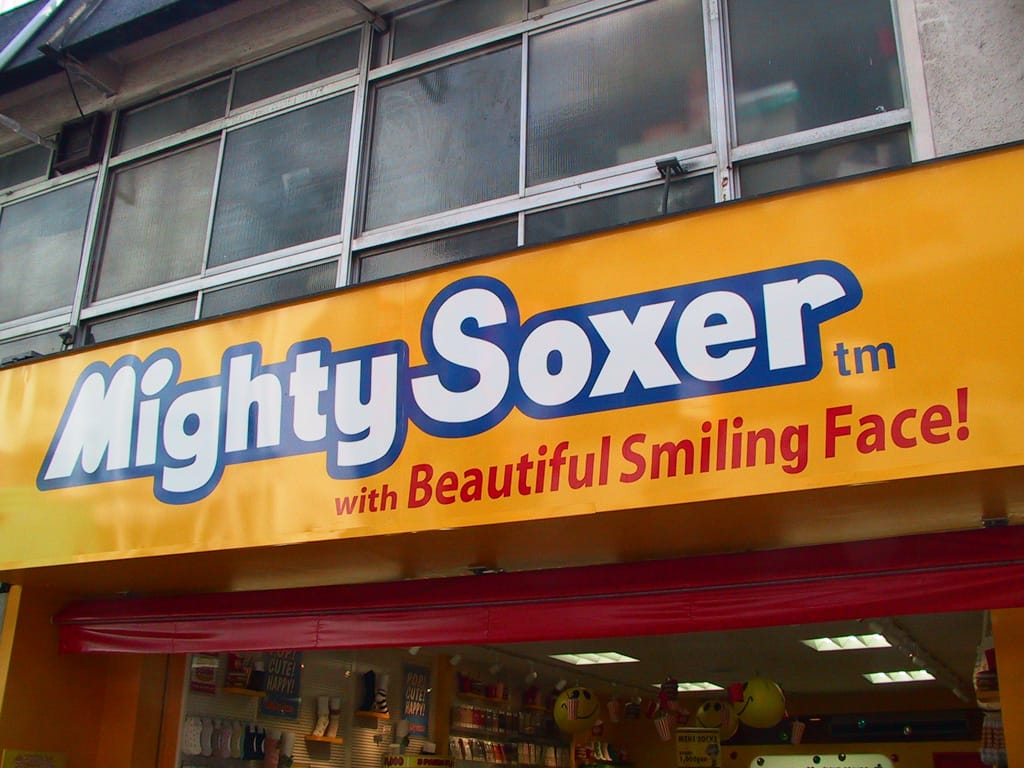 We soon ended up running down another road perpendicular to Takeshita, taking us out to another major thoroughfare. This is where we found the local post office so I could get out some money. (Though in my infinite wisdom, only got another 20,000 yen.)

Acquiring money, we were soon faced with a problem: needing to eat. All that walking had left us quite hungry. Picking a direction, we kept walking until something stood out. Ellesen chose the place — a tempura restaurant.

I thought it sounded a bit strange that this restaurant did only what I had previously considered to be an appetizer. At the same time, however, I knew these places existed. So it made it an interesting experience. Suffice to say, the tempura was exquisite, and very filling. Though that was mostly due to the rice, which seems to be a major component of almost every meal here. Mind you, it’s also mostly a filler.

Following our late lunch, we continued walking through the Harajuku area, heading (roughly) towards Shibuya. Ellesen hadn’t been there before, and it was a logical destination when you’re in the shopping mode. Well, when you’re looking for relatively low-priced things, anyway. If you’re well off, you’d probably want to hit Ginza. Not exactly what we’d had in mind.

We continued to hit stores of all types, but seemed to tend towards clothing and music stores. (The fact that this happens to be the majority of stores in the area is purely coincidental, of course.) Even surprising about the music stores was the number of stores dedicated to vinyl. A format considered dead as little as five years ago, it has made a very strong resurgence in the DJ world. There are a few large stores — not just small boutiques.

One store that was particularly interesting was Astroboy by Ohno. The designer had taken the image of Astroboy (known as Atom or Mighty Atom in Japan) and put it on shirts, pants, jackets, bags, hats ... pretty much everything except ties. You never actually saw a picture, though. It was almost entirely silhouette, sometimes the head, sometimes the full body. Prices were pretty reasonable, too.

One stop was to Mandarake, which Chris and I had been unable to see the last time we were in Shibuya. Arriving early enough, though, the store was still open. It’s in a large complex, and occupies the second basement. Why so low down? Because it’s probably the largest area they could find for the rent.

And it’s big. Really big. By far the largest comic store I’ve ever seen. It covers the entire spectrum of Japanese comic books, and not a single North American comic to be found. There are comics, lots of comics, like in the way Keanu Reeves would say "lots of guns". There are also lots of toys, all of them Japanese or created in Japan but familiar to the world. After looking at some of the prices, it made me wish I’d kept better care of my Transformer collection as a youngster.

Chris and Ellesen picked up a few books themselves. Neither of them can read Japanese (yet), but many Japanese manga don’t require you to be able to read them — the pictures say enough. Well, most of the time, anyway. One of Chris’ books was so demented (we couldn’t tell in the store as it was wrapped in plastic) that we could only hope the words would make more sense.

Above Mandarake was Inti — a video game parlour built by Namco, makers of one of my favourite games here in Japan: Virtua Cop 3. Needless to say, the three of us went in.

Right away, we saw a new game. Although completely in Japanese, it didn’t take much to figure out what you had to do. Chris used to play a game that could sense your body position and translate it into action onscreen. This one did something similar, only it wasn’t body position — it was the position of a (rubber) samurai sword. Chris was all over the game. It won’t belong before this is available for the Playstation 2.

Having been walking around for quite some time, we took a break at a bar called the Basics Of Airline Cafe — BOAC for short. For those of you unaware, BOAC also stands for British Overseas Airways Corporation (it now operates as British Airways), and is mentioned in The Beatles’ "Back in the USSR". Needless to say, the place had a certain airline motif. Except for the staff, all of whom were wearing "X-Men 2" t-shirts as part of some promotion (although we couldn’t figure out what). We hope to see the movie on Saturday when it opens in Japan.

As Ellesen had never had yakatori before, we decided to hit the restaurant Chris and I had been to the last time we were in Shibuya. Chris didn’t know where it was, but I did. Even though I can’t read road signs, the landmarks are everything.

Our meal was delicious, as always.

We left in good time and didn’t end up having to take a taxi from Chiba, like the last time we were in Shibuya. (The train trip from Shibuya to Tokyo station is deceptively long.) Upon arriving home, I pretty much passed right out.

I don’t know why I’ve been so tired lately. It’s rather annoying, actually. I want to stay up late, I want to do things I can’t do when I’m at home (and are being responsible). But maybe my body is telling me that I need sleep. I’m not really taking any days off and resting here. I’m getting the full experience. And with all the walking I’m doing, maybe a little sleep is a good thing.