After a few days of non-stop touring, a slow day is much appreciated, even though it wasn’t planned that way.

Chris was up before me, starting to clean up the apartment. It wasn’t messy by any means, but today we’re expecting the arrival of Ellesen, one of Chris’ friends from university and from film school. Supposedly, we’re going to have five people here on Sunday night, so there’s going to be a big effort to have enough room for all of us to sleep.

Chris also needed to finish up some work for his school — a flyer that will encourage people to come and take classes. Then we had to meet up with Naome in Chiba to pass off the disc with the design. All of this, and we planned to hit the National Museum of Japanese History.

By the time we left the house, it was 13:30. Based on instructions, we were to meet in front of the Starbucks in the Corridor Mall next to the Chiba JR Station. Problem: Just like in North America, there is the possibility for more than one Starbucks in the same mall. We stood in front of the one we thought was the only one for about 20 minutes before we got a hold of Naome, who was in front of a different Starbucks.

While we were waiting, we saw another great example of Japanese order. A bicycle was parked next to the Starbucks entrance, but inside the mall. (The mall has no outer doors, so it’s possible to cycle right through it without getting off.) Parking the bike there was a no-no, and the police officer who found it wasn’t too happy about it. After checking that it wasn’t ours, he wrote a ticket.

We finally met up with Naome and handed off the disk. While there, we met Ken, a New Zealander also teaching with Chris’ company. Then it was off onto the Keisei line (a privately-owned line separate from the JR lines) to try and get to Sakura, location of the museum.

The Seikei line is a local line, and makes a lot of stops. In fact, it made so many stops that we felt there wouldn’t be enough time to see the museum before we’d have to be back in Yotsukaido to meet Ellison when her train arrived sometime after 17:00.

At the stop before Tsudanuma, we abandoned the quest for the museum. Instead, we decided to try for the temple in Narita. We switched to the JR line and headed for Narita. It’s a fairly long trip. Although only three stops after Yotsukaido, the gaps between the stops become significantly longer.

Narita is the airport town. The airport itself is a fair distance away, but this is the first major stop from the airport. Hence, it’s very international. It’s probably the most western city in this part of Japan, after Tokyo. It’s also possibly the most stereotypically-looking Japanese city I’ve visited. Part of it sits on a hill, has the winding streets with high buildings on either side, with narrow little alleys. The area from the JR station to the temple is quaint and picturesque.

The Daihonzan Naritasan Shinshoji Temple complex is immense, covering many acres of land. It’s founding is also very old, started in the (western) year 940. The founding monk is entombed on the property.

After going through the gates, you cross over a small bridge over a small pond. On the other side is a fairly steep staircase going up the side of the hill. On the hill are many statues and stone markers. Whether they are graves of previous monks, I don’t know — the complex isn’t littered with explanation signs in English. (I do have to say, though, that with a bit of planning, this place could very easily became a UNESCO site ... that is, assuming it already isn’t.)

At the top of the staircase is the shrine. It’s a huge Buddhist-style building. In front is the ever-present incense burner, and to the right is a fairly large pagoda. Unfortunately, by the time we got there, the altar had closed for the day. Protected behind a sheet of glass, I couldn’t even take a picture of it (because of the glare).

We walked around the surrounding area a bit before realizing there was a terrace above the shrine. Up there were important cultural properties, including a votive hall, the tomb of the founding monk, and a couple of other buildings. Over the trees, the top of another pagoda — one with a golden spire — was clearly visible. This is the one we could see from the JR station.

The one is huge. It’s 53.1 metres tall. It’s such a beautiful building — perfect symmetry, vibrant colours, the sparkle of reverence. I’m sure it’s for something important, but I don’t know what. 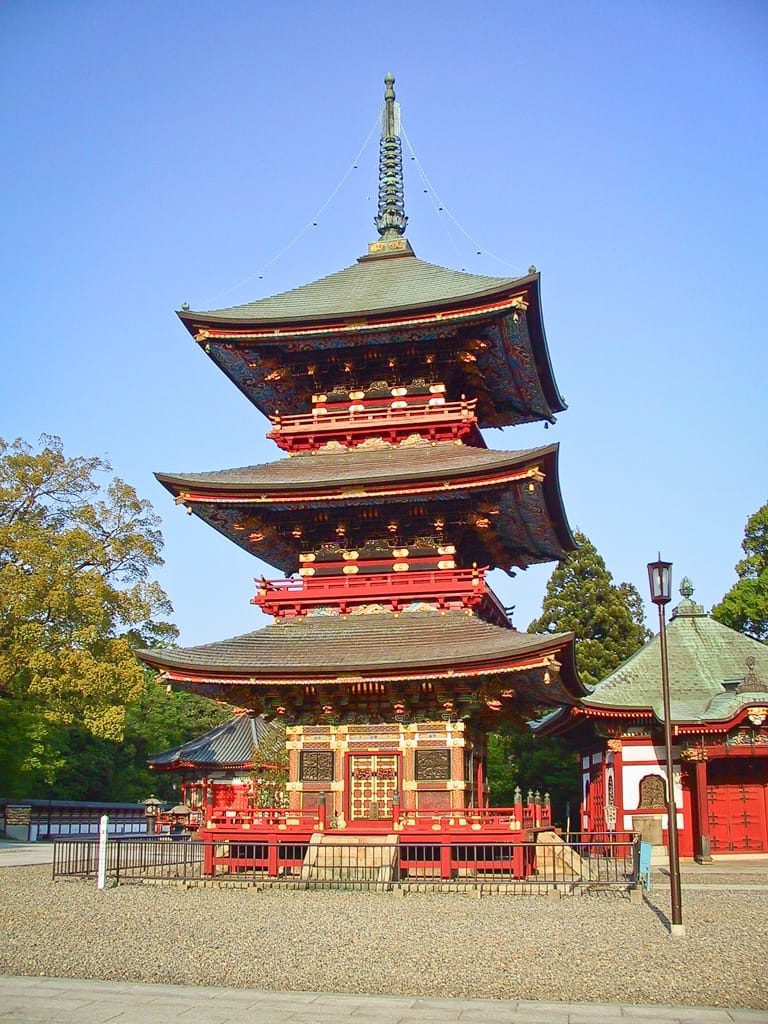 It was already just after 17:00, just when Ellesen’s train was due to arrive in Tokyo (she was coming from Morioka in northern Japan, on a Shinkansen). She still had to change trains and come to Yotsukaido, but we needed to head back and meet her at the station.

After a bit of a wait at the Narita station, we caught a very bumpy ride back home. Along the way, we saw a beautiful sunset. Sort of ironic, seeing as Japan is supposed to be the Land of the Rising Sun.

We were earlier than Ellesen’s train — she was still in Chiba awaiting the next train to Yotsukaido. This gave us enough time to quickly hit the video arcade.

I’m kind of beginning to feel like a local. The trips are becoming commonplace, and even the restaurant we went to was the same as the one Chris and I went to two nights ago.

Returning home a couple of hours later, Ellesen, Chris, and I talked well into the night. Well, they talked — I fell asleep. Even the assistance of caffeine from a small bottle of Coke didn’t help.

There are no set plans for tomorrow. "Tokyo" is the only word.