The Japanese have borrowed many concepts of rail management from North America. For instance, you will generally see words like "rapid" or "limited express" when you see train listings. And you’ll see them written in English as well as in Japanese.

But Japanese trains are far more efficient and run on very tight schedules. Unlike North America, you can time your watch to the trains here. If you think you might be a minute late for your train, you’re going to miss it. That’s how we missed the express train this morning — we resigned ourselves to having missed it. Probably for the best, too — it looked full.

Arriving in Tokyo, we headed from the JR train to the Maranouchi subway line. A couple of stops, and we changed to the Hibiya line. This would take us to within a short walking distance of the Tsukiji Fish Market.

What the heck were we doing at a fish market? This ain’t just any ordinary market...

Imagine a place where every single aquatic foodstuff for an entire country is bought and sold in mass quantities on a near-daily basis. Something so massively huge that it sucks up several city blocks. This is the Tsukiji Fish Market.

I’m not sure whether or not every single fish consumed in Japan comes through here, but it sure as heck looks that way. The traffic going through the complex is mind-boggling. Although the market’s day begins somewhere around 02:00 in the morning and finishes by 14:00 in the afternoon, the traffic at 10:30 is still a blur. The last of the larger trucks arrive to pick up thousands upon thousands of Styrofoam packing crates with fish — alive and frozen (or =-otherwise chilled) — and whisk them off to parts unknown. Hundreds of small gasoline powered carts whiz around seemingly without care for pedestrians. And there is always the constant drone of motor scooters and delivery bikes. 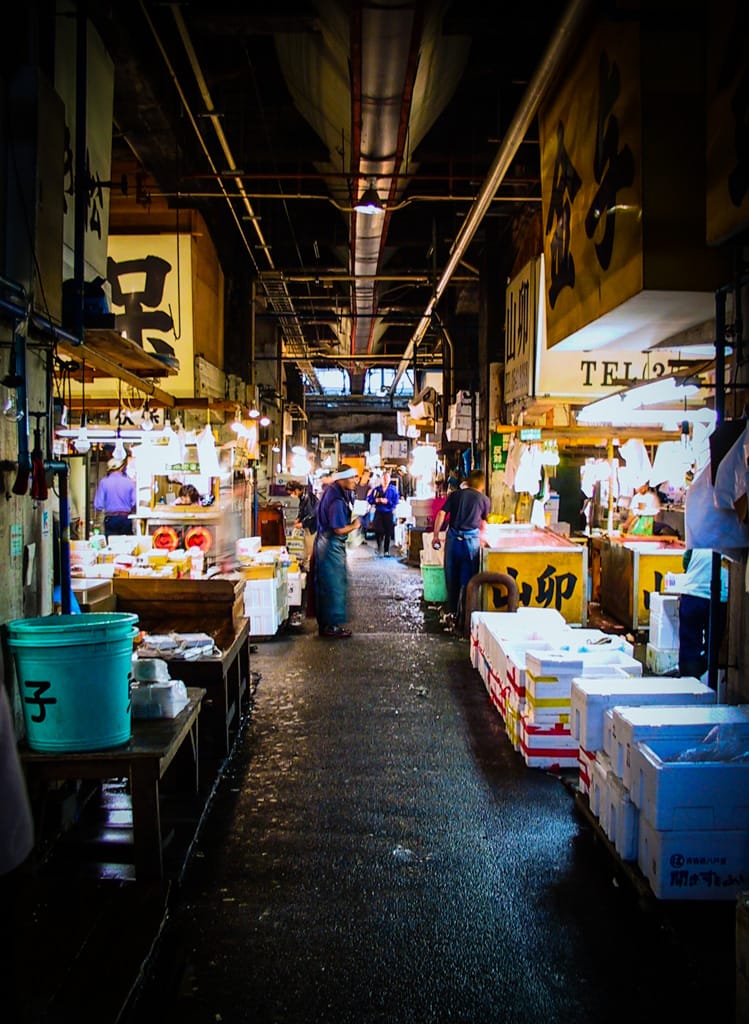 The market itself is open to the public — anyone can go walking inside, and you can buy direct from the wholesalers. Just be forewarned that you should go in with a pair of rubber boots. The floors are all wet, and the vendors don’t think twice about emptying the water from containers right onto the floor — and they don’t look before they tip. 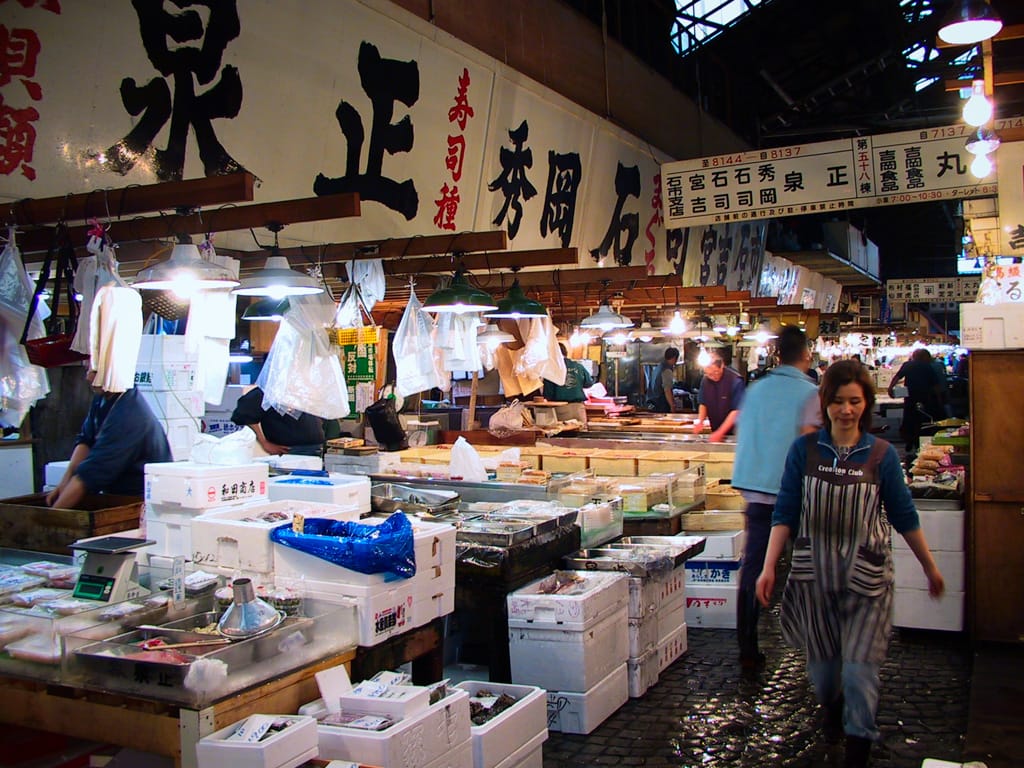 Now you’d think that the smell in this place would be overpowering — there’s nothing quite like the stench of rotting fish. There is no smell at Tsukiji — that’s how fresh the fish is. Nothing ever gets the chance to go bad.

By the time Chris and I arrived, there was not as much fish as there had likely been earlier in the day. The tuna auction, usually held at 05:00, was long over and most of the large trucks had carted the fish away. We found only two hamachi (yellow-tail) tuna remaining.

Think of any fish. Actually, pretty much anything that lives in the water and would be consumed in reasonably large quantities. Chances are, it’s in there somewhere. Squid, cuttlefish, red snapper, orange roughie, conch, abalone, scallops — they’re all part of the seafood currency the market deals with every day. It’s one of the reasons why seafood in Japan is so good.

To find out how good, Chris and I decided to partake of one of the nearby sushi bars to find out what uber-fresh sushi was like. We didn’t walk into the first place we saw, though — we ended up flipping a coin to choose.

The place was small, having barely 15 seats. At peak, the restaurant is probably packed with patrons from the fish wholesale industry. By the time we got there, it was nigh-empty — only one person. Chris and I took our seats, and began to figure out what we were going to eat.

Chris engaged in a conversation with the chefs, who suggested a set. Deciding it sounded like a good idea, we sat down to watch our meal being prepared. It was served in a wet banana leaf, with a heaping of pickled ginger, a large cup of fresh green tea, and a bowl of miso soup with fish.

The experience was amazing. Chris carried on a competent conversation with the staff, telling them about some of our experiences (including our somewhat-failed attempt to see Mount Fuji yesterday). We were rewarded (I think) with hand-rolls for our troubles.

We were not full, but satiated when it was time for us to leave. It was raining, so a quick departure wasn’t possible. A quick stop to one of the stalls in the area provided two umbrellas. (A note to anyone who gets caught in the rain at Tsukiji — don’t buy an umbrella there. Sprint a block away to the Outer Market and buy one there at half-price.)

We headed down the road Outer Market and perused the stalls. (Apparently, there’s a great 24 hour sushi restaurant in there somewhere.) Then it was towards the subway station we’d arrived at. But not before one little distraction...

Returning to the station, we boarded the Yamanote line again, this time for the Hamamatsucho station. This is where you’ll find Tokyo’s main bus terminal, which is where we would take our bus tour of Tokyo.

Being a little early, Chris and I did a little exploring. We found our way to the Observatory atop Tokyo’s World Trade Center (not to be confused with the late WTC in New York). From here, we were provided excellent views of the greater downtown Tokyo area. Or rather, we would have been, had the weather been a bit better. But we did pretty well, all things considered. 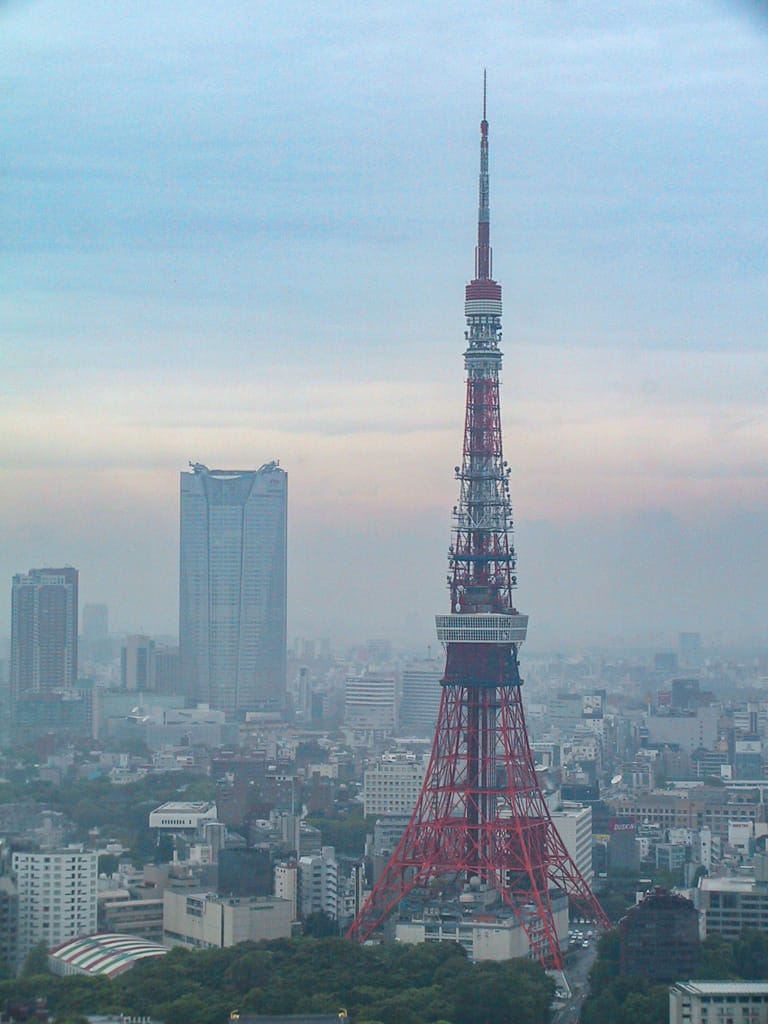 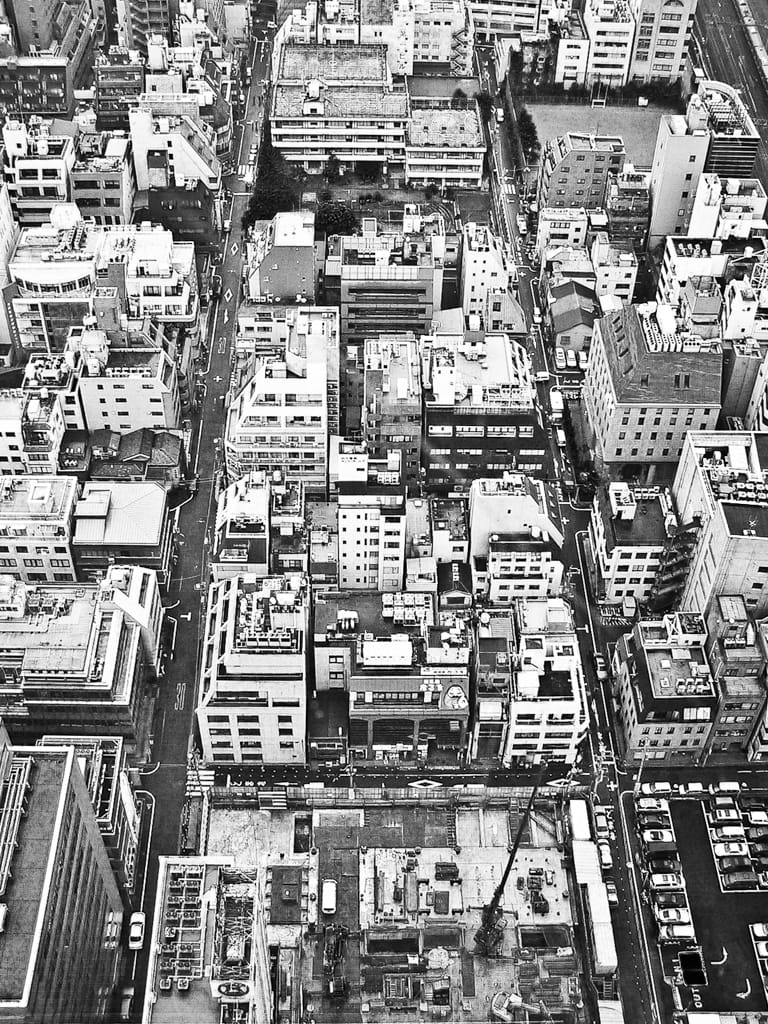 Chris and I just laughed at the coincidence. The staff in the Observatory smiled when they saw us again.

The trip back up wasn’t a total washout — Yoshi did tell us more information about Tokyo than we knew when we were last up there.

One interesting fact that kept coming up was how much Tokyo had once been controlled by Shogun. In the days before Imperial control of all of Japan, large portions of the country — especially the eastern portion — was ruled by shogun, not the emperor. Back then, Edo (now Tokyo) was ruled by powerful shogun.

When Matthew Perry arrived in Japan and arranged to allow American ships to dock in Tokyo harbour in the 1860’s, the shogun had no choice but to accept the "offer" of the more powerful American naval vessels. Soon, the Europeans were doing the same thing, and the shogun appeared almost powerless. The samurai voted to overthrow the shogun, and install the Emperor in his place. To facilitate the change, the Emperor moved from Kyoto in 1867 to Edo, and renamed it "Eastern Capital", or Tokyo.

Many of the original buildings from the shogun era still exist, including a shrine at the foot of Tokyo Tower, the Zojoji Temple, the Hama-rikyu Garden (a former hunting ground for the shogun) and the Imperial Palace complex (appropriated by the Emperor in 1867).

The bus tour began once we got back downstairs. Our first stop was at the main gate of the Imperial Palace.

The Imperial Palace grounds are immense, but not as large as they used to be. Today, the outer moat is gone, though one still exists on the outside of the main wall. The main wall has been divided to allow traffic through the palace grounds, though one road is blocked for use only by the Emperor.

The Palace is closed to the public except for two days a year — 2 January and 23 December. Otherwise, you can only see the Palace from the outside. But even those glimpses are of a world far older than anything North America has to offer, and of a culture in ways alien to my own,

After snapping a large number of pictures, we headed off to our second stop at Asakusa Kannon Temple. The route from the Imperial Palace to the temple would also take us through the Ginza district and also the Akeharbara district.

According to legend, the temple dates back to the (western) year 628, when two fishermen found a statue of Kannon in the river. (Kannon is an image of Buddha.) The statue became the central point for the monastery, which was built around the original shrine over the next 1,000 years. Today, the statue is said to still exist, though it is well-hidden. Not even the monks see the statue. A previous emperor is said to have sent four people to prove that the statue still exists (the Emperor himself did not come).

As our guide then tells the story, the four people then died. (Of course, she didn’t say when...)

The Asakusa Kannon Temple is a little strange. It’s still active, but has been blended with a strange commercialism. Leading up to the temple from the road is the Nakamise Shopping Street. It exists with the boundaries of the temple grounds, and basically forms an alleyway leading up to the temple. I don’t know if there’s any direct connection with the temple itself, but I suspect there’s some sort of mutual benefit.

The temple it quite an interesting place. Although protected for tourists (or for pigeons, I’m not sure which), it still retains its mystical qualities. If you’ve been to a Buddhist temple before, you’ll know what I mean. If you haven’t, you should visit one. 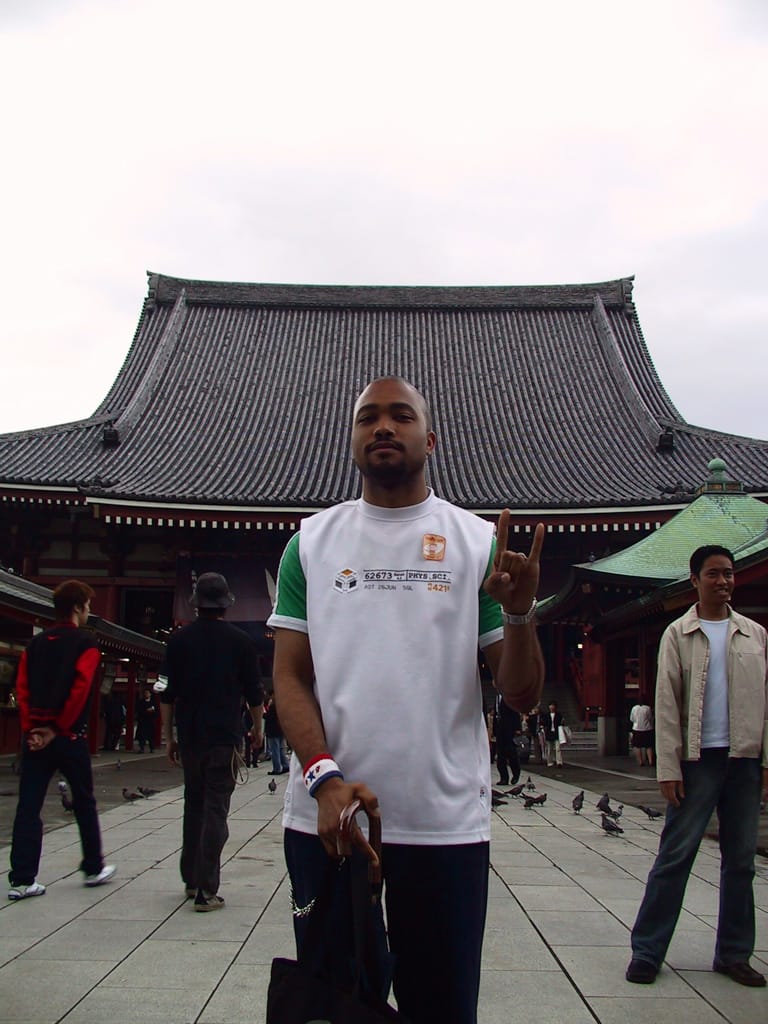 We couldn’t stay long, as we had to rush to get on our boat for the cruise down the Sumida River.

The cruise isn’t particularly riveting, but it does offer an interesting point of view. We cruised along for about 45 minutes, passing buildings and under bridges, before entering the edges of Tokyo Bay and ending at the cruise ship dock. It was back on the bus, back to the station, and then back on the trains to Chiba. 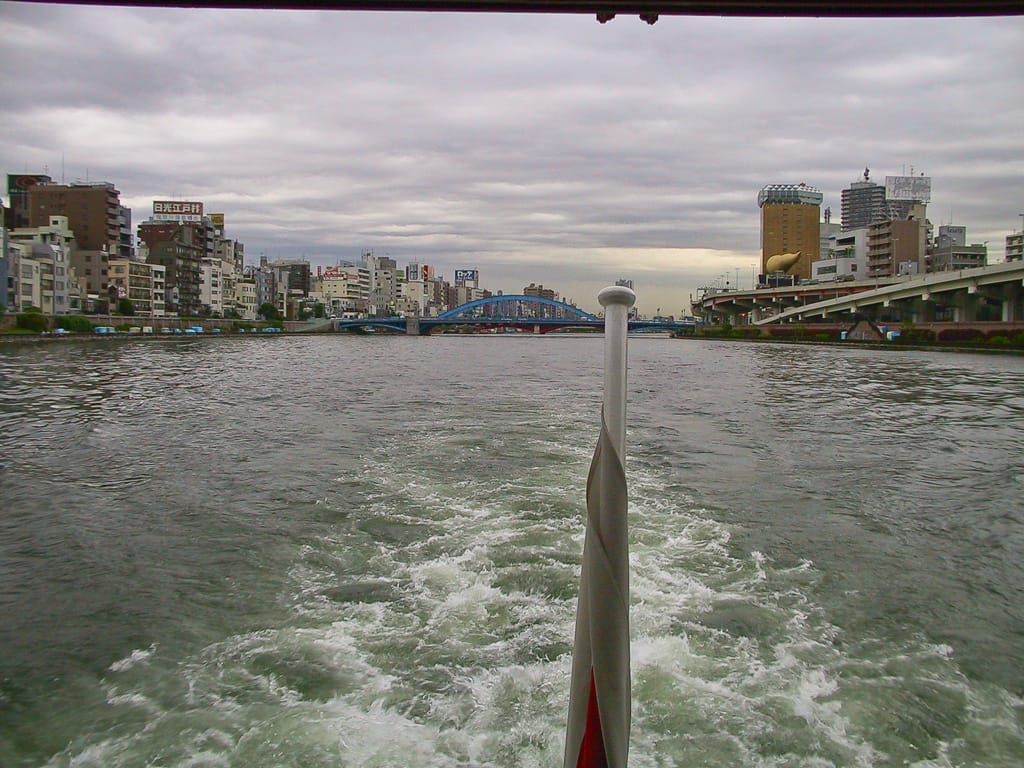 It’s been a long day. Tomorrow we’re playing it light — just a visit to the Natural History Museum.

Which probably means a much shorter entry...