We woke up relatively early this morning. For anyone on vacation, that’s before noon. For us, it was around 09:00. The goal today was Mount Fuji, about an hour south of Tokyo.

An hour by bullet, that is.

Following the usual rise-and-go routine of the morning (shower, shave, etc.), we made a run to the 7-11 before heading to the train. I know it sounds really strange to say we’re going to a 7-11, even when I’m in very urban (almost rural) Japan. One thing you’ll find there is there are a lot of American chain stores and restaurants: Starbucks, AM PM, Lawson’s (which I hadn’t heard of before coming here), Subway, the ubiquitous McDonald’s, 7-11, Red Lobster, and even Denny’s.

In most cases, though, the store/restaurant is very different than in North America. For example, you won’t find pretty much any North American food in a 7-11 — it’s all Japanese food, although along similar lines that you’d find in a North American 7-11. (And beer. You don’t get that in Canada.) One of the neat things are these little triangular rice cakes wrapped in nori (seaweed), usually with some sort of extra flavouring, like salmon, pork, and so forth. They’re amazing for breakfast.

The really cool thing about these triangles is in how they’re packaged. The seaweed needs to be kept dry, while the rice needs to stay moist. This is done by using the most elaborately-arranged plastic wrapping that I’ve ever seen. Once you see how it works, it’s truly elegant, though it is a little confusing at first.

Upon arriving in Tokyo, we made our way to the Shinkansen area. The Shinkansen are the legendary Japanese "bullet" trains. They run at extremely high speeds (about 250 km/h), and are extremely convenient when getting between cities that are close enough not to fly, but far enough that driving is just inconvenient. (Of course, if you don’t have a car, then the train is all the better.) They’re not the fastest trains in the world (that record is held by France’s TGV), but they’re no slouches, either.

The Kodomo Superexpress runs from Tokyo terminal to Shin-Osaka, making about 10 stops along the way. The distance is quite far — probably about 400 kilometres or more. (That’s a guess, as I have no maps or figures.) It’ll do the trip in about two hours, including the station stops.

The Shinkansen lines are separate from the other rail lines used for regular commuter trains. The slower-speed trains use jointed rail (lengths of rail linked together with plates). This is fine for slow-speed travel, but not for high-speed passenger travel. The gaps between the rail lengths would cause shuddering in the train as it slammed across them. The rails would deform and the wheels of the train would be damaged. So much more expensive (and labour-intensive) continuous welded rail must be used instead.

The Shinkansen itself is like an airplane. The seats are built roughly the same way, but are a little lower (assumedly for the smaller stature of the average Japanese person) and have no seat belts. The train runs so smoothly that you have no need for one.

The train pulled out of the station at about 12:15. It accelerated to about 100 km/h within a very short distance of the station, but didn’t go much faster until we were outside Tokyo city limits. This wasn’t because of safety — this was because the tracks had to follow a very curvy path before being allowed to run straight. Shinkansen, like any high-speed train, prefers straightaways over curves.

You can’t really feel the acceleration of the train, like you would an airplane taking off, but you do notice the change in speed. I’ve heard from several people who have ridden the TGV that the movement is noticeable, but only if you’re paying attention. Otherwise, the motion is almost magical.

Soon, the countryside was whipping by at speeds that would make my eyes hurt if I tried to follow something that was fairly close to the train. The city quickly gave way to smaller towns and villages. Farms, old houses, small factories, rivers ... the rural life passed us by faster than the time most rural folk give thought to the trappings of city life.

The plains of the coast gave way to mountains, and the train started darting in and out of mountains. I think there are more tunnels on the Kodomo line than there are in the entire Canadian Pacific Railway system. High speed trains don’t go over or around mountains — they go through them. And sometimes so fast and frequently, you can actually start to feel your ears pop from the constant pressure change.

Just outside of Mishumi, we caught our first glance of our quarry — Mount Fuji, off the in the distance. It wasn’t quite what I expected. The "traditional" crown of white snow was little more than stripes, assumedly from the spring melts. I can only assume the white cap is only in winter. I snapped pictures from the train as we passed through.

We had been told by many people that the place to see the mountain was in Shizuoka. We stayed on the train until we got to the stop. According to maps and photos, we could go a short distance and obtain some very nice photos. However, there was a minor problem ... we couldn’t see the mountain.

Chris enquired, and we were told that we were better off going back one stop on the local Tokaido line to obtain a better picture. Hopping on the local train, we found the situation not any better. Apparently, we had run into Fuji’s most famous problem. According to Chris’ friend Shinichiro, Mount Fuji is very shy. We had just found out how shy it was.

We returned to Shizuoka, and took the next Shinkansen to Shin-Fuji, which apparently was the best place to see the mountain when the weather wasn’t cooperating. By the time we arrived in Shin-Fuji, clouds had almost entirely obscured the mountain. Living near mountains myself, I know how volatile the weather can be. Figuring it wasn’t quite worth leaving just yet, Chris and I decided to grab a bite to eat and hope the weather clears.

Not wanting to stay at the station, we went in search of a restaurant. An initial look around the station wasn’t terribly promising. So Chris enquired about the location of downtown Shin-Fuji from some bus drivers. They laughed incredulously.

"What do you do for fun?" Chris asked.

Not wanting to take that for a literal answer, we decided to find out what Shin-Fuji was all about. Heading south of the station, we found our way to the corner of the major street near the station and what appeared to be a local highway. We followed it for a couple of kilometres before deciding to turn north and wander through a neighbourhood to see what we could find.

It seems that the bus drivers hadn’t been kidding — there isn’t a heck of a lot of anything in Shin-Fuji. All we found were varying states of nothing. All we got were stunned looks from some of the locals. I mean, what were a pair of gaijin (one a tattooed black man) doing wandering through a neighbourhood like theirs? Had they become lost from the train?

We ended up back at the station, completely empty-handed, and hungry. North of the station wasn’t any better, although we didn’t walk even remotely as far before giving up. Instead, we caught the next eastbound Shinkansen to Tokyo. The trains’ gently motion soon put me to sleep. 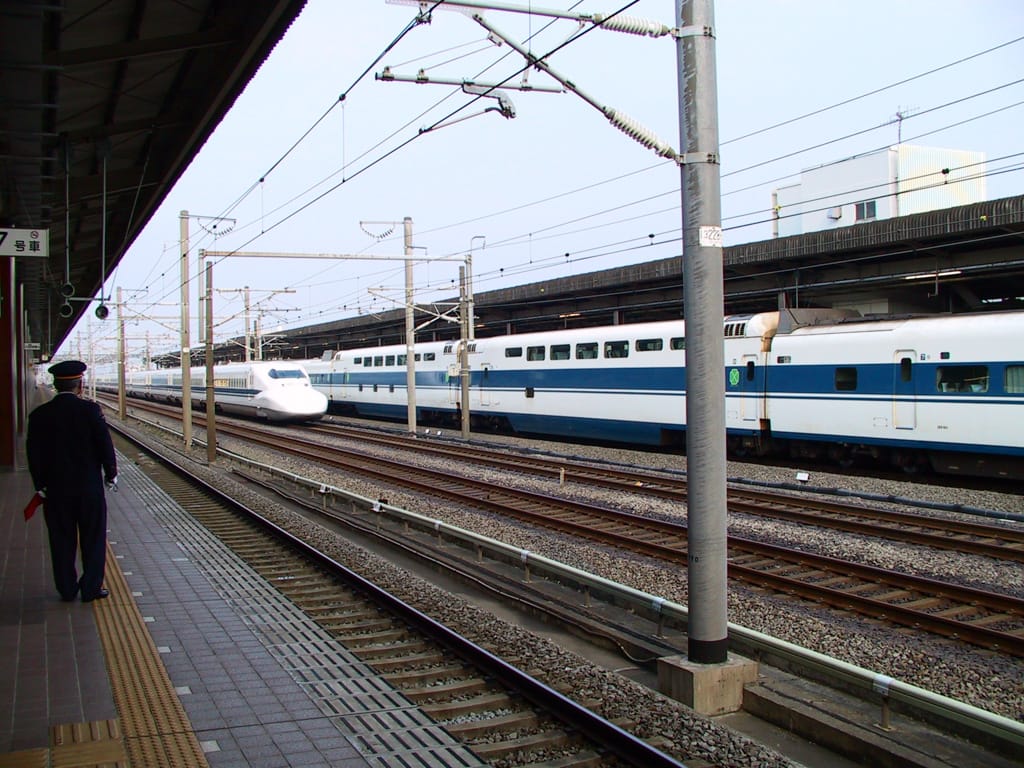 We got off in Chiba, rather than continue all the way to Yotsukaido. Chris wanted to pick up a gift for Kaz, and we would get something to eat before heading home for the night. After our stop at Yodobashi Camera, we hit a restaurant that features izakawa-style food, which is basically the Japanese version of pub food (though much better prepared and probably a lot better for you, too).

So far, I’ve had several varieties of Japanese food, and I like them all. Even the dreaded natto. The best part is that almost all of it is very good for you, too. Japanese cuisine, even the stuff that’s considered "fast", is so much healthier than North American food. I can only guess how much weight I could lose here from eating better. I only wish such foods were readily available in Canada.

It’s an odd thing, really. The Japanese have some of the best diets in the world, but simultaneously are some of the heaviest smokers I’ve seen in years. The dichotomy of healthy/unhealthy habits is quite astonishing.

We were back in Yotsukaido before 22:00 — Chris has some design work to do, and having an early evening for a change sounded good.

Besides, it gave me a good excuse to hit the 7-11 for dessert. A couple snacks, a bottle of Fanta Fruit Punch, and we were back to rest and relax for an evening. Tomorrow, the tour of Tokyo!